At this year's Autocar Awards, the V8 super saloon stood out as a used car market gem that enthusiasts still lust after today
Open gallery
Close

Heavens above, the M5 is awful. It’s not especially fast, it’s certainly not fun to drive and it’s not much to look at. Relentless, drab and morose, it just goes on for mile after mile with barely a likeable facet or redeeming feature, pummelling your enthusiasm pancake-flat.

The section between Quedgeley and Tytherington is downright ugly, even with a few Welsh mountains decorating the horizon. If it wasn’t for the split-level stretch just south of the Severn crossing (and the world-class sausage rolls at Gloucester Services), this might actually be the most boring motorway in Europe. There, it’s out of my system now. I feel better already.

A car like the BMW M5, however? Well, that’s definitely one way to make the other M5 seem decidedly less awful. The late-1990s-to-early-2000s-era, third-generation E39 M5 in particular was hailed as one of the greatest and most versatile driver’s cars BMW has yet made when Autocar staffers were asked recently to nominate and justify the used car they had been daydreaming about for the past 12 months. 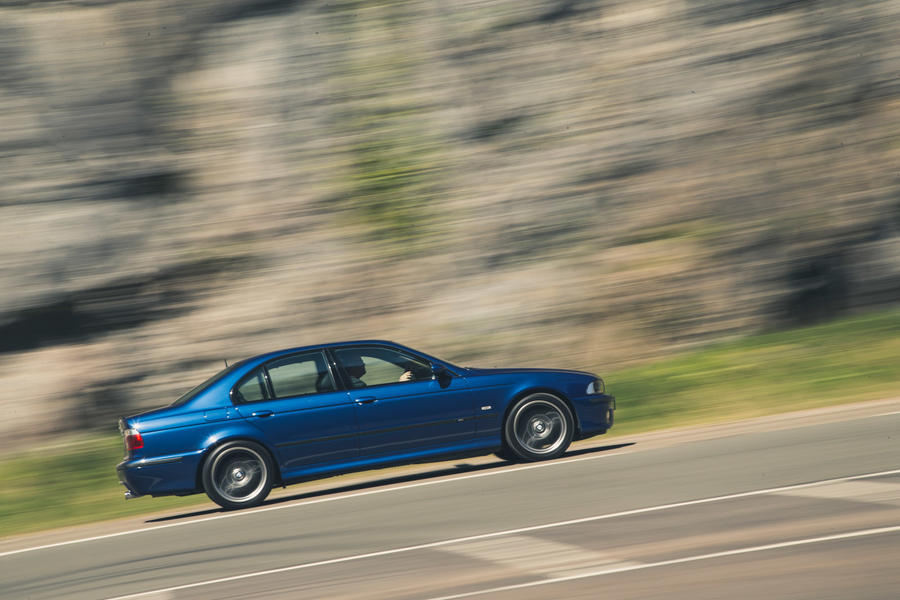 We voted for a winner and the M5 won. My own prize was this fine excuse to spend a long day in what might be the single loveliest example of this mercurial, two-decade-old ’bahn-stormer that exists anywhere in Britain: BMW UK’s immaculate ‘heritage fleet’ press demonstrator.

Naturally, I took it to the other M5 and then to the nearest thing we have to a Himalayan fell: Cheddar Gorge – although I could just as easily have gone to Milton Keynes or the Basingstoke gyratory and been no less smitten. The E39 has a reputation that might actually discourage you from driving or buying one as likely as motivate you. It is, some say, the greatest M car there has ever been. But what if they’re wrong? If, like me, you’ve wanted one since first laying teenage eyes on it in pages of this very magazine in the late 1990s, would you really want to know?

Greatest or otherwise, what the M5 seems like when you finally drive one is, rather predictably, just a car. It’s a mere mortal, a product of its time, when the template for the modern German mega-saloon was still very much being formalised and forged. Despite its revered status, however, the E39 is, in some ways, a surprisingly humble performance car, which probably makes it all the more likeable.

It’s a wonderful thing, though, I’m pleased to report. So unlike its modern antecedents in its simplicity, versatility, mechanical authenticity and deep-rooted analogue charm. And yet not unlike them at all in its ability to pin those neat little door mirrors back and then hurl itself into the middle distance at a rate that makes it feel more than contemporary enough, thank you very much. For the avoidance of doubt, some 23 years after it was first introduced, you still don’t need a faster family saloon, I assure you. 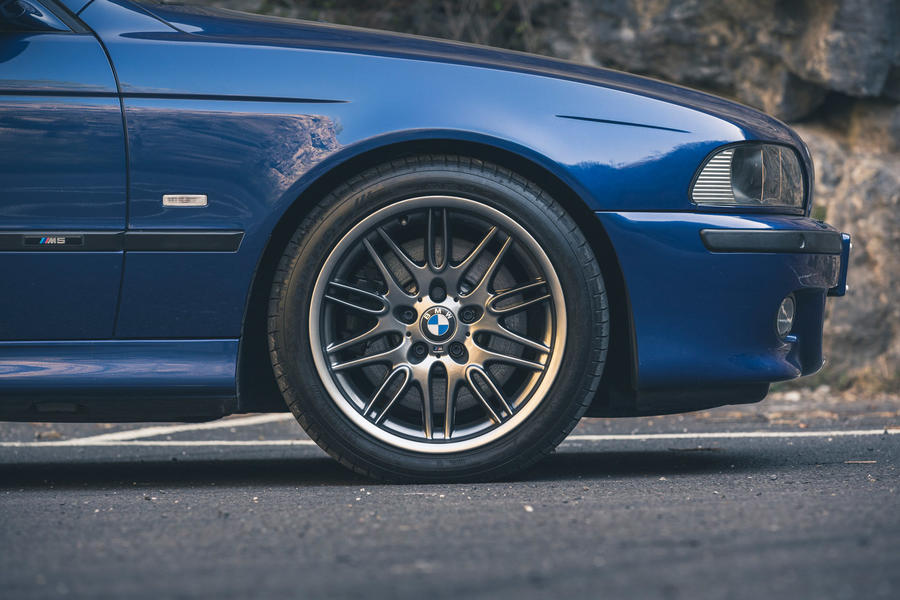 Let’s cast our minds back to March 1998 and a certain Geneva motor show unveiling. The world’s defining super-saloon remained the Lotus Carlton. Nothing – save for a few four-door, tuning-house unicorns – had gone close to beating its 377bhp.

Fast saloons still generally had six-cylinder engines, especially those made by BMW. But Munich’s M division E39 lays waste to the rule book. It had an all-new atmospheric 4.9-litre V8 making 394bhp, at a time when the equivalent Audis and Mercedes struggled to top 350bhp. It had a rolling chassis that, by modern standards, actually looks quite ordinary: mainly stock E39 5 Series axles (admittedly with respecified coil springs, dampers, anti-roll bars, mountings and wheel carriers), recirculating ball steering and a mechanical limited-slip differential. Nothing clever.

And yet the appearance of this car was undoubtedly the moment when the gun was fired on a horsepower race that’s been rumbling on among the predominantly German ruling powers of the fast executive car firmament ever since. For better or worse, this was the car that started it all. Like the suspension specification, the car itself looks simple and understated but still darkly purposeful. There are no superfluous carbonfibre aerodynamic addenda, nothing to make you feel like a wally. The perfect, shrink-wrapped, fuselage-like proportions of the E39 are a considerable factor in the car’s visual appeal, it must be said, but the details also help. Our late-model test car, with its ‘corona ring’ headlights (we should probably pick another name for those today, shouldn’t we?) had ice-cool daytime-running lights before DRLs were a thing.

So much about this car appeals simply because it was the daddy of all E39s, itself one of the finest luxury saloons that any car maker has made before or since. It has epic built-in quality. Doors that close with a heftier ‘whump’ than those on a Swiss high-speed train, double-glazed windows and lovely over-engineered details such as the beautiful mechanised ashtray that drops away into the transmission tunnel as you swing its lid closed. They could have just made a deeper ashtray, sure, but that wasn’t how BMW rolled in the celebrated Wolfgang Reitzle era. 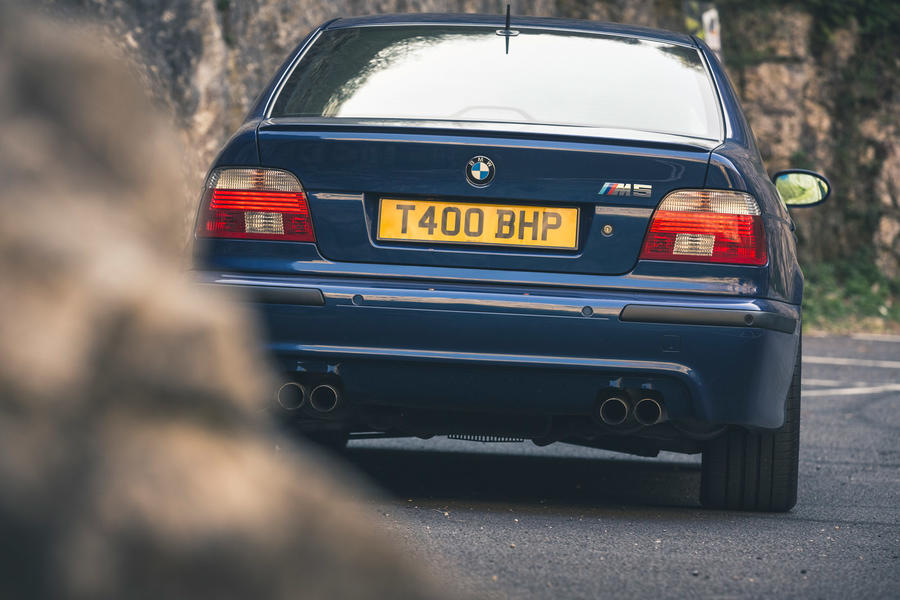 M division’s own little touches enrich that cabin just enough: the illuminated gearknob, those supremely clear instruments and two-tone leather upholstery that stretches out so widely and seems to mix immaculate unborn buffalo hide with grumpy, decrepit rhinoceros just for the shock value. Well, it was the 1990s.

Slightly heavy and springy-feeling controls make this car feel alive, connected and immersive to drive, in ways that modern M cars simply no longer can. They like a firm hand and a confident timed input, reminding you of what it’s like to think not just about what you’re doing with your extremities but also how you’re doing it. The car’s manual driveline does that particularly clearly. You’ll often double tap the clutch to give it an easier time, and always match the speed of crankshaft and driveshaft the old-fashioned way on downshifts. Meanwhile, a little out of pure respect, you squeeze both brake and throttle like you’re taking the stone out of an avocado: you never stab away at them like you might in a modern performance car. That’s the biggest difference 20 years make. The V8’s audible presence is surprisingly delicate and reserved at ordinary speeds, but it raises its voice to a brassy, mellifluous yowl beyond 4000rpm. It is always so responsive, though, and the elastic-feeling head of steam it builds on the way to full power on the far side of 6000rpm lives long in the memory.

Unlike so many overblown modern equivalents, the M5’s chassis and steering work in most settings. It feels big but not huge; the suspension copes with narrower single carriageways with no little fluency, provided the surface doesn’t get too rough or the inputs too spiky. The steering, meanwhile, is pretty moderate and measured but wellweighted and consistent. There’s just a hint of squidginess to the take-up of the recirculating ball set-up that’s detectable as you load it up for a corner, but thereafter it’s impossible to fault. The fairly relaxed but super-intuitive gearing it has suits the car’s slightly lazy, classic front-engined, rear-driven, long-wheelbase handling character like a glove.

But as good as that handling balance is, it’s the M5’s wonderfully taut, stable and composed motorway ride that is its crowning glory. The suspension filters a little at speed and is always comfy and supple, but it keeps the car’s mass under effortless and eerily close control all the time. This car must have felt like Concorde when it arrived on our roads in 1999. For this one to feel as poised as it does, when closing in on 20 years of age, is nothing short of remarkable.

Now, of course, the only thing that’s worrying me is how different the average 20-year-old BMW M5 might feel to one that’s been so lightly used and, at the same time, maintained without regard for cost at the hands of the company that made it. I suspect the answer to that question is ‘quite a lot’. One day, I certainly hope to find out, so here’s to there still being unleaded in the petrol pumps, and mountain goats in Cheddar Gorge, when I do.

Have we persuaded you to buy one?

The cheapest E39 M5s currently provide an entry point for ownership at around £15,000, while the priciest command values of £40,000 and above. The cheapest are always likely to stay cheap, but if you get a tidier one now and look after it, there’s every chance it will look after you and be worth more than you paid for it in years to come.

Facelifted cars, which arrived in 2000, brought those ‘corona ring’ headlights, front parking sensors, a slimmer steering wheel and white-on-grey instruments, but they’re also prized for the under-bonnet revisions that bolstered the car’s reliability.

Whatever age of car you buy, even healthy ones will get through a litre of engine oil every 1500 miles or so. Most cars need a fairly costly suspension refresh somewhere between 60,000 and 100,000 miles. If the one you’re looking at has noisy cylinder heads, it could be because of a loose timing chain tensioner (a cheap fix), or it could be because the Vanos timing units need changing (not so cheap).

Great car. I still have a 530i M sport (auto) but the M5 is the daddy. Rack and pinion steering for the I6 e39 V8 front end based on the e38 7 series with V8 engines. Such a nice car you wonder how much time they spent designing this thing, I should probably move on at some point, but no plans to do so especiallly as it's ULEZ compliant which seems fitting that such a great car when many more modern vehicle won't and that says a lot about the E39 in general.

ps Don't think that the only E39 to get is an M5, they were all great cars provided you know what you are after. The well specced 540i (with sport package) for example might be a good equivalent if you want that V8 vibe without the economic tears and also steptronic auto is then possible, which may be a better choice for these times in any case.

scrap@, I also had a 530iM sport with a manual box,and as you say a great car, a time machine, you could do 200 miles and felt like you'd only done 20 miles, it was that good.

I nearly bought one in 2007, but I opted for M3 (E46), I think it was equally as much fun as the M5, especially because it had a manual gearbox, would I have either today?, yep, you betcha!