BACK TO ALL NEWS
Currently reading: Autocar Awards 2021: all the winners
UP NEXT
Fisker goes radical with Pear EV SUV

The 2021 Autocar Awards top accolade, the Issigonis Trophy, is awarded to Hyundai Motor Group chairman Euisun Chung, in recognition of the incredible contribution that he and the firm have made to the global automotive industry.

Named after the legendary engineer and inventor of the Mini, Sir Alec Issigonis, the Trophy is awarded by Autocar to an individual who has played a significant role in helping to shape the future of one of the world’s largest industries. Chung has overseen the Hyundai Motor Group, whose brands include Hyundai, Kia and Genesis, transform into one of the world’s largest and most innovative car manufacturers, at the forefront of developing new technology including electric and hydrogen powertrains, connectivity and digital systems.

Autocar editor-in-chief Steve Cropley said: “In the last decade the Hyundai Motor Group has grown into one of the world’s leading car firms, and chairman Euisun Chung has been key to that transformation. We’re proud to award him this year’s Issigonis Trophy to recognise his achievements. The transformation made by the company is unmatched in the industry in recent years.

“While Hyundai and Kia were considered unexciting budget brands with limited market share just a decade ago, under Euisun Chung’s leadership they have made incredible progress, winning market share and customers with cars that are the match of any mainstream rival. The Hyundai Motor Group has expanded into performance cars with Hyundai’s N division and the premium market with the new Genesis brand, and become a true industry leader in both electric and hydrogen-powered cars. It is no longer trying to catch up to rivals: now other car firms are chasing it.” 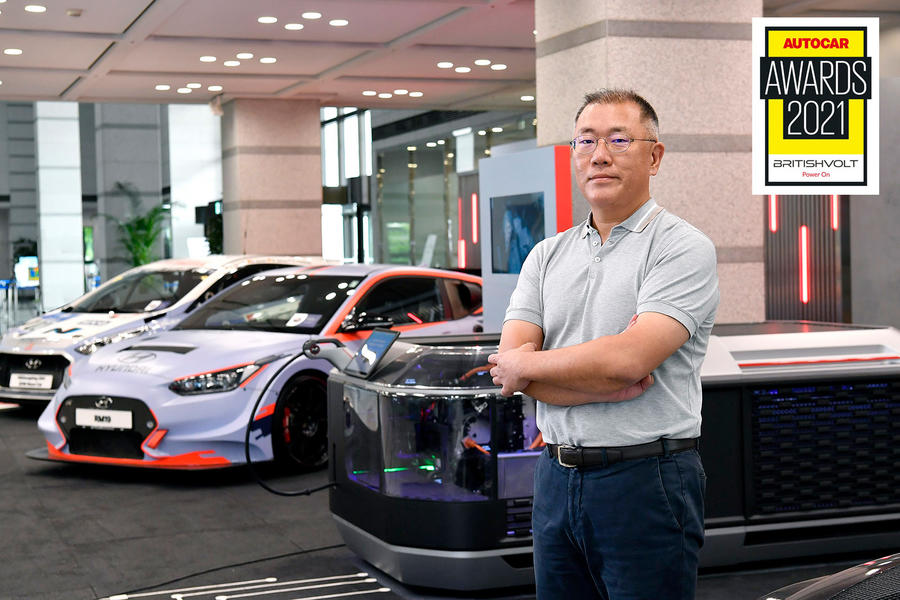 The Autocar Awards takes a different approach from many in the industry, not just celebrating the greatest cars of the past twelve months, but highlighting the people who made them, and who are responsible for driving us forward.

Sponsored by electric car battery producer Britishvolt, this year’s event shone a spotlight on the technical achievements and inspiring leaders that helped see the motoring industry through an unprecedented year of change and upheaval.

The Editor’s Award recognises seven-time Formula 1 world champion Sir Lewis Hamilton for his achievements both on and off the race track. Hamilton has become an advocate for causes such as environmentalism and the Black Lives Matter movement, using his high profile to help promote positive change in society.

Autocar editor Mark Tisshaw said: “As the most successful driver in Formula 1 history, Sir Lewis Hamilton was an obvious choice for recognition at this year’s Autocar Awards – but we were just as impressed by his achievements outside of his Mercedes-AMG car. Hamilton has used his high-profile to speak out on a number of important social issues, and hasn’t been afraid to stand up for what he believes in, even if that might attract criticism from some.” 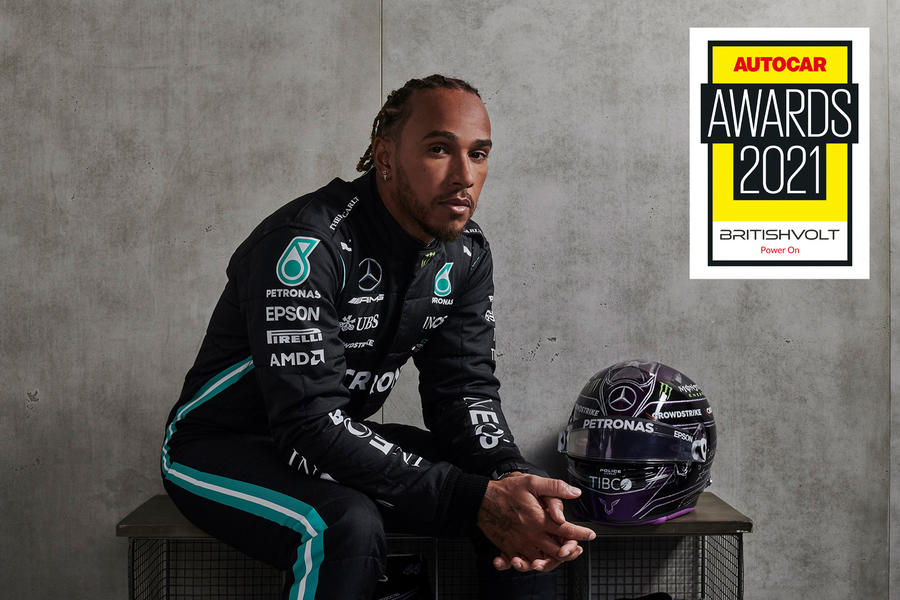 The Sturmey Trophy for technical achievement, named after Autocar founder Henry Sturmey, was given to Polestar CEO Thomas Ingenlath for his leadership of the fast-rising electric car brand that is owned by Volvo and Geely. 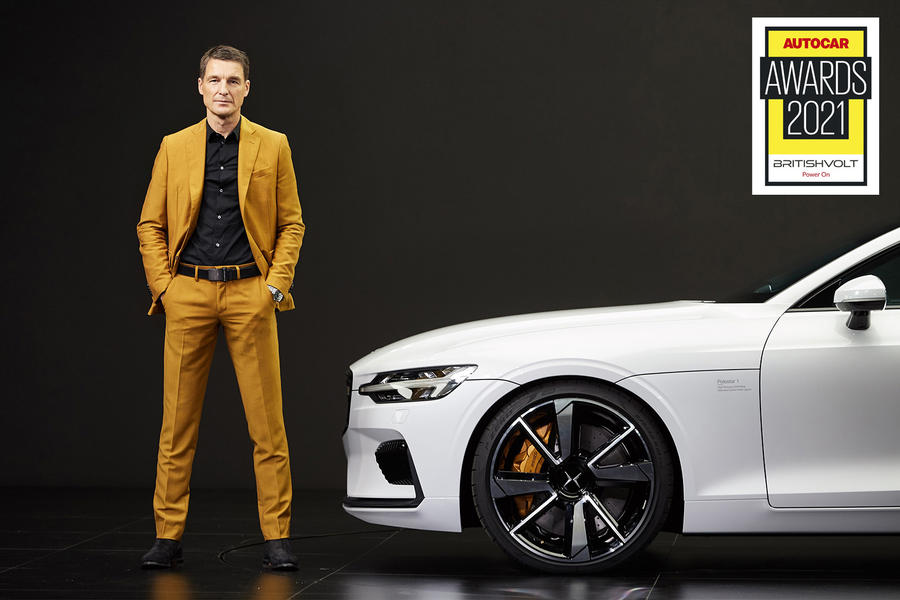 The Mundy Award for Engineering, which is awarded to a standout engineer for their contributions to the industry, has been won by Aston Martin’s Matt Becker, for his work across the brand’s portfolio, but in particular the game-changing DBX SUV. 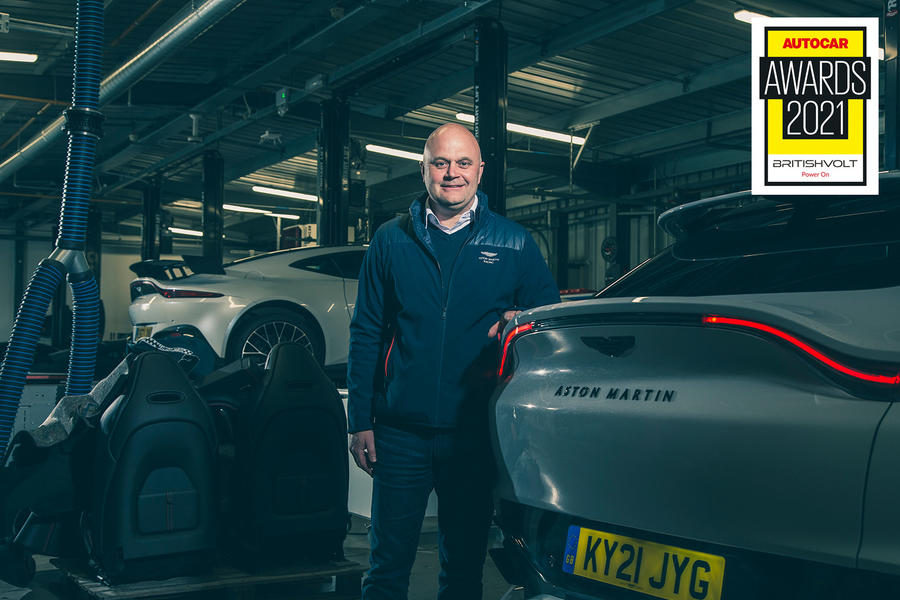 Stellantis’s Klaus Busse wins Autocar’s Design Hero award for his contributions to Fiat, Alfa Romeo and Maserati, including on the new Fiat 500 electric and Maserati MC20 supercar. He has helped the brands regain their Italian flair and desirability.

This year’s Lifetime Achievement Award has been won by Richard Parry-Jones, an industry titan who helped transform the fortunes of Ford through his role leading the development of cars such as the Mondeo and Focus.

Sadly, Parry-Jones died earlier this year, shortly after being informed that he would be awarded the trophy. 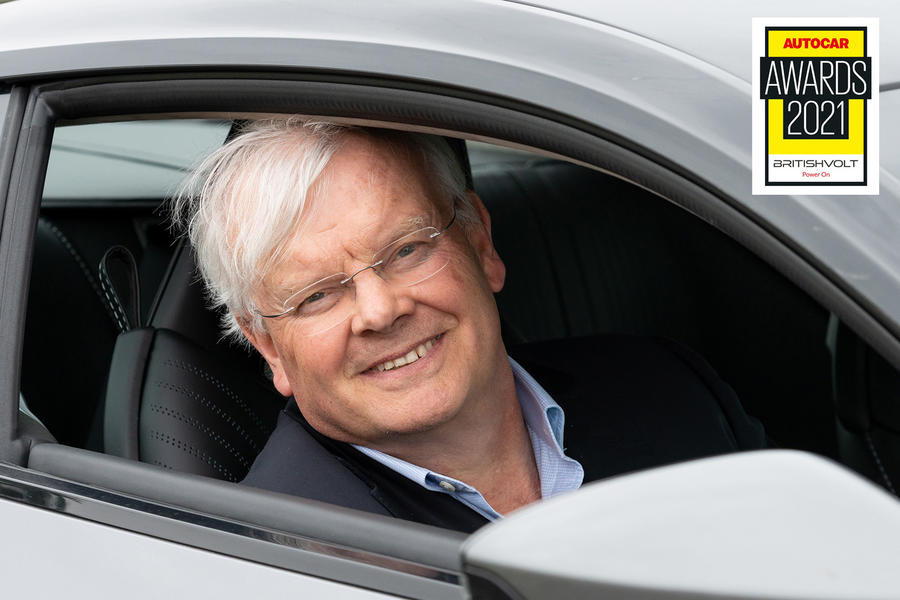 Innovation comes in many forms, and it’s not always about pioneering technology or groundbreaking hardware. Sometimes, such as in the midst of a global pandemic, the real innovation is found in identifying new ways of working, in decision making and in revamped processes, rather than production. Bentley's crisis management team's fast-acting reaction to Covid-19 set a gold standard for crisis response that has served the company beyond all expectation, earning the brand this year's Autocar Innovation Award. 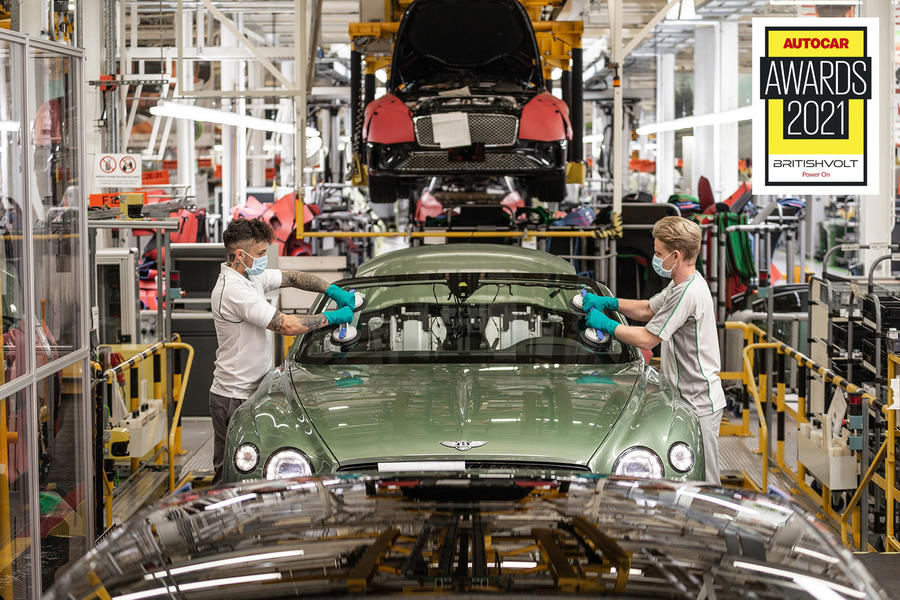 Cynics may have been quick to scoff when the Spanish businessman founded the electric single-seater series in 2014, but it has grown into a full-blown FIA world championship featuring seven of the world’s major car makers. New series Extreme E doesn't exactly aim to repeat the formula, though: it has embraced gender equality, and shines a light on what motorsport can do to help when it comes to improving our climate for the better. 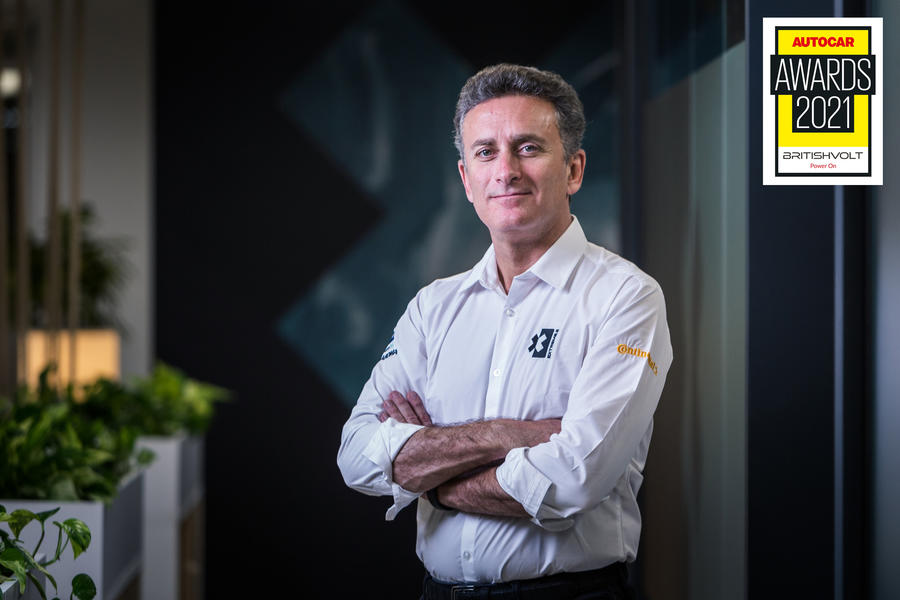 It’s rare that a car retains its Britain’s Best Driver’s Car title once, but the Ariel Atom 4 won’t arrive at this year’s BBDC contest as an outsider looking for a third win on the bounce. Last year’s contest, held in wet, cold conditions, shouldn’t have suited the Atom or any sodden, shivering person inside it, but it was just the purest driving experience we had on offer. It has agility and pace to spare, and it combines that raw ability with a lovely linearity and a way of telegraphing its every move that sucks the driver into the process and keeps them aware of exactly what’s going on.

Those are the two keys to a truly great driver’s car: fantastic objective ability and a willingness to tell the driver what is happening. The Atom 4 achieves both of those. 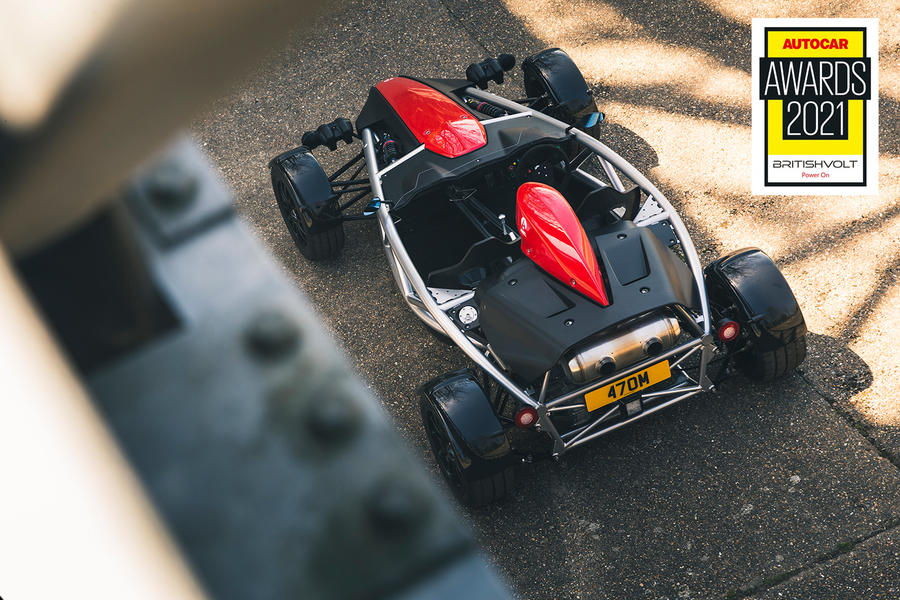 Contrary to the explosive hype uncorked by its arrival, the Toyota GR Yaris was no shoo-in for a five-star verdict. Nothing ever is. Notable foibles include ergonomics that are hampered by the perched driving position, and the rear-view mirror cuts off your line of sight on the way into corners: not great in a B-road specialist.

And yet, both in concept and execution, the GR Yaris is a spellbinding machine, shot through with integrity and feel-good factor in equal measure. That’s rare in six-figure thoroughbreds, let alone £30,000 tearaways.

It’s a complex car on paper but feels gloriously pure on the move, and it has not only performance to spare but also serious intrigue in the handling department: trustworthy, but with an edge to its dynamic character. You simply don’t get bored with the GR Yaris. Ever. Which is why, at last year’s Britain’s Best Affordable Driver’s Car contest, it put to the sword not only the Volkswagen Golf GTI (we knew it would), but also the Ford Fiesta ST (slightly surprising, that) and the Honda Civic Type R (simply, wow). Bravo Toyota, you’ve created a legend. 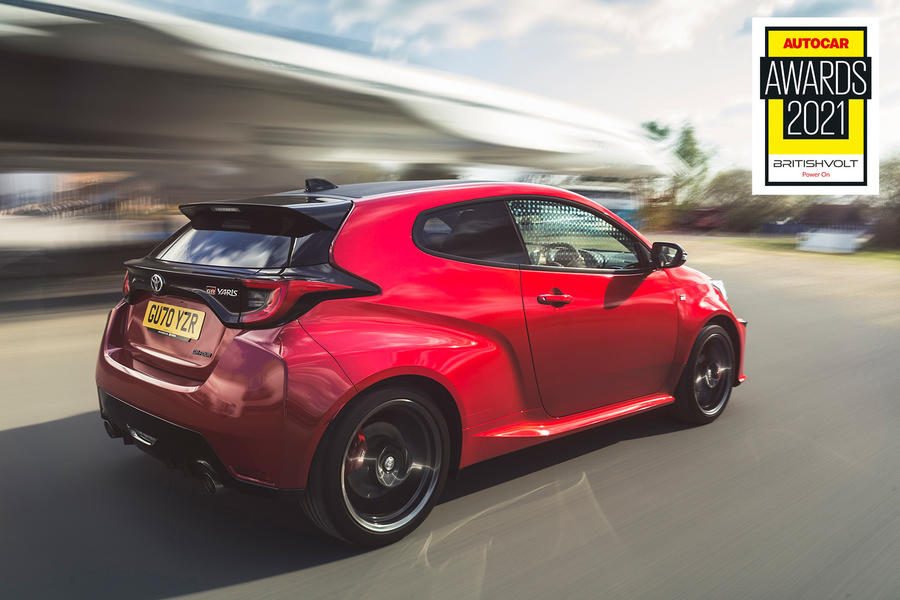 Autocar invented the road test 83 years ago this year, and it remains the most thorough and exacting test in the industry. A five-star Autocar road test verdict is rare, with just three cars earning that distinction over the past twelve months.

Any five-star car should, among its numerous other strengths and attributes, somehow ‘move the game on’. Equally, cars that are objectively superb but don’t break the mould generally don’t make the grade, falling half a star short. So where does that leave the Alpina B3 Touring, which as a mid-size performance estate is about as revolutionary as a toddler refusing to eat peas? Well, there’s another hugely significant metric of success that we Autocar road testers constantly refer to, which is ‘fitness for purpose’.

It’s here that the B3 Touring crushes the brief in a fashion that isn’t merely rare but perhaps unprecedented. If we were to plot a spider chart showing the attributes of ride quality, handling finesse, performance potential, build quality, interior opulence and all-round usability against the ideal for this kind of car, it would be lapping at every edge.

It’s a beautifully conceived car, almost perfectly executed, and marries many strengths that taken individually would surely encroach on the abilities of specialist machines. The finest all-rounder on the planet today? We think so. 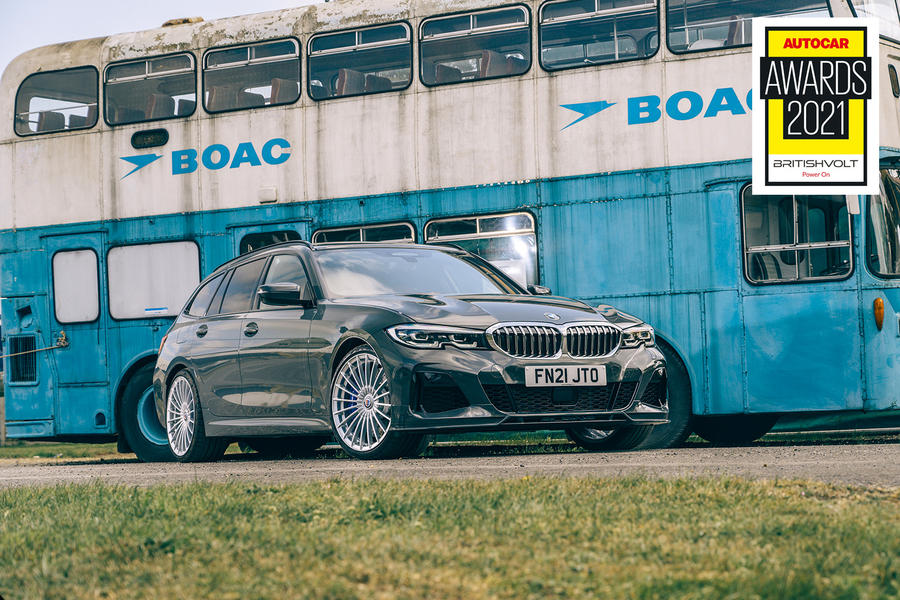 The Autocar road test has given some emphatic recognition and praise to plenty of electric cars over the past decade. But no battery-electric production machine – not the Tesla Model S in 2013, the BMW i3 in 2014, the Jaguar I-Pace in 2018 or the Kia e-Niro in 2019 – was awarded a full-house five-star rating before the brilliant Porsche Taycan. More than any other car of its ilk, the Taycan vividly demonstrates that the electric car can be so much more than the dull, characterless means of transport that so many expect.

An astonishingly fast, really tactile, effortlessly poised and genuinely absorbing driver’s car as objectively accomplished as any bigger Porsche that has ever been built, it goes leagues beyond the staggering catapult acceleration and rapier response of its one-trick high-end electric rivals. It handles, communicates and involves superbly well on the road and holds its own on track, too. It’s a proper Porsche, much as some won’t easily admit it.

What’s more, if Porsche’s stunning accomplishment with this car had been achieved by simply squeezing the most state- of-the-art electric powertrain, energy storage and active chassis technologies into a car with a six-figure price, the Taycan would have a credible sporting rival by now. But, not counting the intimately related Audi E-tron GT, it doesn’t – and we suspect it won’t for some time to come. 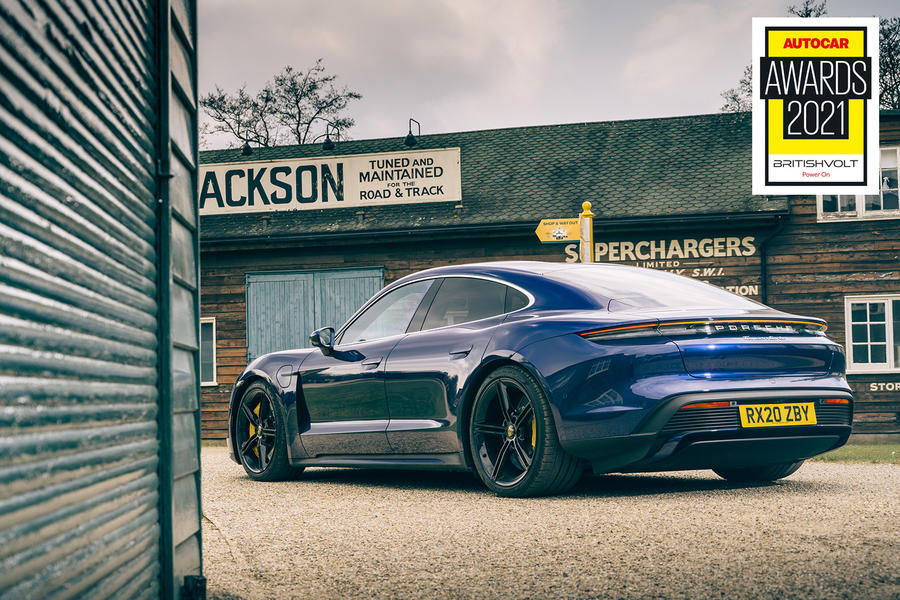 The Autocar Awards ceremony also recognised the used vehicle market, which is rich with gems that enthusiasts still lust after today. The entire Autocar editorial team was asked to name and justify the used car they had been dreaming about for the past twelve months, and then vote on everyone's nominations to find an overall winner.

The E39 BMW M5 earned the title of Used Car Hero, having been a true super saloon of its day, and still having a commanding presence on the roads now, yet still being within the realms of affordability. 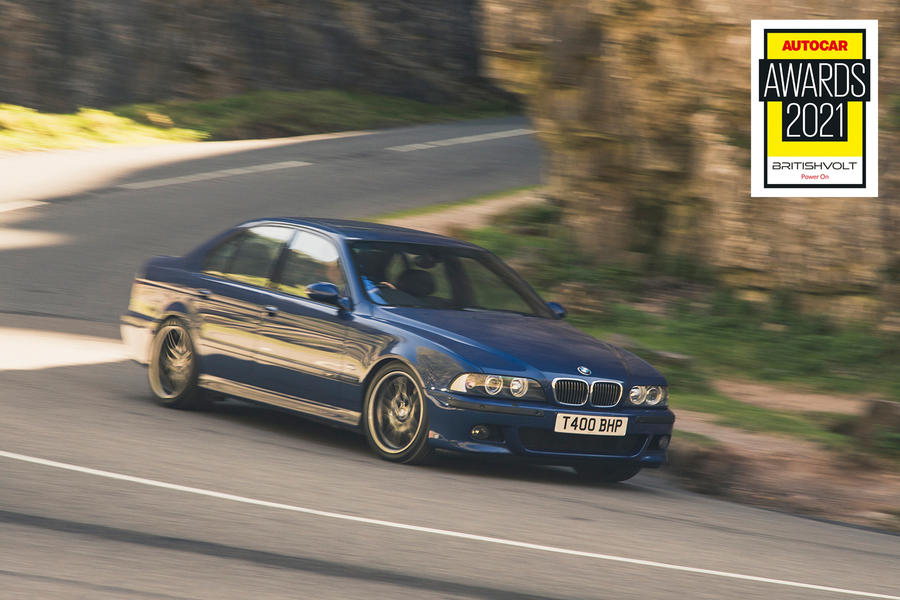 This year's Reader's Champion award assembled the ultimate three-car garage. Decided by thousands of Autocar readers in an online poll to determine which three models would make the perfect £100,000 garage, comprised of a daily driver up to £30,000, a 'just for fun' choice for up to around £50,000 and a new or used 'wildcard' for a maximum of around £20,000. The Volkswagen Golf GTI, Alpine A110 and Land Rover Defender took top honours. 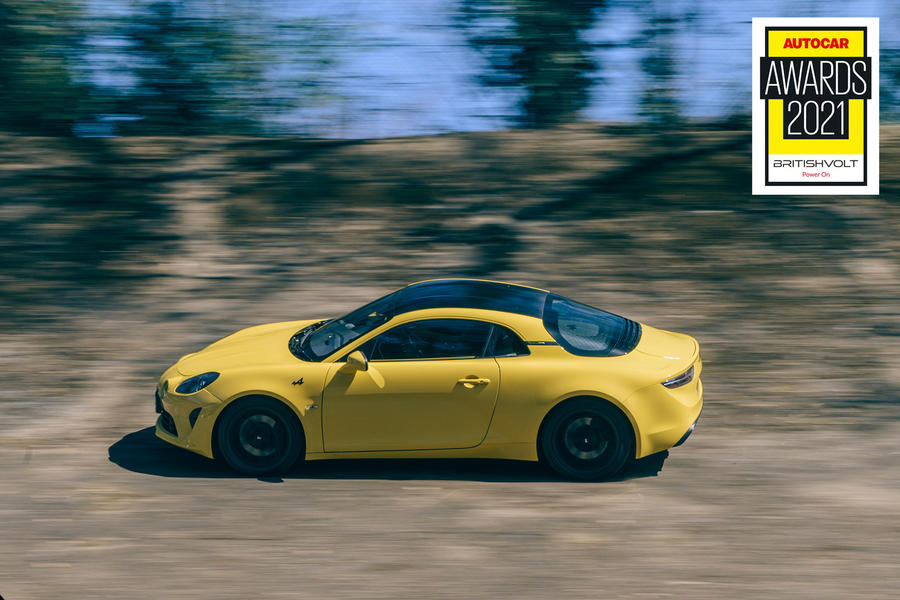 Autocar also handed out Outstanding UK Leaders awards to Eddie Hawthorne, CEO of key UK car retailer Arnold Clark, for steering his business through a calamitous past 14 months, and Alison Jones, who has helped Stellantis UK withstand Brexit, the shift to electrification and a pandemic. 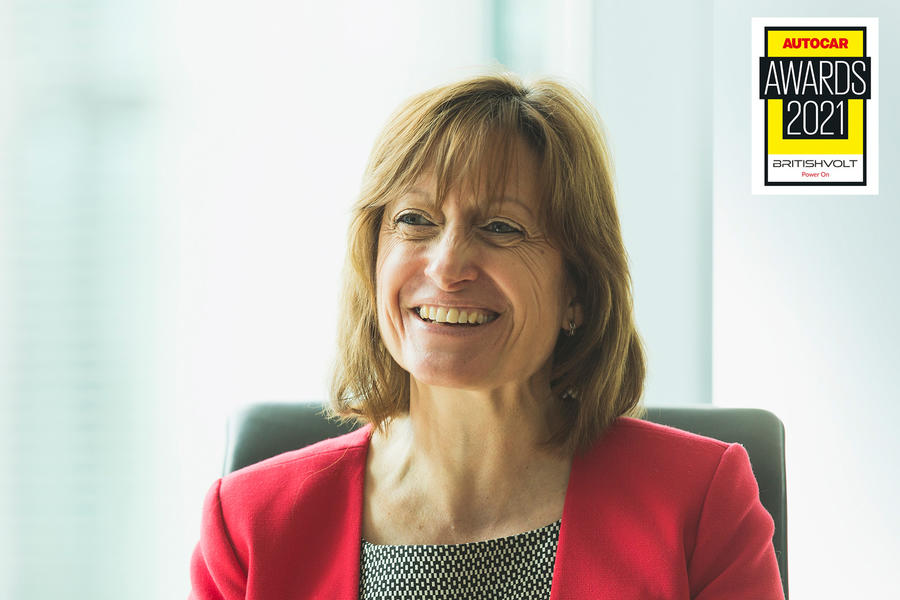 I'd love a Yaris GR.

And because of so many people now being conned into finance packages (which is why car makers can get away with raising list prices to such ludicrously high levels) that means they'll spend thousands on something that they'll never own, so there should be a few bargain used ones around in a few years time - assuming they haven't all been crashed :D