The Berkshire restoration specialist fettles ageing Ferraris with an almost religious fervour. We pay it a visit
Open gallery
Close

Think you know, broadly speaking, what’s involved in running a Ferrari restoration business? Huge skill is the prime commodity, no doubt, but surely it’s simple enough after that: you take worn and rusty old cars that might well have been standing unloved in a barn for decades, spend months lovingly renewing and repainting them and then charge high prices for your concours-level work. Not such a difficult concept, is it?

If this is your opinion (and it was mine until a few weeks ago), I advise an urgent trip to GTO Engineering in Berkshire, where the art of Ferrari rebuilding and restoration sets some of the highest standards in the world. It’s a 25-year-old business founded by Ferrari enthusiast Mark Lyon, currently based in a building that looks more like a stately home than any automotive headquarters I’ve ever seen, just outside Twyford on the London side of Reading. When Lyon starts explaining what the business is really like, the extent of your ignorance will be revealed.

First, there are very few old Ferraris left in barns, waiting to be restored. And that goes double for the Colombo-engined V12 models that are Lyon’s specialities. Second, people who own such cars are reluctant to use them very much, so high is their value and so pressing is the need to keep their mileage down. Third, if you do happen to turn up a dream barn find (you almost certainly won’t), your rebuilder probably won’t be able to source the engine, gearbox, body or suspension parts you need, or even find the right oil tank or radiator. It’s probable they won’t have the required old-Ferrari expertise (it takes six or eight years to give a tradesperson the confidence and knowledge to tackle an old Ferrari). In short, the old business has turned on its head. 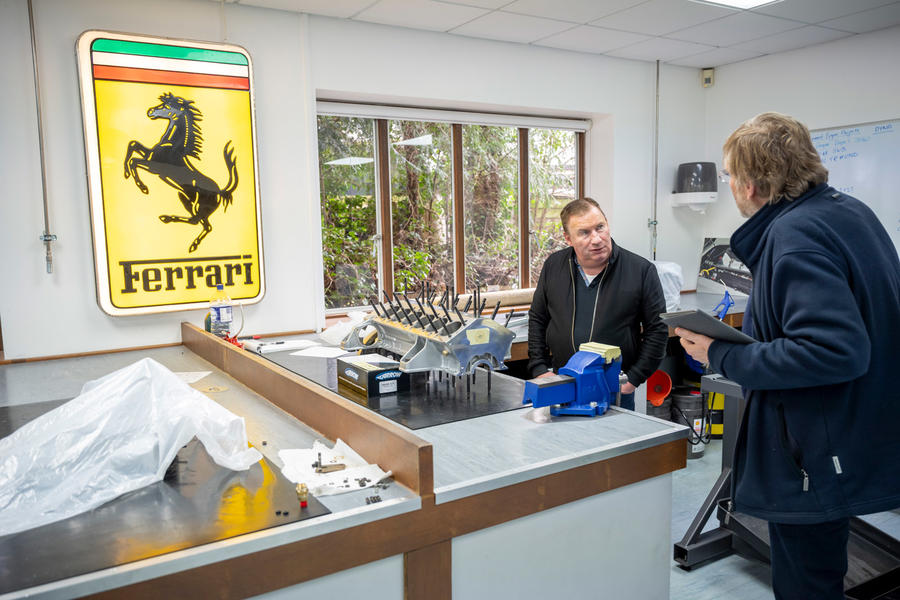 All of these are things that Lyon has learned since he left technical college 40 years ago and began work as a car technician. He started out in the workshop of a prestige dealer in London and soon ended up running the place. Then he joined a Ferrari dealership and was soon the workshop foreman. That was where he witnessed the gradual end of the Ferraris-in-barns era. “I saw my first £100,000 Ferrari restoration job,” he says. “Back then, people were still using their cars…”

Driven by a desire to run his own show, Lyon started doing engines and gearboxes in a garage in the north-west London suburb of Northwood, because there was no room for anything bigger. Soon he moved to a slightly larger place that his brother owned, coining the name GTO Engineering.

“I liked the engineering as much as the cars,” he explains. “And it was fun meeting the characters who owned them.” After a few successful years, a friend with a parallel business, Tony Merrick, suggested that Lyon take him over – customers, buildings and staff (15 to 20 of them) at a place near Reading called Scarlett’s Farm. It was a big leap, but it worked, and GTO forged ahead for a dozen years until it became obvious that it needed more space again.

That’s when it moved to its current place, formerly the headquarters of a civil engineering firm. It’s a big site, complete with a lush surrounding lawn, gardens and even tennis courts, but when Lyon takes you on a tour – through assembly shops, service centres, machine shops, restoration bays and a new CAD department, it’s perfectly clear that there’s now no spare space here either. Perhaps one day those tennis courts will have to go…

Far from a simple, unchanging concept, the old Ferrari business needs reinvention every few years, says Lyon; and because he has learned that, he has no fear of it. When he started, the business was fairly evenly split between service, restoration, parts supply and racing, but as time has passed, things have changed. 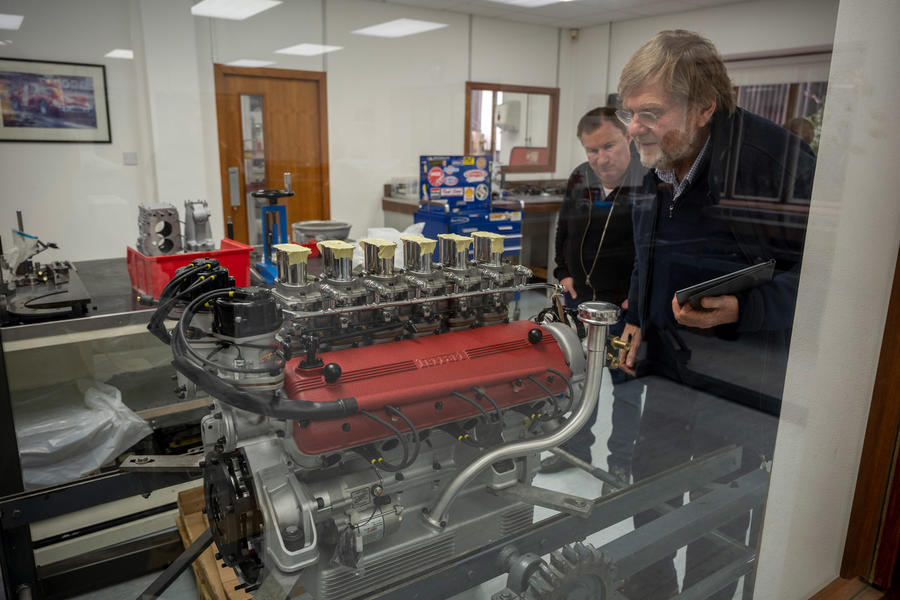 “I don’t much like racing,” says Lyon. “You’re often dealing with egos bigger than the talent available. If they win, they tend to forget how it happened, which can be frustrating. So these days, our race projects tend to be for friends we know.”

The servicing business used to concentrate on older cars that official Ferrari dealers had lost interest in, but nowadays Lyon is finding that owners of more recent models also appreciate the GTO touch. Restoration is a smaller business than it once was, both because most great cars have now been ‘done’ and because owners don’t wear them out.

However, parts is a global business these days, explains Lyon. The Ferrari factory isn’t interested in making components for Colombo V12s any more, so GTO makes them instead. It can build you an entirely new engine, using new casting and ancillary components made in the UK and just like new.

The firm doesn’t change anything (“copy an original and it will work”), although owners of original 3.0-litre 250 models are often happy to install ostensibly identical (but sometimes 4.0-litre) GTO Engineering engines, leaving their original units safely unused on a stand.

“We’ve become known for supplying all the difficult bits people need,” says Lyon. “We have a base in Los Angeles these days, which helps, and there’s similar demand in the Middle East and Asia. We buy parts stock from anywhere in the world, and we make components or have them made. We do complete gearboxes as well as engines. In fact, everything except the carburettors, which are still original Webers.”

However, one unexpected coup has been the unprecedented demand that Lyon has generated for two re-engineered ‘Revival’ models built by GTO using donor vehicles: the 250 GT SWB and the 250 Testa Rossa. The donor cars provide chassis, engine, gearbox and as much running gear as possible (GTO’s people will help you source, say, a 330 GT for the job). Then after a few months of workshop time, out pops a car that’s more or less unmistakable from the original 250 – except that it’s considerably better built. (GTO Revival editions carry secret serial numbers so that they can never be passed off as original.) 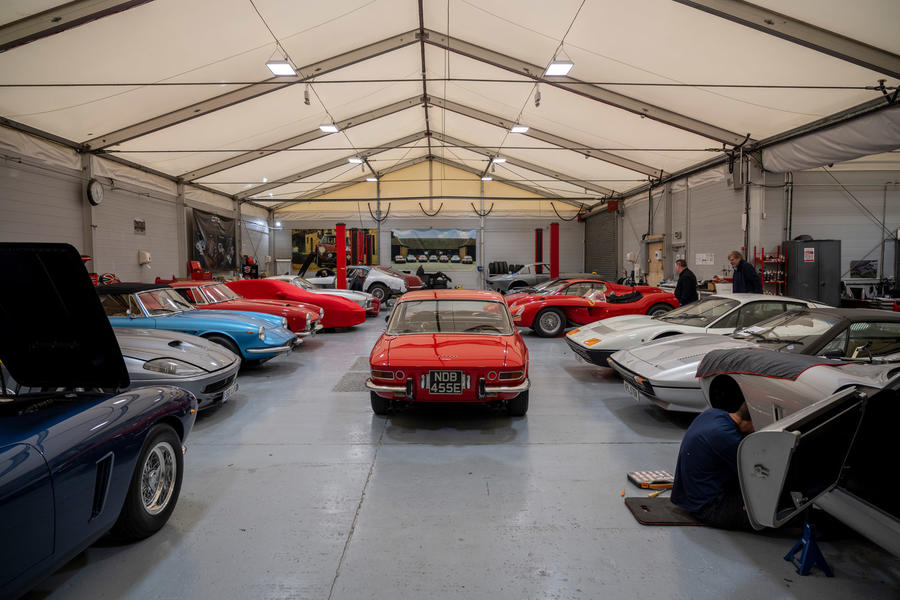 A GTO Revival car represents spectacular value: find a donor Ferrari, then fork out over £750,000 or so and you will soon have a machine that looks as good as, and can be used more easily than, a 1960s Ferrari classic that’s now worth many tens of millions. Last year, GTO built about 20 of them – mostly 250 SWBs.

In the past, Ferrari officialdom has been famously snooty in its dealings with nonfranchised specialists, and even today the sides are careful about how they deal with one another. But you can definitely sense a softening of attitude on the Italian side, if only because GTO is such a handy source of beautifully remanufactured, extremely rare parts and forged front suspension pieces, for example. Ferrari Classiche buys from GTO, albeit always through a third party.

But what of the future? Even the supply of donor V12 Ferraris must run out some time soon, not least because these cars are acquiring their own rarity value. Lyon is already 18 months into a second new plan, even bolder than the first. He wants GTO to build its own classic Ferrari-esque car, called the Squalo (see right), charge £1.5 million per copy and have it on the market in 2023.

As we walk back through GTO’s engine-building workshop, Lyon casually lifts the cover over a Testa Rossa engine, showing how amazingly compact it is, even in modern terms. It also weighs only 180kg, he says, which again compares pretty well with many of the latest units.

One thing that strikes me about this extraordinary place, so completely stuffed with past achievement and future potential, is how modestly its founder displays its many facets. I’m moved to remark on the fact: “You don’t boast much, Mark, do you?” He glances at me as if I’ve lost my marbles and replies: “What would be the point of that?

“The Squalo idea came to me at a car show in Riyadh in October 2019,” says GTO Engineering boss Mark Lyon. “We were looking at a Singer Porsche and it suddenly occurred to me that we should do something similar. So during the first lockdown, we got serious.”

The Squalo isn’t a Ferrari, but it is heavily influenced by Lyon’s beloved Colombo V12 cars. An anonymous London-based designer has produced what looks like an updated 250 SWB with more modern proportions and far better ingress/egress than an original but using many of the Colombo-era components, including engines and gearboxes, that GTO makes already.

It’s a compact two-seat coupé that’s based on a classically massive old-Ferrari twin-tube chassis and has a 400bhp 4.0-litre V12 in its nose to drive its rear wheels, but it will have sensible cabin and boot space.

Lyon hopes to have a full-sized clay model at HQ by the end of this year and put series cars on sale in 2023.

Lyon isn’t aiming to build huge numbers (one car per month adding £18 million to GTO’s annual turnover would be a nice adjunct), but he believes the Squalo will appeal to a new clientele: a slightly younger lot who want to drive great cars, not just own them. They will be attracted to a car that sounds amazing and is pretty quick but responds in a classic way, not like today’s “almost insanely fast” hypercars. It’s a compelling recipe.

"Huge skill" is the quintessential antithesis of a commodity.

Yes, this was a fine article, it showed how one man built a multi million pound business, and, to open an old wound, how, who were involved in Britain's car industry demise?, because, if one guy can do this, why, why aren't there more today?

Nice article - and well done to Mark Lyon for building the business.