BACK TO ALL NEWS
Currently reading: From print to pixels: Digitising the Autocar Archive
UP NEXT
Hope for Bloodhound LSR project as sponsor talks start again

From print to pixels: Digitising the Autocar Archive

Autocar’s entire collection of back issues has been painstakingly digitised into a searchable library that documents the whole history of the motor car. Here's how it was done
Open gallery
Close

The moment it moved on from a ‘wouldn’t it be great if...’ conversation to something more concrete, I might have let out a small yelp of joy. Taking a trip to the Autocar archive, usually tucked discreetly down some stairs in whichever office Haymarket Media Group has occupied at the time, has been one of the pleasures of working here.

A pleasure denied for too long to too many people. Some libraries and museums have back issues of Autocar, but standing among a full run of issues, which report almost the entire history of the car and which are neatly bound and searchable via handwritten or typed index cards, is a great way to lose an afternoon and miss a deadline. Or two.

Then came the email from Jim Holder, former Autocar editor and now editorial director: ‘Next time you’re down there, can you count how many bound volumes there are and how many pages you think might be in each one?’ 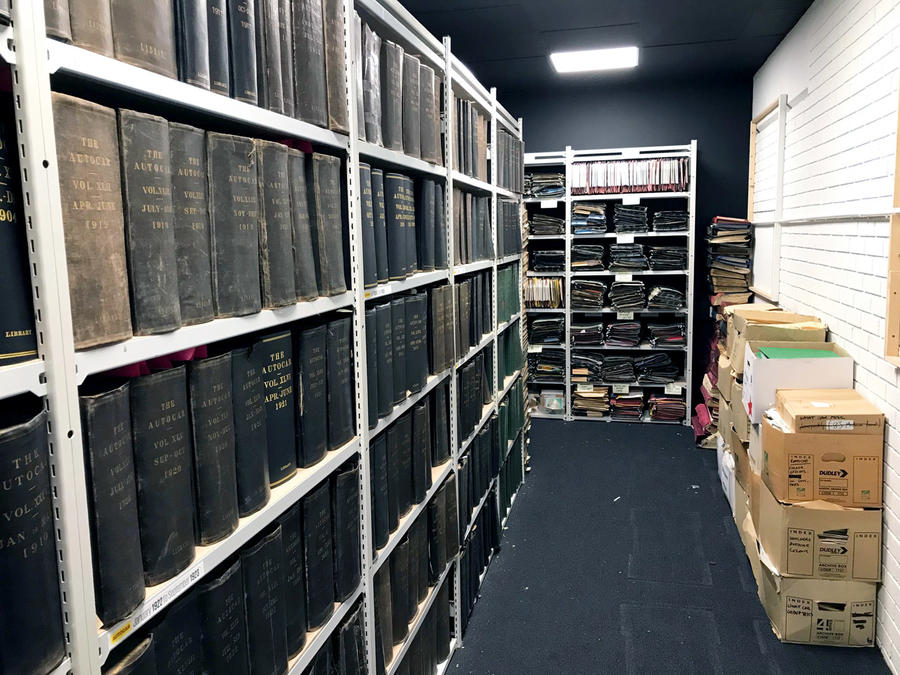 It had begun, then, and now it has finished. The back issues of Autocar, formerly Autocar & Motor, originally 1895’s The Autocar, and incorporating a couple of other titles along the way, has been digitised. It’s searchable. You too can have the joy we routinely did. It is brilliant.

The answer, by the way, was 460 bound volumes, containing more than 6000 individual issues across Autocar’s 126 years. Early back-of-envelope estimates reckoned that would mean somewhere in the region of 750,000 pages. It has worked out at rather more than that.

Step forward Pete Boswell of Archive Digital Ltd, a bloke with a varied career but one which has culminated in him becoming the go-to guy for digitising old texts. Among the work he and his team in Stratford-upon-Avon have completed range from rock music contract archives through Shrewsbury School library’s medieval manuscripts to West Bromwich Albion FC’s old match day programmes and ledgers.

The Motoring Archive, though, is Boswell’s team’s biggest project yet. With Autocar, there have been approximately 1.1 million pages – adding at least 100 new ones every week – to scan and digitise. 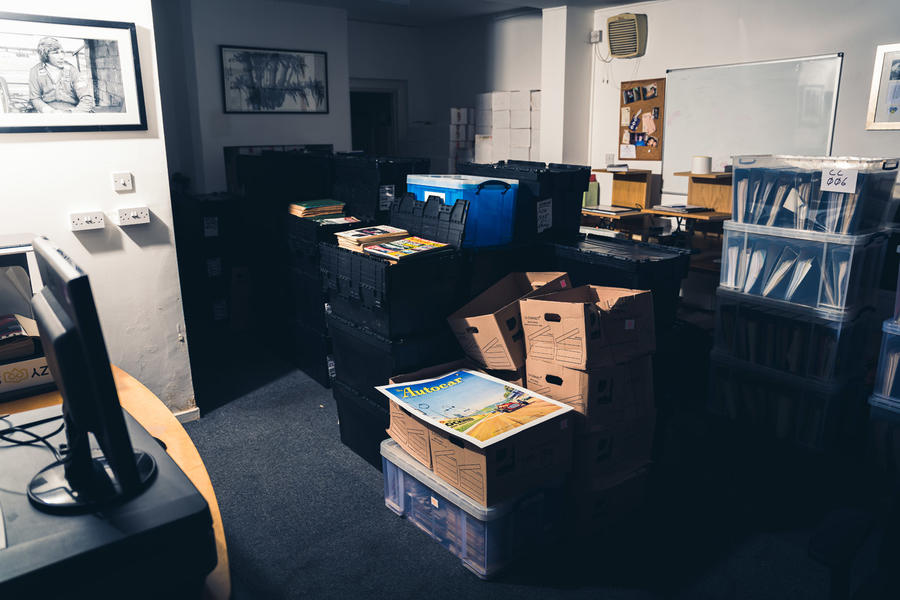 The standard way to digitise pages is using a flatbed scanner, such as those made by Zeutschel. They’re “the most reliable in the world”, says Boswell, “but they’re slow”. Flatbed scanners also don’t treat big bound antique volumes kindly. You have to pick up the entire volume, turn it over, flip a page and lay it back down – and the result is rather better if the spine is broken so the page flattens on the surface.

Autocar has duplicate copies of some old back issues, so treating them badly doesn’t matter so much, but there is a quicker and kinder method, which for these purposes works perfectly well. It just looks a little more basic: it’s a plank of wood with a hole in it, through which one aims the camera of an iPad. Place a volume beneath it, press the button. “Picture quality is on a par with a mid-range SLR camera,” says Boswell. That’s plenty for a magazine captured at close range.

And it’s so much quicker. Boswell’s team consists of four full-time scanners, who have taken from April time until, well, not long before now, to get through the collection. Computers do the rest. Optical character recognition software deciphers the text with “100% accuracy”, which makes the entire collection of issues searchable by keywords, and the picture is cropped and converted to a PDF automatically. Then there’s a quality-control check and, from this point, it’s all cataloguing and labelling issues by date. An exception is front covers, which will be flat-scanned so they can be upscaled to A0 size in print; we will be offering fine art prints of some. 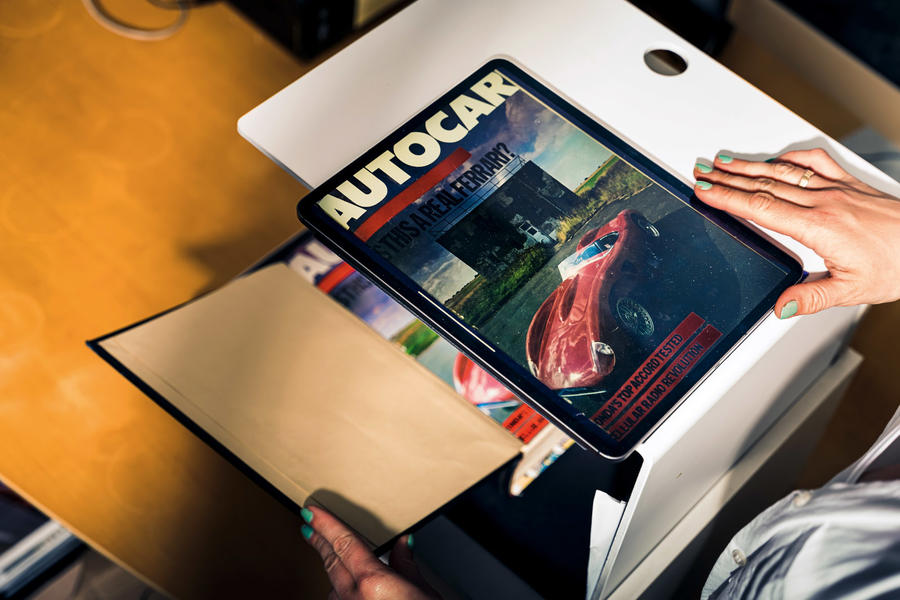 Then there’s testing. Staff here have been through it, as have 50 readers who expressed an interest in Beta-testing the archive. More than 4000 of you volunteered to do it.

I’m told that Autocar has published every week since 1895 bar a few issues when industrial action and paper shortages disrupted production. When I spoke with Boswell, he wasn’t aware there had been any missing issues, but the final stages of cataloguing and testing will tell us for sure if anything is missing.

The outcome is unique. “It’s the world’s first motoring magazine archive,” says Boswell, who thinks it’s synergistic with other motoring magazines, too. The What Car? back catalogue will be archived soon, as may other magazines that I’m contractually obliged to pretend don’t exist.

Anyway, from reporting the abolition of the ‘red flag act’ in 1896, through the invention of the road test in 1928 and right up to today’s news and reviews, there’s no other collection quite like Autocar’s.

1903 We previewed the Motor Car Act, which introduced licences and registration. Plus analysis of the first Vauxhall car and coverage of French and American reliability trials.

1922 An advert for the Vulcan 12hp featured on the cover. The 16th International Motor Exhibition in London dominated the issue, with 556 exhibits. Marconi demonstrated wireless for cars.

1958 This year’s motor show introduced the Aston Martin DB4, Austin A40, Rover P5 and more. We road-tested the Humber Super Snipe and examined the past four years of Formula 1 development.

1975 The new Lancia Beta Monte Carlo impressed our road-testers. “Big brother loomed” as speed cameras were trialled in the UK. The motor show was well attended but “positively disappointing” from an engineering perspective.

1994 We scooped Ford’s £3 billion new Escort project (which turned out to be the Mk1 Focus). The BMW M5 beat the Audi S6 and Jaguar XJR. Our road testers examined the BMW 318ti Compact.

To celebrate the launch the Motoring Archive, you can enjoy your first 14 days of access for free, switching to just £7.99 a month thereafter.​ Head to themotoringarchive.com/join and enter AUTOCAR007 at checkout to start your free trial.

2 months on and this is still absolutely hopeless. I cancelled my subscription last night. Autocar are so critical of manufacturers who's cars have a slightly firm ride or scratchy plastic on a door trim but will sign off beta junk like this!

Working within the digitisation sector, the method of capturing used is rather rudimentary. Would be far better to use a professional V-Shaped scanning solution that captures right into the spine whilst minimising damage to the page/spine. The results are high quality images and using equipment designed for the task.

Maybe the budget just isn’t there to do such a complete job. Shame, would have jumped at the chance to do this!

The project involved a number of key milestones that required the archive to be fully digitised and OCRd within 7 months. As you are in the digitisation sector, you will be the first to agree that traditional methods of capture were not suitable to meet this shorter timeline.

The project was undertaken using a new technology based approached that used the same quality CCD to capture the pages and App's to manage the cropping, gutter curviture and OCRing of the pages.

The original media that was used as the source material for the project comprised of different degrees of quality ranging from very poor to very good. Overall, the team who have created this resource have done a very good job.

If you would like to contact me directly I would be more than happy to discuss the project with you.

It's a lovely idea. Which is why I paid for access.

Sadly, current implementation isn't fit for public consumption. Numerous problems from the procedural (scanning method fundamentally broken with most pages having parts cut off, issues in wrong order or repeated) to the structural (search facility appears not to work) and the simply incomplete (many even quite recent years are missing some or most of their issues).

Surprised it was allowed to go live in this state. It's totally half baked and doesn't do much for Autocar's brand to be taking money from people for such a poor quality product.

There have been a number of technical issues that are being resolved, most notably with the search functionality across the entire archive and with a some latency in rendering the issues. Some of the magazine issues are undergoing additional QC before they too will be made available and visible on the portal.

If you can direct me to the areas where you can see 'broken-pages' this will be recifitified immediately. (Our email details are included below)

The most recent years ('born digital') content has not been digitised and is to be provided by Autocar and will be ingested to the portal in due course.

We appologise if we have not got it perfect first time, but be assured that we are doing everything possible to iron out all of the techical creases as quickly as possible.