BACK TO ALL NEWS
Currently reading: From the archive: Goading the Mercedes-Benz Grosser
UP NEXT
Alfa Romeo to show new sports car in early 2023

From the archive: Goading the Mercedes-Benz Grosser

Racer-writer Innes Ireland told in 1968 of a weekend testing the "less obvious qualities" of a 21ft-long limo...
Open gallery
Close

Innes Ireland was a man of extraordinary character, according to all those who encountered him, as well as a very talented driver – he won the 1961 US Grand Prix for Lotus – and, after retiring from racing, a respected Autocar writer.

It was in these pages, on 9 May 1968, that he detailed some time he had spent with a friend's newly purchased Mercedes-Benz 600 Pullman.

The 600, produced from 1963 to 1981, is better known as the Grosser – a corruption of Große, the German for 'grand'. It was a rival to the likes of the Rolls-Royce Phantom; today's equivalent would be the Maybach version of the Mercedes-Benz S-Class.

In the '60s and '70s, the Grosser was arguably the ultimate status symbol; owners ranged from the pop figures John Lennon and Hugh Hefner, through billionaire druglord Pablo Escobar to evil dictators Idi Amin and Kim-jong Il.

Of just 2677 examples of the 600 produced, less than 5% were the six-door Pullman variant – and it was one of these that our man Ireland had access to.

Stretching a staggering 6.24 metres from nose to tail, weighing 3340kg at the kerb (morbidly obese even by today's flabby standards) and riding on pneumatic self-levelling air suspension, it was shoved along by the 247bhp of a 6.3-litre petrol V8.

That doesn't sound a lot today, but you must remember that even the contemporary Mercedes-Benz 250 (a straight-six forbear to the Mercedes-Benz E-Class) produced just 128bhp.

Ireland's first engagement with 'The Long Mother', as he called this particular Grosser, was to drive his friends from Paris back to London.

Leaving at 8.30am, the car "immediately warmed to the task," Ireland beamed, "and within seconds we were cruising effortlessly and safely on our way, between 110 and 120mph. Although there was a strong crosswind of 50mph, the three tons of weight pressing down on the tyres seemed to cancel out the vast expanse of car presented to the wind, and we steered a very straight course. 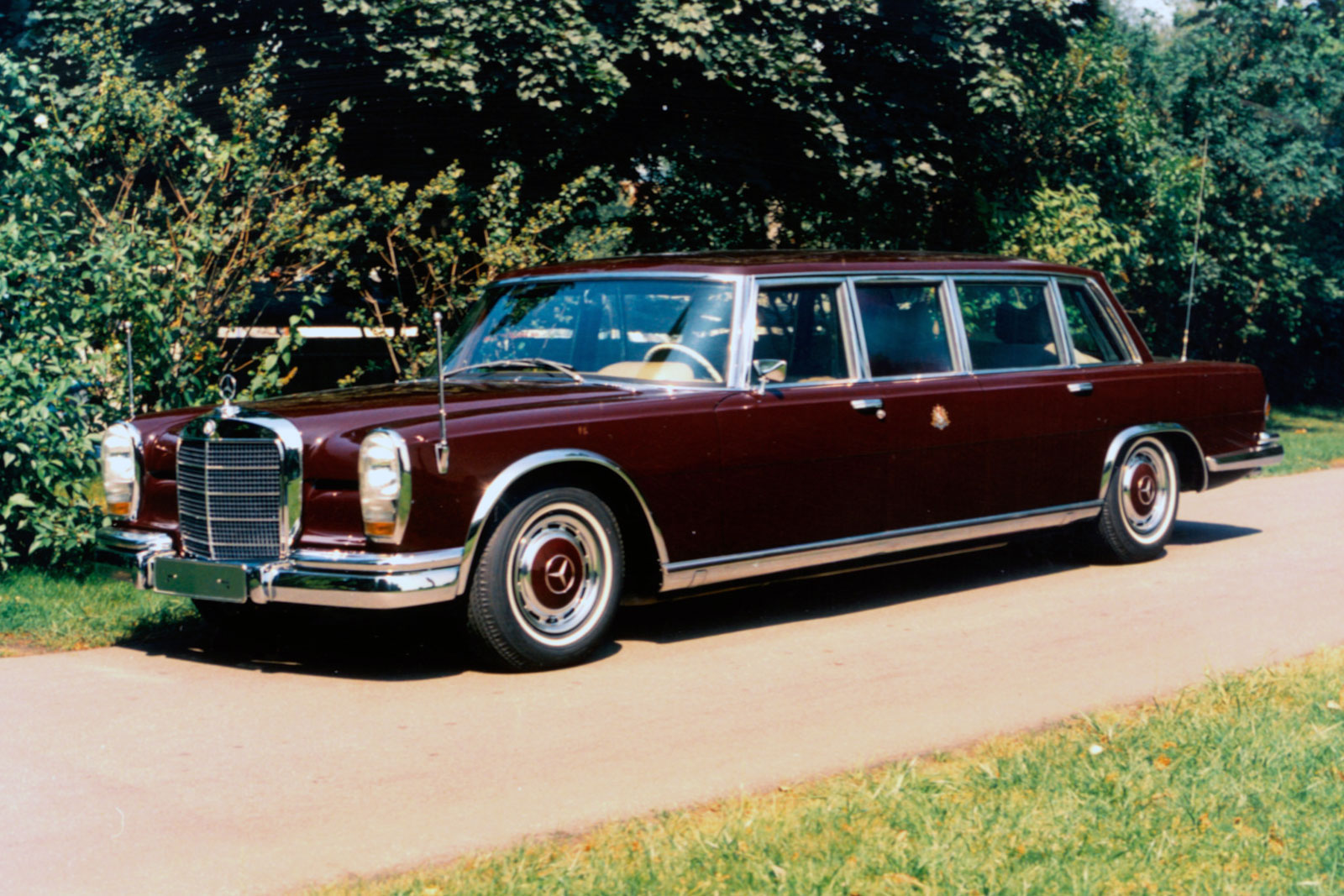 "Calais was reached by midday, and the purser of the Compiègne, with due respect, found a place on board for The Long Mother so that she would be first off – very right and proper.

"Our crossing, which normally takes an hour and a half, took over four and was perhaps one of the roughest of the year. Once docked at Dover, we went down to rejoin the car - and to my complete horror, there she was absolutely sagging at the knees with the tyres almost engulfed by the wheel arches and her belly very close to the ground.

"With a cry of anguish, I searched through the handbook looking for some clue as to the manner in which I could remedy this apalling malady. I started the engine, pushed and pulled knobs, revved up, but all to no avail. By this time, every other car onboard was anxious to be ashore so, stricken cow or not, I prodded her into low gear and we crept up the ramp, very much tail down, with scraping noises from places unmentionable."

Ireland never did work out why the suspension had temporarily given up; "after some more frantic knob pulling and engine revving, she got off the floor slowly but surely, to the cheers of all those present and my eternal relief." Central London was thereafter reached "in a very short space of time". Perhaps the camera gantries on the M25 were out of order that day...

A short time later, our man was entertaining the same friends at his Radnorshire home and courted the Grosser to watch the Gold Cup meeting at Oulton Park circuit in Cheshire (a non-championship F1 race won, incidentally, by Jackie Stewart in a Matra). With no passengers to scare, Ireland "proceeded to find out a little more about her less obvious qualities."

"Thee twisty, hilly 10 miles to Knighton were enough to tell me that the new brake pads [against discs all-round, thankfully] recently fitted by Mercedes were not bedded in.

"The road to Craven Arms was also a twisty and narrow one, and often I had to use the full power of the engine to overtake. The response to the kickdown of the gears [the 'box was a four-speed planetary automatic] was instantaneous and she fairly leapt past slow-moving traffic – all 21 feet of her. But neither her length nor her width were ever an embarrassment, and I soon forgot that I had so much following on behind, although some of those I overtook must have thought they were being passed by a passenger train.

"She could be steered to a hair and I was amazed to find that her vast wheelbase did nothing to detract from the cornering ability. By moving a lever on the control column to put her on hard ride, roll was almost completely eliminated, even when cornering enthusiastically.

"If the trip to the circuit was memorable, it had served merely as an appetiser to the trip home, for I had discovered that The Long Mother could be driven in almost the same fashion as the E-Type Jaguar which I once owned and treasured. In my hurry to get home for dinner, I was perhaps assisted by a tiny speck in the mirror which I recognised as a Ford Mustang.

"When finally I came to a built-up area, I slowed down to the legal limit and seemed to barely crawl along. My shadow behind seized the opportunity to close up on my back bumper, but obviously felt that it would be unfair to go past whilst I was being so law-abiding. But I had my beady eye on him, and as the derestriction sign loomed up, I saw him stiffen as he kicked down on his automatic transmission. I just happened to be doing the same thing at the same time, not in a competitive spirit, you understand, but only to get back up to 70mph as quickly as may be.

"I could almost see the look of bewilderment on the poor fellow's face as The Long Mother gathered up her skirts and drew away quietly but firmly. There he was, hood down, foot down, Les Leston go-faster gloves and all, and this great freight train was pulling away. How I wished for the freedom of the Continent as the open, three-lane road with not a car in sight unfolded ahead of me..." 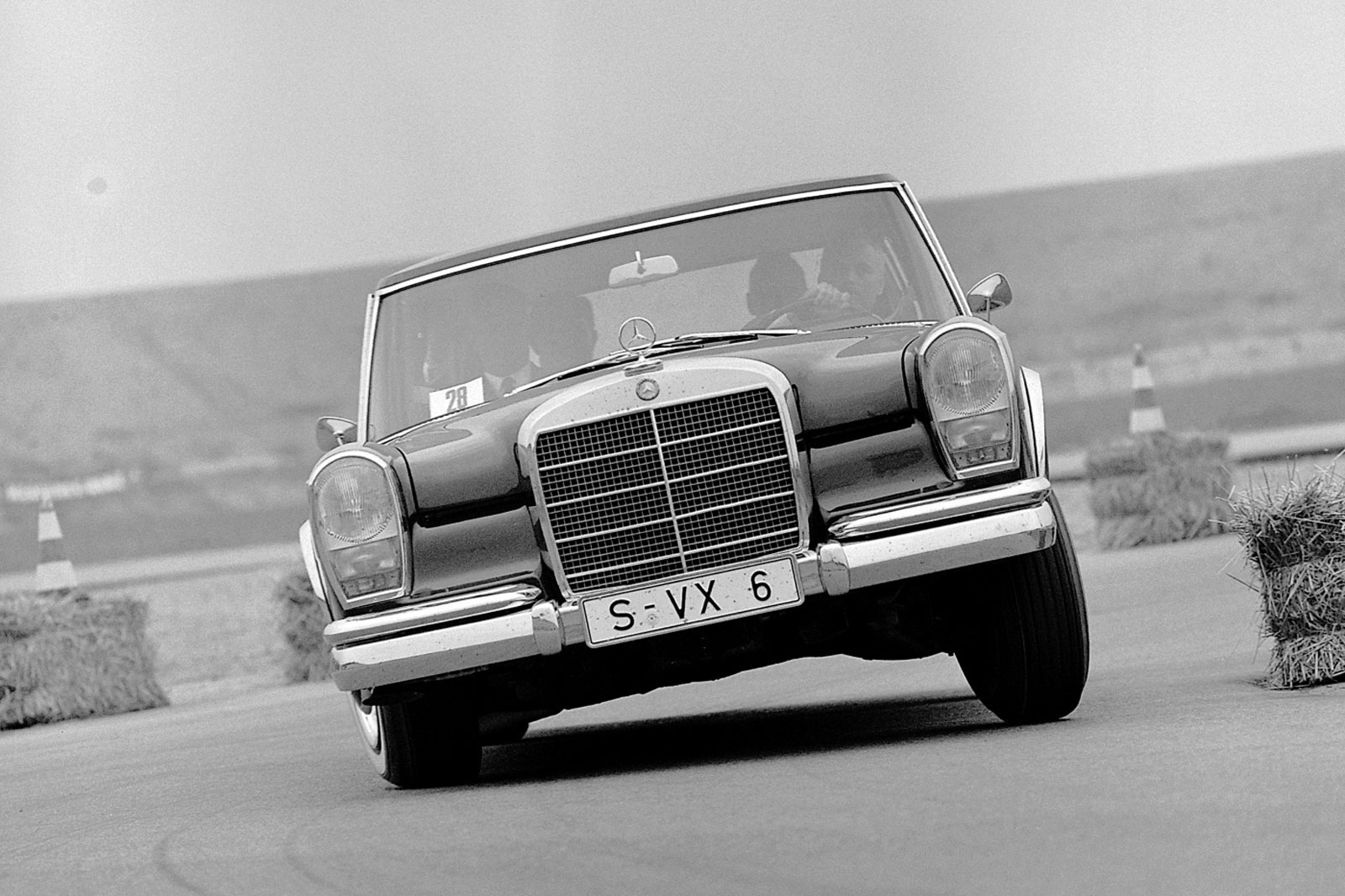 Returning to Oulton Park the next day for qualifying, Ireland was asked if he would take the Grosser around the circuit with the white flag at the end of the race, an offer he accepted with "great glee".

"I wasn't able to really have her head on all the corners," he relayed, "as there were marshals clearing the track of oil and things, but at Lodge, I changed down to second and really leaned on the suspension. As I could see I wasn't going to get round without using a fair amount of grass and scaring my passenger more than he was already, I gave the old girl a flick of the steering wheel and all the throttle. And just like a thoroughbred, the tail went out, a little opposite lock, a suggestion of a wiggle and we were doing 5000rpm and heading up to the pits."

After "great fun and more than 700 memorable miles" that weekend, Ireland returned the car home to the captial.

"In negotiating corners in London's streets, one had to drive almost to the other side of the street before turning the steering wheel," he explained, "lest the rear wheel mounted a kerb. I had often thought that the back end of the car could have all sorts of accidents that I wouldn't even know about up front!"

At Westminster Bridge, a black cab started to turn left alongside the Grosser when it still needed another 10ft, so Ireland blew the horn. "Now I should explain that there are two horns on Her Ladyship," he said, "one quite polite for town use, and the other more akin to the foghorn on the Queen Mary, eminently suitable for the self-righteous on motorways who are led to believe by their inaccurate speedometers that they are doing 70mph when in fact they are doing 63.5mph and refuse to move out of the fast lane.

"Well, as it happened the Queen Mary one was still switched on, and such was the effect producued on the taxi driver that he stopped absolutely dead, depositing his passenger on the floor. I sailed serenly on to my office, casually waving my thanks and nodding politely in the direction of the taxi, but secretly hoping that the passenger wasn't our managing director!

"And so our beautiful relationship came to an end; like all the best love affairs, it had been short and oh so sweet."

That wasn't quite the end of Ireland and the 600, though. It's doubtful that you'll be surprised to hear that a short time later, he rolled and wrote off an example owned by Mercedes-Benz UK during a demonstration at Mallory Park.

This was retold by Motorsport magazine after the great man's death in 1993; apparently, the company's representatives were "less than wholly amused when he climbed, only slightly sheepishly, out of the mangled limousine."

The tale goes that, labrador in tow, he went round to the boot, pulled out his clay pigeon shooting guns and began strolling back to the pits...

Interesting story, especially the part about the suspension failure. In fact it was the not-so-brilliant reputation of Mercedes's air suspension of that time that made me choose a conventionally suspended W108 over the air-suspended W109

I didnt regret my choice as the ride on the W108 was very compliant, uniquely Mercedes (ride quality has character too)

Another incident concerning Mercedes air suspension was an offer to buy an absent neighbour's E500, he was working abroad and had to sell the car as the underground carpark was to undergo renovation, but seeing the car on its (air) suspension stops and not knowing whether the system was functioning, I hesitated and passed over the opportunity. Later, after the car had been sold, the concierge told me the buyer who came to pick it up with a tow truck simply gave the E500 a new battery, started up the car, the suspension went up and he drove it away.

Interesting story, especially the part about the suspension failure. In fact it was the not-so-brilliant reputation of Mercedes's air suspension of that time that made me choose a conventionally suspended W108 over the air-suspended W109

I didnt regret my choice as the ride on the W108 was very compliant, uniquely Mercedes (ride quality has character too)

Another incident concerning Mercedes air suspension was an offer to buy an absent neighbour's E500, he was working abroad and had to sell the car as the underground carpark was to undergo renovation, but seeing the car on its (air) suspension stops and not knowing whether the system was functioning, I hesitated and passed over the opportunity. Later, after the car had been sold, the concierge told me the buyer who came to pick it up with a tow truck simply gave the E500 a new battery, started up the car, the suspension went up and he drove it away.