At the end of 1969, conglomerate Matra, having just won the Formula 1 world championship, penned a deal with Simca, a subsidiary of Chrysler Europe and one of the biggest passenger car manufacturers in France.

This would allow Matra, already famous for its motorsport achievements, to expand its road car business following the Djet and 530 sports cars. Matra would have access to Simca's dealer network and Chrysler's engineering expertise. In exchange, Simca would take partial control of Matra's racing efforts.

The first car they were to produce would be an affordable, three-seat, mid-engined, rear-wheel-drive sports coupé with a small, naturally aspirated engine and a manual gearbox. That sounds brilliant, even today; imagine if Red Bull Racing, for argument's sake, teamed up with a road car manufacturer not for a squazillion-horsepower ultracar but an affordable, sensibly potent Toyota GT86 rival.

The product that emerged in 1973 was the Matra-Simca Bagheera, a poised, handsome car – apt, given that 'bagheera' is Hindi for black panther – going up against the Alfa Romeo 1.3 GT Junior and the Opel Manta.

"The basic chassis structure is simple enough, with tubular longerons running fore and aft between strong, closed-section members at the front and rear of the passenger compartment. These sill sections and bulkheads are further reinforced by what is, in effect, a roll-over cage.

"Extensions from either end of the 'basic box' carry Simca 1100-based structures, which serve to locate the suspension and the engine/transmission unit." 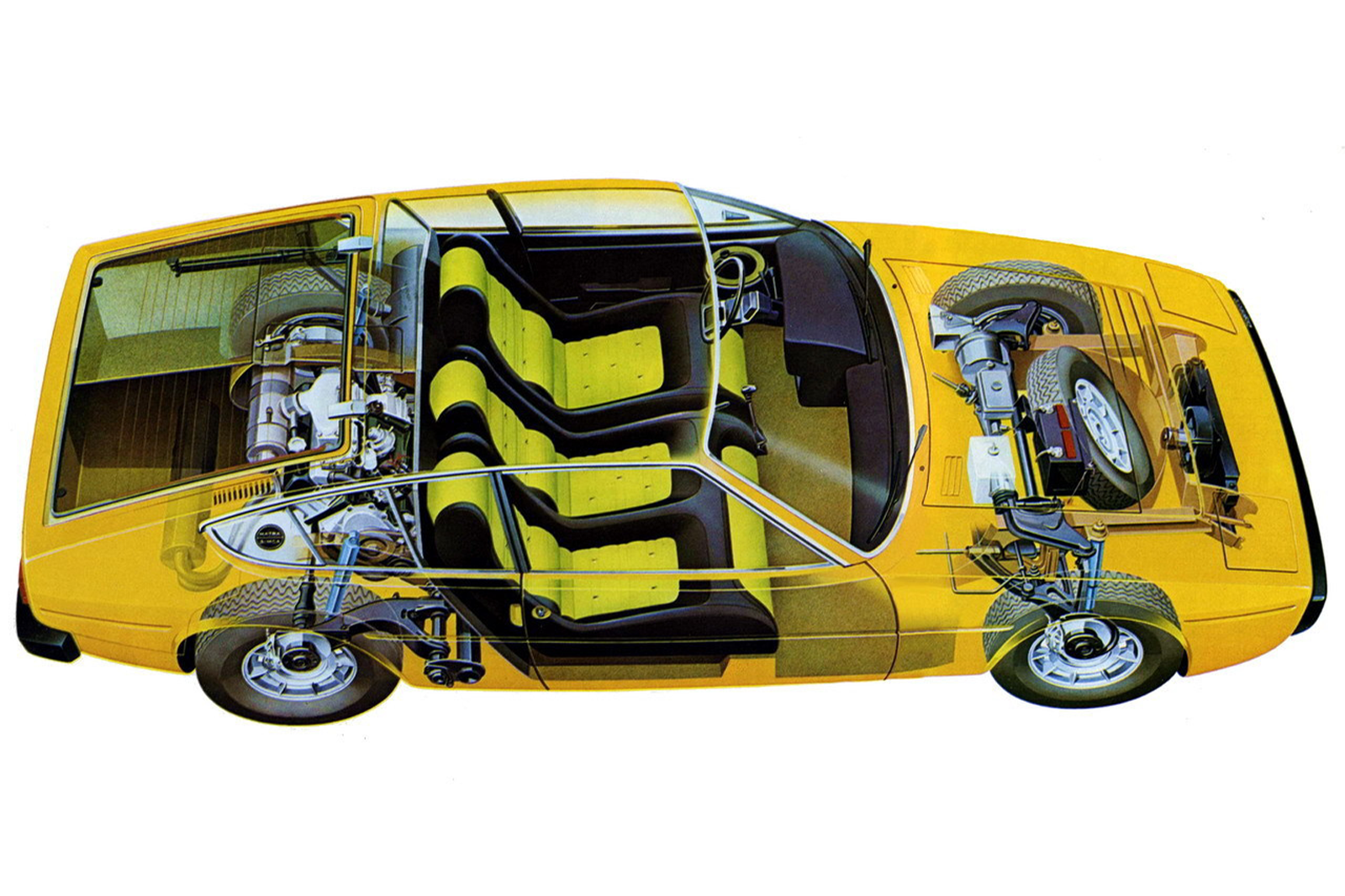 Indeed, the Bagheera's torsion-bar suspension was taken from the humble supermini, while its 1.3-litre petrol engine was lifted from the 1100 Ti, one of the earliest hot hatches. This motor provided 84bhp, peaking at 6000rpm, and 78lb ft at a high 4400rpm.

The gearbox, meanwhile, was a four-speed synchromesh unit. Steering was by rack and pinion, while all four wheels had servo-equipped disc brakes.

"As I walked towards the Bagheera it looked, to me, one of the fastest cars in the business," Eves wrote. "I almost felt like putting on a crash helmet. Had I done so, I probably would have badly damaged the car; I banged my head on the acutely sloped window pillar as I got in. However, there is plenty of room once one is inside.

"The driver's seat is fine, as is the outside passenger seat, while the middle would be fine for a child or a medium-sized chaperone. "The gear lever is quite heavily loaded towards the third and fourth position but, apart from this characteristic, which one soon accepts, it is quite positive and free from engine reactions.

"Despite brave attempts by the manufacturers to damp engine noise, it is apparent that the little 1294cc motor is working pretty hard as soon as you try to make the performance of the Bagheera match its appearance. To me, the car seemed reluctant to settle easily to more than 85mph, although obviously it is capable of more.

"On our test circuit, which calls for a good deal of gear changing and braking, I was surprised to find a perceptible twitch from throttle-on to throttle-off, and a similar reaction to sudden changes of direction, although at no time did this amount to instability.

"The car rode extremely well, although it did not hesitate to let you know, through the suspension and steering, when the road surface was less than smooth. Road noise is fairly high and so is feedback through the steering, which transmits surface irregularities more than one would wish. Nevertheless, the car held a good straight line over a rippled downhill section and braked in a straight line for the ensuing hairpin. 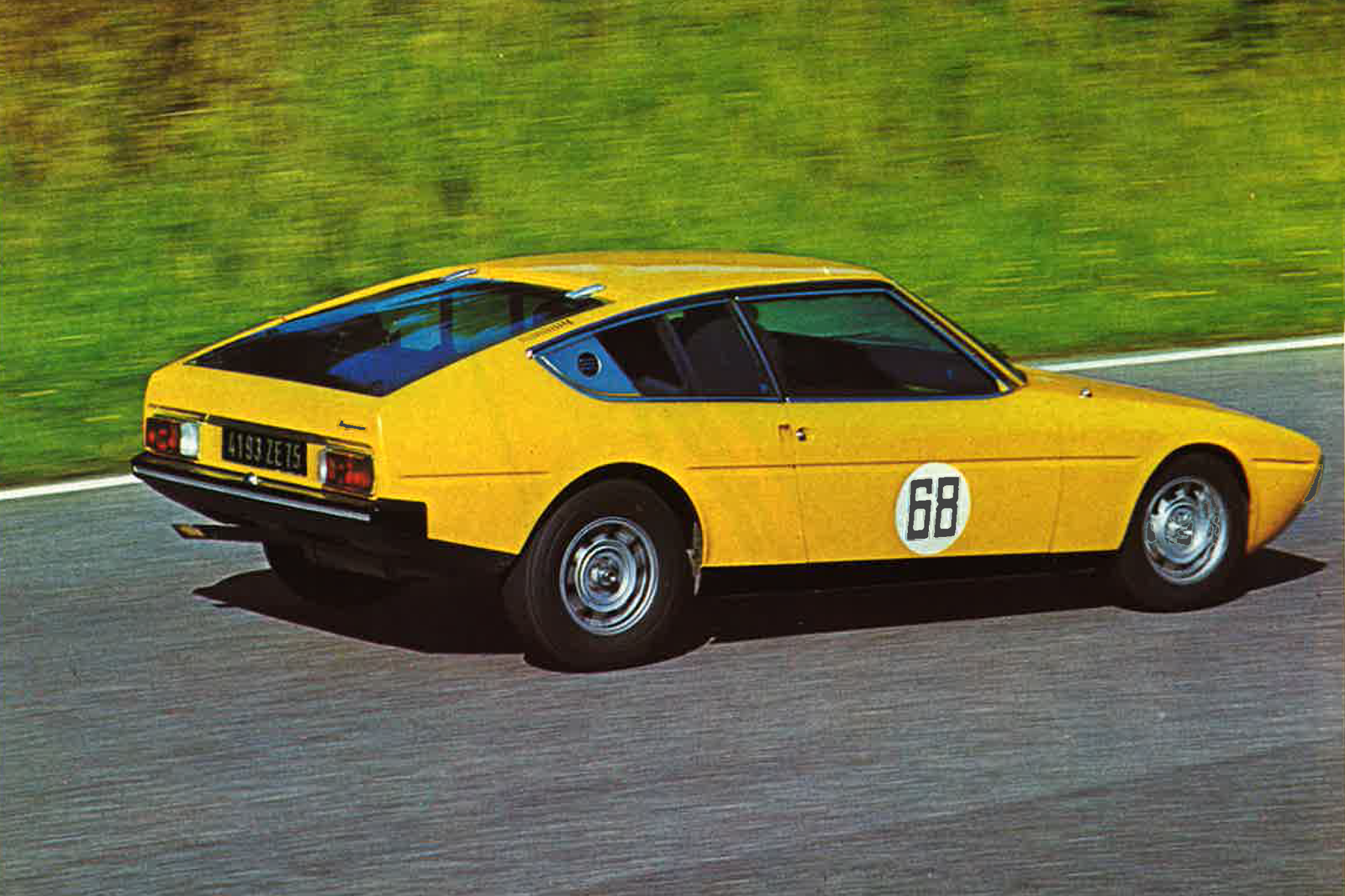 "It is clear that the handling and braking in no way belie the appearance of the Bagheera, although performance is in keeping with the engine size.

"Very few disadvantages derive from the configuration of the car. The three-seater abreast arrangement is quite practical and friendly. A boot that takes decent sized cases is located behind the engine and is backed up by more stowage beneath the bonnet."

Autocar concluded thus: "Because the Bagheera is intended to have a wider appeal than more exotic cars of the same configuration, it was essential that it should be as snag-free as possible. Chrysler engineers seem successfully to have achieved this. On short acquaintance, it felt completely without temperament and very practical to use. A young family man with sporting inclinations and an only child would find it an ideal, smart way of going about his business."

Unfortunately, despite the promise shown, the Bagheera was plagued by issues: initially of its innovative fibreglass body, the inconsistency in manufacture of which led to issues of fit and finish; mechanical failures; and rust, due to the almost completely ungalvanised steel chassis. As such, sales weren't strong, and Germany's ADAC gave it the silberne zitrone trophy, which was awarded to the most troubled new car.

Around 48,000 Bagheeras were built and a handful survive today in the hands of a passionate group of enthusiasts. In 1980, the car was succeeded by the more successful Porsche 924-rivalling Matra Murena.

I got to test drive a Bagheera back in 1980 when I was looking for something more interesting than a mainstream saloon, I quite liked it, but I was dissapointed that the steering was quite heavy, the particular car hadn't been looked after very well even though it was only 3 years old and maybe that was the problem.  I didn't find another to try and got a Fiat X1/9 1300 Special Series instead, I didn't regret it.

Matra were great and it's a real shame that they're no longer around,both the Bagheera & Murana were brilliant concepts mid engined and three abreast seating,now that's thinking out of the box,sure performance wasn't great but compared to what else was around at the time they were something special. Yes we all laughed at the Rancho after who in their right mind would buy a psuedo 4x4 that wasn't only FWD, Forty years later well who isn't offering a crossover!. Then Matra had it's partnership with Renualt producing the first proper European MPV the Espace then the unbelievable Aventime,yep true originals

There must be someone out there who replaced the 1.3 84hp with something more exciting. The potential was there