BACK TO ALL NEWS
Currently reading: Radical Audi Grandsphere concept will become next A8 in 2024
UP NEXT
2024 Mercedes C-Class EV spearheads brand's electric rebirth

Radical Audi Grandsphere concept will become next A8 in 2024

Audi has showcased elements of the all-electric and highly autonomous successor to its A8 luxury flagship with the futuristic Grandsphere concept at this year's Munich motor show.

Following the recent unveiling of the similarly future-looking Skysphere concept, the Grandsphere is described as a "private jet for the road" and, as is the case for the Skysphere and the forthcoming Urbansphere concepts, it is designed primarily around its capacity for level four autonomous driving.

The concept is said by Audi to be the closest of the Sphere trio to a future production model, in this case the 'Project Artemis' luxury flagship that will replace the A8 at the top of Audi's saloon car line-up when it goes on sale in 2025 after a 2024 debut. 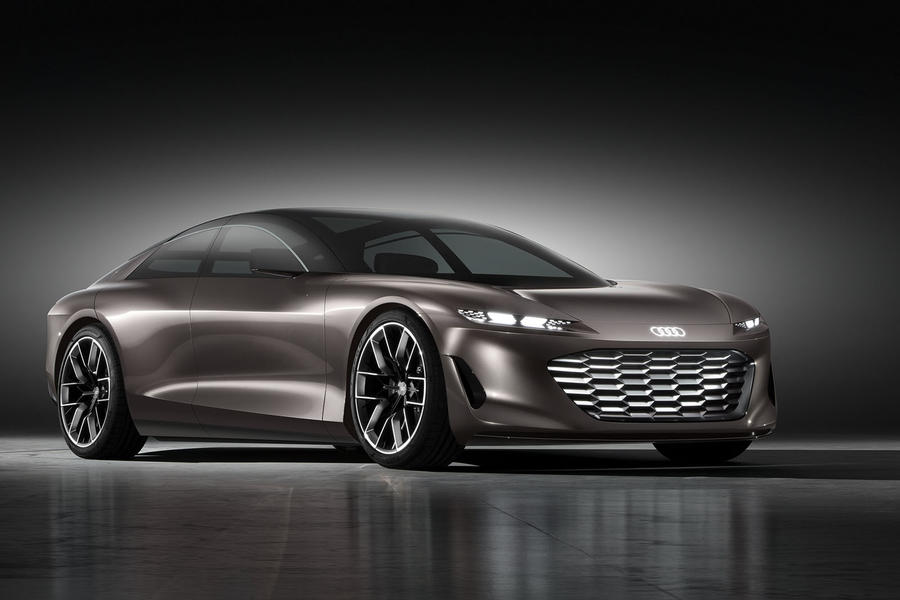 In keeping with its self-driving billing, the Grandsphere has been designed "from the inside out" to provide a lounge-style environment when no human input is needed to drive it. The steering wheel and pedals retract into the bulkhead, for example. The rear doors open backwards and there is no B-pillar to maximise cabin space and airiness. Passengers are welcomed aboard with "individually staged displays and ambient light" and the climate control and seats are automatically adjusted to their occupant's preferences as soon as they sit down.

The Grandsphere's infotainment system is programmed to resume content that was playing on occupants' portable devices prior to entering the vehicle. The driver's-side screen will display any unfinished news articles on entry, for example, and the passenger's screen will resume any unfinished videos.

"First class has now shifted to the front row," Audi says, as control of the car is now no longer expressly the preserve of the 'driver'. The front seats are, thus, designed for maximum comfort, with the ability to fold back by up to 60deg, although the expansive interior allows for a near-equally lavish set-up in the rear, where occupants sit on a sofa-style bench with a central armrest. This being a luxury-oriented concept, the air is filtered, temperature controlled and even scented, if required, and each passenger gets a set of speakers that are "inaudible to other passengers". Between the front seats is a cooler with two glasses and a specially designed drinks bottle. 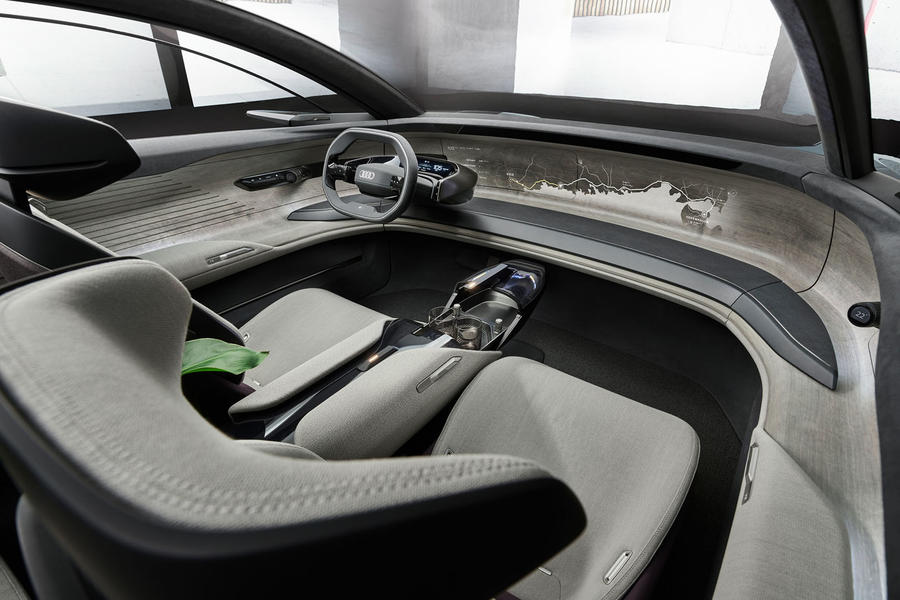 Notably, and unusually, there are no visible screens, dials or physical controls upon entry into the Grandsphere's cabin, where designers have striven to achieve a "digital detox". On start-up, projections throughout the interior show relevant data and displays to each passenger, while a sensor bar underneath the main front display allows for instant switching between tabs and a rotary-style MMI touch button can be used by the driver to cycle through menus. Eye movements and gestures can be used for the same functions in fully autonomous mode, and because the Grandsphere learns its users' preferences, it can eventually "give personal proposals" to each user.

At 5350mm long, 2000mm wide and with a wheelbase of 3190mm, the Grandsphere is a good deal larger than even the long-wheelbase version of the A8, but Audi emphasises that it is more a four-door GT car than a traditional saloon, with a sleek silhouette that comes "straight from the wind tunnel". As such, it features a long bonnet despite its electric underpinnings and the rear is heavily streamlined for optimal aerodynamic efficiency. It's unclear how closely related the eventual production car will be, but it will almost certainly lose the outlandish 23in wheels.

The concept uses the PPE platform, developed in partnership with Porsche, which will underpin the new Q6 E-tron and Macan EV next year. It has a 120kWh battery capable of charging at speeds of up to 270kW and offering a range of more than 466 miles, and a twin-motor four-wheel-drive powertrain producing 711bhp and 708lb ft. Theoretically, it will do 0-62mph in just over 4.0sec but has a governed top speed to preserve energy. 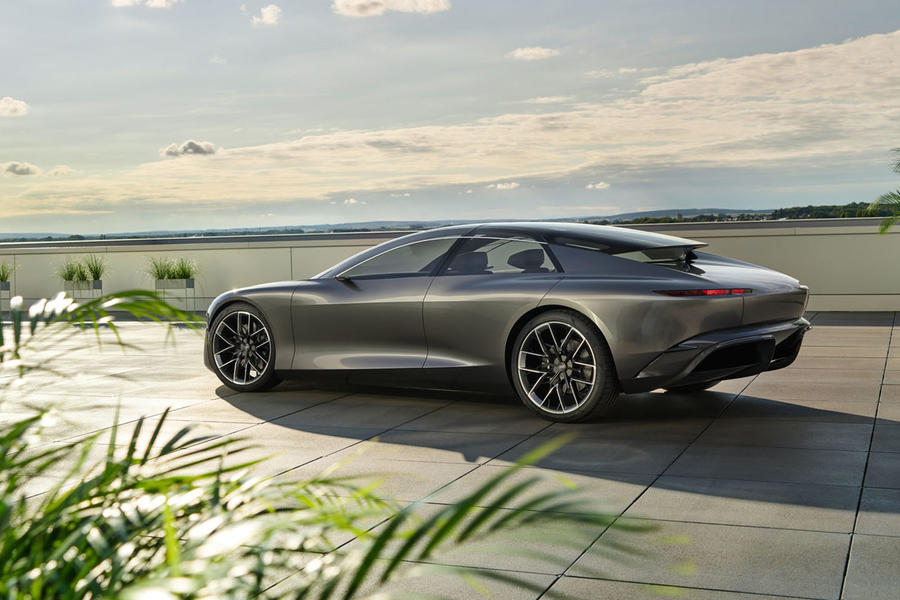 Audi admits that "the drive system and the handling are no longer at the top of the design specifications in this new generation of cars", but when Autocar asked if autonomous-capable cars will hold appeal for keen drivers, strategy boss Philipp Gündert said: "We are very focused on giving our passengers and drivers the freedom to choose. This car is focused on autonomous driving but of course we still want to keep that feeling and that close connection." He highlighted the "monocoque feeling" provided by the steering wheel and seat layout and said an occupant can decide if they want to “enjoy being driven” or still drive themselves. The Grandsphere has rear-axle steering, adaptive dampers and camera-controlled active air suspension, all in the name of conserving some dynamic agility, despite its size.

Although the Grandsphere majors on premium technology and providing a luxurious experience, its technology will trickle down to smaller cars in the new-era product line-up, potentially with an eye on ride-hailing services and shared mobility solutions.

"That's definitely what we're trying to do," Gündert told Autocar. "We'll figure out what's possible, what we and our customers want and how we envisage the future, and then of course bring it to smaller cars, for sure, but also for future solutions that go beyond possessing a car. We can also see that our target customers' understanding of progressive luxury doesn't necessarily mean to own a car any more."

Audi's third and final Sphere concept, the SUV-shaped Urbansphere, will be shown before next July and is expected to draw on elements of 2019's AI:ME concept, which itself previewed a compact electric crossover for the city.

Munich motor show 2021: all the new cars on show

Guys, guys , guys, this'll never get on the Road like this inside and out!, it's a concept, a collection of so called ideas, predictions, what Audi think want current and future Audi owners buyers to buy into, it's too long, the overall shape is like three designers put there ideas into a computer and this is what the computer spat out of the copier!, and we seem to going in the minimalist route inside, everything is hidden, the seating looks better than your in your House!, dare I say this is heading into RR maybe even Bentley territory?, and we haven't even covered performance, unless parts are made from unobtainium or some super light super strong material this thing isn't going to be lighter than whatever gen of A8 there is in two years time, still, two years is two years, they've got time.

So this is Audi thinking it's throwing down a 'hold my beer' moment to MB's EQS and they, in return say ' what for three years? And even then you're not grown up enough to drink'.

So this is Audi thinking it's throwing down a 'hold my beer' moment to MB's EQS and they, in return say ' what for three years? And even then you're not grown up enough to drink'.