BACK TO ALL NEWS
Currently reading: Porsche Mission R: A taste of motorsport's bold electric future
UP NEXT
New Kia EV9 primed as premium electric range-topper

You can hide a lot of things behind some racing numbers, it seems. How else to explain why car makers are so fond of using motorsport concepts to preview future production cars?

That certainly seems to be the case with the new Porsche Mission R Concept, which you might have noticed is rather similar in length, width and height to the current 718 Cayman. And while Porsche bosses won’t actually comment on whether it previews the forthcoming electric Cayman, what they do offer is the sort of knowing grin and non-denial that leaves some pretty big lines to read between. But even if the Mission R does point to the future of the Cayman, the racing livery isn’t just there as a disguise, unlike with some concepts. Instead, this concept offers a tangible, real and very serious look at the not-too-distant future of customer Porsche racing.

While Porsche is best known for its works motorsport projects, as demonstrated by 19 outright Le Mans 24 Hours wins, its Motorsport division has a hugely successful customer racing business. Customer 911s can be found racing in just about every level of GT endurance racing, and below that sits the firm’s portfolio of hugely successful one-make racing championships.

The Carrera Cup started in 1986 in Germany, and there are now some 30 series running in various countries – including the Carrera Cup GB, which supports the British Touring Car Championship. The headliner is the Formula 1- following Supercup, which this year brought in the 510bhp 992-generation 911 GT3 Cup.

Porsche boss Oliver Blume says “motorsport has always been a benchmark for our future development”, which is why the Supercup has switched to more environmentally friendly synthetic fuels for this season. But for motorsport to be relevant for Porsche’s future development, electrification has to play a key role – and beyond the firm’s works Formula E squad and forthcoming return to the World Endurance Championship (which includes Le Mans) with a hybrid hypercar. 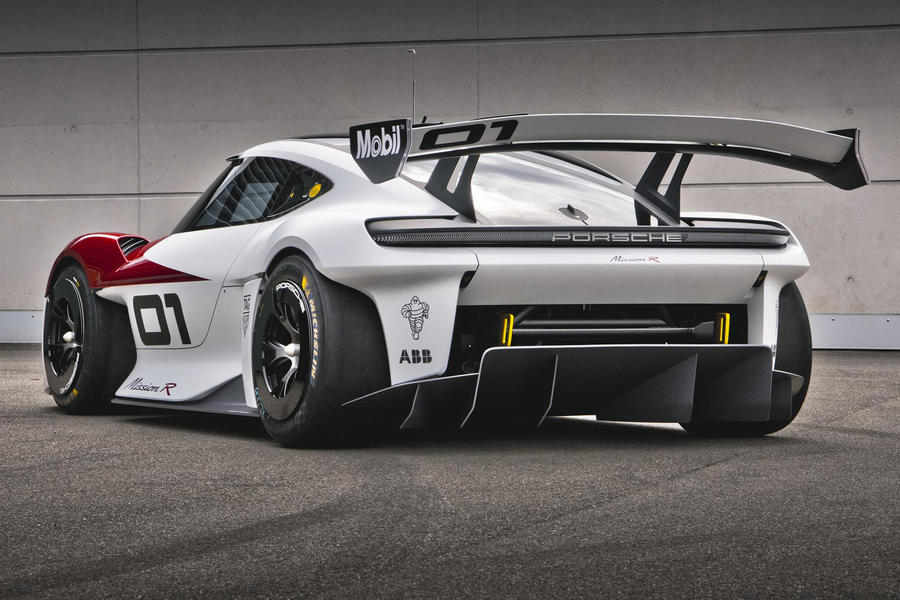 And so we get to the Mission R, which Porsche seems very serious about using as the basis for a one-make racing championship, alongside the Carrera Cup, from 2025 or 2026. That would truly make it the first of its kind: while there has been a one-make electric racing championship before, the short-lived Jaguar I-Pace eTrophy used essentially production-spec cars. While that series was canned due to the pandemic, it proved worthwhile for Jaguar: insights from battery cooling for cars in the series led directly to software updates that extended the range of the road-going Jaguar I-Pace.

Any future series for the Mission R would take that to the next level. Like the 911 GT3 Cup, this is effectively a bespoke racer that shares some design principles and traits with a likely road car. It’s effectively the first project that really imagines what customer electric racing might look like.

“Working with Porsche’s design department, we had around nine months to work on the project, so it wasn’t possible to create a completely new mid-engined single-seater with an X-Wing Fighter-style design or something,” says Matthias Scholz, Porsche Motorsport’s GT racing boss. “Not everything on the car was matched to current FIA safety regulations and so on, but we had the intention to make an electric GT racing car that really could race in 2026 or so.”

With the aim to match the GT3 Cup car in terms of performance, Porsche knew that managing weight would be a key challenge for an EV. That’s partly why the car is smaller than the 911, at a similar size to the current Cayman (the steel body of which was used as the prototype’s basis). Porsche maintained the mid-engined feel of the Cayman by putting the 80kWh battery roughly where the petrol engine would normally be.

“We wanted a car that was really low in terms of drag, so the silhouette should be as low and flat as possible, which means you want the driver sitting as low as possible in the car,” says Porsche technical chief Michael Steiner. “That means there’s no space for a battery below the driver. It’s one reason why a lot of super-sports cars today have a mid-engined design. With today’s battery cell technology, the heaviest part of an electric car will be the battery, so by putting it where the engine currently is, packaging- and centre of gravity-wise it’s more or less the same.” 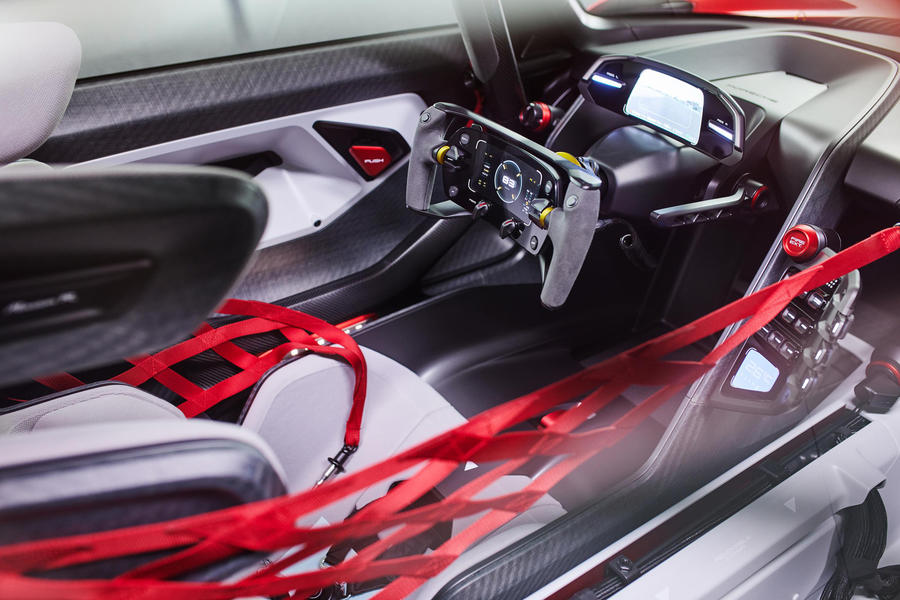 The Mission R is powered by two motors: a 429bhp one on the front axle that’s used largely for energy recuperation and a 644bhp one on the rear axle. Together they offer a consistent 603bhp in standard driving mode, which can be raised to 1073bhp in qualifying mode. The sub-2.5sec 0-62mph time and 186mph top speed are intended to match the current 911 GT3 Cup.

Key to making the Mission R feasible for racing is rapid charging. With an 800V electrical architecture, the Mission R can be charged at rates of up to 350kW, enabling a 5-80% fill in 15 minutes. And the battery has been designed to last for 35-40 minutes – about the length of a current Carrera Cup race. This is a serious electric racer designed to equal the performance of a petrol counterpart.

The carbon-cutting credentials of the Mission R go beyond its powertrain, too: the car also makes extensive use of recycled materials and 3D-printed components, particularly with the natural fibre reinforced plastic (NFRP) composite body.

“This car is a message that we want to do motorsport in the future as well,” says Scholz. “So we’re thinking about how we can do motorsport producing less CO2 for the world.”

The Supercup has switched to environmentally friendly e-fuels this year, and Scholz said that feedback from the teams involved played a part in developing ideas for the Mission R. “When we announced that we would use e-fuels, Supercup teams told us that this would help them to find new partners and sponsors,” he says. “It’s getting more and more difficult for teams to find sponsors and partners for projects that aren’t sustainable or where there’s no sustainable aspect. Sponsors are really looking for a project like this.”

Scholz believes that a Mission R championship could attract a wide variety of entrants. “It’s a really interesting question we wanted to find [the answer to],” he says. “We think it will attract some of our existing, let’s say petrolhead, teams as well as new customers who currently don’t race because it doesn’t fit with their message.” 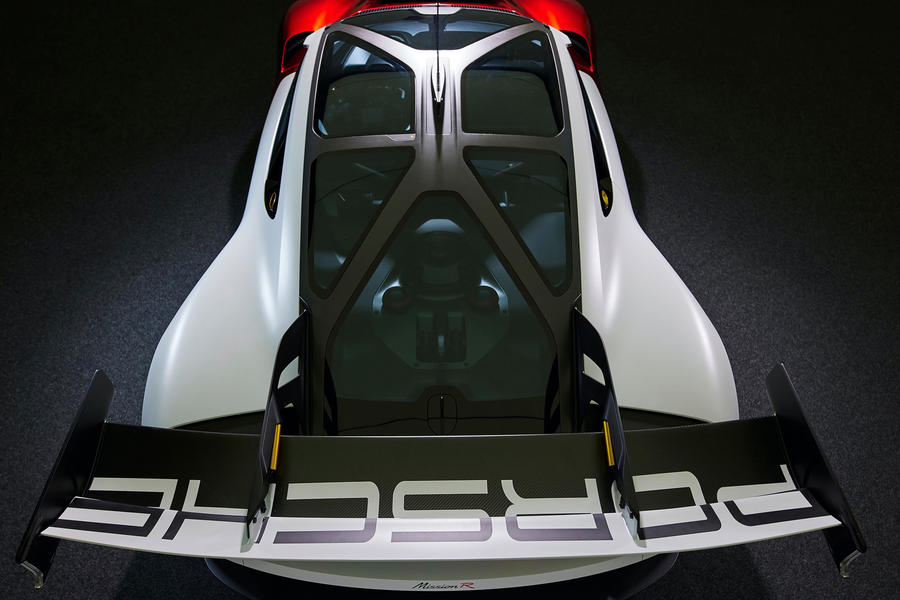 Scholz is also clear that the Mission R series would run alongside the Carrera Cup; Porsche Motorsport clearly isn’t going to drop one of its biggest successes so quickly. “This concept isn’t intended as a substitute to the Carrera Cup,” says Scholz. “We don’t want to stop racing combustion engines any time soon. This is additional.

“I’m proud of every 911 Carrera Cup car that we produce: our GT cars are beautiful things, and I hope we can race them for as long as possible.” For that to happen, it’s vital that the Mission R series can attract new teams and new drivers – and Scholz hints that Porsche is considering how electric motorsport could use a different format to better suit the technology involved.

“With this project, we don’t stop thinking with the car,” he says. “It’s a question of finding the right race format: we could look at the likes of gymkhana and things that are really different. We don’t just want to copy the Carrera Cup but with electric motors.”

Scholz is particularly keen to look at how the Mission R series could link to esports, partly because younger drivers currently involved with virtual racing might look more to electric motorsport in the future. He notes that the seat of the concept was designed so that it could be easily replicated for a simulator.

Of course, while the Mission R prototype has already taken to the test tracks, its one-make series remains conceptual for now. The high cost of producing cars means that it could only be viable if the platform is also used for a larger-volume road car – such as, say, an electric equivalent of the Cayman. But now we’re getting ahead of ourselves again...

What was it like having the freedom to design a race car concept without a current road car equivalent?

“It’s always fun to design a car, and if it’s this kind of concept car, you have more freedom. And then when it’s a racing car, it’s even more exciting. The challenging thing was that for customer racing sports cars, there always has to be a possible connection to a production car.”

Is this a pure concept car?

“It’s never a pure concept: whenever Porsche does something like this, there’s a high degree and level of visibility. So there are some cornerstones, basically, that give orientation.”

If this concept did inspire a race car and then, in theory, a production road car, what design elements could be retained?

“I admit that some of my favourite elements won’t make a road car, since it’s purely racing. The side sections of the car with the big air intakes are pretty radical and purely racing. But everything above the centre line of the car – if you look at the headlights, the design at the tail end and stuff like this – this is based on our Porsche design DNA.”