BACK TO ALL NEWS
Currently reading: DS 3 Performance long-term test review: a great driver's hot hatch
UP NEXT
Hyundai i10 EV successor primed for 2024 launch

Who needs all four wheels on the deck when you can corner on just three?
Open gallery
Close

I can't tell you how great it is to be back in a car that cocks an inside rear wheel.

Since the DS 3 Performance’s ride is firm and the rear in particular is stiff, if I want to mimic a peeing dog, I simply flick the wheel right or left at pace and up goes the back. Hilarious.

It’s useful, too, because if you’re really pressing on, that lifted inside rear makes the back end significantly more agile. But mostly it’s just great, childish fun, and a trait that sets the best driver’s hot hatches apart from the average ones.

I like the suspension set-up in the Performance. Some might say it’s a little too firm for urban driving, but it certainly gives the car focus. The 3 never stops reminding you that it’d rather be out on a B-road. It’s because the damping has a hardened edge to it – the sort that has the body settled back in its default setting fractions of a second after a heavy compression – and because there’s just so much grip. The car’s Michelin Pilot Super Sport tyres are the same sort you get on a Porsche 911, and in the dry, I’d say they really make this car. 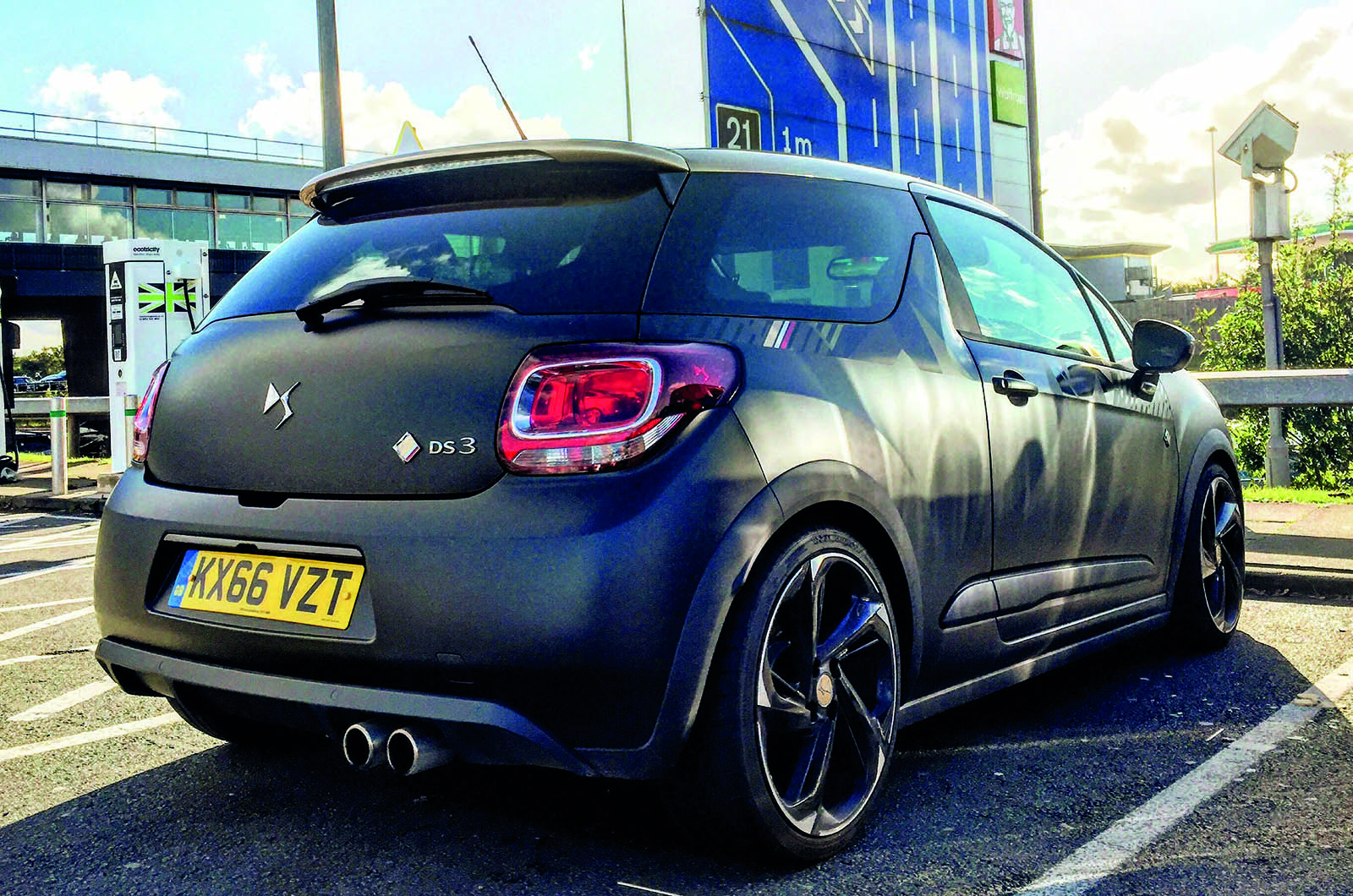 Thanks to their adhesion to the tarmac, even though it isn’t the quickest hot hatch in a straightline, the 3’s overall point-to-point pace really is as good as it gets in this class. Combine the grip of the front wheels with the agility of the back and you can hammer into a corner, hard on the brakes, flick the wheel towards the inside and the car will dart towards the apex like a puppy chasing a thrown ball.

I’m yet to push to the absolute limit – that’s something I’ll be doing on the track in the coming weeks – but at seven or eight-tenths, the 3 is a very enjoyable drive. Whether it can beat the best in class, the Ford Fiesta ST, I can’t say yet (I’ll need to drive them back to back to offer an accurate verdict), but it’s got to be close.

As many readers here know me for sme years and the fact I was many moons ago a hard assed financially retarded rallyman. For 12 years I raced and emptied my pockets to the greatest thrills and an adrenaline rush that lasted weeks. Reading this irresponsible blah from an overhyped idiot is nothing short of criminal. You DO NOT encourage any driver (not even a rally driver) to attemp peeing dogs mode on public roads. They few who can do this forget the scares it puts through Mrs Bluerince who over reacts to your stupidity and she ploughs into a bunch f folk waiting at a bus stop or at the very least she swerves losses control and wraps her metal broomstick round a tree. AUTOCAR you need to stamp this lunacy out. People do NOT go to buy a set of wheels to practice dog peeing. Why not write about the reality of this French rubbish. It is harsh brash uncomfortable and never relaxing and after 3,000miles things will fall off it and servicing it needs a 2nd mortage and at 35mpg you have to be nuts!
yvesferrer 2 February 2017

Cocking an inside wheel?

Yes, that is fun, on a circuit! or on a private road!
Not being a killjoy, inviting/inciting less experienced drivers to try this trick can lead to serious consequences.
By all means, do it where safety is tightly controlled and make it clear that the fun was not had at potential risk to other road users: a track day, as mentioned? and I will be with you 100%!