Subaru promises more emotion and comfort from its latest Legacy, but it will only be sold as an estate in the UK
Share
Open gallery
Close
Share story
News
by
1 min read

The all-new Subaru Legacy saloon has been revealed at the Chicago motor show, but UK bosses have confirmed it will be denied to UK buyers. However, a production version of the Subaru Levorg Tourer concept will make it to these shores.

The cabin is claimed to be more comfortable, with improved visibility, space and safety credentials. Subaru says there is a minimal increase in the Legacy’s external dimensions, but thinner doors and a relocated A-pillars has allowed an improvement in shoulder, elbow, waist and leg room.

The body and suspension mountings are more rigid to suppress roll and reduced friction in the shock absorbers, coupled to a new rear subframe and tweaks to the front suspension struts, takes steering stability and ride quality to that of the class above, says Subaru.

Power comes from a revised 175bhp version of the FB25 boxer engine used in the current Legacy and Subaru Forester. Modifications to the intake, exhaust and combustion systems have resulted in a torque increase to 174lb ft.

A 3.6-litre six-cylinder boxer engine is also offered, which develops 256bhp and 247lb ft. Both engines are mated to Lineartronic CVT gearbox. 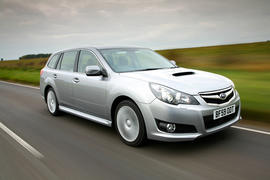 As a true workhorse, there are few better than the Subaru Legacy. As an everyday estate, there are loads better.

Sorry concinnity, but I wasn't sure whether you were saying that this car should come to the UK or that it's a dud and is best left in Chicago. It looks like we might get the Levorg instead which I think is likely to be more in the spirit of the last generation Legacy Tourer, a much admired car, rather than this or the current model.
docM 9 February 2014

I agree that Subaru UK's marketing is inept, and their importer doesn't seem to understand the UK market either. But this is a North American launch for a car that will not be coming to the UK, except as an Outback. Subaru don't need to be taught anything about marketing in the USA - they've got it completely sussed.
concinnity 9 February 2014

Subaru appears to not have a clue how to market their cars and their heritage in the UK. Maybe their marketing people are lazy, or just inept.
View all comments (8)