BACK TO ALL NEWS
Currently reading: Land Rover Defender: meeting the man behind JE Motorworks
UP NEXT
Rodin FZero: V10 weapon aims to be world's fastest car

There’s more demand than ever for modifications to Land Rovers, and Jonathan Douglas probably knows more about it than anyone. We've gone to Coventry to find out what he does
Open gallery
Close

JE Motorworks, on the outskirts of Coventry, barely a mile from the base of what is now Jaguar Land Rover’s Special Vehicle Operations performance tuning department, is a company that might have put what we now know as SVO out of business before it even got started.

It will be a name familiar to anyone who deals in extra-special Land Rovers. Established in 1975 as a fairly small-scale garage by former proprietor John Eales (whose initials the company still carries), JE earned itself a reputation throughout the 1970s and 1980s for rebuilding, tuning and enlarging Rover V8s. They were used to power Morgans, TVRs, Rover SD1s and, of course, Range Rovers.

“JE’s tuned engines were so good at the time that Land Rover copied one,” says Jonathan Douglas, JE’s current managing director and chief engineer. “After that we did a 4.2, which was the engine for the popular Dakar Range Rover. About 100 were made throughout the 1980s, but that was long before I got involved. 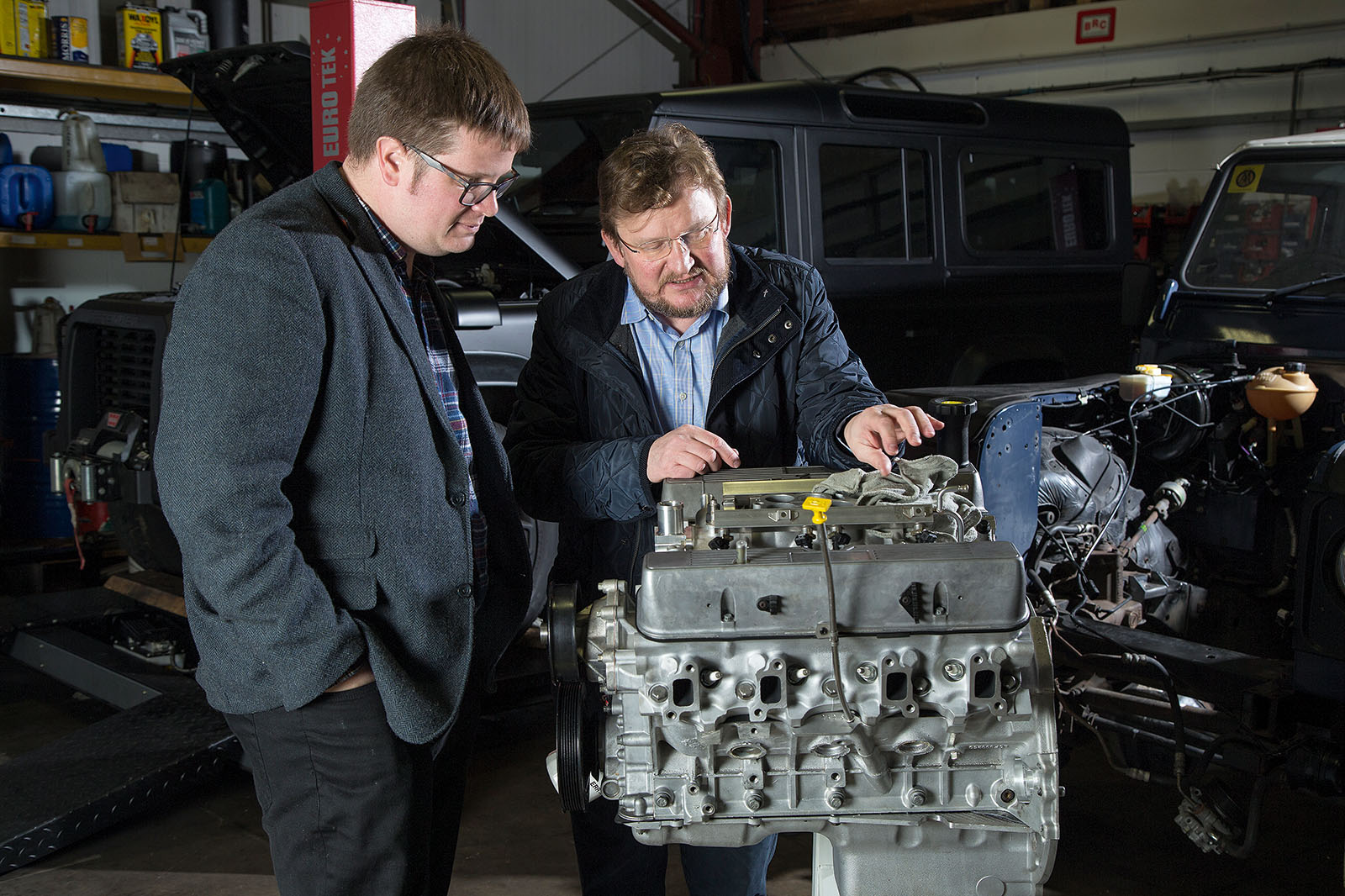 “Later, after I joined the team, came our 4.7-litre supercharged Range Rover ‘P38A’. It was as close a car as you’ll find to an unofficial prototype for the modern Range Rover Sport, I suppose.”

Douglas is explaining how the firm he ended up owning and running went from making its reputation with go-faster Range Rovers to now offering perhaps the most complete set of mechanical modification and upgrade programmes available anywhere for the SUV that the car collecting world has suddenly gone mad for: the Land Rover Defender.

Douglas is a fascinating bloke and a proper autophile. A mechanical engineer by trade, his early career was spent building racing engines for Jaguars and Morgans, the latter acquainting him with the Rover V8 that would figure so prominently throughout the rest of his working life. He became involved with JE’s sister company ITG in 1987, then with JE in the early 1990s, just as Land Rover legend Charles ‘Spen’ King become a JE director.

“I ended up owning both ITG and JE by the end of the 1990s, as my predecessors retired, sold up or gave up their interests,” Douglas, plainly a reluctant manager, explains. “It was always my intention to have an interesting but laid-back life engineering for someone, but I found I had to be a businessman anyway. These days, I delegate as many of the organisational tasks as I can, to try to keep free for the engineering.”

It was during the 2000s, having also got into diesel ECU tuning for the Discovery, that JE’s business became dominated by the Defender. “The L322 BMW-engineered Range Rover became such a good basic product that tuning it was difficult,” Douglas says. “But the Defender was a constant for us. There was a call for ECU tuning on TD5s, but now we start with suspension and braking upgrades and move up through automatic gearbox conversions and V8 engine conversions. Finally, there’s the fully converted Zulu.” 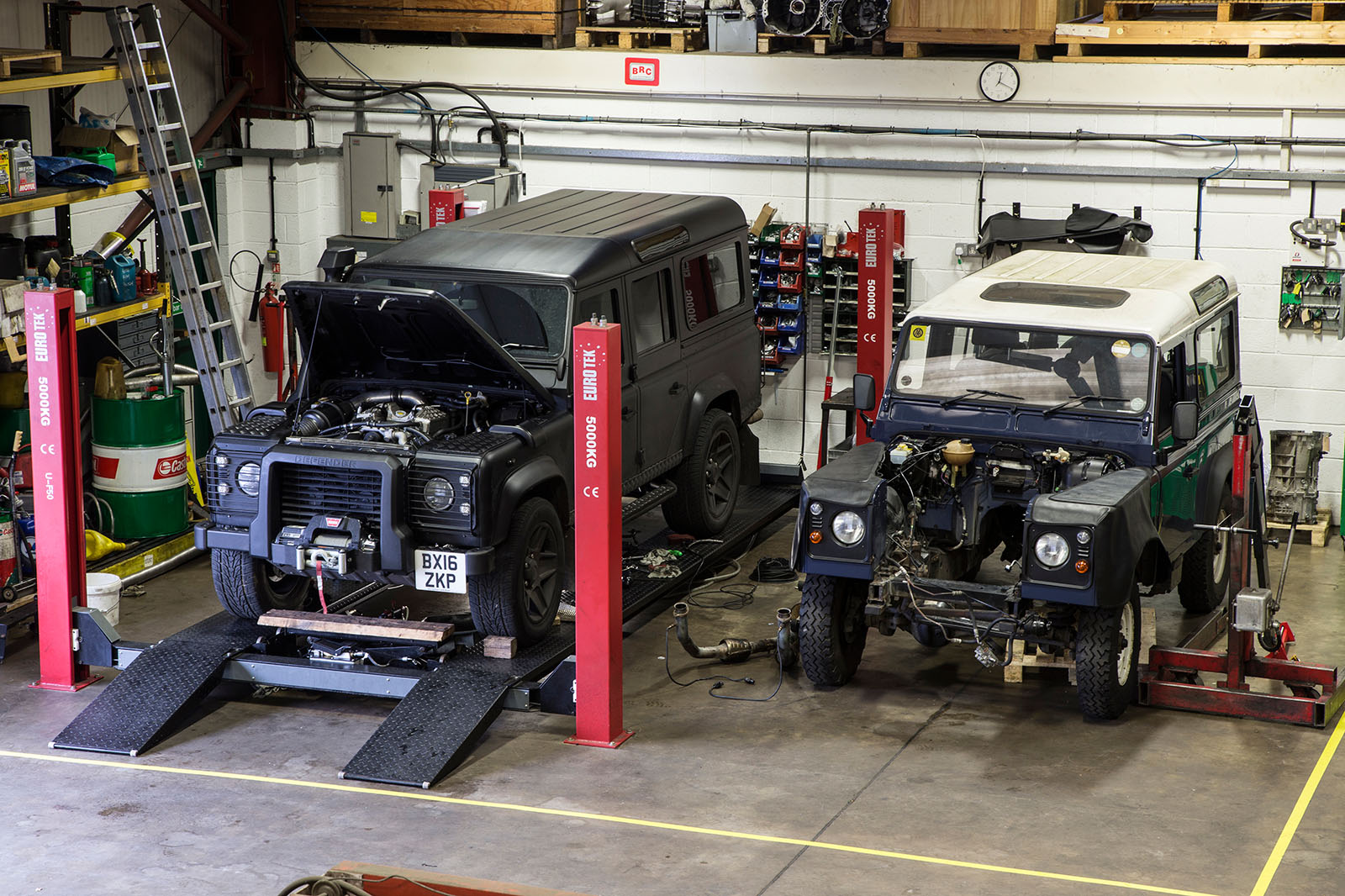 What he’s is referring to is a £150,000 fully converted Defender, powered by a 475bhp supercharged 4.7-litre V8 and able to hit 60mph from rest in less than five seconds.

So what does Douglas make of what’s currently happening to the Defender market? “When production finished, our business went flat for two months – as if every Defender owner in the country held their breath for a moment and wondered what might happens next,” he says. “But then the demand exploded.

“We deal with four kinds of owner. There are those who run working cars, use them off-road and for heavy stuff, and want to continue doing so. There are enthusiasts who do a bit of off-roading but also want to make their cars more usable. There are collectors who love their cars and just want the perfect example. And there are the super-rich who have to have one right now and want it to make the biggest statement possible.”

Where will the current frenzy end, and will Defender prices to continue to sky-rocket? “No – there are simply too many Series IIs out there for them to become too expensive,” he says, reassuringly. “You can still get a very good one for £15k and I suspect you’ll always be able to. They’re huge fun to drive.” Not fast or what you might call ‘nice’, he suggests, “but if you want that, you buy a modern car”.

That, or you take your Defender to JE. “We’re currently doing about eight automatic gearbox conversions a month,” Douglas says. “And while the Rover blocks are getting hard to come by, we’re converting about five Defenders a month with rebuilt V8s, to go all over the world. We’ll make about five Zulus this year. And there’s the business-to-business work, which I’d better not talk about…. Lots only do a cosmetic job – and plenty do that better than us. But those that are doing proper engineering don’t often do a balanced job.”

“We don’t have 20 engineers working for three years on the windscreen wipers, but we do try to provide a car like one you might buy in a showroom – one that’s been rethought from the bottom up.”