BACK TO ALL NEWS
Currently reading: Lunaz to electrify commercial vehicle fleets in UK
UP NEXT
New Range Rover PHEV brings 70-mile EV range for £103,485

The facility, which will be based at the Silverstone Technology Park in Northamptonshire will aim to produce 1100 heavy industrial vehicles a year and will create 300 highly skilled jobs.

Lunaz, which has experience electrifying classic cars, says the plans will grow its manufacturing footprint by 400%, while the facility itself will help save 44,000 tonnes of CO2 per year.

“Ours and previous generations built billions of vehicles. Now is the time to realise the potential of remanufacturing to break the replace-with-new cycle by electrifying them for future generation,” said David Lorenz, the founder and CEO of Lunaz.

“Lunaz’s commitment to establishing the UK’s largest remanufacturing and electrification facility is just the start. We look forward to many more globally as we plot a more sustainable course to vehicle decarbonisation."

The firm says electrifying existing vehicles helps to plan a more sustainable future and that the new facility will target the industrial, commercial and passenger vehicle fleets.

Lunaz also claims that money will be saved and production levels of carbon reduced, as remanufacturing vehicles costs around the same as their diesel counterparts. Vehicles will also be substantially overhauled to a standard that means they can be warrantied as if they were brand new. 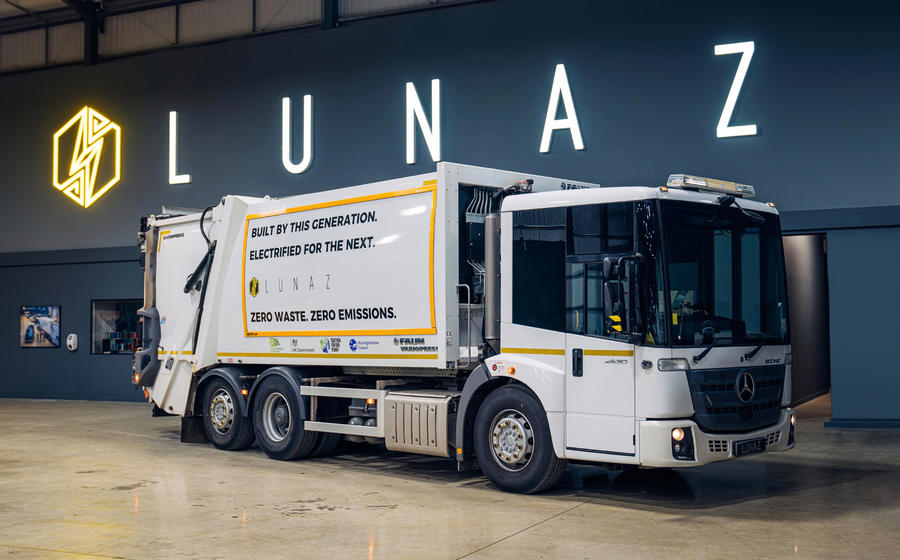 “This provides fleet owners with all of the cost and ecological benefits of an upcycled vehicle with the same functional performance and reliability as a brand-new equivalent,” Lunaz said.

“The approach represents a comprehensive process of remanufacturing. Every component is upcycled to a factory standard with a clear focus on reducing waste.

“This is a clear answer to the pressing global requirement to reduce carbon emissions. Lunaz employs a remanufacturing approach, because it preserves nearly 80% of the embedded carbon within a vehicle, therefore breaking a replace-with-new cycle which sees millions of tonnes worth of functioning vehicles end up in landfill every year.”

The facility has the backing of Buckinghamshire Council, which recently signed an agreement to further explore remanufacturing and electrification of its fleet of diesel refuse trucks.

“As a council, we're fully committed to doing all we can do to cut our carbon emissions, and we know that converting our diesel and petrol vehicles to electric power as soon as we can would be a giant step towards doing that,” said council leader Martin Tett.

“Together we hope to explore the best ways for converting our existing fleet of vehicles to electric. Rather than scrapping them and buying new, the innovative technologies being developed and employed by Lunaz will help us to use a much greener option: to effectively upcycle and rejuvenate our current fleet to fully electric vehicles.”

Lunaz says its new technology is suited to the existing systems currently in use by these vehicles, saving “significant capital expenditure”, possibly with up to £1 million retained in fuel costs alone.

Lunaz, which recently received investment from former England footballer David Beckham, also has plans to expand into major markets in Europe and the US.

Embedded carbon, carbon footprint, call it what you will, but it is impossible to calculate with any degree of accuracy as there are literally thousands of factors to be considered and measured. So companies can be horribly deceitful and it has led directly to scams such as biomass fuelled power stations eating up parts of the Amazon rain forest and the laughable claims by Porsche etc that efuels / synthetic fuels are environmentally friendly.

Yes! This is the future, both for the future and Britain's economy.

Importing a new EV might make you feel smug and allow UK government to fiddle the books on CO2 emissions, but this is better.

Finally, a company doing more to actually consider the impact of new products on the environment - and actually take action directly to avoid!

Finally, a company doing more to actually consider the impact of new products on the environment - and actually take action directly to avoid!

I mean Tesla produces an annual ESG report that details the embedded carbon in their vehicles. Which incendentally is basically the same as for an ICE of equivilent weight (14 tonnes per Model 3). But don't let that get in the way of a rant.

TBH this could have been a place where UK government could have lead about 10 years ago.

Service HGVs have usage paterns that easily match a single charge per day and I think everyone is annoyed by thr howling turbo diesel that most bin lorries have.