BACK TO ALL NEWS
Currently reading: Turbocharged 454bhp Radical RXC unveiled at Autosport show
UP NEXT
How the Bugatti Chiron became the first 300mph road car

A new turbocharged version of the Radical RXC has been revealed at the Autosport International show in Birmingham.

The new car uses a twin-turbo 3.5-litre V6 Ford EcoBoost engine, as opposed to the standard car's naturally aspirated 3.7-litre Ford V6. Power has increased from around 375bhp to 454bhp, while torque has increased from 320lb ft to 500lb ft.

The extra power and torque allows this latest version of the RXC to sprint from 0-60mph in 2.6 seconds, which is 0.2 seconds faster than the current car. Its top speed has also increased from 175mph to 185mph.

First unveiled at London's Motorexpo show last summer, the Radical RXC is the firm's first fully enclosed racer. Radical officials have told Autocar the company plans to produce up to 50 cars per year, while company owner Phil Abbot says Radical will look to extend its partnership with Ford and its EcoBoost engines in the future.

Abbot said: "We found people were wanting a long-life engine, which meant we turned to Ford and its EcoBoost. Rather than further tune the standard engine and reduce its life, we chose a new long-life engine and upgraded the boost.

"We would like to extend the partnership [with Ford]. The EcoBoost technology is a great all-round package for us. In the back of my mind there's already a new EcoBoost model in our range." 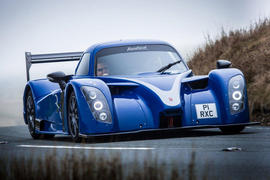 Not that I'm in a position to spend 120k on a track day toy, but I hope the turbo engine doesn't spoil the instant response and the high revs that you need on a track.
TBC 9 January 2014

It might also be interesting to see one up against a GT3; David and Goliath anyone?
Lanehogger 9 January 2014

It might also be interesting to see one up against a GT3; David and Goliath anyone?

With its sports-prototype inspired styling and aerodynamics, coupled with the extra power and low weight, I suspect the Radical would destroy a GT3, and indeed many other supercars and hypercars, especially around a track.

I always thought the 3.7 was a good starting point for the RXC, I also suspect this isn't the end; interesting days ahead for Radical........