BACK TO ALL NEWS
Currently reading: Cropley on cars - TVR deserves to succeed, Zenos shows big ambition
UP NEXT
New Hyundai Bayon to launch in 2021 as entry-level crossover

TUESDAY - Early sprint up the M1 to Cosworth, to watch the bosses of the new TVR company, Les Edgar and John Chasey, fire up their new car’s Le Mans V8 engine for the first time.

It was a stirring occasion, not just because of the epic way the engine performed and sounded (at one stage, the dyno shut itself down because torque exceeded anticipated limits) but for the joy on the faces of the company’s backers, car lovers of the highest order.

As anyone in business knows, you have to wade through plenty of boring stuff to set up a new car company, but this was definitely one of the better parts of their job.

The fire-up was great news for prospective TVR buyers, too: Chasey and Edgar insist there will be a clear and simple relationship between the car you buy for the road and the edition they race at Le Mans.

As for Cosworth, it’s years since I’ve visited the famous Northampton-based engine maker. It was a bit of a shock to see how rapidly the company has developed into a highly mechanised maker of ultra-high-tech components.

WEDNESDAY - Into central London to meet Mitsubishi’s chairman and CEO, Osamu Masuko, who was in the UK to pat local employees and dealers on the back for lifting Outlander PHEV’s UK sales into the stratosphere.

Our interview was conducted through an interpreter, and such encounters can sometimes be a bit flat. Not this one. It was soon clear that Masuko-san speaks good English. He was also amusing and full of fascinating info.

Japan’s big interest in battery electric cars is helping to drive world electric car progress, he told me. In 2009, Mitsubishi’s new i-MiEV had a cruising distance of 93 miles and its battery cost £11,000. Now the figures are 124 miles and around £4000. Even quicker progress is coming, he says, with the pollution-hating Japanese government doing more than most to drive it.

THURSDAY - Quick visit to Zenos, the Norfolk-based sports car maker whose two founders used to run Caterham Cars. When they were there, the indomitable pair came up with a proposal for some impressive modern variants, but the shareholders didn’t adopt their ideas, so they set up a company of their own. This was my first sight of their terrific aluminium backbone chassis, and I must say I was deeply impressed.

Despite Lotus and its 50-year history at nearby Hethel, I still find it curious that such go-ahead companies as Zenos can thrive so far from The Smoke or what motorsport types call the Oxford Triangle.

FRIDAY - Departed the office for the weekend in a Nissan Pulsar – a car, I admit, I’ve made no special effort to get to know. Reason? Long memory, I suppose: Nissan dropped hatchbacks of this size in favour of SUVs after wasting years flogging boring and slow-selling iterations of the Almera. The Pulsar is a horse of a completely different colour.

It steers and handles really nicely, its powertrain is astonishingly refined, powerful and flexible – you’ll never believe it’s a 1.2-litre turbo four – and even with the front seat set for an outsized occupant, the amount of rear room defies belief. The prices seem about a grand too steep to me, but the bottom line is that Nissan builds good stuff these days, and here’s further proof. 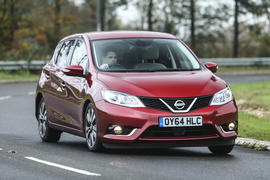 Superstevie, I couldnt agree more, there is no such thing as a really bad these days, bar the odd quirky exception, the C4 is a very decent car, that doesnt get enough press coverage, unlike a VW or Audi that get a full road test every time they they change the design of a cup holder. Likewise the Nissan Pulsar my wife had recently whilst her car was in for repair was a lovely thing, smooth, refined, easy to drive and comfortable, it may not be a plush or as squishy as a Golf or an A3, but its probably far better built (if not with the same "perceived" quality), and its also bound to be far more reliable for the average private buyer.
superstevie 12 October 2015

I would normally berate the

I would normally berate the Pulsar, but as I have been living with a car that most car mags haven't rated very highly, I have changed myy mind. My C4 has been a great car over the last year and a half (and nearly 60k), and I would hazard a bet that the Pulsar would also be a fine companion. A Focus will handle better, a Golf will have a nicer interior, but I bet a Pulsar woudl still be a good car for most people.
fadyady 12 October 2015

I would love to see the TVR and Zenos establish and do well.