BACK TO ALL NEWS
Currently reading: Polonez 1500: the Eastern Bloc's Ford Escort - Throwback Thursday
UP NEXT
Spending 48 hours touring in a Ferrari Roma

How did the Polish state-funded Polonez fare against rivals like the Chrysler Sunbeam, Ford Escort and Morris Marina? All is revealed in this 1979 Autocar road test
Open gallery
Close

If you were to ask a petrolhead which defunct car manufacturer they missed most sorely, their list would probably include the likes of Saab, Rover, Triumph, Lancia, and Fabryka Samochodów Osobowych.

Well, maybe not that last one. Communist Poland’s FSO made some well-known family cars back in the 1970s, but it wasn’t quality, drive, or looks they were known for.

FSO started producing the Polski Fiat 125P in 1968, which were Fiat 125s with running gear from the older Fiat 1500s underneath. Ten years later, it got hold of the mechanics for the 125 and put its own body on top, giving us the Polonez 1500.

On 17 March 1979, Autocar gave it the famed Autotest to see how it fared against its illustrious rivals: the Chrysler Sunbeam, Ford Escort, Lada 1600, Morris Marina and Skoda 120L Estelle.

“It is not political propaganda to point out that Russian-influenced states are not good at making cars (so far at any rate),” Autocar began.

“Interestingly and surprisingly, the understandable spark of Polish engineering pride seems to have been allowed to smoulder – Poles have a name for stubbornness – into work on FSO’s own, relatively, up-to-date hatchback body for the 125P, announced last year, and now on sale at of course the bargain price of £2,999.” 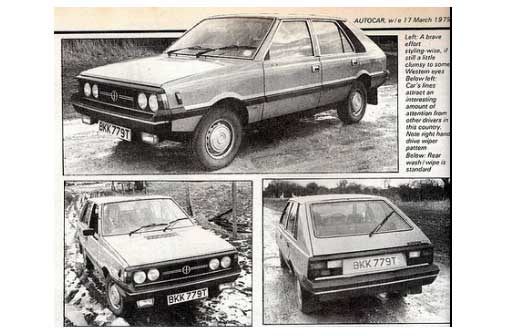 Performance form the 76bhp engine, we lamented, was: “Slower than the 125P, especially in acceleration.

“The new car managed a marginally quicker start but thereafter fell behind. It achieved 30mph in 4.2sec, and 80 in 39.1sec.

“It is a sadly noisy car. On starting up, you cannot help feeling that the starter motor is more inside the passenger compartment than under the bonnet.

“The gearbox leaves something to be desired: it has a change that is not up to modern standards, especially for a conventional box.”

Economy was described by Autocar as: “not much”. “A steady speed figure of only 33.7mpg at 30mph compares poorly with the competition,” we said, “which never does less than something over 40mpg.”

Road behaviour, meanwhile, was “coarse”: “The car does not encourage enterprising cornering with its high build and the relatively high seating: there is a slightly topply feeling to it, and it rolls fairly easily.

Ride is mediocre, but not noticeably worse than most of the car’s equally backward contemporaries. There is road noise, to an average degree, but the engine dominates all other noises.”

While Autocar commended FSO’s efforts, the interior fared no better.

“The first thing one cannot help noticing on getting into the Polonez is its smell,” we suspiciously said, “All cars smell, but this one smells particularly pungently; we couldn’t identify it, but suspect a mixture of rubber and plastic.

“The seats look good, but some testers found them uncomfortable."

Meanwhile, the front view proved more dangerous than annoying: “Front pillars are both thick and raked so that they obstruct more than one would like; in the wet, combined with the areas uncleared by the wiper blade, one must be careful to look for the pedestrian who may be hidden.”

For a family car, it was disappointing in terms of space, too. “Room in the back is a sad disappointment, with inadequate knee room and not enough head room.” 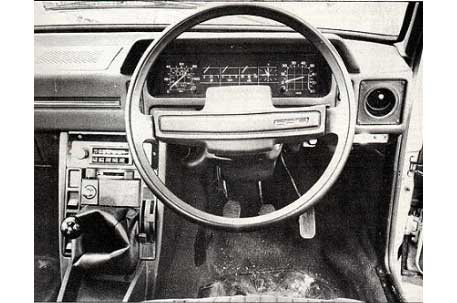 Sympathetically, Autocar’s tester said: “The disappointments on the Polonez are sad, because its makers have obviously tried hard in many ways, so that there are some good ideas. The very practical and heavy bumpers are one – clumsy maybe to look at but very good protection.”

Compared with rivals, the Polonez crashed and burned in Autocar’s opinion. “Of our selection of suitable cars tested, the British cars (by which we here include the Ford) are a notably better proposition, even though the small-engined Escort on paper barely keeps up with the Pole. The point to stress is that all three do what the Polonez does both to a near-equal or greater extent in performance with vastly greater refinement and efficiency. Sadly, there is really no comparison; they are 20 years ahead.” Even the much-derided Lada was deemed better.

We concluded by describing the FSO as “a very cheap, dynamically inadequate vehicle”.

Despite beating the risible Skoda, it failed to beat its nearest contemporary, the Lada 1600ES. “You pays the same money,” Autocar mused, “and you takes your choice. If you can excuse the faults they share, then the Lada is slightly the better of the two.” The Russian’s price of £2,999 included a very swanky cassette radio, too. What more could you want?

I purchased a used Polonez in 1980, and kept it for 3 mainly trouble free years. It drove regularly to the DDR, where it was a rarity; only the 125p was sold there. It travelled on the autobahnen of the DDR and the BRD, and I found it to be comfortable, spacious, and it had some character. It was not a very good starter in the winter, due to a small battery, so it was succeeded by a Lada 1600 saloon in 1983.

It is brands like these that made driving interesting, and yes i miss them, cheap and cheerful, i would love to see LADA back in the UK, it would only assist Renault in gaining a bigger foothold, they would then have five brands, Dacia, Renault, Nissan, Infiniti and Lada, add to that lets get Datsun back too, with there cheap and cheerful models and the Renault-Nissan Alliance will have a car for every niche from £6k to £100k+

Lets start the petition here to get Datsun and Lada back to the UK... LOL

The Polonez had one thing going for it

as according to Wikipedia page on the car -- it had far better passive safety than any other Eastern bloc vehicle, and may actually have been superior in those respects to number of Western made cars: "An advantage of Polonez is its passive safety. In 1978, it was the only East European car built to pass U.S. crash tests. Crash tests were performed in 1994 according to EU safety regulations so that the Polonez could be exported worldwide. They proved the car to be very safe. The Caro 1.9 GLD hitting a concrete block (without an energy-absorbing metal cage) with 40% of the front at 50 km/h (31 mph) survived very well. All doors could be opened without any difficulty, there were no critical injuries for passengers, and no fuel leakage occurred."
View all comments (10)