BACK TO ALL NEWS
Currently reading: Advertising Feature | The BMW M3 and M4: honed in the heat of racing
UP NEXT
New 2023 Porsche 911 GT3 RS is "most track-focused" ever

Advertising Feature | The BMW M3 and M4: honed in the heat of racing

Since the launch of the original BMW M3 in 1986, the iconic saloon has been as successful on the track as it has been on the road. Here’s the full story
Open gallery
Close

Ever since BMW won the Alpine Rally in 1929, racing success has been integral to the brand’s ethos.

Engineering experience gleaned on the world’s most challenging circuits, and from motorsport’s most gruelling races and competitive rivalries has contuinually helped make the BMWs we drive on the road more performance driven, more engagingly precise, and – most importantly – even more thrilling to drive.

With the introduction of the iconic M badge on the mouth-watering M1 in 1978, that modus operandi become ever more deeply ingrained. No BMW has reinforced this track-to-road philosophy more than the legendary M3. Always a beauty to behold, it came packed with the benefits of BMW’s motorsport involvement from the start, and so brought the M badge to a wider audience.

Today’s BMW M3 Competition Saloon and the sleek BMW M4 Competition Coupé are the direct result of that 40+ years of knowledge. 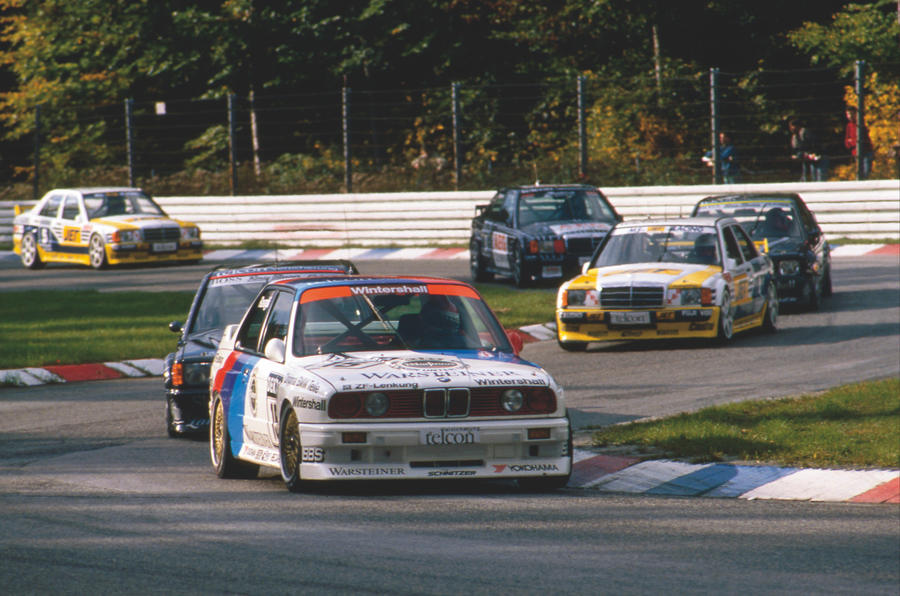 A successful start for the BMW M3

Developed with considerable input from BMW’s in-house BMW Motorsport GmbH competition department, the BMW M3 was always a car designed for the keenest drivers, boosted by an incredible racing pedigree that has only got richer over the years.

Remarkably, the BMW M3 won the World, European, German and Italian touring car titles – plus the Silverstone Tourist Trophy and the Spa 24 Hours endurance events – in its first year of racing in 1987.

With BMW’s offensive led by Roberto Ravaglia, Johnny Cecotto and Emanuele Pirro, the battles out on-track for the next few years were intense – the nimble M3s pitched against flame-spitting Ford Sierra Cosworths as they fought it out from Monza and the Nürburgring in Europe, all the way to Australia’s motor racing mecca at Bathurst and the streets of Macau.

The BMW M3 also briefly competed in the World Rally Championship in 1987 – Bernard Beguin revelling in the astonishing grip and exquisite handling that the M3 delivered on sealed asphalt roads to win the Tour de Corse.

For British fans, the BMW M3 is best known as the car that won the British Touring Car Championship at the hands of Frank Sytner in 1988, with Will Hoy spearheading BMW’s charge to secure both the drivers’ and manufacturers’ titles in 1991. 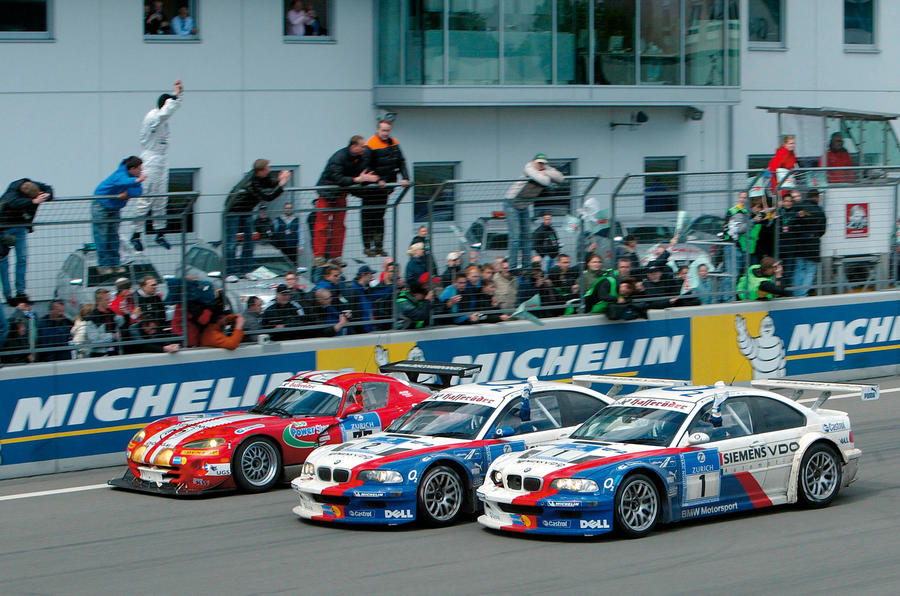 Race experience, engineered for the road

BMW M3 road car owners reaped the benefits from 1989 when the Evo model was introduced. It offered an extra 20bhp, as well as a larger front splitter and deeper rear spoiler plus lighter panels, thus delivering greater performance. This was followed by the even more developed M3 Sport Evolution, with the racing version pushing out 374bhp – 78bhp more than the BMW M3s originally raced in 1987. The wins kept coming, and the BMW M3 picked up a wealth of additional touring car titles before it morphed into something even more overtly and aggressively sporty.

As the original E30 BMW M3 was superseded by the E36 body shape in 1992, BMW developed the M3 GTR – boasting wider hips and a more obvious rear wing. Just like its predecessor, it was an instant success, with Johnny Cecotto winning Germany’s ADAC GT Cup in 1993.

The BMW M3 tasted success in the USA, too. A tranche of BMW M3s run by Prototype Technology Group raced to three back-to-back titles in the GT class of America’s top sportscar series from 1996 to 1998, with Bill Auberlen adding the drivers’ title in 1997.

Following the introduction of the BMW M3 E46 in 2010, the even-more muscular M3 GTR – powered by a 4.0-litre V8, rather than the first M3’s 2.5-litre in-line four – was raced by Jorg Muller to the American Le Mans Series’ GT title, as renowned BMW team Schnitzer crossed the Atlantic to take on the Americans. 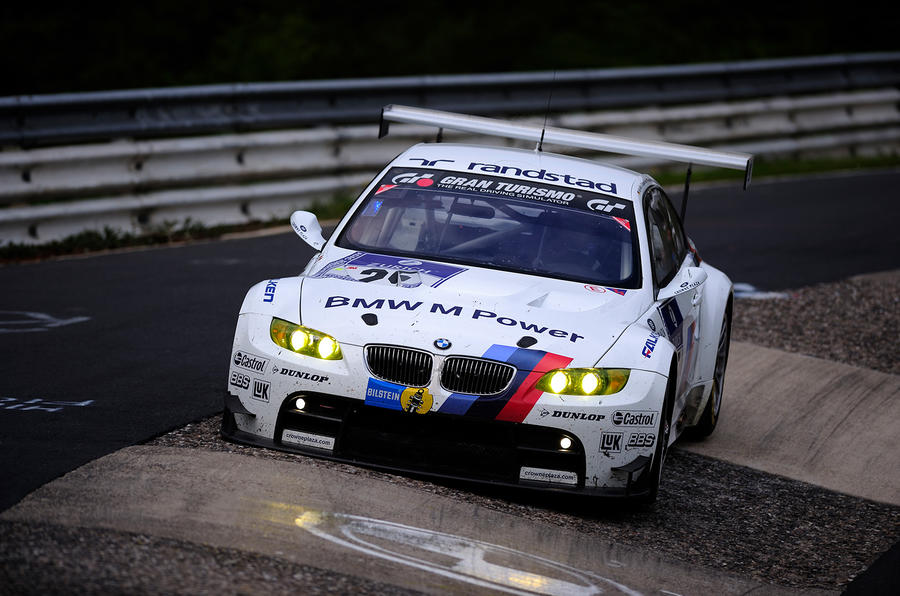 Going the distance at the Nordschleife and Le Mans

Despite the BMW M3’s global success, one circuit stands out as its natural home – the Nordschleife. This 14-mile lap, which twists its way torturously through the Eifel forest, is one of the most challenging circuit in the world,

At the same time, BMW set the BMW M3’s sights on another endurance classic – the Le Mans 24 Hours. Following an outright win for the BMW V12 LMR sports-prototype in 1999, BMW ended its 11-year break from sportscar racing’s most famous event in 2010.

This time, BMW brought two M3 GTRs to race in the GT2 class at the famed 8.5-mile high-speed track. One of them continued the hugely popular tradition of BMW racing ‘Art Cars’ – bedecked with a multi-coloured livery by American artist Jeff Koons, that followed in the wheel tracks of high-speed artworks from Andy Warhol, Roy Lichtenstein and others that dated back to Herve Poulain’s BMW CSL in 1975. 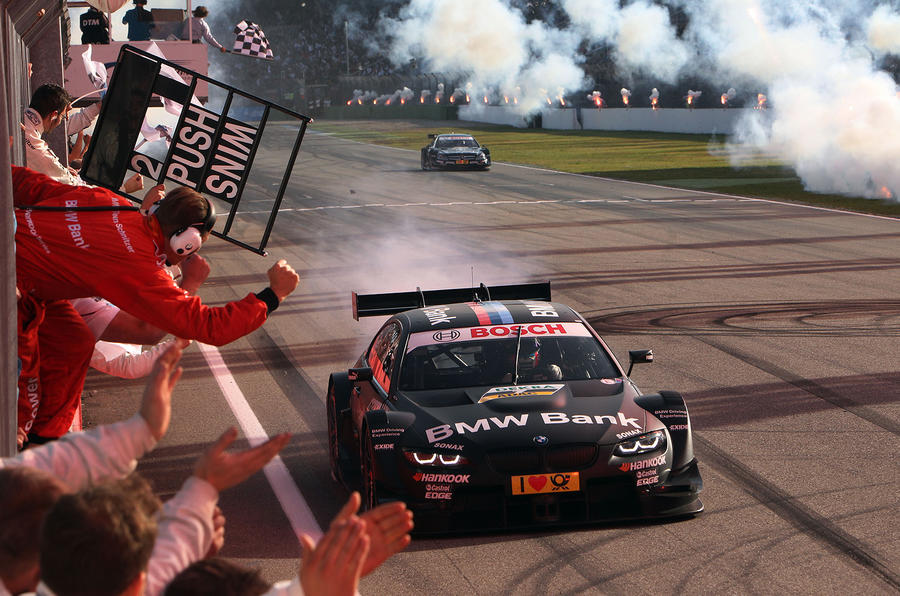 Success on home soil in the DTM

After a 20-year break, BMW returned to the German-based Deutsche Tourenwagen Meisterschaft in 2012, promptly landing both the drivers’ and manufacturers’ titles with Bruno Spengler leading the brand’s three-team charge against long-standing rivals Audi and Mercedes-Benz.

The DTM also introduced a new model carrying BMW’s sporting standard: the M4. The road-going 4 Series made its debut in 2014 to take the place of coupe and convertible models within the 3 Series line-up, and it was clear that it would soon follow in the footsteps of the M3 with racing titles on its CV.

With intense inter-manufacturer rivalry, success in the DTM is hard-earned. But BMW didn’t have to wait long to wet the BMW M4’s head – with Marco Wittmann being crowned champion at the end of the car’s first campaign in 2014. BMW Team RMG and Wittmann struck again two years later in 2016, bolstering the M4’s legacy. 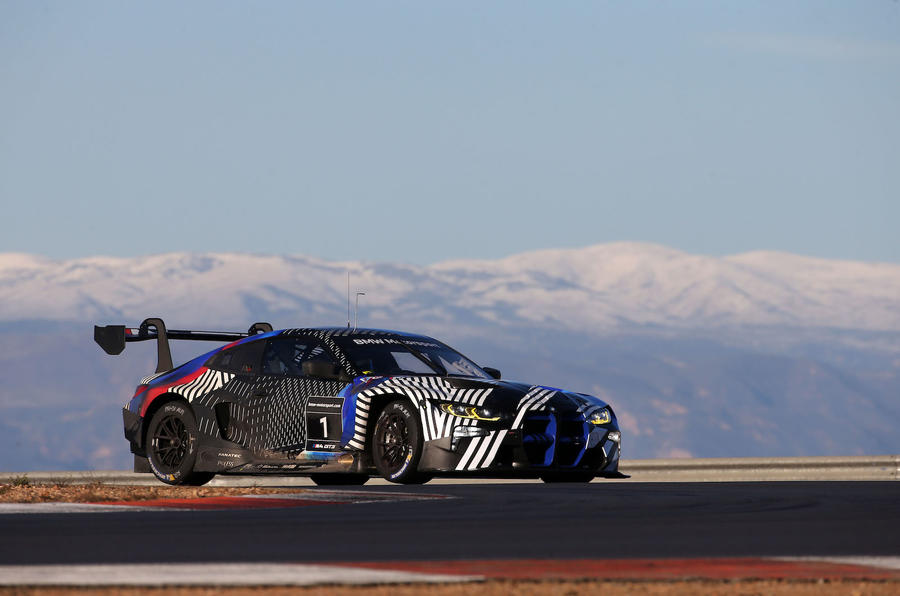 Designed with customer drivers in mind

In recent years, BMW M4 has found a new happy hunting ground as one of the cars of choice in entry-level GT4 category – its nimble nature earning it plaudits in the way the M3 did when it was introduced. Chosen by an increasing number of drivers and teams, much success has followed, with BMW M4 GT4s winning European, British, French and German titles, and filling ever-more of burgeoning grids.

Back in 2000, BMW summarised the symbiotic relationship between its road cars and its racing programmes, saying that it saw participation in motorsport as a driving force for development – and that nowhere else did it learn as much about dynamic, high-performance cars as on the race track.

This message still stands good today, with BMW’s all-new M4 GT3 endurance racer – which will hit the tracks in 2022 – being developed directly alongside the BMW M3 Competition Saloon and BMW M4 Competition Coupé.