BACK TO ALL OPINION BLOGS
Currently reading: Is Subaru the new Saab?
UP NEXT
Opinion: Why Tavares can make Stellantis succeed

Is Subaru the new Saab?

I spent much of last Thursday driving the new Subaru XV. I trekked across the Midlands from Rockingham circuit to Stratford and then back to central London.
Share
Open gallery
Close
Share story

I spent much of last Thursday driving the new Subaru XV. I trekked across the Midlands from Rockingham circuit to Stratford and then back to central London.

I have to admit, I have a soft spot for the Subaru formula. Back in 1997 I had an Impreza Turbo saloon as a long-termer, which was followed a year later by the first Forester model.

I drove both cars the length and breadth of the country and was a big fan of the permanent four-wheel drive and the long-striding chassis tuning. (The ‘97 Impreza was still quite compliant and gently-boosted road rocket: much less hardcore than later versions). I revelled in the all-wheel performance and Subaru’s insistence on being intelligently different.

It wasn’t just the flat-four engines and proper permanent four-wheel drive and other quirks like frameless doors, it was the company’s whole approach. The Forester concept was years ahead of its time and, although it took some time, the diesel boxer engine is a triumph of alternative thinking. It remains smoother and more refined than most conventional in-line oil burners, all of which have been honed over a decade and a half.

So, as I scooted swiftly down the M40 late on Thursday evening I struck me that Subaru could become the next Saab. Not in the sense that it will gently fade away and disappear, but in the sense of the old-school Saab, which was determined to do things its own, carefully-considered, way.

Of course, Saab and Subaru did have a short-lived alliance early last decade, when both brands were partly under the General Motors umbrella. Saab built its own, thoughtfully tweaked, version of the Impreza. (I went to the launch on Santa Monica and thought the Saab suspension re-design and 150lbs of extra sound-proofing made the 9-2X a better car, though less than 11,000 were sold). They also co-operated on the Tribeca SUV, Saab designing its own version with a different nose and tail. That project was abruptly canned, leaving Saab with a large concept-car space on its 2005 New York motor show stand.

But for drivers who appreciate a company that is engineering-led and more than a little eccentric, perhaps Subaru could become home. Certainly, Subaru’s excellent safety record is unsung and the XV was an excellent example of the kind of rapid, long-striding, car that made Saab so appealing to long-distance drivers.

And, unlike any Saab that actually reached the European showroom, the XV can carry on regardless, when the Tarmac runs out. Even the resolutely unsexy interior might make you think that the money has been spent on underskin engineering. I like the way the XV stands in contrast to conventional premium ‘off-roaders’ such as the Audi Q3, thumbing its nose at aluminium brightwork and slush mouldings. It’s not cheap, but the XV feels like it has strength in depth. 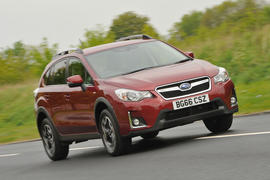