Some of India's best-selling cars have failed even the most basic crash tests, but should we be surprised?
Share
Close
Share story
by Hormazd Sorabjee
Follow @autocar

The results of some of the popular Indian cars subjected to the Global NCAP tests have confirmed what we suspected all along – that Indian cars have appalling crash safety standards.

With no government-approved crash testing facility in India (a plan to build one has been delayed for years) there can be no proper crash safety regulations. Therefore, the crashworthiness of cars in India was always unknown. Until now.

NCAP’s first independent crash tests of some the best-selling cars in India have laid bare how unsafe these home-grown models are, complete with zero-star ratings. According to Max Mosley, chairman of Global NCAP, the safety standards of these cars are 20 years behind the five star standards of Europe and North America. A damning condemnation, no doubt, but should we be surprised? Not if you’ve been to India, where the concept of road safety is non-existent.

The statistics bear this fact out. With over 160,000 road deaths every year, India has the dubious distinction of having the worst road safety record in the world. Riding four (or even five) up on a motorbike without helmets is a way of life, and everyone moves around with a karmic belief of ‘it won’t happen to me’.

It’s not just the roads, either. People die falling out of trains and crossing train tracks, too, because health and safety is usually tossed out of the window. That’s sadly the state of mind of most people in India.

For the punter, too, safety isn’t a priority. Price, fuel economy and cost of ownership take precedence over ABS, airbags and crumple zones. The good news is that car buyers of late are increasingly aware of the latest safety features, but the bad news is that they still don’t want to pay extra for them. Not even airbags, which NCAP tests show are the biggest life-saver.

The fundamental problem here is the absence of contemporary safety regulations in India to force manufacturers to raise their safety standards.

The NCAP tests also show that home-grown cars such as the Tata Nano and Suzuki-Maruti Alto bodies have weak body structures that crush badly on impact. While it’s easy to get moralistic about these zero-star cars, the reality is that safety is directly proportional to costs. Are customers willing or able to pay for anything safer? The fact that the Suzuki-Maruti Alto is India’s largest selling car by far suggests otherwise.

The Tata Nano wouldn’t have been the world’s cheapest car if it was engineered with a four-star rating. From Tata Motors’ point view the Nano is still a lot safer than a family of four on a bike, the car’s intended customer.

But, regulations or not, shouldn’t safety be the manufacturer’s responsibility too? Volkswagen certainly seems to think so. The dual-airbag-equipped Polo is the hero of the day with its four-star rating. The German manufacturer has declared that after the NCAP results the Indian Polo won’t be sold without airbags. The Polo isn’t a car that’s stripped of safety features to make it more affordable and VW’s uncompromising approach to safety must be applauded.

Hopefully, other car makers will be forced to take the same no-compromise approach to safety as more and more Indian cars are crash tested by NCAP and their results made public. NCAP could also be the turning point in the car buyers mind – from apathy to awareness of what a safe car should be. 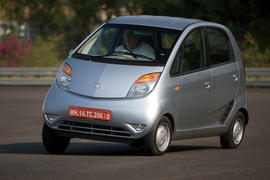 Should we be surprised?

No, we shouldn't not here in the UK.
While we in the West do have higher safety standards and institutions moving things forward we have a Prime Minister who's leadership campaign was funded by an arms dealer.
It's not very often we see multinationals putting the safety of the Nation before profits as evidenced by Cameron's bribe to the Councils in an effort to push through licensing of the oil & gas industry to carry out hydraulic fracking to 64% of the land.
You could even argue that it is the multinationals like Monsanto who are exporting failing GMO seeds, and the many others who ensure the masses in India work in sub standard factories and pay so little are responsible for the fact that safe cars are not affordable and for too many are not an option.
Furthermore I expect safety standards to fall here in the UK as this government continues to lower the standard of living through inflation and forcing the young to work for their benefits as well as sanctioning the benefits of the disabled.
Looks like a race to the bottom where the profit of the corporations come before the creation of decent jobs enabling the working class to provide for their families.
angelicagheptanB 4 February 2014

That only shows that we need

That only shows that we need to be cautious in buying new cars and in driving. Road safety is a good option.
ordinary bloke 3 February 2014

.... but they cannot reasonably be expected to sell cars that are considerably more expensive than all their competitors just because there isn't a level playing field. The Indian government should introduce proper regulations and take more care of their people, that is their primary job after all. The other side of the argument is of course, that without that high level of casualties, India would be even more over-populated .............
View all comments (5)