Before the capital is shrouded in smog, the introduction of a new hybrid black cab plans to make London's streets cleaner
Share
Close
Share story

At an event in London last week I became the first civilian to drive the new Frazer-Nash London Cab on public roads.

A range-extender hybrid, driven by electric motors and a 1.0-litre three-cylinder petrol engine, it promises to combine 99mpg and tailpipe emissions that are close to clean air.

The Frazer-Nash cab heralds the beginning of a serious shift in automotive policy: reversing the so-called ‘dash for diesel’.

London Mayor Boris Johnson teamed up with Lord Mayor of London Fiona Woolf to set out his vision for an ‘Ultra Low Emission Zone’ in centre of the capital.

The announcement was made on the 60th anniversary of the introduction of the Clean Air Act, which saw London abandon the burning of coal and wood, the main reason behind the legendary ‘pea souper’ fogs. The Act was forced into being because of a smog in December 1962, which is said to have killed 12,000 people.

But it’s becoming clear that the capital and other British towns and cities (including Birmingham, Oxford and Manchester) still have a serious air pollution problem. And it’s not something that we can smell so very easily.

A survey carried out by the Massachusetts Institute of Technology and funded by UK Engineering and Physical Sciences Research Council concluded that around 13,000 premature deaths in the UK are caused by ‘combustion emissions’ annually. Of that, around 5000 heart attacks and lung diseases are attributable to vehicle emissions.

It looks like things are taking a turn for the worse in the capital, with Oxford Street in the centre of London having some of the highest concentrations of Nitrogen Oxide in the world.

Not surprisingly, attention has turned to the UK’s diesel-powered vehicles. Diesel engines are responsible for the overwhelming amount of particulates and nitrogen oxide pollution. Very fine particles are now thought to be small enough to pass into the human blood stream via the lungs.

All the UK’s cities have a big problem, it’s just that London’s air quality is much more closely monitored.

There have been two huge policy errors that got us into a serious situation that look like it might get worse. Firstly, the completely debasing of the meaning of ‘pollution’, by classing CO2 as a gas immediately harmful to human health.

Indeed, the Union of Concerned Scientists had long campaigned against the use of diesel in the US. They also ignored the presumption against diesel as a fuel in places like Japan.

But the situation looks even worse. The World Health Authority has recently massively lowered what it regards as the ‘safe’ exposure to particulates. And there’s increasing evidence that as diesel engines age they becoming far more polluting.

Which is where the Frazer-Nash comes in. It’s the first dedicated London vehicle that is reversing the idea that having low CO2 emissions is all that matters and recognizing that all cities need to start reversing up on their reliance on diesel. 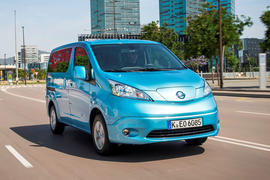 We drive Nissan's van-based five and seven-seater, which is claimed to be the world's first all-electric MPV

There are significant upsides to driving a petrol hybrid in heavy traffic, as I found when piloting the Frazer-Nash. The silence of the electric motors, the ease of the single-ratio transmission made driving around the centre of the capital as relaxing as I imagine as it could ever be. And the huge reduction in drive-by noise will make city and town living more civilized.

But this is just one tiny step. With tens of millions of diesel vehicles on the roads, this issue of pollution could – should – finally topple CO2 from the top of the environmental agenda.

It's the Petrol v Diesel thing.......AGAIN!,the advantages of Diesel are on the wain,Petrol is catching up mpg-wise,non Petrol cars are dearer to service,are only of real use IF you do over say 25K miles a year,the Fuel is dearer,the DPF is a dear item if it gets clogged by not driving it often enough, another reason for not being an option for low mileage users,besides,in 10-20yrs we might not be driving Fossil Fuel powered cars,the Mags tell us they will be powered by anything but,so,eventually the discussion of which is better will not matter.
Peter Cavellini 18 August 2014

Just a thought,now, i don't live in a City,i don't visit Cities very often,but the idea of clean vehicles, ie,virtually no bad emissions appeals to me,and i'm sure most Londoners,so, why not give a big discount on these Vehicles?,so that Taxi drivers will switch to them,and while we're at it,what about Buses?,all delivery vehicles?, i'm not sure about emergency vehicles,but, wouldn't it be nice to walk about without coughing?,bad smells?,relative quiet?,i'm sure Londoners,or any City populous for that matter,would be much happier.
fadyady 12 August 2014

Do I understand correctly that you agree with me that the taxes should go up on diesel engine cars? After all I don't see why innocent petrol car owners should subsidise your obsession with diesel cars - which is what's happening at the moment.
View all comments (15)