BACK TO ALL OPINION BLOGS
Currently reading: 2017 Volvo XC60 chassis simulator drive
UP NEXT
Opinion: Is stripped-down BMW M4 CSL worth the weight?

Volvo's new Jaguar F-Pace rival isn't due until September, but we've had a go... sort of
Open gallery
Close

The console is in a windowless basement. The screen shows a highly detailed, three-dimensional impression of the tree-lined snake that is the Nürburgring Nordschliefe. The controls include a steering wheel and pedals, but nothing else. Playstation then, in a mate’s basement? No. This is Volvo’s chassis simulator, buried down several flights of concrete stairs at its Gothenburg R&D centre.

I’m here to drive the new 2017 XC60, in T5 front-wheel drive form, around the ‘Ring. Or a part of an XC60, because although I open a door into the crossover’s brand new cockpit, I am only getting into a third of a car, the vehicle in question shorn of its structure aft of the front seats and pretty much everything beneath the bonnet and front wings. It sits on a moving rig, has functional instruments and makes internal combustion noises once started up. Which is done by a man at a control panel behind a glass sheet overlooking the XC60, the rig and a screen worthy of a small arthouse cinema.

The point of all this? Not to entertain bored Volvo engineers, obviously, but to provide a representation of a car before it’s possible to build a physical prototype. The idea is to save time by trying out a new suspension system virtually, months before you can get a prototype out on the track.

The simulator replicates transient cornering in terms of steering and handling, but although the car moves around it does not mimic the g-force generated in a corner, nor when braking and accelerating either. This slightly incomplete set of physical sensations is why there’s a sick bag – never yet used – in the door bin. 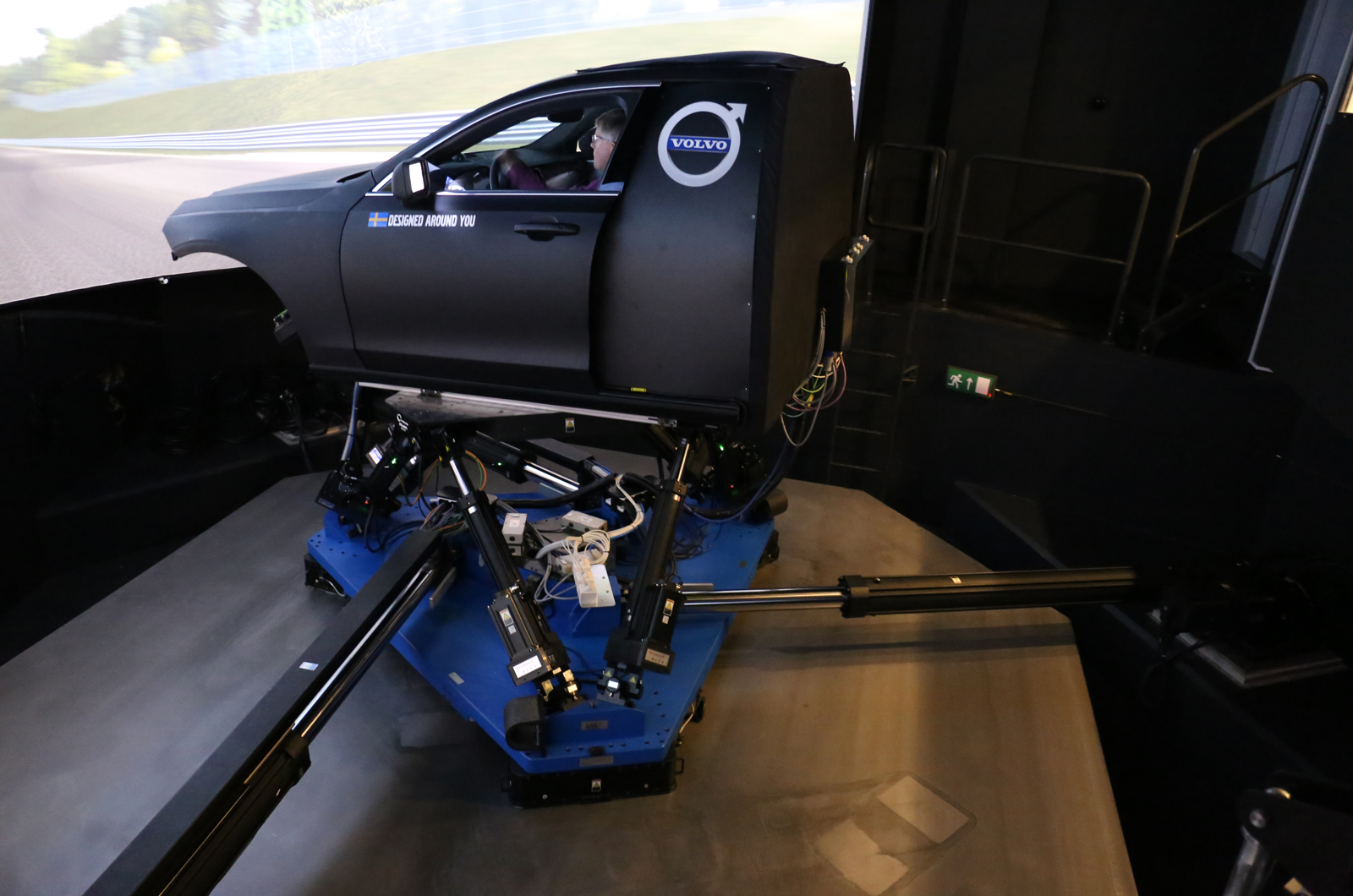 And I’m getting the chance to put it at risk. You can drive as fast as you like, I’m told, apart from over some cone-marked crests, the vastly powerful computers not yet able to cope with a car getting air, and I’m also told that it’s not about setting lap times, either for testers or Volvo. The company doesn’t publish ‘Ring lap times explains chassis chief Stefan Karlsson, but it finds the ‘Ring very useful for developing handling and steering. As does Ferrari, which originally developed the system with a company called VI-Grade, and Porsche, Volvo being the third car-maker to buy this highly sophisticated equipment. There are now around 10 car manufacturers using it, says Karlsson.

Despite the fact that sizeable chunks of the XC60 are missing, it doesn’t take long to feel totally immersed in this big-screened virtual world. What you notice first is a car that’s a lot easier to steer than a virtual Playstation racer, that it makes the right kind of noises and when you catch a kerb, jolts you in a very realistic way. You can also pick-up a sense of what the car will do in corners, an experimental lift-off producing only the mildest of tuck-ins from the nose. Which is just how the car is on the road, says Karlsson.

But on this single lap it’s hard to get a sense of how fast you’re going, difficult not to brake too much and difficult to carry speed through a bend. Acclimatisation is needed, unsurprisingly. Despite this, Karlsson says they were surprised at how useful and accurate the simulator has proven to be, its virtual suspension behavior very close to the real thing. One advantage of that is that it’s possible to perform a big, experimental change to a chassis very quickly and easily, and without the expense of doing it for real. So it’s a very valuable early development tool, if no substitute for the final iterations of tuning, which are carried out for real, some of them on roads in Yorkshire.

Next week an in-depth road

Next week an in-depth road test of the Ferrari 812 Superfast played on the Need for Speed on a playstation 4 console. Week after we will be evaluating the latest Aston Martin using Dinky diecast models on a road pattern rug.