BACK TO ALL OPINION BLOGS
Currently reading: Pause for thought at the Isle of Man TT
UP NEXT
Remembering Colin McRae, 25 years after he became Britain’s first WRC champ

Pause for thought at the Isle of Man TT

That was one of the most sombre podium presentations I’ve ever seen. Michael Dunlop took his 9th TT win in the Superstock race, with Dean Harrison and Bruce Anstey rounding out the top three. But no champagne was sprayed, and any celebration was notable by its absence.

It’s all because tragedy has struck on the island – and now, two days running. It wasn’t announced at the time, but the reason that running was cancelled yesterday afternoon, before Mark Higgins could line his Subaru WRX STI for a lap of the course, was a fatality. Veteran road racer Bob Price died as a result of a crash at Ballaugh. His was the fifth death at the event here in four years.

And right now, competition organisers are staring down the barrel of a second death in 24 hours. Something serious happened on the Mountain on the last lap of the Superstock race. The organisers have gone into total shutdown mode, just as they did yesterday. As I write these words, nobody in the press room knows who’s involved. But when this happens, I’m told, good news seldom follows. [UPDATE – the organisers later confirmed that, sadly, Karl Harris lost his life in an incident during the race].

It gets worse, by the way. As incredible and awful as this sounds, this is the second death on the Mountain today. The roads were open to traffic this morning – just as they usually are during the mornings of race week – until a crash involving two motorbikes and a car happened at Lezayre. Police have since confirmed that a local man died as a result. Could be he wasn’t a TT fan: just a man out for a ride. Doesn’t make it any less wretched. He wouldn’t have signed an indemnity warning about the dangers of motorsport, after all.

The whole TT is bathed in a mask of grief already, of course, after the death of road racer Simon Andrews at the North West 200 last month. It’s reckoned that 5000 riders took part in a lap of the Isle of Man circuit on Sunday, in tribute to the 29-year-old Andrews. Every other fan you see around the paddock is wearing an Andrews tribute T-shirt. And yet everyone has come. Everyone’s here anyway, getting on with the racing and watching they love so dearly.

In circumstances like these, you wonder how long an event like this can go on. The TT is an amazing spectacle, partly because so much risk is involved. Nobody comes here – to watch, to ride or just to support – without knowing that risk. But surely loss of life like this can’t just be chalked up to experience? It’s messing with my head a bit, if I’m honest.

Either way, there will be no chance for Mark Higgins to run his Subaru until tomorrow, when the weather report looks decidedly less favourable. Not that it seems to matter much at the moment. 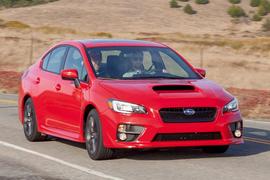 Sad news, but if it wasn't there?

Two racers have lost their lives, and that's a tragedy for their families and friends.

But, this was their passion and choice. Something inside them drove them to pursue and enjoy this form of the sport. Forget all the media and spectator coverage, these guys and girls want to do this, so let them, and try to make it as safe as possible while they do it. Clearly making a 37 mile road course completely safe with the speeds involved is impossible, it's just a case of doing what is possible. Media lockdown is normal, the families are most important and I imagine that they're protected as much as possible from the media. There's too much clamour to get immediate news now at the expense of those deeply involved - I personally turn away when the news sticks a camera into someone's grief.

The human cost is very high, but sports such as horse riding are also dangerous, and we should not legislate against free choice. I race karts, that's relatively safe, but of course there's always a risk. It's not anyone else's role to stop myself, or fellow competitors from doing what we enjoy if we are not affecting others.

The Scottish rally accident was however preventable in my opinion. There's a video showing it, and people were allowed to stand near the edge of a narrow road after a pretty fast humped bridge where the cars were landing. Without looking to blame any of the unfortunate people involved that's the kind of things that we should be looking to prevent.

What the death of 3 spectators at the Jim Clark rally in Scotland and now these deaths,there might be a case for a review of safety,more steward's,these races can't go on like this,we can't just shrug our shoulders and carry on.
LP in Brighton 3 June 2014

Sadly it was Karl Harris who was killed in this latest incident.
I know that competitors knowingly accept the risks, but it seems borderline acceptable for the organisers to run this event each year. It must be a real dilemma because the TT races are such part of the island's history, and they are the ultimate challenge for a bike racer.
Maybe it's time this event was consigned to history, like car road races such as the Mille Miglia?
kendwilcox47 4 June 2014

Over the years I have been to the TT many times,have seen many greats and all knew
the danger of the racing.It is indeed very sad that these people were killed however in my
opinion to call for the races to be stopped is wrong,so very wrong.
The danger when you race is high very high in some places the danger is so much higher
perhaps the TT is so odd these days to the normal track some are not able to go as fast as
they want to?