BACK TO ALL OPINION BLOGS
Currently reading: 109mph in the Nissan Juke-R 2.0 at Goodwood
UP NEXT
Matt Prior: Why lane-keeping assist systems need a rethink

The 600bhp concept tackles the hillclimb at the Festival of Speed, completing the run in under one minute
Share
Open gallery
Close
Share story

Although I’ve never been catapulted off the deck of an aircraft carrier, I imagine it feels something like rocketing off the Goodwood start line in a 600bhp Nissan Juke-R 2.0.

The latest bonkers incarnation of Nissan’s junior soft-roader is now tooled-up with a Nismo-spec V6 twin-turbo boasting an extra 55bhp, and which race driver Jann Mardenborough is skillfully demonstrating at the Festival of Speed.

Mardenborough is an impressively relaxed and grounded chap and he assures me that his pace will build as the weekend progresses. But considering he’s just expertly threaded the Juke-R 2.0 through two tail-wagging slides at the first and second corners, this suggest that visitors (and passengers) on Sunday are in for even more of a treat, and the time-keepers a busy afternoon.

Despite the neck-snapping start, Mardenborough hasn’t engaged full launch control on the Juke-R 2.0’s electronics-laden GT-R chassis, opting for the first stage of manual control to dampers and traction control.

"I’ve got six runs to make up the hill and orders are to not go too fast too soon. And I’m just getting re-acquainted with the car again," he smiles.

Instead, Mardenborough gets the Juke-R 2.0 rolling smartly and then enthusiastically chucks in a huge glob of power, which relentlessly eats up the short straight before Goodwood’s first corner.

This is a seriously rapid car, rated at 0-60mph in 3.2secs, which Mardenborough reckons is quicker off the line than the GP3 single-seater racer that’s his regular weekend steer.

Hard on the brakes, the Juke-R 2.0 settles on its springs and tracks faithfully and with little body roll as it sweeps through the right-hander with a mid-corner waggle of the tail.

Next to me Mardenborough demonstrates the instinctive car control of the gifted driver, a lightning quick flick of the wrists correcting the slide, then up Goodwood’s main drag into the feared Molecomb left-hander, no stranger to red flag moments.

On the bumpy approach the Juke-R 2.0 breathes on its springs rally-car style as the compliant suspension soaks up the bumps, then delivers another waggle of the tail and hurtles up towards the treat-with-respect Wall corner.

Mardenborough brakes hard for the right-left flick around the unyielding flint and the Juke-R 2.0 squirms again on its suspension. Earlier he said the car’s 150mm shorter wheelbase makes it a more agile car than its GT-R coupé donor machine, although from the passenger seat, the word I’d use is edgy.

At this sort of speed, the 1.1mile hillclimb is despatched in just under a minute — 57.21sec to be precise — with a finish speed of 109mph, putting the Nismo-R into the top 15 times today. More will definitely come. 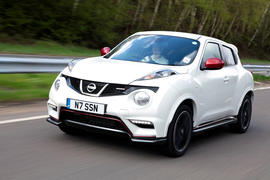 As we gather at the top of hill for the return run, the normally chatty Mardenborough is quiet. "You’re thinking about that run and where you can go faster, aren’t you?", I ask. "Yes. That’s right," comes the steely reply.