BACK TO ALL OPINION BLOGS
Currently reading: The 88mpg Kia fails to do 88mpg shocker!
UP NEXT
Opinion: Why the Gordon Murray T50 could be a daily driver

The 88mpg Kia fails to do 88mpg shocker!

So I had a go in the new Kia that can supposedly do 88mpg the other day. Having seen the ads on TV and read the initial first drive reports, I was fascinated to see if this car – called the Rio 1.1 CRDi 1 Eco – really can do what it says on the tin.
Share
Close
Share story

So I had a go in the new Kia that can supposedly do 88mpg the other day. Having seen the ads on TV and read the initial first drive reports, I was fascinated to see if this car – called the Rio 1.1 CRDi 1 Eco – really can do what it says on the tin.

When it arrived I was stunned to discover how normal it seemed in the flesh. In a street full of Golfs and Fiestas, it fitted right in. Which was nice.

Next day we drove to a restaurant on Mersea Island in Essex that had been recommended to us by some friends who like fish. It’s called The Company Shed and is fantastic – so long as you have a reason to do a 250-mile round trip and are partial to a bowl of razor clams with bacon.

I drove the Rio as I would have done any other car on the journey, cruising at a steady 80-ish on the motorway, blending in with the flow everywhere else. By the time we got home there was still three quarters of a tank left, so before re-brimming it I drove the Rio around for a few days more, treating it as the runabout that it’s so clearly designed to be, delaying the moment of truth that little bit longer.

When it came, the news was not good. I’d covered 306 miles so was expecting the ‘clunk’ on the filler gun to arrive at around 17 litres if 70mpg-plus had been achieved.

At 20 litres my heart began to sink. At 25 litres I wondered if the tank had sprung a leak, and at 28.55 litres a telltale trail of derv began finally to trickle out of the cap, indicating that the tank was once again full.

The Rio had averaged just 48.7mpg, giving a range – according to the car’s own computer – of just 454 miles. Groan.

I know what some of you may be thinking at this moment – that I drove the car like a complete lead foot just to make a cheap point. Genuinely, though, I did not. I bumbled about in it for a week basically, using it as if it were my own car.

OK, I’d didn’t sit on the motorway at 56mph, trying desperately not to use the throttle in an attempt to match the claimed 88mpg (the best I saw was 63mpg momentarily during a chug along the coast road at 35-50mph). But the truth is, it averaged less than 50mpg in my hands. Which is a shame, because the car itself is exceedingly decent otherwise. It rides, steers and handles far better than I‘d expected it to. The performance is nowhere near as tragic as you’d imagine. Even the interior is smarter than it has any right to be in a machine that costs 12 grand and boasts a seven-year warranty to go with it.

In most respects the Rio feels like a proper car, from a proper manufacturer. And if it delivered a touch more real world economy – 65 rather than 50mpg say – there would be no stopping it. World domination would ensue. But unfortunately it doesn’t, not yet, not quite. So for the time being the rewriting of history will have to remain on hold. 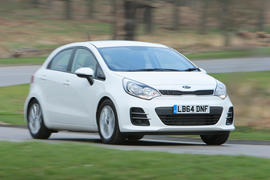 Although having said that, even as it stands the Rio D is good enough to send a shiver down the spine of anyone making small cars in Europe right now. And you can bet your last shekel that, next time, it will be even better still.