BACK TO ALL OPINION BLOGS
Currently reading: Touring Superleggera roadster shows how Mini can embrace change
UP NEXT
Could used be better than new for KTM’s freak four-wheeler?

Adapt or die. It’s an cliché, but no less true for that, and it applies to car brands just as much as it does animals, humans or plants.

And BMW has decided that the moment has come for Mini to adapt. The first physical signs of this metamorphosis appeared last week in Italy at the Villa D’Este Concours D’Elegance, with the unveiling of the Mini Touring Superleggera, an Italian coachbuilt roadster that sits on an electric-powered, carbonfibre platform that almost certainly owes plenty to BMW’s i car programme.

Though it wears the familiar grille, stares at you through a Mini’s round headlights and flaunts a pair of jaunty spotlamps, it’s clear that this is a different kind of Mini. The slightly barrel-chested body section has gone, to be replaced by subtly concave flanks crested by a strong horizontal crease.

The Superleggera’s tail tapers in a way that no Mini’s has before - not least because the Mini has never really had a tail, unless it’s a coupé, roadster or an ancient Wolseley Hornet - and it’s abruptly cut rear end, complete with Union Flag taillights, is a novelty too.

Now this is a Mini that’s the work of Carrozzeria Touring Superleggera and their design chief Louis de Fabribeckers, but the car was built in league with Mini in Munich, which orchestrated its creation and must be totally aware of the message that it sends. Mini design boss Anders Warming was keen to create "a very modern, beautiful-looking roadster of simple form language" and free of the unnecessary fussiness that scars so many moderns.

The result is a 21st century take on your classical roadster, and something fresh for Mini. Although it is, in fact, more Mini-like than it first appears. Its wheels are pushed towards the corners. It has a chrome waist-rail, just like every Mini post-2001, and the Wolseley Hornet and Riley Elf besides. And its fabulous, hand-beaten, brushed aluminium dashboard houses an instrument display deliberately referencing the three-dial instrument pack of the earliest Mini Super De Luxe.

It’s too wide, as BMW design boss Adrian van Hooydonk admits, and therefore not very Mini-like in its scale, and rear-wheel drive too, which is decidedly un-Mini-like. But van Hooydonk says that what he’d like to see is a hybrid drivetrain, propelling all four wheels. Peter Schwarzenbauer, BMW’s board member for Mini, talks of a production version of this car costing around £30,000, although the company is some way from confirming the programme. It’s likely to experiment with many more sculptural flavours before committing to extensions of the Mini’s design palette.

Now, if you’re alarmed by the thought of an evolving Mini, consider the strained styling of the Countryman, the Coupe and the awkward look of the latest hatchback’s nose. More than that, there’s the question of whether we’ll get bored with a fourth iteration of the car introduced in 2001 when today’s hatchback is replaced. A bit of adaptation is needed. 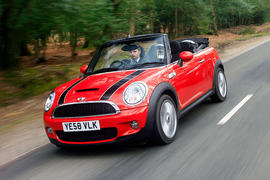 Waste of time space and money.

28 May 2014
Richard I am very sorry but to me this is a joke,a touring car that is an EV,how many
miles can it do,70-80 my word that's one hell of a tour you can have.Carbon Fibre why?,
the cost is high and there is no need.Have they not heard of Gordon's I,Stream,very light
strong and cheap,whats not to like?.
It seems to me that SOME ONE AT BMW should live in the real word and quick.

28 May 2014
As a concept car to demonstrate BMW's technology and future ideas, this Superleggera roadster is just fine. Of course any production version would probably have a steel shell, maybe front-wheel-drive and a windscreen frame strong enough to support an inverted car, but why not explore the limits of what you can achieve and create a bit of attention in so doing.
Personally I think the time is right for Mini to evolve the brand and move forwards - and this looks a pretty encouraging effort to me. I hope that public reaction is strong enough to prompt a production model soon.

28 May 2014
I just can't be doing with the caricature interior and exterior styling that tries so hard to be Fun. [Though i don't understand the vitriol targeted in the Countryman's direction - it's a Mini for owners who now have families - just get over it]. It's brilliantly marketed and, apparently, wonderful to drive but it's not for me.

This however, apart from some slight reservations re. the front end, is a pretty wonderful thing.

Hallelujah for the Italian styling houses and a big boo-hoo that most of them have now lost their independence.

They already did a Mini SUV,

29 May 2014
They already did a Mini SUV, after that nothing else surprises me, so this really isn't a stretch by any means. The nose is pretty nice and they would do well to adopt it to the production hatchbacks. The rest..not so successful. Although I like the idea of the Union Jack inspired Tail lights, the rest of the car seems oddly "kit car" looking and not the premium bespoke look they were no doubt trying to go for.

29 May 2014
I think that Mini (or MINI if you'd prefer) should look at smaller cars as well as the larger vehicles they have been producing. This, I believe, is a better-executed version of the late Roadster. It looks a bit like a Suzuki Cappuccino mixed with the 2002 Ford Thunderbird but it is at least something different instead of the Mini-as-Mister-Potatohead configurations we have seen. As the package efficiency credo of Issigonis went out with the 2001 Mini (at least as far as useable passenger space) then this is fine. BMW could even plunder the Elf and Hornet names for these exercises. Toughen the looks a bit and this could be a Hornet. A proper city car could be an Elf.

The life of Riley.

30 May 2014
BMW still own the Riley name. Maybe one day we will see another Riley Elf or Riley Kestrel.

31 May 2014
It's a good design - but I'd like to see a version that is even more "free of the unnecessary fussiness that scars so many moderns", with a less exaggerated crease down the side (there's too many of those on current BMWs). Although it doesn't have protruding headlights, the front has a bit of the frog-eyed Austin Healey Sprite about it and "it’s abruptly cut rear end" reminds me of many of the lovely Triumphs of the 60s and 70s, including the Stag and last Spitfire.

30 June 2014
This is a much more pleasing 'evolution' of the Mini brand than the odd Coupe version out now.
If not a spiritual successor, then a distant cousin inheriting the title of lightweight British sportscar from the MGB. Make a long-tail hardtop from it and you have a MINI F-Type. Where do I sign?