BACK TO ALL OPINION BLOGS
Currently reading: Why does a Nissan Leaf anger people more than an Audi SQ7?
UP NEXT
Racing lines: F1 season headed for dramatic climax

Why does a Nissan Leaf anger people more than an Audi SQ7?

Life with both a Nissan Leaf and an Audi SQ7 has shown that, oddly, it's the mild-mannered EV that gets the more extreme reactions from other road users
Open gallery
Close
Share story

We all know that different cars provoke different reactions from other road users. I suspect it’s an inevitable, if ugly, aspect of human nature that we often make judgements on sight, despite our intention not to. I had reason to dwell on this recently, having spent four cheerful months in our Nissan Leaf long-termer before swapping for our rather more brazen Audi SQ7.

Perhaps surprisingly, it was people’s response to the Nissan Leaf that irked me most. A remarkable number of other drivers seemed consumed with a need to go faster than that slightly dumpy-looking electric car ahead of them, even when said dumpy car was actually going fairly briskly and was entirely justified in being where it was on the road. More than once I had other drivers dive in for a slightly teeth-sucking overtake on a B-road while I was tooling along at a healthy lick, and on the motorway the tailgating was often remarkably aggressive, even though I’m a stickler for staying left unless otherwise necessary.

In the end I came to the conclusion that the Leaf incited this kind of response because people recognise it as an electric car, rather than simply because of its everyday hatchback status. If you want to avoid being judged by other drivers, an everyday hatchback is ideal. Something like a silver Ford Focus diesel with a few months' road filth in place is right up there. It could be driven like a maniac, it could be travelling painfully slowly, or it could just be rolling along moderately with a fine driver at the wheel. It’s the vehicular equivalent of an excellent poker face.

Anyway, am I imagining this attitude to electric hatches? Or is it the Leaf’s blobby looks that cause such a noticeable response in other drivers? 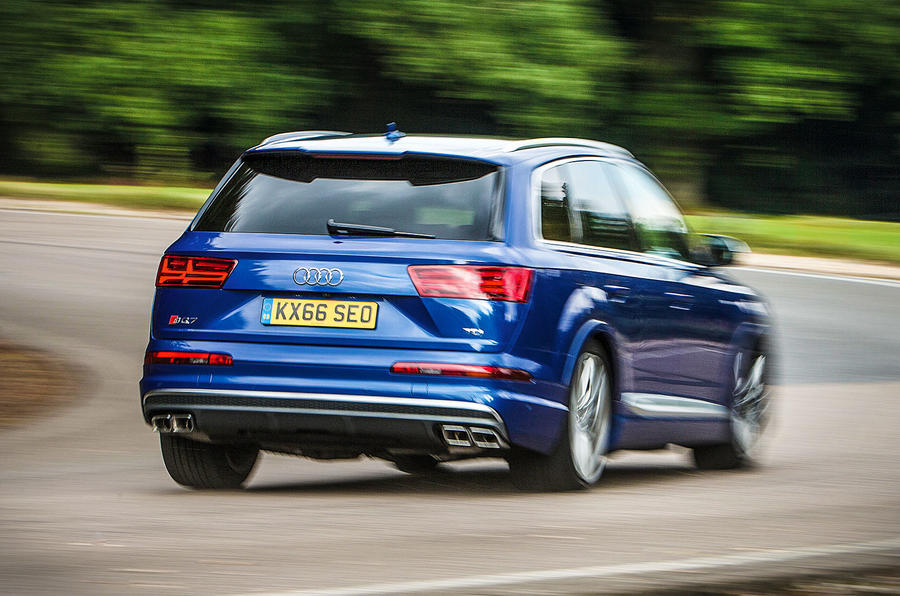 And moving on, there's Big Blue - the Audi SQ7. What I’ve noticed while driving it is that people no longer judge big SUVs quite as much as they used to. Sure, if you get stuck in the wrong lane and have to hope for another driver’s understanding to allow you to move over, you will experience less goodwill in the Audi than you would in the aforementioned poker-faced Focus or something that other drivers actually like. In my experience, the latter category includes all extrovert British cottage industry cars. When I ran a Ginetta G40 R for a year, other road users would go out of their way to let me out of junctions, give a thumbs up and generally wish me well. Drive a Morgan 3 Wheeler and you’d have to be wielding a knife before other road users started to think you might not be a likeable, fun kind of person.

The only other response the SQ7 elicits is the odd competitive streak from other enthusiasts in fast stuff, who sometimes fancy a pop at a red light drag race. I really don’t mind that, and those interactions are generally pretty good-natured. But otherwise – certainly on the M3 corridor and around my familiar stamping grounds of Surrey, Dorset and west London - nobody really reacts very much to the Audi. Big SUVs are officially the norm now. I guess it’s hard to hate SUVs when your best mate and your mum probably drive them and your other half really wants one.

So there you go. Who’d have thought that a heartily inoffensive EV would incite more unnecessary anger and impatience than a V8-powered SUV? Not me, but that was certainly my experience. If there is some unflattering stigma about electric cars affecting how people drive in their vicinity, here’s hoping that common sense will prevail as they become more commonplace - and that it doesn’t take as long as it did with the SUV.

When you see a Leaf, you know

When you see a Leaf, you know it will be driven slowly. The same for all small engined pieces of junk on the road. In this case, one tries to get past them as soon as possible, ans certainly wouldn't let them pull out in front. On the other hand, you don't buy an SQ7 to hang around. The Audi driver gets the benefit of the doubt. Of course, if driven slowly, hesitating and junctions or lane hogging, they will also need to be overtaken.
Paul72 23 January 2017

As someone who drives a Leaf regularly I can well appreciate this- routinely people do stupid things. I have come to the opinion people think it's slow. The facts of the speed I'm actually doing or road conditions don't enter into it.
What I do find is people I'm next to at the lights, after they've overtaken me, and I make a point of taking them by surprise. The leaf isn't that quick, but you can get the maximum acceleration every time without fail. It wins all the time against cars which actually are much faster.
Moparman 17 January 2017

In general there is an air of "holier than thou" with a full EV and owners thereof. They tend to be driven by someone who not only lives a green lifestyle but shoves it down the throats of all within earshot (or eyeshot on the Internet). They usually are not driven particularly well either as it is a badge of honour for these folks not to be so experienced with cars that they can drive decently. So they can really get up the nose of Mr. Average. Tesla drivers are a bit better about dealing with a car but they are also driving a not-so-subtle billboard that proclaims that they are REALLY green and have a LOT of money to spend on a car that costs as much as the average house.
View all comments (23)