BACK TO ALL OPINION BLOGS
Currently reading: Which car provides the most power per pound? It might be a surprise
UP NEXT
Opinion: Why Tavares can make Stellantis succeed

Which car provides the most power per pound? It might be a surprise

So, which cars on sale today provide the most power per pound? You might think that it’ll be a budget performance car, or perhaps a pricier machine with a preposterous amount of power.

But another way to get the most horsepower for your pound, admittedly in smaller quantities, is simply to buy the cheapest version of the cheapest car you can find.

Which is how the Proton Satria Neo GSX powers an unlikely path to the top of this table. It costs only £8495, but has a 1.6-litre ‘CamPro’ 16-valve engine delivering 111bhp.

And that’s a hell of a lot of horses at this end of the market, even if they’re dubiously wrapped. Each Proton horse costs £76.53, making them the market’s most affordable. The Satria might be Proton’s least disappointing model, but it’s still a two-star car in our book, its CO2 emissions almost up there with a Honda Accord 2.0 i-VTEC’s, incidentally.

Consider, then, the MG3. Its £8399 entry price and outmoded but generously endowed 1.5-litre motor wins it second spot in this chart at £80.00 per bhp, and unlike the Satria, it’s a half-decent drive.

The car you might have expected to win this had your bet been on a budget machine comes third, the Dacia Sandero’s super-low base price unable to compensate for its lowly 75bhp. The bigger Duster nets sixth spot, its combo of 104bhp and £9495 costing £81.01 per workhorse.

It’s a performance car that scores fourth spot, the standard Nissan 350Z offering a single V6 pony for £83.38 – real value, especially wrapped in a package this appealing, even if not best-in-class.

More tempting, then, could be Ford’s highly capable and entertaining Focus ST, each of whose generous 247 horses cost £89.05 to win it fifth spot. Its ninth-placed Fiesta ST sister isn’t a lot more at £95.83, both these cars maintaining Ford’s reputation for affordable performance.

Arch-rival Vauxhall does a good job too, a trawl through its ludicrously large model line-up - if they sold one of every model in a month they’d score a decent market share - turning up the Insignia VXR Super Sport, whose 321bhp cost £92.74 each, and the superb VXR8, whose gloriously excessive 577bhp can be yours for £92.74 a go.

And tenth place is occupied by the Peugeot 208 GTI, its 197bhp costing you £95.83 per cheval, just outpointing its RenaultSport rival, whose Clio breaks the £100-per-bhp threshold. In fact, relatively few cars provide a single nag for under £100.

But here’s the top 10, all of them coming in at under £100 per bhp. In an upcoming blog, we’ll see how some high-performance machines compare. 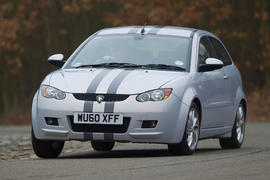 The Proton Satria Neo is certainly the best car the company has ever built, but it is still unjustifiable

From that list the focus st looks like a nice choice, it also has some lb/ft to back up the HP plus it's available as an estate. Just out of interest which car delivers the most torque per pound ? :-)
artill 6 June 2014

I think once you have worked

I think once you have worked out the BHP/£ the result should be divided by weight to see if a car is any good at the very least. Its no good having cheap horses if they have too much to lug.
LP in Brighton 6 June 2014

Not a good way to choose a car

I remember performing the same calculation a few years ago, at a time when the Honda Civic Type R offered around 200 horsepower for less than £20,000. This power / £ figure was soundly beaten by the Kia Magentis, which offered quite a powerful 2.7 litre V6 for peanuts, Honda's marketing people at the time were not pleased by this discovery!
Of course, if power per pound is that important, you'd end up on two wheels rather than four. .