What not to do if you crash a Porsche in France

A lesson for anyone who drives in France. Hopefully, it will never happen to you, but if you do crash, here are some things you should know.
Close
by Autocar
Follow @@autocar

If you’re driving a car in France, don’t have a crash. If you do, don’t do what I did.

While driving down a small French village road, I stopped to allow a Clio coming the other way round a corner. In a spectacular display of bad driving, the Clio smashed into the front corner of my Porsche 996 Carrera 4S. Due to worrying about getting my family home on our booked EuroTunnel crossing the next day, I made a number of errors.

If you have an accident in France, you are obliged to complete a form called a Constat Amiable. The purpose of this is for both parties to declare their views on the accident. Once completed and signed by both parties, it becomes a binding document for the use of the insurance companies involved.

Error number one: not being aware of the rules when driving in France. The Constat Amiable document took me by complete surprise and I did not understand the importance of it.

Error number two: the document was entirely in French and my O-Level ability was not up to translating it properly. I was not entirely sure what I was declaring when ticking the various boxes.

Error number three: the Clio driver had already filled in part of the form when he produced it, and he had ticked some boxes on “my half”.

Error number four: the accident had been a great shock and so we were more concerned about getting the family home than paying attention to the paperwork. It was foolish to assume that everyone is honest and would not make false claims. He claimed I was on the wrong side of the road – false.

In hindsight, I should have:

a) refused to complete a document that was already marked by the third party and demanded a new blank one.

b) been more careful about understanding what was written on the page.

c) not assumed that everyone would tell the truth.

d) expected the shocking rise in my insurance renewal – even though my “no claims bonus” was protected.

Having sent photos of the crash to my insurers, they informed me that their engineers considered it would be a write off. They offered a bizarrely paltry settlement with the explanation that they expected the 14 year old Porsche 911 to have around 54,000 miles on the odometer. Since mine had 118,000 miles, they had hacked away at the settlement figure and decided they could only offer £11,000 to close the claim. I had originally bought the car at £15,000, but nearly all Porsche 911s had increased in value since that point.

Since the insurers were obliged to pay “market value” to allow me to buy a replacement vehicle, their offer was way off the mark. When I contacted the Insurance Ombudsman for advice, even though no decent advice was given, the insurers automatically increased their offer to full “book” value. Intriguingly, my inaction and various calls to the insurers stating I couldn’t accept their offer, led them finally to ask what offer I would accept. Like a fool, I answered truthfully that the absolute cheapest equivalent car I could find was £17,500. They immediately agreed and, after deducting the excess allowances, they transferred the funds into my account. It occurred to me later that a less scrupulous man would have fibbed about the true value, but at least I got a sum that I felt was just about fair.

The final backlash came when my insurers scrutinised the Constat Amiable document. With the Clio driver having claimed that I was on the wrong side of the road and my signing the form – I was in trouble. Although it was a complete falsehood, there were no other witnesses and I had signed the document, so the insurers said there was nothing they could do. Even though I had disagreed with what he had written, his position took precedence. My insurers paid my loss against my own insurance, with no hope of claiming it back from the third party. Curiously, my insurers never received a claim for the damage to the Clio. This can only be a relief give the likely impact to further worsen my insurance rating. 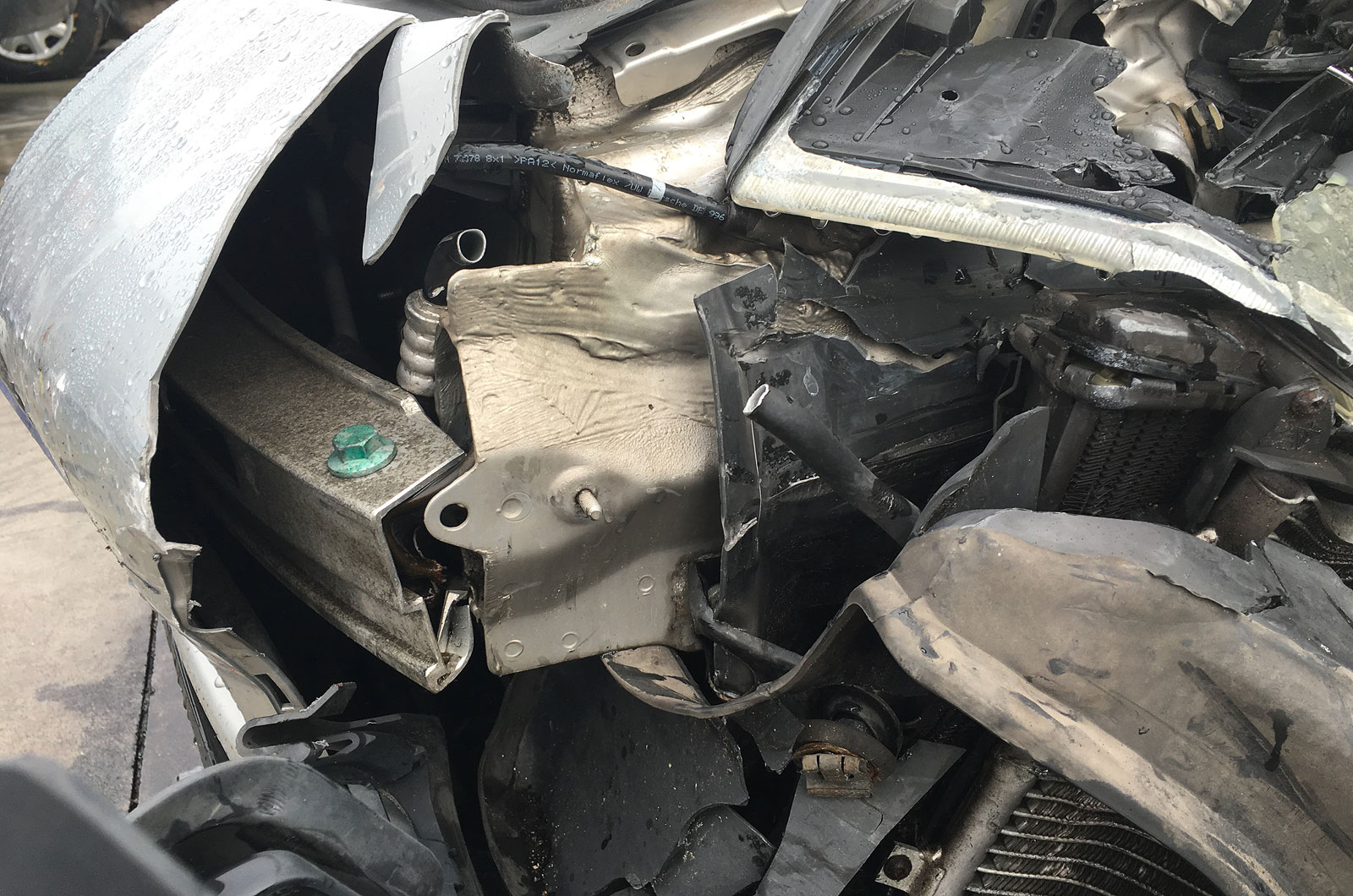 Cash in the bank

With the settlement value sitting in my bank account and us all safely at home, I should really feel that it all ended well. That is true, but the whole incident and aftermath was such a shock to us all that the memory of the event is still rather raw. Understandably, the prospect of me replacing the 911 with another, does not sit well with my darling wife. I do miss having a 911 to play with but, for now, I can console myself with trawling the classifieds looking for the next Porsche bargain of the century.

They produce English language Constat Amiable documents, always take some with you. When we were there last year a fellow English holidaymaker was hit in a car park, minor damage thankfully but the other driver tried a similar trick. Angrily shouting at the man he'd just hit and 'pre-filling' the form to which he was demanding a signature.

Understand the rules before you go and try to ignore being pressurised into signing. Having a drive of several hundred miles ahead of you can influence your thinking so always take out adequate cover. A get a dashcam.

I thought accidents in France were settled Fifty fifty...?, but as you say, in the situation you were, you got shafted!, and by the sounds of it, half filling in the constant is standard practice in La Bel France!

Being French and knowing a

Being French and knowing a bit the system, the more you tick boxes in your column of the constat amiable, the more you are responsible.

But having a Porsche in

But having a Porsche in France, you're are a bandit, aren't you ?

Sometimes for not huge

Sometimes for not huge crashes, it could be better to avod the constat amiable and give cash not to be penalised during several years...

50/50 is an exception or if you're on a private road (like parking, so be carefull).

In a general way, if you are

In a general way, if you are behind someone, you are responsible. It's quite logical.

"hitting a Porsche in a front

Another good reason for not buying any 911 post 993! (although in your case the damage looks extensive enough to maim an air cooled version too).

Bombs advice is sound.... take your own (english) forms and never never trust a Frenchman to fill in your form....or probably an englishman too but at least you can read what is said in English!

It makes me laugh when watching Porsche Cup racing....one small tap on a front corner (something likely to happen in push and shove racing) and out of the race you go. Daft

That's extremely helpful, I didn't know anything about that.

I assume from your story that the Clio driver wanted a new one, and deliberatly crashed its vehicle on a supposedly rich and non-French speaking driver, after having filled the Constat. Your insurance company didn't pay for the Clio because in France, Insurers agreed to pay for their own clients in case of an accident, whoever is responsible, to accelerate procedures.

Finally, let me guess: this was in the south east of France ???