From £37,1507
The most expensive Volvo XC60 is the quickest and the cleanest, but not the best
Open gallery
Close

Given Volvo’s brilliantly executed and duly over-hyped statement about the (yes, inevitable) electrification of its future line-up, the arrival of the new Volvo XC60 T8 in the UK seems perfectly timed. With its petrol-electric plug-in hybrid arrangement, the range-topping SUV certainly exemplifies the brand’s compass heading for the next decade.

Like the pronouncement itself, there is nothing particularly revolutionary about Volvo’s Twin Engine tech. Up front, there’s a 314bhp combustion engine driving the front wheels; at the back, there’s an 86bhp electric motor for powering the rear axle. The 2.0-litre petrol four-cylinder motor is both supercharged and turbocharged, while the motor’s charge comes from a mains-chargeable 10.4kWh battery pack.

Although new to the Volvo XC60, the combination is familiar to Volvo’s Scalable Product Architecture, having made its debut in the larger XC90. While the system’s output and functionality are much the same, the benefit of transferring to the smaller model is plain enough: the XC60 weighs about 200kg less than its sibling, meaning that gains are made in the T8’s already very brisk acceleration from 0-62mph.

Emissions and economy remain the same at 49g/km and 134.5mpg respectively. Counterintuitive, perhaps, but as Volvo is pedalling the meaningless figures returned by the current European Drive Cycle, it’s not worth fixating over. Arguably the more relevant figure is the 28 miles the manufacturer claims for the car’s all-electric range, and the three and a half hours it takes to recharge from a domestic plug. 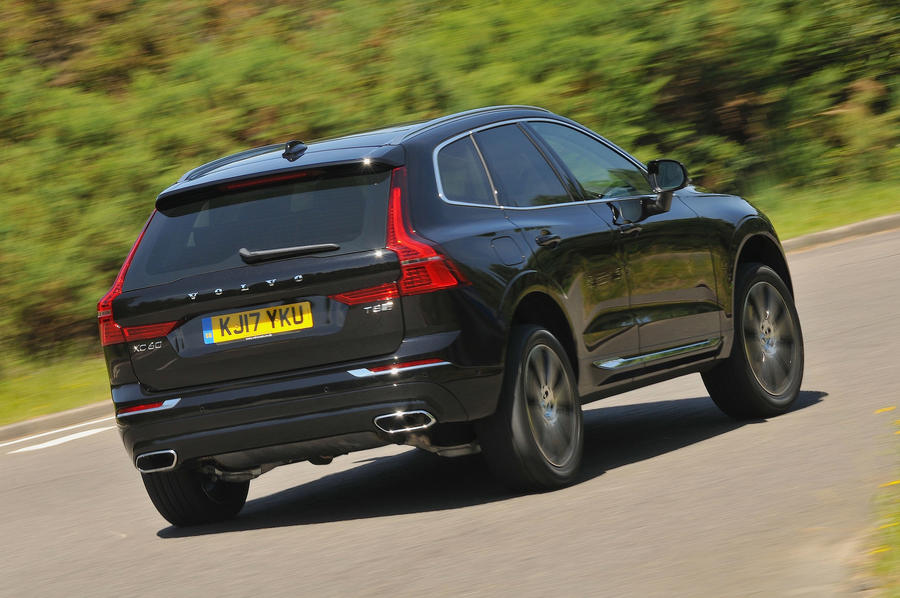 Quiet, fast and luxurious – but not without some notable inconsistencies, including a predictably narrow band of real-world usability. The car’s smarts, at least, are instantly noticeable: in top-spec Inscription Pro trim (R-Design is also available) the T8 displays fit and finish easily commensurate with a Range Rover Sport and, thanks to the practically noiseless pull-away, has the ambience to match its material indulgence.

The XC60 T8 also has the pace. You’ll need the drive mode set to Power to equal Volvo’s claimed 5.3sec 0-62mph time, but even in Hybrid - a more conventional mingling of electric motor and engine – the Volvo XC60 is in the top tier of quick SUVs despite its heft. Having said that, extracting all (or most) of the performance is not necessarily in keeping with the car’s temperament or its suggested merits.

For a start, the predominantly front-wheel-drive XC60, while steadfastly competent in the handling department, is no Jaguar F-Pace or Porsche Macan. Push on as you might aboard its rivals and its somewhat brittle wheel control and uncommunicative steering (alongside its inflated kerb weight and grabby brakes) tend to make the chassis feel like it’s under duress rather than bristling with dynamic reward.

Secondly, you’ll chow through the car’s modest battery life, and unless you’re on a very short journey, managing the charge becomes a familiar preoccupation. Like a number of rival solutions, the T8 allows you to hold onto your zero-emissions range for later use, typically in the Pure drive mode, which noiselessly spirits you about town.

The problem here is that because 86bhp is not a lot of grunt when shifting two tonnes, Volvo has not been able to banish the combustion engine completely – opting instead to keep it under a delayed, are-you-sure throttle response – meaning that when it does cut in, it does so with all the smoothness of a father-of-the-bride hitting the wedding dancefloor.

In Hybrid mode, the transition is much smoother, but there’s still a gentle lull as the engine kicks in. The fact that the Volvo XC60 is at its most consistent when the battery has all but run out – or you’re charging it from the engine – rather says it all. Of course, reach this point and the reasoning for buying a T8 starts to slide: we averaged 24.8mpg with a flattened battery; Porsche claims 24.6mpg for a Macan Turbo on an urban cycle. 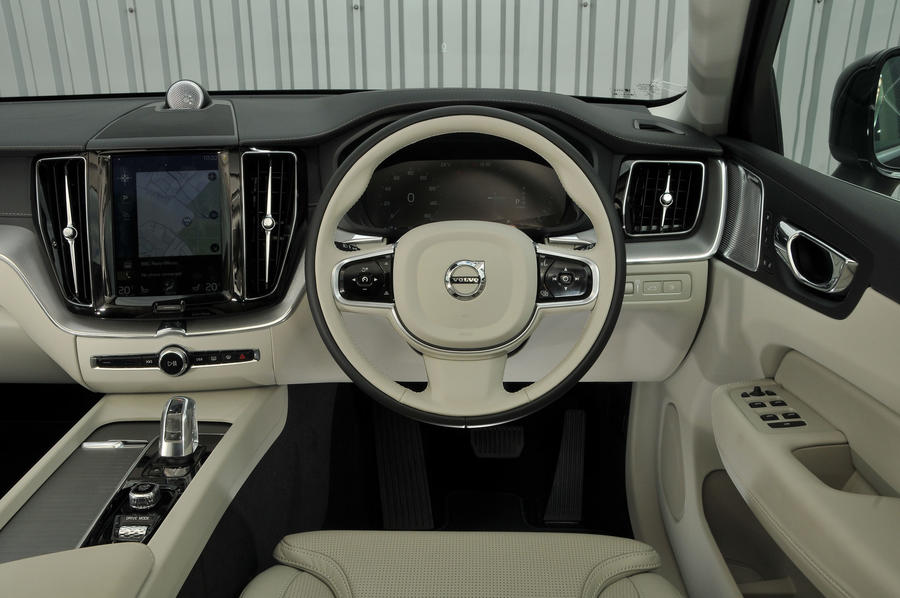 There are certainly reasons for doing so: in opulence and aura and straight-line speed, the Volvo XC60 possesses a desirability factor compatible with the T8’s asking price. Buy one with the intention of predominantly using it locally or between charge points and the car is likely to live up to the claim of reduced running costs with no obvious compromise on performance.

However, if you broaden your horizons a little or expect a lot from the T8 recreationally (as a Porsche or Jaguar buyer certainly would), the justification hits the skids. Beyond its limited electric range, the most expensive Volvo XC60 is no less thirsty than a glut of other fast SUVs – while being heavier and duller to drive. It is the kind of glaring limitation we’ve acknowledged in other comparable plug-in hybrid products, and while it persists, any grandiose statement of intent regarding electrification can be taken with a liberal pinch of salt. 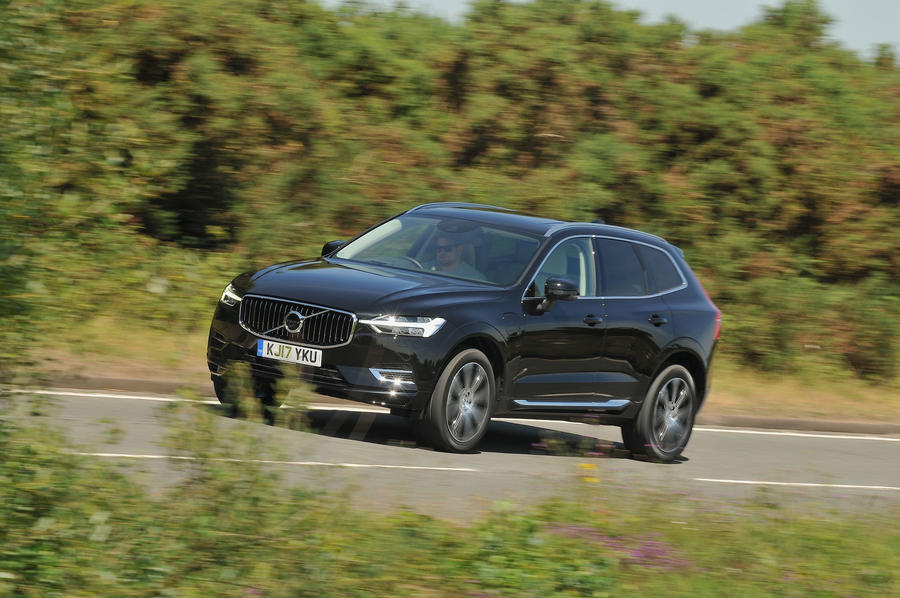 to the F-Pace, why?  There is no hybrid F-Pace.

Sorry - superstevie was the next post - with which I am going to agree! I am thoroughly sick of the uk market's obsession with going up the range means sporty not comfortable. Why is everyone doing this - including Volvo who claim to be different. When the current xc90 was launched, Volvo had an interview in the telegraph I think says they were an alternative to the Germans and by not going down a sporty / bling route and doing luxury differently (with comfort) they would stand out. So they then launched it with a ludicrous rugged styling pack with 22" wheels. And the car I test drove had horrendous tyre noise. From about 15mph. And I seem to see more r-design xc90s than anything else... harrumph- at this rate I will have to get an s class except apparently in the U.K. they are dropping the se line and only bringing in the amg lines now. Give me strength

The corporation tax reduction illustrated by superstevie is largely a timing difference - no mention that you have to pay corporation tax on the proceeds when disposing of the vehicle (there is some permanent gain depending on the co2 emissions of regular car you are comparing with as there is a limit (130g? Might have dropped from that) where you lose 10% I think of write down as non deductible). Against that, I think the purchase price is offset a bit by a grant.  Also, current monthly bik tax figures are going to be hiked over the next couple of years until they reach 16%. For pure electric vehicles that then drops to 2% (I will have an electric car then!) but I think the T8 will stay around 16%.

i considered getting an xc90 t8 when they came out but the PCP depreciation was forecast at £1k per month over 4 years /80k miles. No thanks.  So I got a used Land Rover D4 privately and a BMW i3 through my business which is costing less than that