From £13,7508
Funky, light, enjoyable and even reasonably priced, the Volkswagen Up GTI is a car to be appreciated on its own compelling terms
Open gallery
Close

Every time you read about the new Volkswagen Up GTI, you’re going to read a lot about the Volkswagen Golf GTI Mk1, because Volkswagen has pitched the Up as some kind of homage to its original (albeit perhaps not the original) hot hatch.

The Up and that first Golf have a similar level of power, for example, and not dissimilar performance figures, while all of the original’s design cues have been replicated here; just like they’ve been replicated on every pretty much every GTI from every manufacturer since 1976.

Most notably, though, the Up is meant to have the sparkle, the entertainment, the breath of fresh air that came as standard with that first hot Golf. Talking of fresh air, the Up is among the first cars to have a ‘close-coupled petrol particulate filter’, which Volkswagen says reduces particulate emissions by up to 95%.

So it’s nice to know the company hasn’t lost its sense of humour.

Anyway, during all this homage business there’s one figure they don’t reference, which is that while the Up GTI weighs 1070kg, the first Golf GTI weighed 810kg, despite this city car being not just one but two entire classes lower than the Golf small family hatch.

But that’s okay, you know. I’m not going to get all prickly about that, because it’s just the way of things. Sure, an Up is heavier, but it would also be better than a Mk1 Golf at coping with a really cold morning, or a really warm afternoon, or letting you listen to Radio 4, or being driven into a tree. It’s just how it is.

Anyway, 1070kg is still sufficiently light that you can make this a warm hatch by giving it a 999cc triple engine, making a modest 114bhp at 5000rpm, and a more immodest 147lb ft, which is generated from just 2000rpm thanks to the fact the motor’s turbocharged. Driving the front wheels through a six-speed manual gearbox, it’s enough to propel the Up GTI to 0-62mph in 8.8sec.

I rather like the mostly subtle look of it too, especially in the £13,750 3dr form you find here. That the suspension has been dropped by 15mm over a standard Up, and that it gets 17in alloy wheels with 195/40 tyres, probably does it no harm.

There are changes beyond the ride height. The electrically assisted steering rack and ventilated brakes are Polo-derived but modified, the torsion beams at the rear and MacPherson struts at the front have stiffer top mounts, with new shape lower arms on the front too. There are no adaptive dampers or such like – this is a sub-£14k car – but being a small, light car, it shouldn’t need them. Let’s see. 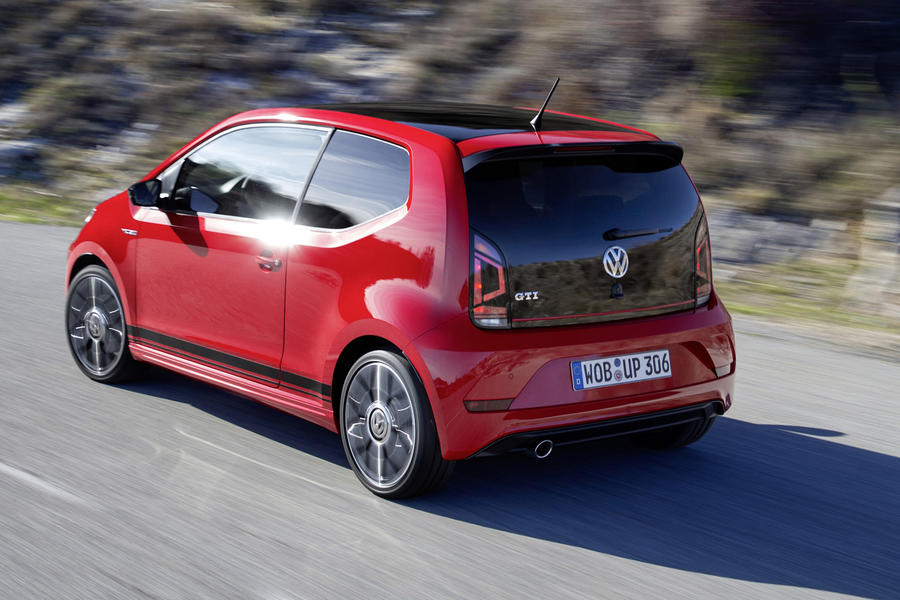 Volkswagen always gets some things right. Doors close with a thunk, interior materials and their layout are sensible and clear. The front seats are big, sweetly patterned, somewhere nearer flat than hugging, but the ergonomics are the sort of thing you don’t really notice – always a good sign – to the extent that you could comfortably replace your Golf or Passat company car with an Up and drive it without noticing most of the time, except there’s less behind you.

Our first drive, meanwhile, begins on some towny roads on the way out of an airport, during which the ride seems a curious mix of mostly absorbent but with occasional brittleness over sharper bumps: otherwise sensible suspension settings meet low profile tyres, you wonder. Those roads give way to some motorway driving, during which the stability is where it ought to be for a German car, with low wind and road noise levels too.

But it’s beyond those kinds of roads where life gets more interesting, and are where the Up GTI also feels very well suited; although, to be honest, mountain hairpins are great-looking but are rarely particularly exciting to drive. Few cars make them entertaining. A nicely judged brake pedal feel makes corner approach enjoyable in the Up, as does its light but extremely positive gearshift.

The throttle’s high for easy heel-and-toeing, though right-hand-drive cars might have better-spaced pedals. But really hairpins are all about braking, then turning but without challenging the chassis’ limit of lateral grip except at the front, waiting a lot, and then getting into a winding-off of lock versus application of throttle compromise, and visibility is usually terrible too. As a scientific endeavour it’s fine, but it takes a pretty special car to make bends like that exciting, and one usually driven by the other pair of wheels.

It’s in faster corners where chassis get to show what they’re capable of, where you can load them up and where both front and rear wheels come into play and where, when there’s enough lateral grip, the steering takes on some weight and tells you what it’s doing beyond just understeering under power while you try to get the car straight.

The Up GTI is really good on roads like these. The pliancy you feel at lower speeds doesn’t relate to a loss of body control – because there’s only a lightweight body to control, I suppose – while the relatively modest width of the tyres delivers grip to an ‘about right’ level. The performance does too: you can use what performance it has without irritating other people.

The GTI’s steering is accurate, quick and gathers useful weight, so even though it doesn’t bristle with feel, it’s rewarding, while the chassis’ inherent balance is pleasing too. Eventually, you’ll find understeer if the corner’s clear enough and you’ve gone looking for it, but mostly you’ll just have fun, driving up to sensible limits that are a similarly equal level of its and yours and the road’s, at a giggly and entertaining, rather than sweaty-palmed, pace.

The engine and ’box lend itself to this kind of driving too. There’s no dual-clutch option at this price, but you won’t be so busy or surly that you can’t be bothered to shift yourself. There’s a little lag at low revs, despite peak torque arriving at 2000rpm. I don’t doubt that it does arrive then – but down there you need to ask for it a second before it really gives it to you. A sound symposer adds to the three-cylinder’s thrummy soundtrack, which has been made more sporting than I expected, with a bit more rort on the way to the soft rev limiter. 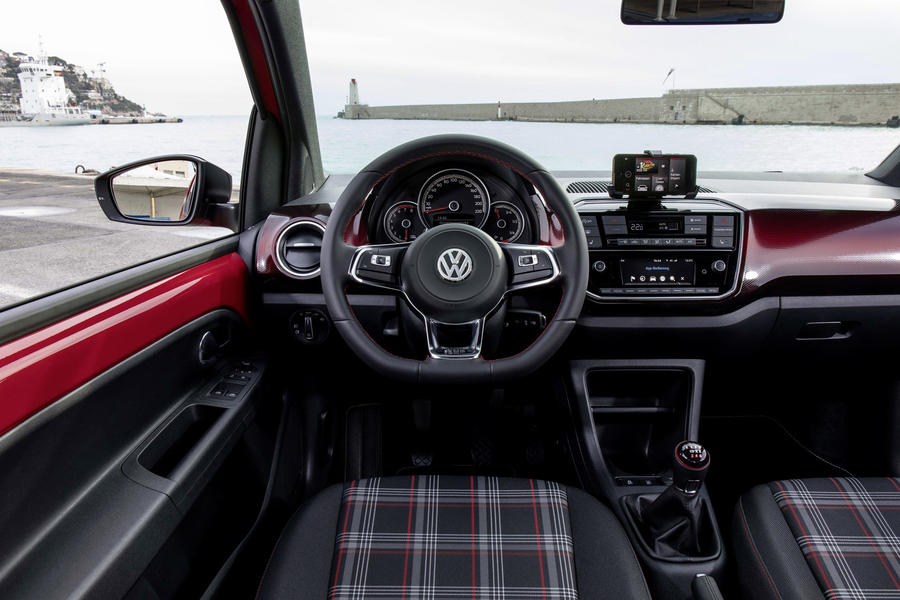 What a cool package, then. It’s fun. It’s rewarding. It’s a bit like a Suzuki Swift Sport but with more ride maturity and a less immediate engine.

Is it like the original Golf GTI? Not really; at least not dynamically. Remove the visual cues and similarities and they could be from entirely different manufacturers.

But that’s fine too. Judge the Volkswagen Up GTI against an 810kg hot hatchback and it’s always going to suffer for the comparison. But compare the Up GTI with what you can buy today, at the price you can buy it for today, and it comes across as a fizzing, willing, compelling little proposition. 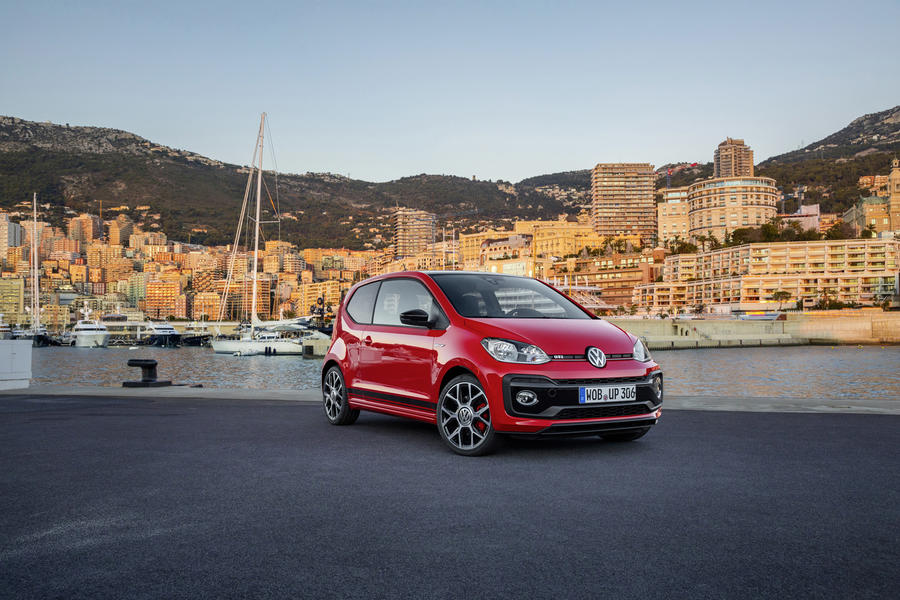 And btw, it was a 2-door + hayon in both declinations (the so-called Coupe and the longer Wagon.)

...but the defunct american flop AMS Pacer (1975-79) was killed by the gas crisis -- being small for US habits but too fat, thirsty, underpowered, awkwardly styled etc.

The Mazda RX-8 used to have the first 3 asymmetric doors (long before the Hyundai Veloster) -- a sexy coupe, but also with some serious flaws of its rotary Wankel engine (birotor 1.3 litres, very refined but not so reliable and, again, a notorious guzzler).

Back ontopic though, this affordable Up GTI spreads a boxy charm of its own and I'd be tempted by one... if I wouldn't wait for the new Swift. ;-)

Didn't the RX-8 have two doors on both sides?

Didn't the RX-8 have two doors on both sides?

Yes, RX8 had 2 rear hinged back doors. Mini clubman had a single rear door on the wrong side for the uk unlike hyundai that managed to alter the side depending on the market with its veloster.

Thank you to all of you who took the trouble to reach for the keyboard!

Some reasonable points were made (style, access for tall folks, etc.) but none were the 'killer argument', to my mind.

I suppose that it will remain a ces of horses for courses as long as manufacturers are prepared to offer 3-door cars but as they attempt to cut costs all the time, it seems that  those cars are on the way out...

Now, wasn't there an 'asymmetrical' car a number of years ago: the Pacer or some such? Did the cost of tooling kill it or simply poor sales? Anyone? Please?