9
Less fashionable than it once was, but arguably more compelling than ever to own
Open gallery
Close

Volkswagen’s hot diesel Golf has generally outsold its hot petrol sibling two to one, not that this fact will surprise you one iota.

The GTD has been omnipresent on the road since its introduction in 2009, mainly because it has always been cheaper to buy and run than the GTI but hardly any slower on the road.

In fact, it's arguable that any other car capitalised so effectively on our addiction to easy-access torque during the turbodiesel era. Throw in some understated but recognisable GTI styling cues and you have a runaway success.

In 2021, it’s unlikely the latest Golf GTD will outshine its GTI sibling quite so brazenly as it has in the past, if at all. However, this has little to do with the intrinsic ability of the Mk8 product and everything to do with the PR crisis engulfing diesel, because on paper the GTD is better than ever (if also at little more expensive).

Power has risen 16bhp to 197bhp, torque is up 15lb ft to 295lb ft, and while the new WLTP economy regime means direct comparisons with the old NEDC-assessed GTD are impossible, the new 2.0-litre Evo engine’s two SCR filters with dual AdBlue injection should make the car cleaner in terms of NOx emissions. (The official WLTP figure is 54.3mpg – some way in excess of the GTI’s 38.0mpg combined.)

Elsewhere, the you'll find the same MacPherson struts at the front and multi-link rear suspension arrangements used by the GTI, controlled by passive dampers as standard but with the option of Volkswagen's adaptive DCC dampers, which cost £945. 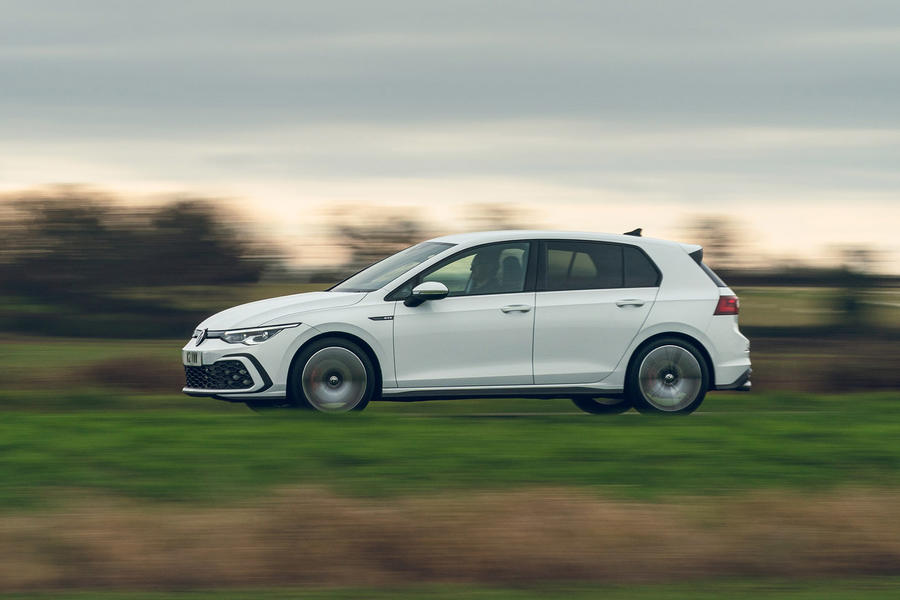 Inside, the technological array is identical to every other Golf's and its compromises already well known. We shan't dwell on them here (except the say that the way the lane-keeping aid needs to switched off each and every time you start the car is borderline debilitating; and that the changing the volume on our car's Bluetooth player caused songs to be paused; and there are still some serious latency issues to the system as a whole).

Notable elements are the same broad semi-buckets found in the GTI, albeit in monochrome hues, and the same perforated steering wheel. Overall, the driving position is solid, if uninspiring, and the transmission tunnel adorned solely with the shift-by-wire gear-selector snub, because your one gearbox option is the seven-speed DSG.

In truth, automatic suits the GTD. Although reasonably free-revving, the bottom-heavy delivery of this 2.0-litre unit makes it less exciting to engage with than any comparable petrol, the job often being best left to the slick-shifting DSG.

It really is a meaty engine, too, both in thrust and sound. In fact, you might actually want to switch the sound-actuator setting right down to Eco, because even in the default Comfort setting, the effect is almost tugboat burly, and faintly ridiculous, not to mention tiring. Sport mode ups the ante higher still and is best avoided unless you're pushing on, at which point its loud, throaty growl can actually be quite satisfying. It's all very odd.

Full-bore acceleration is strong, if on the meek side of exciting, but it's the sharp pick-up and effortless middle-gears shove that makes the GTD so satisfyingly brisk. However, I’d still prefer it were the shift points more ambitious in Sport mode, so you can avoid using the apologetic plastic paddles too often.

As for the chassis, our test car’s 18in wheels and optional DCC dampers work very nicely across a spread of British roads.

Set to precisely three notches above the regular Comfort setting, the suspension absorbs B-roads with fluency and control, although you can nudge the setting down for motorway driving, or up somewhat if you really want to grab the car by the scruff and treat it like a GTI Clubsport.

Overall, there isn't much that will unsettle the GTD, and the polished suspension set-up feeds into the car's sense of neutrality, even though it will do lift-off oversteer in extremis. The car's brake-vectoring system works better than expected in this respect, providing a stable front axle and helping give the GTD a pleasing sense of precision. 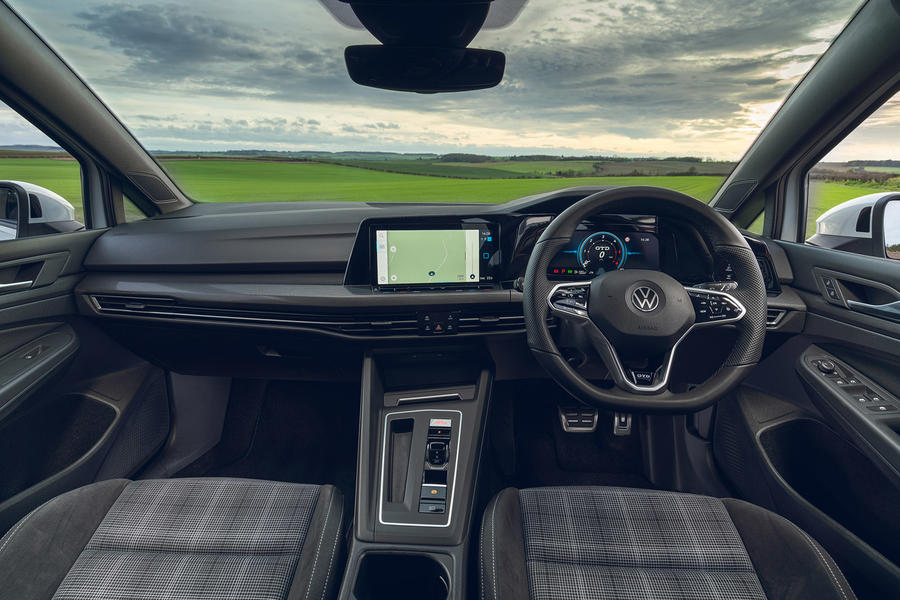 The obvious conclusion is that, for the sake of less than £700, the more powerful and arguably better future-proofed petrol model is the only sensible choice.

However, while Volkswagen has certainly raised the GTD's price to cover the cost of the new exhaust-gas treatment for the TDI engine, the car does come as standard the DSG gearbox that mostly suits it so well, which is an option on the GTI that punts its price to more than £35,000.

Along with the GTD's 60mpg capability on motorway runs, it means the more understated model still makes a decent financial case for itself when compared with its sibling.

And even if you don't think that would-be GTI owners might consider the GTD, the Volkswagen probably does enough to beat its true rivals. It's more precise than your typical hottish diesel hatch, and there's breadth here, too.

It all means that while diesel is broadly facing an end-of-days scenario, nobody seems to have told the GTD, which is more appealing than ever and now feels the understated star of the Mk8 Golf range. 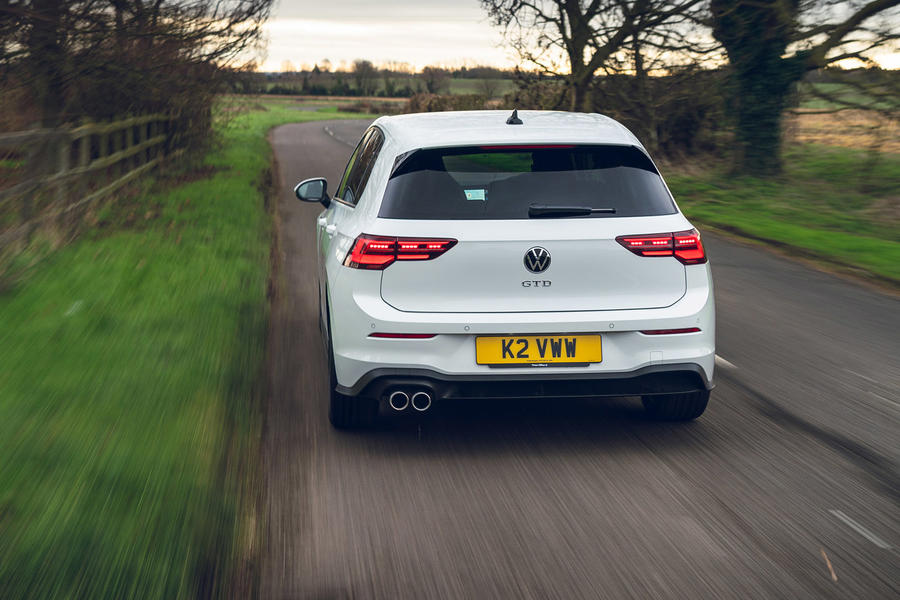 Log in or register to post comments
Cobnapint 20 February 2021
Are we applying the JLR scoring process here or what? This is quite clearly not a 4.5 star car.
Bimfan 15 February 2021

Seems to overstate the available outright performance, 0-62mph in 7.1 sec with 192bhp and 295lb/ft aren't outstanding for a 2 litre turbodiesel. The petrol GTI never mind the Focus ST/Civic Type R run absolute rings round that.

Sundym 15 February 2021
Diesels are not known for their sprinting ability but their mid range punch . I'm struggling to think of what 2l diesel is considerably faster ?
Aerial 15 February 2021

Your submission has been rejected due to our spam control rules. Please note that embedded links are not allowed in comments

When will this crap stop? I have no links!!!

Yes, it's annoying, but if you keep pressing 'save' it usually takes it eventually.