From £19,8707
A mid-life refresh aims to bring the Vauxhall Zafira Tourer up to date. It’s better, but still behind the class best
Open gallery
Close

Despite the success of its predecessors, the Vauxhall Zafira Tourer has always seemed like a bit-part player in the MPV world. With the Ford S-Max delivering a better drive, the Seat Alhambra and Volkswagen Sharan duo far more space and the BMW 2 Series Gran Tourer a premium option, It was easy to overlook the Zafira Tourer.

Although it was by no means bad to drive and had the option of a punchy 2.0-litre diesel engine, a dated infotainment system, iffy ride comfort and refinement issues counted against it.

After five years on sale, Vauxhall has finally got around to facelifting the Zafira Tourer. You get a new nose that brings the car into line with newer offerings such as the Astra, a new infotainment system and, well, that’s about it. Are these minor revisions are enough to push it towards the top of its class?

With no changes to the chassis, engines and gearboxes, you’ll find the driving experience to be much the same as before. We’d avoid the base 1.4-litre petrol engine and jump straight to one of the diesels. The 1.6-litre oil-burner has enough poke for most situations, while the 2.0-litre unit of our test car is muscular once it hits its stride.

The problem is that this engine feels rather old school; it starts with a grumble before settling into a clattery idle from cold. A bit of heat quietens things down somewhat, but you’ll always be aware of the diesel’s grittiness at all crank speeds.

We also found it to be quite lethargic from very low down in the rev range; there’s a noticeable pause between you putting your foot down and the engine giving a decent amount of shove. Similar-sized diesel engines in rivals feel much more potent, even with a couple of hundred revs less on the dial.

On smooth, flowing roads, the Zafira Tourer strikes a good balance between handling and ride comfort, coping with gentle undulations well. The springs are firmer than you might think, helping to contain body roll better than many rivals. Throw in reasonably precise steering and you’ve got an MPV that can be hustled along surprisingly quickly. 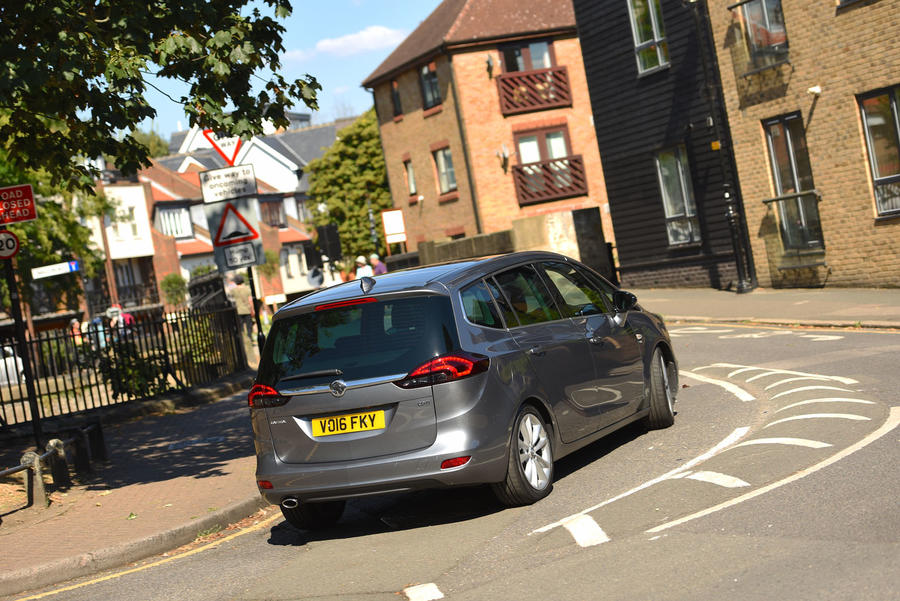 The trouble is that our roads aren’t often smooth and flowing. Get to a typically patchy bit of urban blacktop or craggy B-road and the Zafira Tourer will jostle its occupants around, especially on the larger wheels of high-spec models. While some drivers may be able to deal with this for the handling benefits, we doubt their families will be quite as keen. 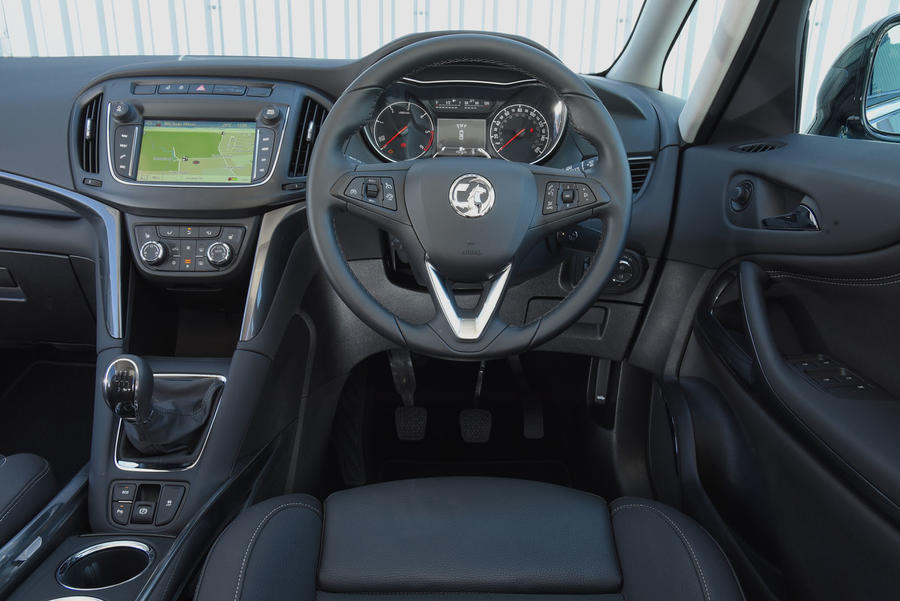 Inside, the dashboard has received a restyle to make room for the Intellilink touchscreen infotainment system that can also be found in the Astra. It’s a big improvement on the old system and it lives lower down the dash; that means it’s less of a stretch to operate. It’s a shame that some of the icons are on the small side, though; it can be tricky to select what you want on the move.

A DAB radio comes as standard, along with Apple CarPlay and Android Auto connectivity. That means that you can save a few quid by using your smartphone for sat-nav rather than spend the extra on a built in system. If you do tick the box for navigation, the system is clear enough but still lags behind VW Group touchscreens and especially BMW’s iDrive. 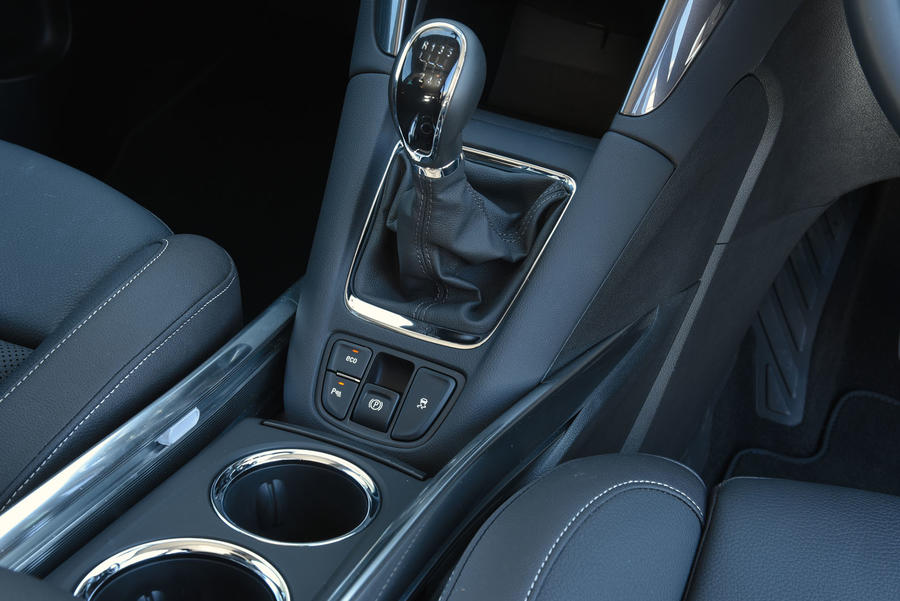 Interior quality is impressive, for the most part, with plenty of soft-touch plastics. Further exploration does reveal some questionable bits, though. The touch-sensitive area around the infotainment screen looks a bit cheap and the Flexrail centre console that SE models and up receive may be a great idea in principle but feels flimsy in practice.

The rearmost two seats aren’t as cramped as those in some MPVs but are still more suitable for children than adults. If you need more space, a Sharan or Alhambra is a much better bet. Although the middle row promises plenty of versatility if you get the lounge seating, they can be tricky to budge from one position to another.

Considering the Zafira Tourer’s infotainment system let it down last time it was on test with us, it’s good to see this has been upgraded to a much more modern system. However, we’d still like a bit more comfort and a big shot of extra refinement. That’s enough to make sure the Zafira Tourer will stay on the fringes of the MPV market for us.

Excellent value for money especially when buying used, you could buy two of these for the same price as some of the more so called prestige MPV,s.

The Mrs and kids have tried literally (perhaps to be fair - not always deliberately) to break this car. We have had kids summersaulting over seats, jumping up and down on the central armrest etc - bikes hit against it, tandem bikes stuffed in it, trees, yes small trees stuffed in, litres of liquid spilt inside of it - nothing has broke off, snapped or rattled since. Amazing. I've had to replace 2 bulbs and that's it.

I drive it 'keenly' - perhaps too much so. I can tell you it copes really well with B roads stuff - great balance between sufficient damping and taught enough body control. I'm not sure many countries in Europe have 4 seasons in 1 day weather, the varying road surfaces, angles, cambers etc etc than our Scottish roads do - so properly tested !!

It's 2.0 has loosened up quite nicely and is satisfyingly quick enough from 40-70 to get 'the bell's' in their Audi's (not BM's anymore BTW) off your backside. A good engine - not massively refined - but I find wind noise and suspension thump very well masked so the refinement package isn't at all bad. Tyre noise depends on tyre brand choice and how knackered they are - not rocket science really.

MPG is ok. Around 50 wafting along on motorways, longer B-road runs. Can manage 42 on the commute runs. 37 if driven hard and feeling brassed off.

It's massive inside when the seats are folded. I need the height an estate simply doesn't have for our tandem standing upright while using the 7 seats to get the rest of the family in (oh and luggage too).

So it's a perfect car for us. Tough, massive and good to drive. Not sure it's rivals can match it......IMO

The one I hired a year ago drove fine.
View all comments (6)