From £10,8106
As expensive as a Ford Fiesta ST and not much quicker than a Suzuki Swift Sport, the oversprung Corsa GSi falls well short of the class best
Open gallery
Close
by Dan Prosser
6 September 2018
Share

Until Vauxhall sees fit to revive its recently mothballed VXR performance brand - perhaps with hybrid or EV models, according to the rumour mill - we have GSi.

That once famous three-letter moniker was resurrected earlier this year by the larger Insignia GSi, a likeable car that we deemed worthy of 3.5 stars. Now it’s the turn of the Corsa hatchback.

The car you’re looking at isn’t really a replacement for the departed Corsa VXR because it’s down on power to the tune of 57bhp, its turbocharged 1.4-litre petrol engine only good for a relatively modest - by modern hot-hatch standards - 148bhp. 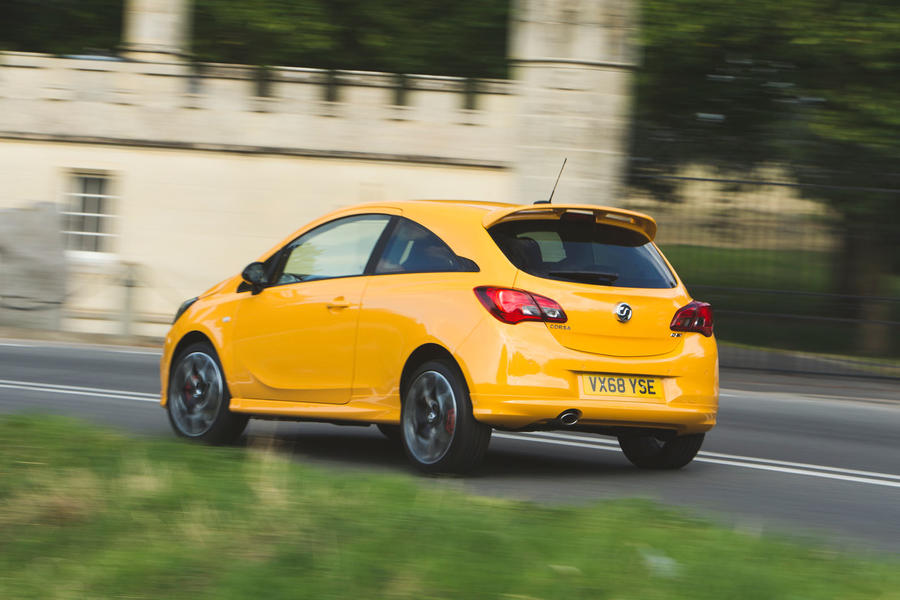 So the Corsa GSi is slower than the old VXR but, on the basis of the new model’s uncompromising chassis set-up, Vauxhall doesn’t seem to think it should be any less focused.

This thing must have the hardest ride of any small hatchback on sale today. Earlier VXR models were always jiggly and bouncy but, while this GSi is no less busy over the shape of the road, it is actually tougher and more uncomfortable than any hot Corsa before it.

Its ride quality can be quite bruising over an uneven surface, particularly at low speed. Even if the car was badged VXR, it would be excessive; that GSi designation and the less aggressive powertrain would surely be better suited to a more fluid chassis, one that was less demanding in day-to-day driving.

On a typical back road - one that isn’t too broken, at least - the firm ride isn’t too much of an issue. The car always feels hyperactive and it boings about on its springs like Tigger, but you do get an acute sense of the suspension working hard to allow each wheel and tyre to stay in contact with the Tarmac and find grip in the road surface. Its job, in other words.

That unyielding set-up also gives the Corsa GSi real agility and responsiveness and that, combined with the strong grip from the Michelin Pilot Sport 4 rubber, means there is plenty of fun to be had. The steering is a little light, but it is pin-sharp. Perhaps too sharp, actually, because until you’re tuned into its manic rate of response, the car can feel flighty and nervous.

You could argue that what matters most about this little hot hatch is that you can take it by the scruff and fling it along the road as hard as you dare, and have a lot of fun doing it. There is a little body roll, but it’s well-matched to rate at which the front axle darts into a corner and the rear follows it around, so you get a very satisfying impression of the car working up to its limits at your behest. And yet, there are other small hot hatches out there that are faster, even more fun to drive and far less demanding in normal use.

With 148bhp, the Corsa GSi is a little off the pace set by certain rivals, though it isn’t the sheer performance on offer that’s the problem but the way it is delivered. The engine is woolly and flat and it doesn’t rip around to the rev limiter the way a hot-hatch motor should. It also needs to be working at the better part of 4000rpm before it starts pulling with any conviction. The gearshift is usefully springy and quite precise, but the lever itself is unnecessarily chunky and not especially pleasant to hold.

Four years ago, Vauxhall sold a Clubsport version of the previous-shape Corsa VXR. It was tricked-up with a Drexler LSD, Brembo brakes, Bilstein dampers and Recaro seats. All that’s offered on this new GSi are the Recaro seats, and at £1055 they’re a pricey option. They are supportive and they look the part, but they’re set a couple of inches too high. Otherwise, the cabin is not at all bad with a soft-touch dashboard topper and a clear and easy-to-navigate infotainment system (the Navi 4.0 IntelliLink system fitted here is a £650 extra). 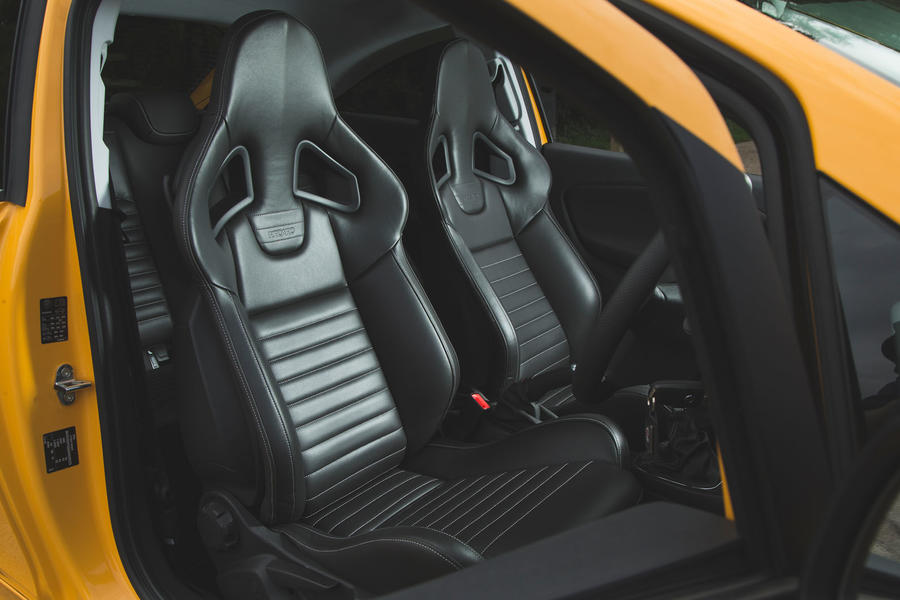 Vauxhall might rush to point out that the Corsa GSi isn’t intended to be a direct rival to a Ford Fiesta ST but, with a starting price of £18,995, it costs exactly the same as one. In every conceivable measure, the Ford is the better car, except that it is a Ford and there are still people out there who wouldn’t dream of owning one.

In terms of horsepower, the Corsa GSi is more closely aligned to the 138bhp Suzuki Swift Sport, which happens to be cheaper by £1000. If the little Swift was the only other small hot hatch on the market, the Corsa GSi would at least be the second-best car in its class. 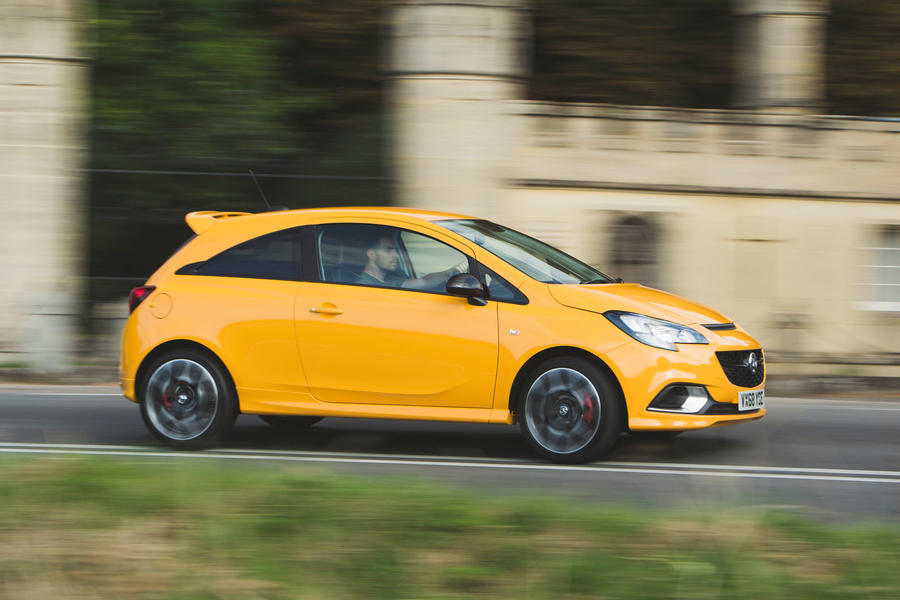 The car's color is really great , i  like it.  i like yellow ! try my free gangster games site

Agreed.  What a shame SAAB wasn't sold by GM as a going concern to a suitable (well financed) buyer.  Volvo has had a real renaissance under Chinese ownership, Geely being smart and allowing Volvo enough independence to maintain their identity and brand values.

As to this Corsa, definitely a mis-step and distraction from the PSA era cars.

Should have never been made

This run out model should not have been given a gsi badge. If PSA are going to be using gsi as the performance version of vauxhall, this is a poor introduction to what it hopes to achieve.
It's an Sri/black edition, with a few bells and whistles, which are mostly vxr leftovers. This has been pointed out many times since the reveal.

The one good thing to come of it is that it will provide a good base for many a young car enthusiast when the price inevitably plummets. And provide a plethora of sought after spares when they are crashed