From £17,9996
The Swift Sport loses weight and gains a turbocharger - but is Suzuki's rapid supermini still fun to drive?
Open gallery
Close

Pleasant surprises of an affordable nature are not a common occurrence in this industry, but the Suzuki Swift Sport of 2006 was such a thing. So too was its replacement six years later, and now we have this: a third iteration that seeks to prolong the car’s reputation as a bit of a drivers’ gem.

The basic recipe has, alas, changed a little. The old car’s sharply responsive atmospheric 1.6-litre engine is replaced with a marginally more powerful 1.4-litre that already serves in the high-riding Vitara and S-Cross. Its headline figure of 138bhp is almost incidental in this case, because forced induction has resulted in 170lb ft of torque from 2500rpm. That’s almost half as much again as the previous Swift Sport and has the potential to markedly alter the previous car’s snappy personality.

This new car is, however, lighter than the one it replaces. Built alongside the Ignis and quirky Xbee crossover at the marque’s Sagara plant in Japan, the saving amounts to 70kg – a substantial deficit brought about largely by redesigning certain suspension components, not least the torsion-beam rear axle, and a more bulbous but stiffer new body, which is significantly lighter than before.

It drops the Swift Sport into sub-tonne territory and gives it a 0-62mph time of 8.2sec, which looks favourable next to a combined fuel economy of 50.4mpg. Top speed, meanwhile, is 130mph.

In design terms this car is still recognisably Swift but rather more hulking at the kerbside. The dimensions are largely unchanged – it’s fractionally shorter and lower than a Toyota Yaris GRMN, but wider – yet the chassis sits 50mm closer to the tarmac than before, with carbon-effect bumpers and skirts exaggerating the drop. In comparison to non-Sport Swifts, it’s also 40mm wider.

In profile, it’s a little more svelte than before, and Suzuki claims new intake strakes along with engine and floor undercovers help reduce wind resistance by a tenth. You do, however, still get a pair of cannon-esque exhaust tips and 17in wheels wrapped in 195-section rubber. Overall it’s not the prettiest thing, though you’d never mistake it for anything other than the most potent model in the range.

Standard specification is good, with DAB radio and satellite navigation. There are also LED headlights and tail lights, adaptive cruise control, a reversing camera, keyless entry and a 4.2in display within the main instrument binnacle that can show boost pressure along with horsepower and torque. 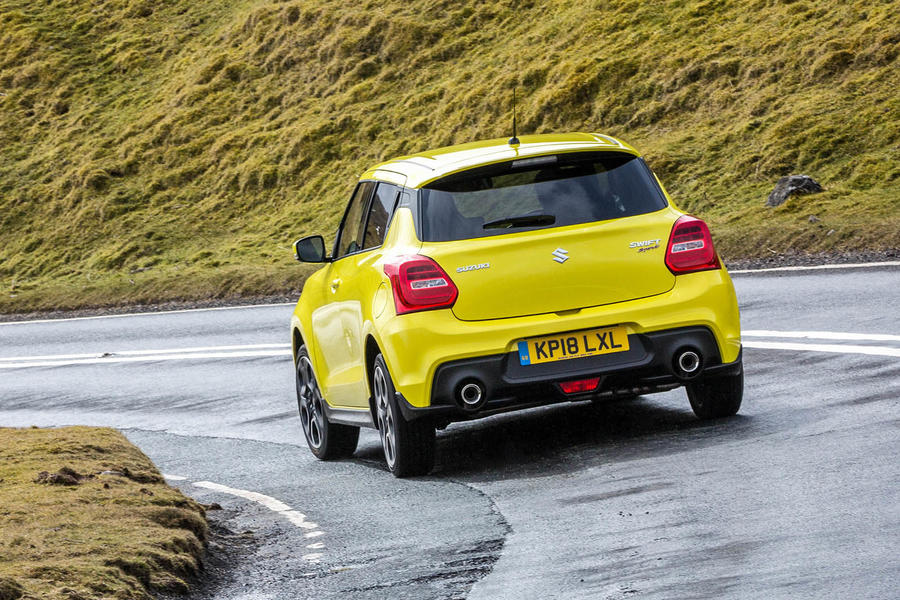 Once aboard you’re met with a driving position that’s slightly perched in a manner that seems almost unavoidable for peppy superminis. It’s good for the segment, however. The no-nonsense cloth seats are also firmly bolstered, and cup the base of your rib-cage just so. There’s also adequate adjustability in the steering column and it doesn’t take long to recognise whichever design engineer it was who positioned the pedals clearly understood life’s simple pleasures.

Despite the unremarkable character of the engine – with its curiously tinny off-throttle rattle – out on the road the Swift Sport remains an enjoyably honest thing to drive with commitment. Suzuki has redesigned the rear trailing arms to reduce roll and improve stability but this is still a car that likes to pitch into rather a deep squat given the opportunity.

It feels natural to turn in late and hard before relinquishing either plenty of brake or throttle. You’re then met with impressive front-axle grip, which allows you to carry a higher gear through most corners and let the torque, which has relatively little weight to fight against, sling you out the other side. More so than in a VW Up GTI or the Yaris GRMN, it’s the overt manner in which this car responds to weight transfer that keeps it entertaining, and it feels quite a bit quicker than the numbers suggest.

When it’s not neutered by the brake-based stability control, some vestige of which remains even when the Daimler-sourced ESP is entirely ‘turned off’, the adjustability of this chassis means it’s possible to drive within the speed limit and not get bored, which is all anybody ever wanted from a back-to-basics hot hatch in the first place. That crucial handover from damper compression to rebound also feels unusually well cushioned by the standards of the class, and so there’s control to match the compliance.

There are some caveats, however. Suzuki may have diligently hollowed the steering rack to save weight but it’s a relative weak-spot of this package. Light on feel but artificially heavy, its strong self-centring action quickly becomes wearing and it lacks the directness of what you’ll find in a Mini. Meanwhile, the shift quality of the six-speed manual gearbox is short and tactile but light and not particularly memorable. The engine also feels more of an appliance, which was never the case before.

Importantly, the Sport’s alter-ego as a shopping cart remains intact. It turns tightly and lightly at low speeds, and there’s good visibility through a windscreen that remains fairly upright. 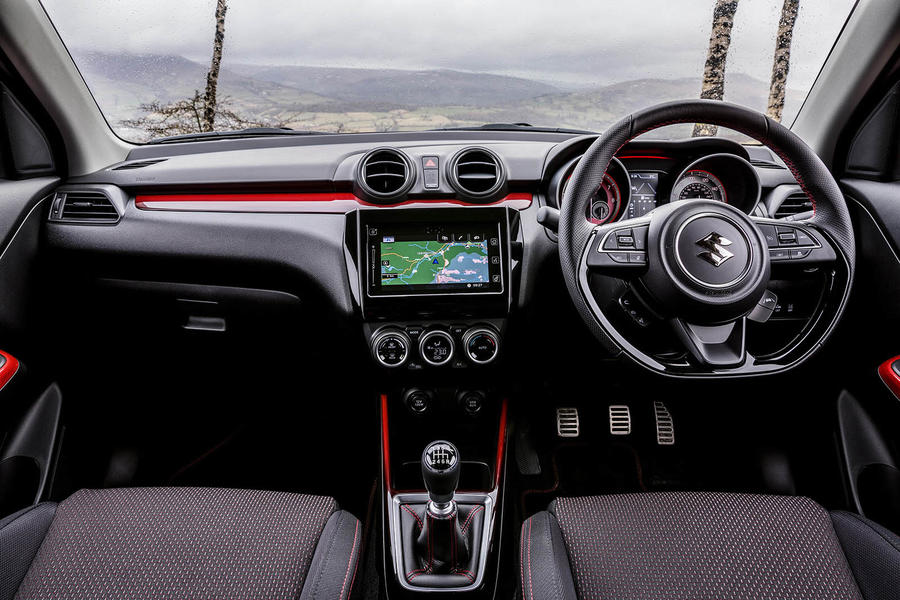 That depends on your expectations, and your budget. Suzuki has quite audaciously raised the asking price of this car compared to the previous iteration – it’s now nudging £18,000. It means you’re going to pay quite a bit extra for a more rounded and capable, but ultimately less thrilling, machine.

There are also new rivals to consider – the Swift Sport is now almost four grand more expensive than a VW Up GTI. The Japanese car offers greater practicality and has a touch more in its locker to keep keen drivers interested, but is a less desirable package.

Greater still is the threat posed by the inbound Fiesta ST, early impressions of which suggest it could turn out to be another high-water mark for the supermini segment. Given Ford intends to sneak the pricing below £20,000, it would be senseless not to wait to try that car before buying one of these. We shouldn’t forget about the Mini Cooper and Peugeot 208 GTI, either.

In the end, the Swift Sport remains a fine little drivers’ car, but it’s no longer quite the cheerful, overtly effervescent, good value proposition it was. 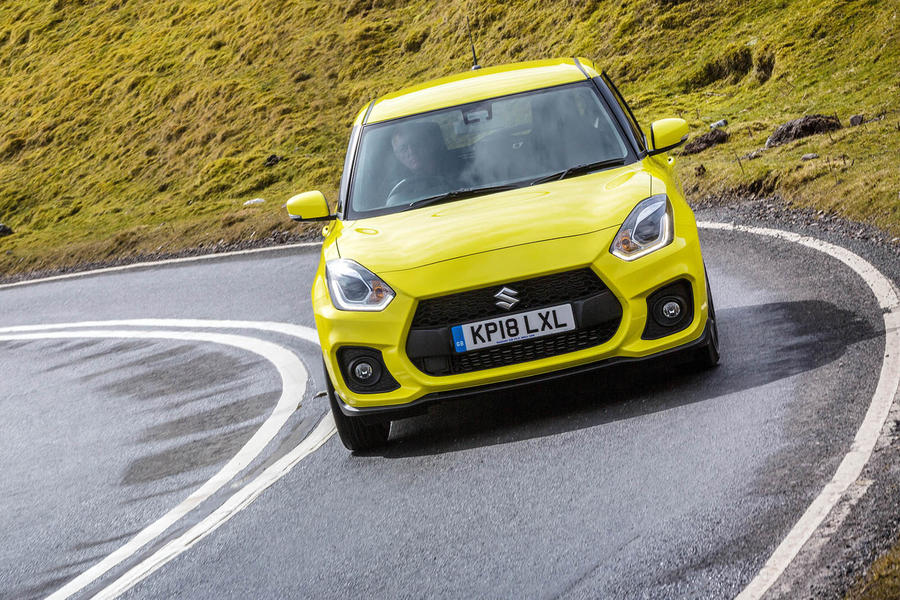 A basic Mini Cooper has similar performance figures and isn't much more expensive with some choice options. The SSS needs to be £15-16k though maybe the discounts won't take long to appear.

Yep, the VW Up GTI is not comparable...

...and not only dimensional-wise, but also power- or equipment related. Even if the Up GTI is also a bang-for-the buck offer (pardon, pound. ;-))

Suffice to see the ultra-normalos and non-supportive seats of the small GTI (a 90- to 115 hp chipped 1.0 TSI with 17 rims finally) and the seats of this Swift, really thought for sporty driving.

And, as @72Gav and @LP_In_Brighton very well noticed, this only 3-star evaluation is hard to understand - and even harder, if we take in account the previous (in Japan) First-Drive 4 stars given by the same Autocar team!

In a general sense, we are

In a general sense, we are now several years past 'peak car', after which point it has been generally a case of how much less desirable a new model is than the old.