7
A cake-and-eat-it car for those prepared to pay, with plenty of easy-going character but limited handling appeal – much like the original
Open gallery
Close

Autocar will test hundreds of cars this year but few will turn heads – or pummel eardrums – as reliably as this one.

Outwardly, it’s a 1968 Ford Mustang, in the Highland Green hue seen in the film Bullitt. At a glance, you’d mistake it for just another restoration project, albeit one that’s stunningly well realised. Ford made almost 320,000 Mustangs that year alone so there are still plenty of old duffers around and one imagines business is good for restorers on both sides of the Atlantic.

Only when you get close is the deception laid bare. The wheels look convincing from afar but at 17in are larger than period spec and the 45-profile of the Michelin tyres is modern. You’ll spot powerful six-pot Wilwood brakes: no drums here. Round the back lurk chunky outlets for the Borla exhaust, along with the car’s reversing camera and the reversing lights. And while you’re back there, squat down for the biggest giveaway of all: coil-over spring and damper units from Ridetech, jutting down from the suspension with the anachronistic impact of stalactites hanging off the ceiling of the Tate. Authentic first-generation Mustangs use leaf springs, and at this point, the game really is up.

In truth, there’s not much original about this Mustang other than the way it looks. Built in Orlando by a company called Revology, it uses a reconditioned body with an in-house, re-engineered chassis slid beneath it. The bigger news is that the powertrain is contemporary Mustang. In this case, we’re talking an aluminium 5.0-litre Coyote V8 and six-speed automatic gearbox (manual is also offered), whereas an original 1968 car carries a 6.4-litre big-block V8 and four-speed manual.

The idea is that modern brakes, double-wishbone front suspension, hydraulically assisted rack and pinion steering and a limited-slip differential make the driving experience sweeter and neater while the new gearbox and engine uplift reliability and performance but keep the car’s character. This example is also done up to resemble McQueen’s legendary whip, but anything’s possible if you have the imagination. And the cash. 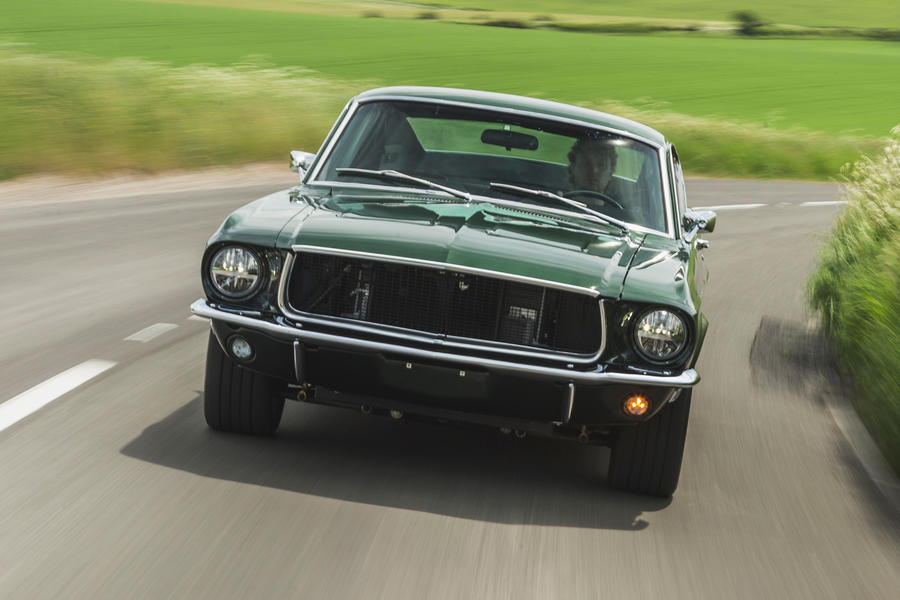 Does it hang together? Perceptions depend on expectations. Grunt-free steering, Bluetooth connectivity, excellent air conditioning, electric windows (whose switchers are disguised as winders) and the simplicity of two pedals make this an effortless thing to drive – especially when combined with forward visibility as expansive as any Nevada desert-scape.

New-found adjustability in the steering column also means you can get reasonably comfortable for long drives, although the seats are short-cut in the classic style and therefore don’t offer much outright support. Ergonomically, it’s almost there, but not quite.

The only serious change to the cabin architecture is the high and wide transmission tunnel, and Revology’s array of billet-aluminium controls, modern dials and beautiful wood steering rim blend in well with the vestiges of ’60s Mustang. The door cards and dashboard are smartly done, too, and if fit and finish is short of what you’ll get from Singer, it’s streets ahead of any period Mustang. As well you’d expect, for something that costs as much as a Bentley Continental GT V8, even before import and shipping charges.

As for drama, this car brings plenty. In the underground car park behind the central London premises of Clive Sutton – the specialist importing Revology’s wares, and also itself in the game of Mustang conversions – the engine instantly fires and settles into a recognisably modern but pulsating and deafeningly rich idle. Melded with the era-straddling ambience of the cockpit and the big bonnet stretching out ahead of you, the noise doesn’t so much raise the neck hairs as apply electrodes directly to your nape and crank up the voltage. What an event.

Out on the road, you don’t then get the same syncopated cackle as the big-block V8 of yore but neither do you get the same coarseness. The friendly Coyote is a smooth, rev-hungry unit, and while there’s something agricultural about the gearshifts, with 434bhp rather than the original 270bhp, after the right cog is found, lazy initial acceleration becomes Boxster-potent.

Working away underneath the classic bodywork, the chassis also does an unexpectedly good job of absorbing the road. This is an easy car to place and can be guided by the fingertips. Less impressive is the way the modern steering rack feels awkwardly quick at times, and the handling is generally inert. You get the Mustang’s hallmark understeer balance, which tends to persist until you lift off mid-corner then boot it. (Today, we leave those suspicions unconfirmed.)

However, traction is good, body control tight, the brakes feelsome, and the Revology car is generally happy to indulge you with a cross-country lick that would have an original badly misbehaving. 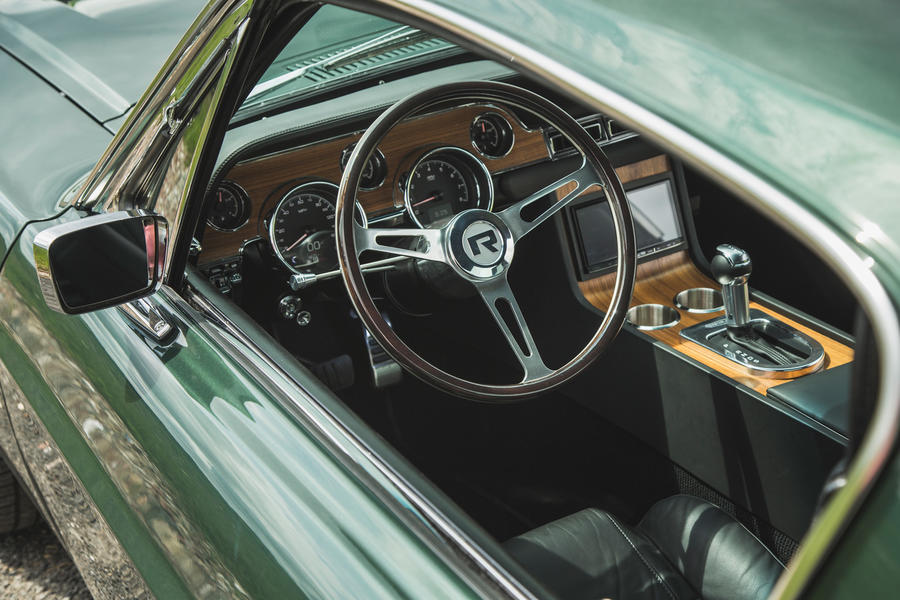 It's this security underwheel and added performance, along with genuine ease of use and numerous mod-cons, that is the Revology's reason for being, and it executes the idea well.

Whether it executes it $210,000 well is another matter, but if you love the noise, adore the 1968 fastback styling and want the convenience an original could never offer, maybe – just maybe – it’s worth the outlay. 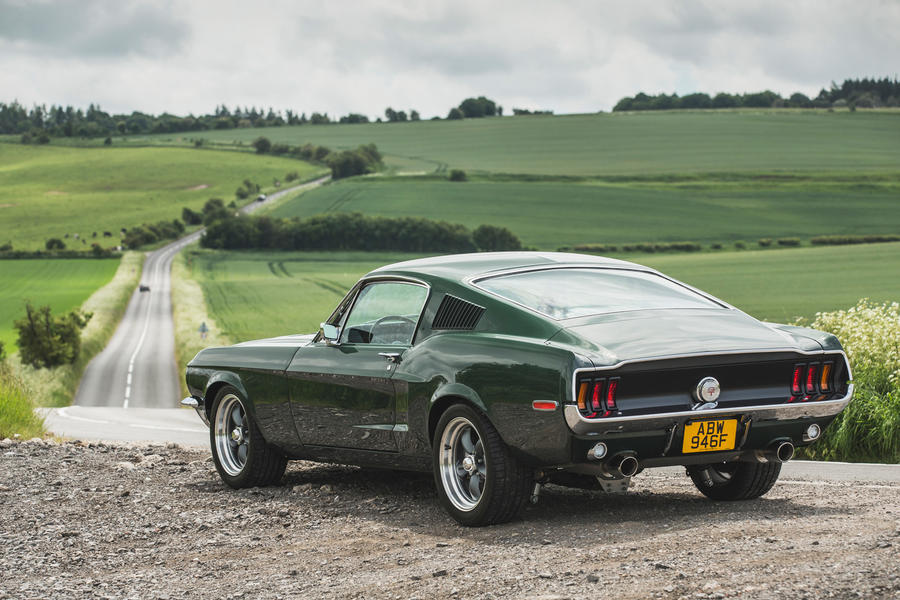 Has anyone watched the entirety of Bullitt, ie not just the car chase?   Remarkably dull!  Only Steve McQueen's charisma keeps it half interesting. That and the classic Lalo Schifrin soundtrack.

Yep, the wheels look all wrong and totally spoil the whole effect!

Is it £48k (the sub-head) or $210k? Same old sloppy editing from Ajutocar I'm afraid. There's a big difference and yes, it does matter to get these things right.