From £18,4457
Renault has facelifted its answer to the Nissan Qashqai. We drive the range-topping Kadjar in Sardinia
Open gallery
Close

You might have a hard time noticing it, but this is actually a new Renault Kadjar. So far as facelifts go, it’s definitely one of the harder-to-spot ones. At least from what you can see by standing a metre or two away.

But I don’t think Renault’s conservatism on this front should be battered too much. Next to the Nissan Qashqai, with which the Kadjar effectively shares everything, the Renault was always the more handsome of the two. The minor tweaks wrought upon its exterior - the new grille design, redone fog-light housings and altered front and rear skid plates, for example - simply ensure this remains the case. To my eyes, anyway.

Of more significance than those slight visual adjustments, though, is the reshuffling that’s occurred within the Kadjar’s powertrain department, where there are now two engines to choose from. Well, two engines and a handful of transmission and power output combinations, to be precise; but for simplicity’s sake, we’ll just go with two engines.

The first of which is a 1.3-litre four-cylinder petrol that - surprise, surprise - is also available in the recently updated Qashqai. Here, it’ll make either 138bhp or 157bhp. And if that doesn’t float your boat, there’s a 1.5-litre diesel with 114bhp or 148bhp, too. And just when you think you couldn’t get any more spoilt for choice, you can also have four-wheel drive - but only if you opt for the top-spec diesel model.

Speaking of which, the Kadjar’s trim hierarchy has also been tweaked. As with the smaller Clio and Captur models, Play now represents the basic offering, Iconic the mid-grade and GT Line the flagship. Unlike those smaller models, there’s a fourth trim - S-Edition - which slots between Iconic and GT Line.

And as for the cabin? Well that’s been treated to a much-needed overhaul as well, as the previous model was beginning to look especially tired on the inside. The main change is to the dash fascia, which now features three rotary dials for the HVAC system, each of which contains digital displays for things like temperature and fan speed à la the Jaguar I-Pace. Sort of. There’s a new 7.0in touchscreen too. While not exactly changing the game for Kadjar, it’s a welcome remodelling. 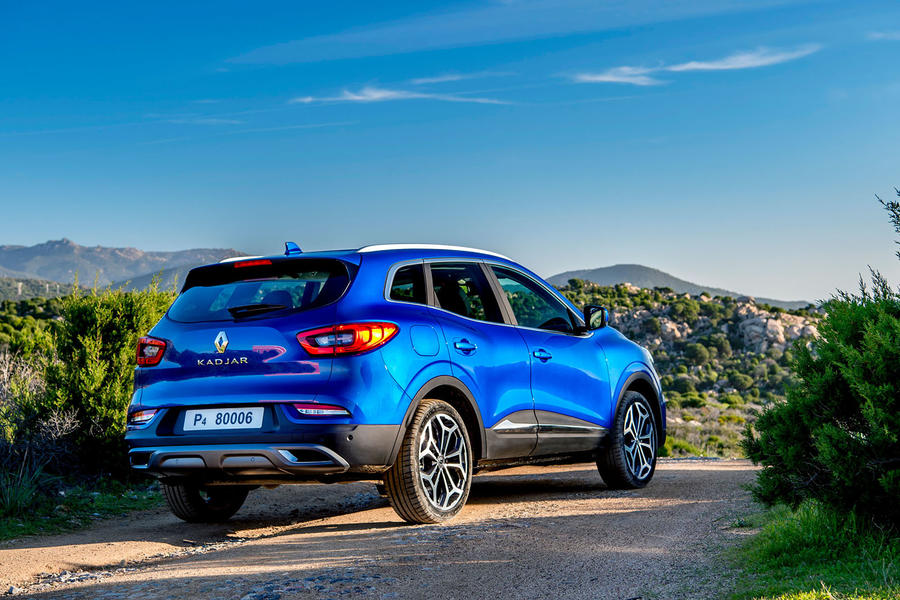 Credit to Renault, that 138bhp petrol is a smooth little motor.

Impressively smooth, even. And it doesn’t feel like it’s wanting for performance, either, which is a bonus, as is the fact it delivers its acceleration in a progressive, no-nonsense fashion. You can tap into its 177lb ft well of torque from incredibly accessible crankspeeds, and if you decide to spin it all the way up towards the limiter, it’ll continue to pull with reasonable enthusiasm without getting too breathy. It’s certainly not an exciting or memorably effervescent powerplant, but it was never going to be given it’s under the bonnet of a car that’s not really supposed to be particularly exciting or characterful anyway.

Its attitude towards the business of going around corners is equally as inoffensive. There’s little weight to the electrically assisted steering rack, and not much in the way of feel. But it does allow the Kadjar to change direction with about as much urgency as you’d expect a crossover to, and I can’t imagine it’ll give many owners concerns about a gross shortage of front-end grip or sure-footedness, either.

I think a Seat Ateca or a Peugeot 3008 would both probably feel like sweeter, crisper-handling prospects. But I also think that people who actually buy cars like this don’t concern themselves too greatly with whether or not their new crossover will be able to carve its way up a twisting mountain road with the agility of a hare - so a lack of dynamic zest here can be excused.

What they probably will concern themselves with is ride quality. And on this front, the Kadjar ticks the right boxes. There’s a reassuring sense of fluidity about the manner in which the suspension deals with undulating road surfaces. Compressions are tidily absorbed, while vertical movement is kept under close control.

The 19in alloys fitted to our GT Line test car did give way to a few jolts over sharper ruts and lumps in the road, but on the whole the manner in which it rides won’t see you taking any unplanned trips to the osteopath. Whether that will be the case back in the UK remains to be seen but, considering the roads that made up our Sardinian test route weren’t of particularly outstanding smoothness, I wouldn’t worry too much.

I wouldn’t worry about a lack of interior space, either. The second row is easily capacious enough for two adults to sit in relative comfort, and a couple of kids will fit back there in plenty of comfort. The 527-litre boot is spacious enough, but if you bought a Volkswagen Tiguan, you’d get 615 litres. Food for thought. 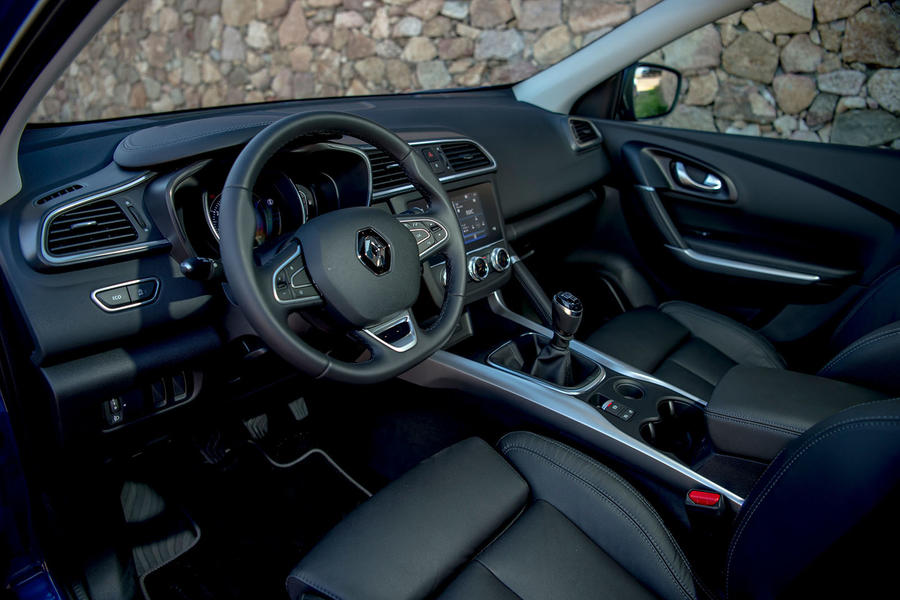 You could certainly do a lot worse. One of the Renault’s big draws, it seems, is value for money; to get your hand on our top-spec, fully-loaded GT Line test car, you’ll need to part with £25,095. For that sum, you get leather upholstery, heated front seats, satellite navigation, a 360deg parking camera and more besides. A comparably specced Volkswagen Tiguan SEL will set you back nearly £5000 more, which sounds like a steal, although admittedly you do get a slightly more powerful engine. And a more refined overall package.

In any case, though, the affordable practicality of the Kadjar will likely be a draw for many family-oriented buyers. And while it’s not a particularly memorable car to drive, no doubt for many it’ll fit the primary car bill nicely. 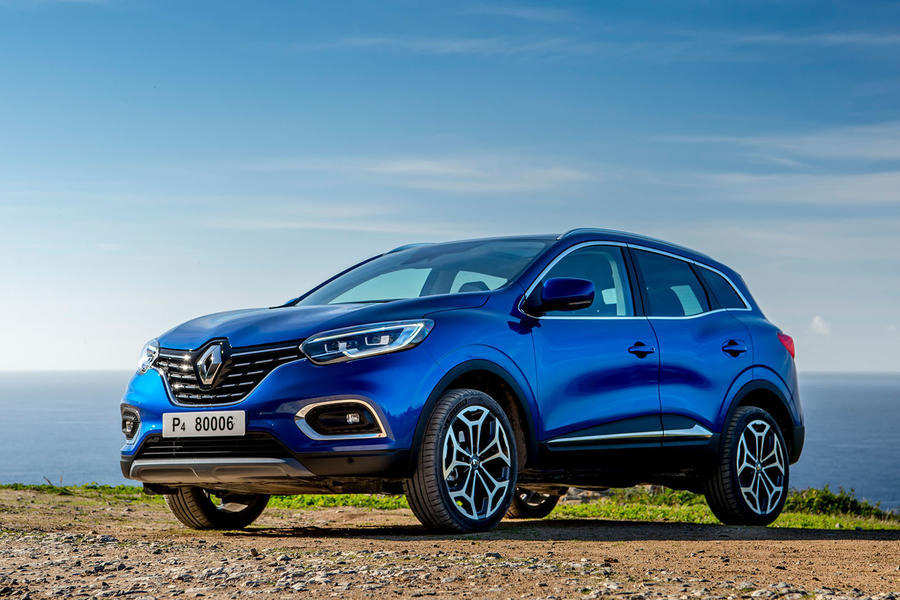 Driven a Kadjar for 2 weeks.

Driven a Kadjar for 2 weeks. Very pleasant companion, although with 3 minor problems. Guess what? All three have been improved for Phase II (centre dash, back, stronger engine)

....you know what? I'm going to treat myself to a brand, spanking new Renault Kadjar.
superstevie 10 December 2018

....you know what? I'm going to treat myself to a brand, spanking new Renault Kadjar.

It might not be for you, but for some people it is a practical choice. It wouldn't be my first choice, but it seems like a perfectly decent car for the money/class.