From £11,3497
Electric supermini appeals with its standout design and charging potential, but lacks finesse out on the road
Open gallery
Close

The concept is simple: here we have the new Peugeot 208, only this Peugeot is driven by an electric motor instead of a downsized internal combustion engine.

This isn’t as glib as it sounds. When building an electric car, many makers – Renault included, with the Renault Zoe – devise an entirely new product largely unrelated anything else in the brand’s line-up. Volkswagen is another example, because the Volkwagen ID3 bears very little resemblance to the VW Polo: neither aesthetically nor structurally.

The e-208 is different because it exists on the same modular platform as the regular Peugeot 208. It also uses the same body and interior as the regular 208, and will be assembled on the same production line. It gets a slightly wider rear axle to make space for the battery and there’s additional strengthening in the subframes, but by and large it’s the same car. Only electric.

Peugeot’s strategy is similarly straightforward. It wants the car's radical exterior design and imaginative cabin to get people into dealerships, where they'll then decide with powertrain best suits their habits. Most will go for a petrol Peugeot 208. Or, if they do big mileage, they might get the 70mpg 1.5-litre diesel. But if electric power works best, no big deal.

And on paper the e-208 looks reasonably impressive. For now there's a 50kWh lithium-ion battery, giving a WLTP range of 211 miles – enough, says Peugeot, for typical owners to get away with only one weekly charge, assuming they charge completely.

From a domestic socket, that takes a while: more than 20 hours. If you’ve installed a 7kW wallbox at home, the time drops to less than eight hours, though at its quickest the battery can charge from nothing to 80% capacity in just half an hour. This is because the e-208 is capable of drawing electricity at a rate of 100kW, and unlike Porsche, which charges extra for the swiftest charging option on the £140,000 Porsche Taycan, that’s true even for the most basic trim level.

Range and price being the most important factors for EV buyers, how does the e-208 compare to its classmates? It’s decently competitive. The new 52kWh Renault Zoe manages 245 miles and at £25,670 will cost near enough the same as the Peugeot, so does a little better on paper. In mid-range 58kWh trim, the ID3 also does better, managing 261 miles on the WLTP test, though it costs considerably more than either of the French cars.

Meanwhile the upcoming Honda e seems strangely lacking. It will cost just over £26,000 but has a quoted range of only 136 miles. And we shouldn’t forget the Vauxhall Corsa-e, which shares much of its hardware with the Peugeot, including the battery, chassis and motor. That arrives in April with a £26,790 price tag and a slightly shorter range of 205 miles.

All of a sudden, there are quite a few zero-emission superminis to choose from. 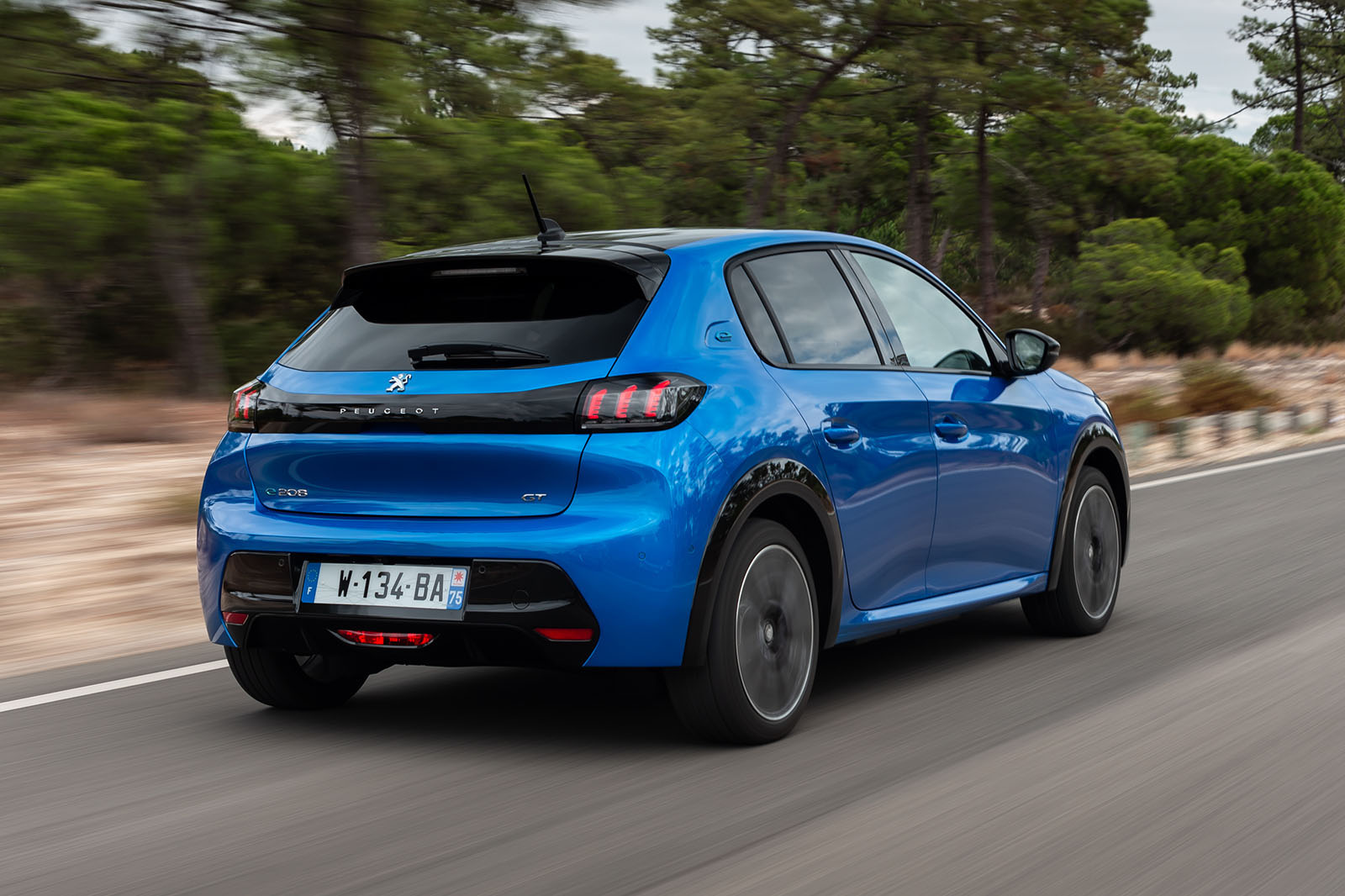 Our test drive is brief and Peugeot claims it is yet to apply the finishing touches to the e-208, so the following is merely an early snapshot before more detailed tests take place in the UK.

What's unlikely to change is the cabin, which is very nice indeed. Our top-of-the-line GT-spec test car costs the best part of £30,000 and benefits from trim flourishes the more popular (and usefully cheaper) e-208 Allure won’t get, but the interior is strong across the range and will doubtless prove a selling point. It’s mature and comfortable, but also a bit whimsical, with quirky rubberised plastics that look and feel premium, plus contrast stitching and a new dual-layer 'three-dimensional' instrument binnacle.

Peugeot has also reprised the i-Cockpit, with is tiny, low-sitting steering wheel. Peugeot still insists the majority of owners like it this way. I don't mind it, and ergonomically it's fine for pootling at low speeds, but out on open roads I've always felt the shrunken diameter can make steering inputs feel a bit snatchy and, if you're taller, the rim obscures the dials. If you really dislike it, the Vauxhall Corsa-e will get a conventional steering wheel but should otherwise offer a very similar driving experience.

Performance is objectively good, though there's a sense of internia that comes from lugging around more than 350kg of battery-electric powertrain and it is ever-present. With 134bhp and a rich 221lb ft, the e-208 is nevertheless quick enough by supermini standards, darting to 62mph in 8.1sec and accelerating to 30mph is a slither more than two seconds. Step-off (which is sharper in Sport mode, softer in Eco) is particularly impressive, which will make for fuss free-free city driving. Then again, what pure electric car doesn't do well in this regard?

Dynamically the outlook is less convincing. This feels very much a point-and-squirt device, and on its stiffened suspension the chassis never delivers much in the way of flow. Tuning the suspension for a 1455kg supermini must be a truly unenviable task, because with so much weight but such a small footprint, how do you find a sweetspot of ride comfort and body control?

With its higher spring rates and firmer dampers, the electric 208 makes a decent fist of the latter but in doing so sacrifices a good deal of the former, and that has worrying implications for British owners who won't, naturally enough, view the car as some kind of zero-emissions hot-hatch (although the next 208 GTI may well be electirc). On the rougher surfaces of our Portuguese test route, at times the chassis feels outright brittle, each corner reacting all abruptly to lumps and without much in the way of unity.

It's a shame because the e-208 does well elsewhere. The steering benefits from more weight than in ICE models, which calms the action and makes for more satisfying, natural-feeling direction changes. The accelerator is also nicely calibrated, being intuitively linear, and the though the brake action still needs some finessing, there are two well-judged levels of energy recuperation to choose from for deceleration. The more aggressive setting allows you to drive the e-208 mainly using one pedal, which quickly becomes your default style with familiarity.

It's also worth remembering that because of the shape of PSA's battery pack, in the e-208 you get the same excellent foot-well space as the regular ICE models and the same competitive boot capacity. With electric cars, neither attribute should to be taken for granted, and there's also the ability to pre-condition the car and initiate charging remotely via the MyPeugeot Smartphone app. 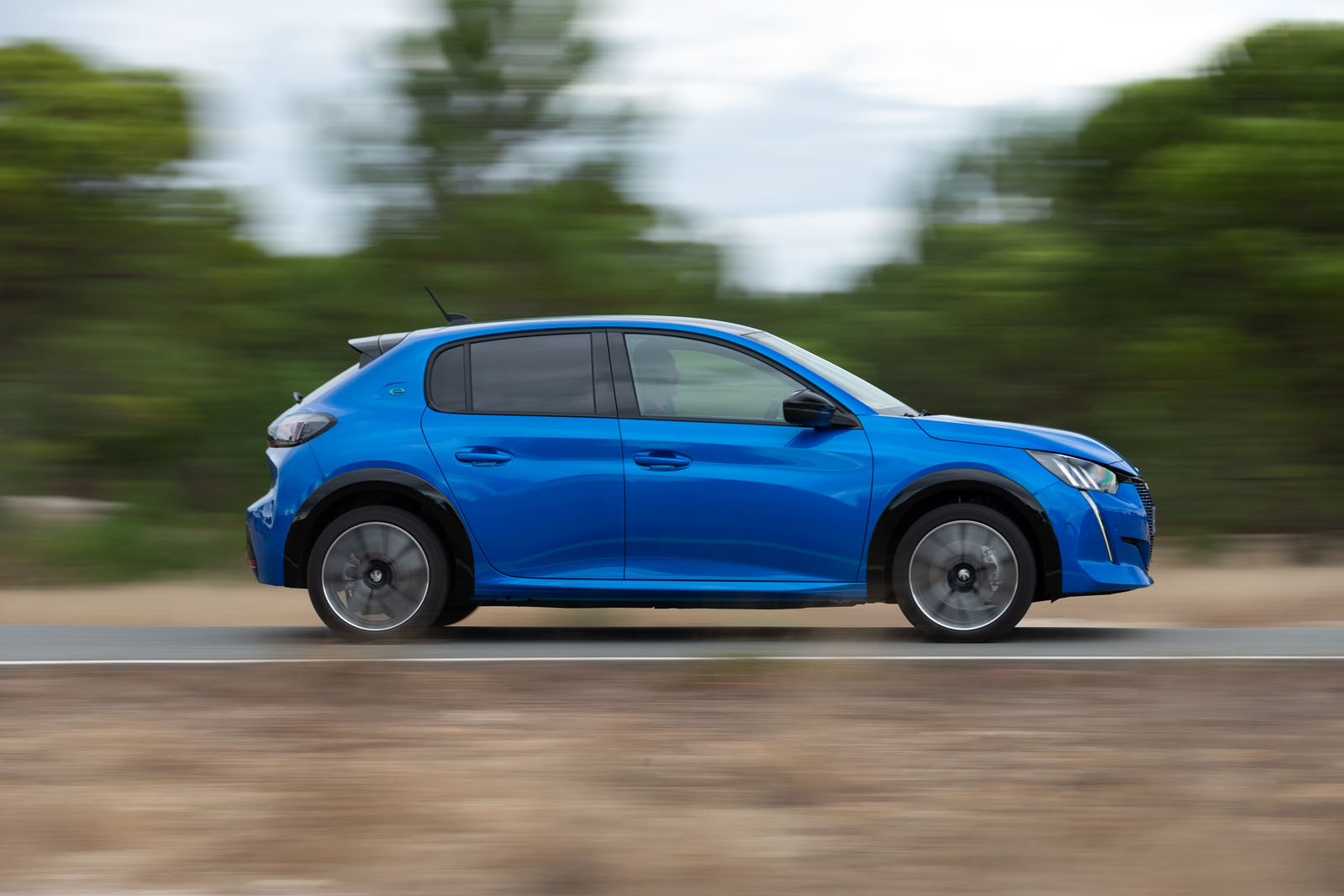 Until we’ve had a proper go in the e-208 on British roads, it’s difficult to say whether the ride quality is on the right side of acceptable. Moreover, Peugeot is also still tweaking this car before deliveries begin next year. And with so many comparably priced electric superminis arriving in the next few months, it's probably worth waiting for the inevitable group-test showdown, which Autocar will aim to conduct as soon as possible.

However, broadly speaking the Peugeot e-208 is a likeable effort. Attractive inside and out, it has a good but not exceptional driving range, makes no concessions in terms of interior space and comes prepared for the time when 100kW public charging stations are widespread.

I think the lower spec without the wheelarch cladding looks better. My main worry with the new 208 is Autocar has said previously the windscreen has been slid back to create a longer bonnet. The windscreen already feels too far back in some stablemates I have been in, although I have never been in the outgoing 208, but it does look close close in the photos, especially for someone who needs the seat a bit closer to the pedals. The review would have benefited describing the battery layout considering it is different to the competition. The outgoing 208 GTI was a car I considered when I last changed, so will be very interested in an electric 208 GTI.