The Mercedes GLC 300e is one of a pair of plug-in hybrid options offered within its maker’s mid-sized family SUV range. Updated as part of the 2019 facelift on the car, it offers the same 13.5kWh drive battery as the GLC 300de diesel hybrid but it’s slightly lighter, faster and cheaper than its sibling and has better claimed all-electric range.

Mercedes says this diesel-electric version, meanwhile, has the better overall running economy, not to mention a WLTP CO2 emissions rating low enough to score the lower benefit-in-kind rating of the two. Right now, the difference could be 12% versus 15%, depending on individual model specification.

The plain truth is that plenty of other similarly sized plug-in hybrid SUVs now offer better tax-qualifying numbers, but Mercedes sells the GLC on its versatility, and its freedom from some of the compromises that can be associated with some of those rivals.

For starters, this car offers permanent mechanical four-wheel drive, with an electric motor sandwiched between its engine and gearbox rather than nestling between its rear wheels. Where a Land Rover Discovery Sport P300e is rated to tow up to only 1600kg on a braked trailer and the latest Toyota RAV4 PHEV even less, the GLC 300e will haul up to two tonnes behind it safely. If you’re the sort of person who frequently makes use of your SUV’s added utility value, that might very well matter to you.

While other GLC derivatives offer self-levelling air suspension (as do certain of the GLC 300e’s rivals), it sadly doesn’t. All UK-market GLC plug-in hybrids get the same passive steel coil spring set-up by virtue of all being AMG Line trim, or extensions of it. It’s described by Mercedes as a sport suspension set-up but there’s no driver-configurable or adaptive element to it.

The car’s combustion engine is a 208bhp 2.0-litre turbocharged petrol four-cylinder, which combines with a 121bhp electric motor to make a total system output of 315bhp, and for up to 516lb ft of torque. They’re healthy-sounding numbers, even if the car rarely feels like its performance is quite as you might consequently expect it to be. 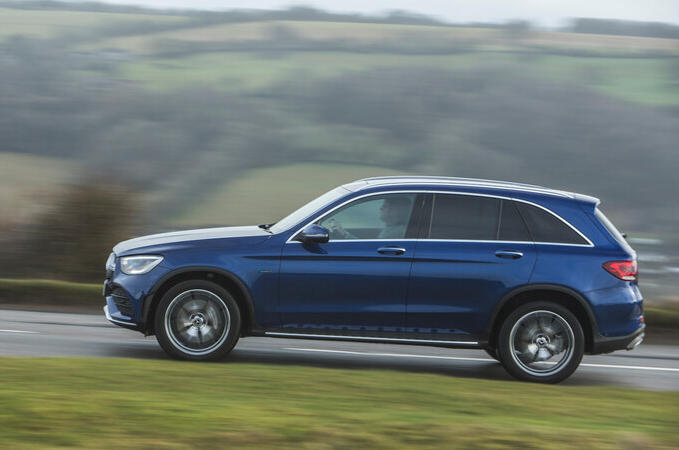 There’s an all-new GLC expected next year. This one remains a handsome- and contemporary-looking thing from the outside, though, and it’s pleasant and pretty luxurious to travel in.

The cabin doesn’t look as up to date as some of Mercedes' other models. It doesn’t have the integrated, side-by-side, black-panel twin displays that the latest-gen models get, and the infotainment system it uses isn’t as large as some, either. It’s still easily navigated, though, not least because the GLC has still got fixed heater controls and matching fixed infotainment shortcut buttons underneath them, which are great aids to usability and guards against distraction.

The front seats offer lots of support, comfort and adjustment. Going for the Premium Plus trim of our test car gets you extra electrical adjustment for them as well as a memory function for their set position, but the basic seat design is the same as in lesser trims and it’s very good.

Second-row seat space is generous, with enough room for taller adults even under a panoramic glass sunroof, although the seats themselves don’t slide and offer only outer-seat Isofix child seat points. Boot space is decent; just under 400 litres up to the window line, and losing out on just a couple of inches of loading height compared with regular GLCs, but countering with useful under-floor charging cable storage space. 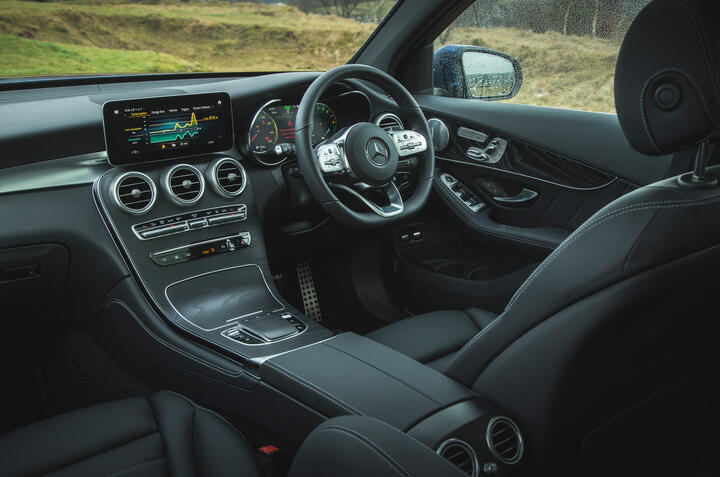 Like other plug-in options, the GLE 300e leans predominantly on its hybrid system at town speeds, particularly so on a fully charged battery. It’s quiet and pleasant when running electrically, but it’s not as smooth or quite as responsive as rivals because its nine-speed gearbox is always fully involved in proceedings. It often needs to shift as you accelerate, and while some people won’t notice, you probably will if you’re used to the perfectly seamless and linear performance of an electric car.

The car’s outright performance when running electrically is adequate but doesn’t tend to make it feel particularly nippy or fleet of foot. Get deep into the accelerator pedal’s travel in order to seize a gap in traffic and you’ll likely rouse the petrol engine, and have a slightly delayed, two-stage response to your input to contend with.

However, the GLC 300e’s combustion engine does run smoothly and quietly most of the time and it provides what feels like an ample amount of grunt even when the drive battery has been emptied. Suffice it to say, though, it certainly doesn’t feel like 315bhp’s worth, let alone 500-odd foot pounds.

There’s just the merest background note of thrashiness about the 2.0-litre four-pot’s refinement when it’s working hard, but it’s never resonant or uncouth. When you do need the car to put on motorway speed quickly, for example, it pays to select a lower gear first in order to make sure the engine’s running and ready to respond. When it is, the car accelerates fairly keenly.

Running efficiency doesn’t seem to be this plug-in hybrid’s strong suit, though, and its electric range does little to recommend it, either. In a 12deg C ambient temperature, we saw an indicated electric range of just 17 miles. The car duly delivered that against the trip computer, but all of its rivals (tested recently in our PHEV SUV triple test) would likely have gone further. And most of those rivals would also return better long-range petrol economy, too: in a GLC 300e, it seems 32-35mpg at steady UK motorway pace is about all you should expect.

Despite that sport suspension we mentioned earlier, the GLC remains one of the more comfort-oriented SUVs in its class, and any dynamic penalty its hybrid powertrain might impose seems pretty minimal in practice.

It rides over urban surfaces comfortably, retaining good outright body control and plenty of compliance. The 20in alloy wheels of our test car did add a slight abruptness to the ride over sharper edges, though. For that reason, and because they’ll also impose a penalty on running efficiency, we’d stick with a lesser trim level and the car’s standard 19in rims unless you really want the technological trappings of a pricier car (digital instruments, wireless smartphone charging, a Burmester stereo, or Mercedes’ full suite of optional driver assistance systems).

There’s a slightly under-damped feel about the car’s close body control over trickier cross-country roads, and its medium-light, medium-paced and well-filtered steering won’t do much to engage you. The GLC controls its mass well in outright terms when cornering and dealing with bigger, long-wave inputs, though, and is stable, secure and fairly relaxing to drive at everyday speeds. 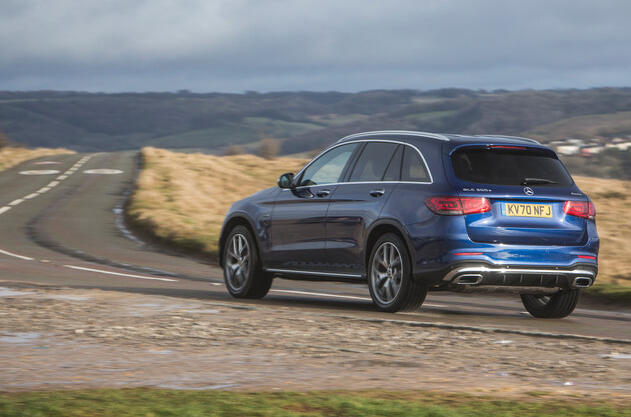 This is an ageing model whose plug-in hybrid powertrain might give it a certain visibility for fleet drivers, but probably won’t make it an automatic choice even among GLC customers. It’s more expensive than key rivals at list price, and the GLC’s age is unlikely to do much to sweeten the burden of that price on monthly finance.

There are certainly smarter buys than this if you’re looking to switch to a PHEV for your next family car, then. But even so, considering its enduring luxury appeal and its undeniable versatility, this GLC still has a hand to play. It may not be a winning hand but it's a pretty flashy one, and it isn't played badly by any means. 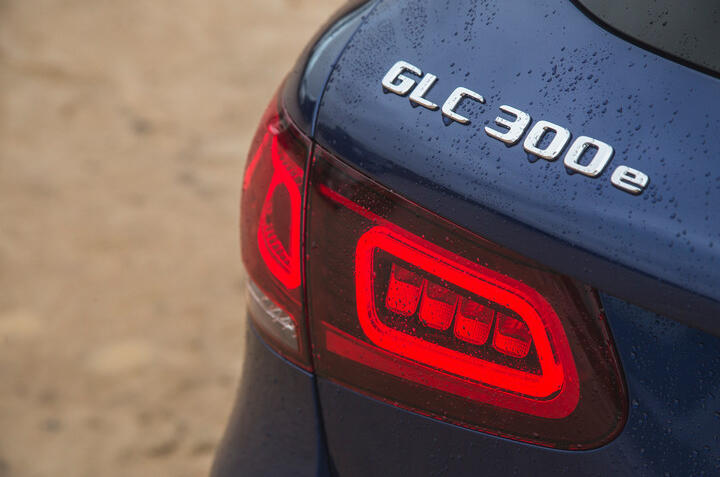 13kwh to do 17 miles when its 12 degress, truly shocking figures for a 60k tax dodger, this morning it was minus 2 could you expect 15 miles? Afterwhich would you expect the mpg to be sub 25, over to you auto car.