This is where the Mercedes A-Class range begins to get interesting, at least as far as keen drivers are concerned.

Below this A220 petrol option, there are only diesels and the duo of petrol derivatives powered by the frugal but decidedly unsporty 1.3-litre turbo four-pot that Daimler has recently developed along with Renault and Nissan. Above here, there is only the discretely sporty A250 AMG Line and the properly sporty Mercedes-AMG A35 4Matic – along, ultimately, with a replacement for the properly nutty A45 AMG, due to come later.

So what chance this car has the perfect, premium-worthy blend of everyday pace, efficiency and refinement, then, all offered at an appealing price? A decent one, on the face of it. Unlike the lesser petrols, the A220 gets all-independent suspension by default. It’s available in upper-level AMG Line trim only, and only with Mercedes’ seven-speed twin-clutch gearbox; but, factoring in those things, it’s only £640 more expensive than an equivalent A200 – which is less than half the price of Mercedes’ cheapest options bundle for the A-Class.

Going for A220 rather than A200 would mean accepting the difference an 18g/km CO2 penalty might make to your annual tax return; also, a four-group insurance group hike – assuming you pay for your own cover. 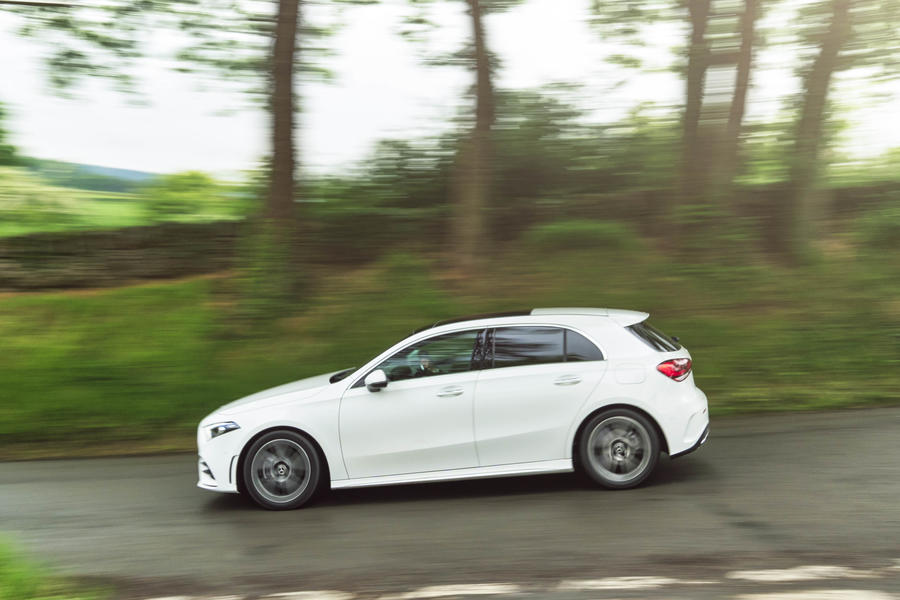 Cover up the badge on the bootlid and you simply can’t tell an A220 from any other A-Class AMG Line. The car’s two-tone 18in wheels offer the road a wider-section, lower profile tyre than you get on lesser-trim A-Classes, but the suspension tune is the same as you’d find on any other all-independent, AMG Line-trim example of the car.

Although Mercedes’ brochure describes the suspension of lower-end SE and Sport-trim models (complete with torsion beam) in the same terms as that of AMG Line cars (they call it ‘lowered comfort suspension’), wider test experience teaches that there’s quite a bit of difference in the ride and handling of these A-Classes. While the former have a softer and more supple gait that should play well to fans of comfort and isolation, the latter definitely feel firmer-riding and more sporting. AMG Line cars should therefore probably only be considered by drivers who want a dynamic cutting edge from their cars, rather than Mercedes’ more traditional comfort bias.

The A220 is a fine case in point. It has a ride that’s comfortable enough, but slightly busier over smaller lumps and bumps than you might expect it to be, and a touch noisier over coarser surfaces too. The car comes with a choice of four driving modes (Sport, Comfort, Eco and Individual), but none of them allows any adjustment of the suspension, since adaptive dampers are the preserve of the A35 4Matic. The upshot is that, while the car deals with most road surfaces well, it rides more testing ones with a touch more lateral head-toss and vertical fidget than a really well-sorted hatchback might.

Handling is good, without being so good that it really stands out for praise. The A220 corners slightly flatter and sharper than some of its range-mates, and feels precise, tidy and fairly adhesive on a winding road – but it doesn’t have the control feedback or close body control to come across as genuinely compelling to drive. While it reminds you of a warm hatchback done with a particularly light touch, it’d make a VW Golf GTI look like a competition machine for sheer purpose and involvement. That said, Mercedes doubtless never intended for this to be thought of as a driver’s car – and judged in less specialist terms, it seems complete and accomplished. Steering is medium-light and strikes you as neither particularly direct nor indirect.

The car’s 2.0-litre turbocharged engine, meanwhile, serves up that just-so performance level that always tends to feel right on compact, upmarket executive transport: 0-62mph in around seven seconds, a top speed of around 150mph, and enough torque to drive assertively on the road and to adopt a faster stride easily when the need arises.

Compared with the A-Class’s 1.3-litre petrol options, the engine does indeed seem much stouter and more flexible in the middle of the range – and it also revs beyond 4500rpm much more freely and willingly. The car’s torque output is enough to move the car along on part-throttle without needing to dive so deep into the pedal travel that the seven-speed gearbox becomes hyperactive (another distinct advantage over the 1.3).

It’s not the most cultured engine to listen to at work, lacking some of the audible appeal even of other 2.0-litre turbo motors you might compare it with, and sounding slightly prickly and thin at times. It’s far from noisy or unrefined, though, and will also allow the car to return a real-world 40mpg on an averagely lengthy, unhurried trip.

The rest of the car’s package is much as we’ve reported of other A-Classes. The car’s cabin is an undoubted selling point, with perceived quality that’s more about impactful showiness than close-inspection substance but is nonetheless impressive, and a ritzy technology ambience. Practicality is good, except for what seemed to this tester unnecessarily bulky interior doorhandles and their surrounding consoles which eat into outboard knee-room a little. 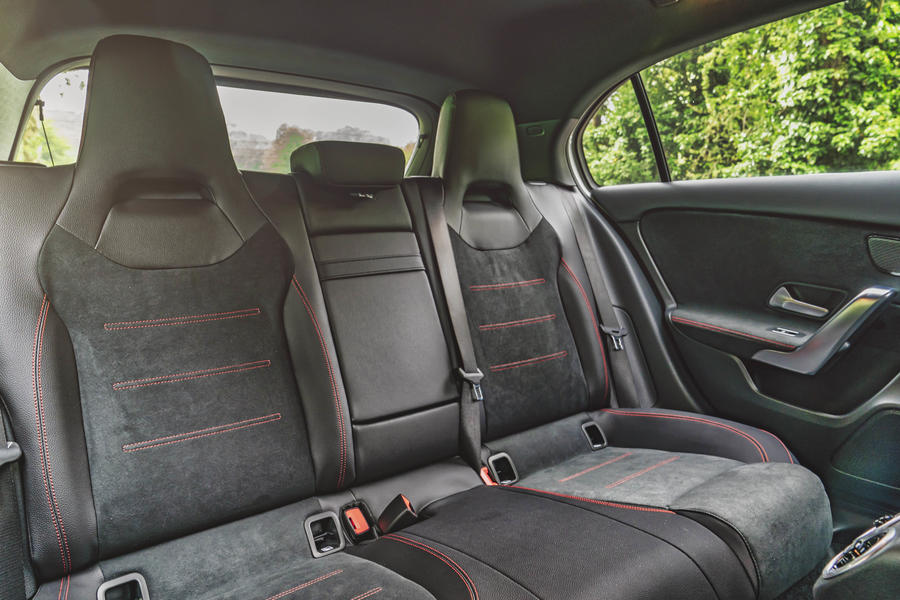 As A-Class derivatives go, this is certainly the most rounded and generally accomplished we’ve driven yet. Assuming that your budget will accommodate an after-options transaction price in the low-£30,000 ballpark, that you want a brisk turn of pace from your car as well as everything else, and that you’re not relying on 50mpg motorway economy or super-low carbon emissions for your benefit in kind tax – it’d be the one we’d recommend.

Mercedes offers it in front-drive and 4Matic all-wheel drive – and, while the latter comes with slightly poorer fuel economy, it does get the bigger 51-litre fuel tank which only otherwise features on the Mercedes-AMG A35. For fans of quick-ish hatchbacks with decent brim-to-brim range and plenty of all-weather usability, that’ll be worth bearing in mind. 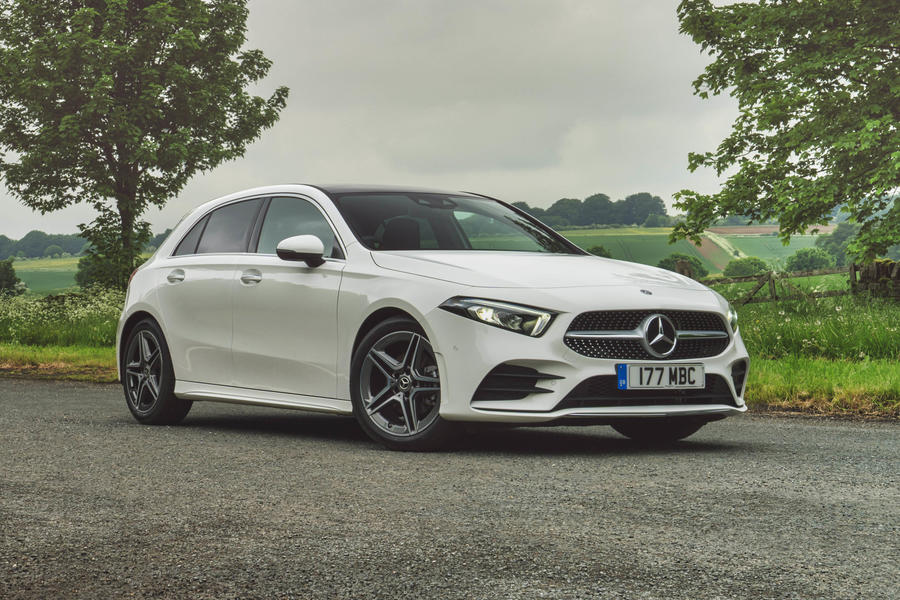 ...had some advisement from an average reader...buy the vehicle with the interior you like best. And I don't seem to understand what popular consensus is.

Because those characteristics aren't high on the list of the average buyers concerns? The hundreds of other things that define what people want in a car will probably come into play.

Also it's not popular consensus, manufacturers market research showed that the majority of buyers don't know or care which end is driven and more concerned with how the interior looks and feels.

You´ll most definitively notice which wheels are driven

if you live anywhere, where icy conditions are very common half the period of the year.That people where you live don't care, probably means - icy conditions simply aren't that common.

Typical Mercedes product, just like any of the others, so, it’s a take your pick,the way it should be.

Typical Mercedes product, just like any of the others, so, it’s a take your pick,the way it should be.

The E class , C class etc are interchangeable? Mercedes have their faults but let's try intelligent informed debate or else it's just as useful as bunch of daily mail readers discussing brexit on line.