From £29,0358
We finally get behind the wheel of Merc’s company car favourite to see if it gives the BMW 330e something to think about
Open gallery
Close

A late arrival, mainly. Given we first drove the refreshed C-Class in summer 2018 and the hybrid C300e was first launched in some markets last year, it’s surprising that only now right-hand drive, UK examples are available for us to try.

You can probably blame a mixture of last year’s WLTP testing bottlenecks and a certain ongoing pandemic for that. Crucially, though, it means that since the updated compact executive first arrived BMW has introduced a whole new generation of 3 Series, and Audi has given the A4 a mid-life makeover.

The other major market trend that’s changed in that time is the importance of PHEVs in a brand’s portfolio. While the market share of full EVs tentatively grows, the ‘stepping stone’ plug-in hybrid tech remains (for now) popular, and certainly more so than in 2018. Nowadays, BMW will tell you that its 330e is one of the most popular variants, so it’s unusual that Audi still doesn’t offer a plug-in A4.

The C300e, then, should nab some useful volume (particularly on the company car side) for the brand. And, don’t forget, Mercedes also has the rather good diesel electric C300de. The petrol version used to be dubbed C350e, but for reasons not entirely clear it’s lost 50 badge points for the facelift.

That’s despite it putting out a chunk more power than the old car, mating a new generation 2.0-litre four-cylinder unit to a much healthier 120bhp electric motor (the C350e’s was a mere 80bhp) with all power put through the rear wheels.

Crucially, the battery has more than doubled in size, from 6.2kWh to 13.5kWh. That takes the quoted range from a rather measly 19 miles to a much more useful 34. 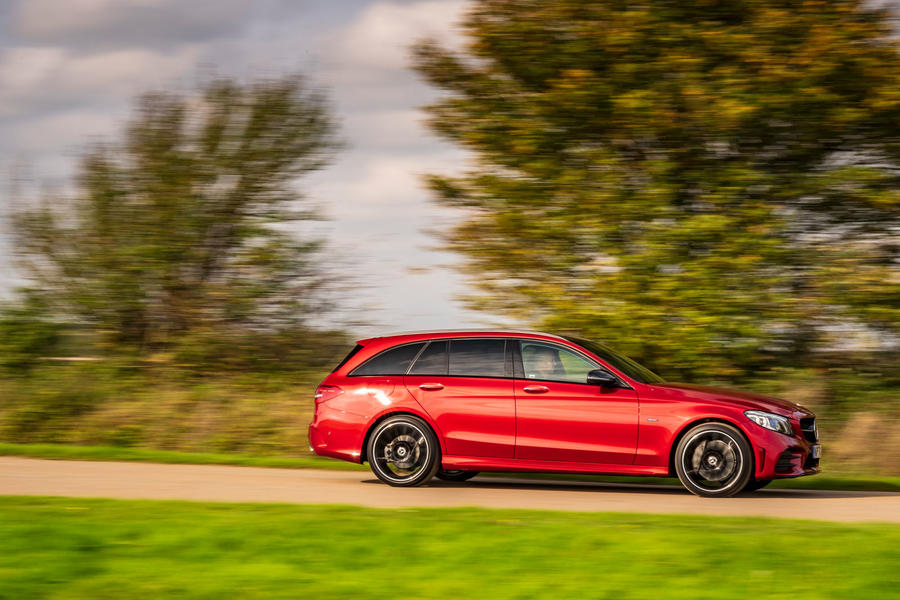 It’s worth disclosing that we drove this C300e back-to-back with another of Mercedes’ niche-busting small plug-in estates - the newer CLA 250e Shooting Brake. Technically speaking, it’s the former that’s an older design and platform, with around 25% fewer quoted EV miles.

Yet, from our afternoon’s experience, it’s the older (albeit more expensive) model that proves notably more pleasurable to drive. Partly this is down to the more accomplished rear-driven platform versus the front-driven CLA, but there’s other factors, too.

The most striking is engine refinement. After the raucous din of the CLA’s 1.3-litre petrol, the more cultured 2.0-litre in the C300e feels like a revelation. Switching from EV to petrol mode is barely perceptible at a cruise, while even when you force the pistons back to work by pinning the throttle from low speed the change is far from unpleasant.

The gearbox, too, is at once both smoother and more responsive than its smaller sibling. It slurs ratios competently at a cruise, not holding onto gears too long, while if you flip the coin for more energetic driving manual mode offers far greater control over downshifts. It’s decently quick, too; get the engine spinning and there’s ample punch for overtaking and even a modicum of fun to be had.

The downside, however, is that it’s more reliant on its combustion engine at times. EV performance is decent enough, but it’s often all too easy to cross the throttle threshold and engage the motor. Still, learn to be gentle and it’s manageable - we managed an EV range in the high twenties, respectable for the mixed route and only a few miles off the CLA's figure on similar roads.

Even as the competition ups its game, the C-Class remains the default choice for those who value comfort more than agility. Our car, fitted with adaptive air suspension, was very composed over both low-speed potholes and high-speed surface impacts, but retained a reasonable amount of body control to avoid much head toss and general seasickness.

Granted, push on and it feels every kilo of its 1870kg mass, and it’s not as agile, incisive and engaging as a 330e. But it resists understeer well enough, is generally vice-free, while the steering is accurate, if remote. With the likelihood most C300e drivers will spend more time ploughing motorways than tossing it into bends with abandon, it’s a fair sacrifice to make.

One area you might expect this C-Class to falter in the face of fresher rivals is in the cabin. And, sure, without the glitzy touches and slick dual screen layout of Mercedes’ newer offerings it doesn’t wow from the get-go. But it’s still a welcoming, user-friendly environment (slightly fiddly infotainment aside), with enough perceived quality and plushness to satisfy.

One black mark, however, is practicality, and that’s quite a key one for any estate, regardless of size. Up front, bar a slightly cramped footwell for taller drivers, it's fine, But rear seat space is starting to fall behind the best, and more importantly the electrical gubbins drops the 490-litre boot to a measly 315-litres. The same is broadly true of plug-in rivals, however. 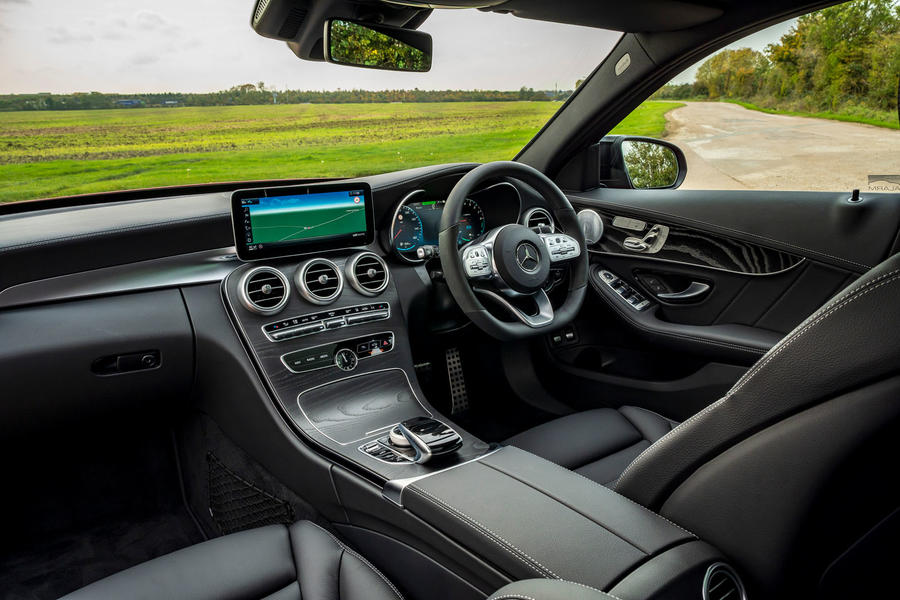 This is where it gets interesting. On a pure numbers basis buyers would see the considerable economy advantage of the diesel C300de (and, without back-to-back testing, we reckon our 60-70mpg of the petrol would be quite easily beaten).

But we must acknowledge changing public attitudes towards diesel fuel, and its plummeting popularity. That might not bother you, but with the expectation that the residual values of newer diesels will start to suffer the increased cost in depreciation might make the economy benefit less valuable. The C300e is more enjoyable to drive and more refined, too.

It wouldn’t be our first choice of plug-in compact executive, with the 330e providing a broader range of dynamic talents and a more modern feel inside and out. But don’t discount the Mercedes - and on that note, with the new generation C-Class arriving on the scene next year, you might find some favourable bargains out there on this one. 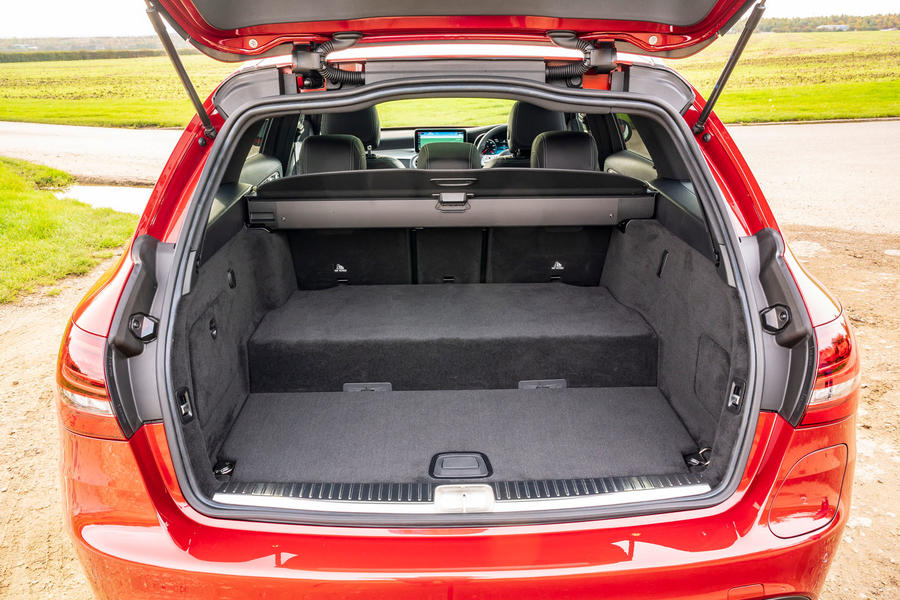 I actually bought this very press car from a dealership in Southend on Sea. Mint and with only just  2k miles on the clock it was a bargain too. I've driven the 2017 BMW 320d Touring for 3 months and while it was a nice drive it certainly wasn't exciting. I agree that the Beemers interior is awful, like a plastic convention exhibit, albeit a good quality plastic exhibit. The Merc is a much nicer place to be in my opinion. As for how the merc drives, it does the job and on the ever deteriorating British roads that air suspension is a godsend. It may wallow in comfort mode but at least you keep your fillings in your teeth on the certain potholes you'll find on our roads. I do agree that the battery hump is a proper ball ache to begin with but you do get used to it and my days of prams and child seats are now well behind me so I don't need as much luggage space anyway. I picked it up before the second hand market went through the roof. I've put 6k miles on the clock and WBAC will still buy it off me for £1500 more than I paid for it. So even if you think it's a dud of a car, it's a dud that will make me smile in my pocket and behind the wheel. I happen to think it's a bit of a looker too, but I'll agree that all car looks are subjective.

stop smashing your gums together
View all comments (6)