Have you noticed recently, when walking or driving the city streets after dark, how many windows are lit up not the colour of halogen but any lurid combination of red/blue/green? Suddenly, coloured LEDs are everywhere, seemingly mostly installed by young people.

The reason I bring this up is because of the dashboard in the new Mercedes C-Class Estate that has just arrived at our door in the UK. The entire thing has ambient backlighting, even including the air vents, along with the rear door handle panels and the little panel in the roof. You can choose from a myriad of colour schemes (we liked soft pink best) through the giant new touchscreen, which has supplanted almost all of the physical controls.

This is endemic of the priorities that seem to now lie behind not just the new junior executive Mercedes-Benz but the car industry as a whole, reflecting a trend in wider society. Technology is the name of the game. A survey a few years ago found that way more car buyers would spend extra to get better infotainment features than additional safety systems. Ignoring the fact that ADAS are too often subpar (although actually not, I must clarify, in the C-Class), that says quite a lot – and shows that Mercedes is probably playing the right game.

The MBUX system facilitated by that 11.9in touchscreen has conversational voice control (which apparently allows you to form a creepy “emotional bond”). It can connect to a special app on your phone. It can wirelessly supply Apple CarPlay or Android Auto mirroring. It has augmented-reality sat-nav. It hosts the climate controls (which, although never ideally located here, are at least decently integrated, if still requiring a tap too many for some things). And it sits alongside a 12.3in digital instrument display, again customisable through several layouts (dials with the sat-nav between for us, please). I’m sure you get the picture. Or if you don’t, just turn to, tellingly, the first page in the (digital) brochure.

Are we complaining? Not really. The system works perfectly well and is easy enough to learn. It looks very slick and it responds quickly to inputs. And it never once went even slightly haywire during our week with it. Will that all still be true in a decade’s time? Now there’s another question entirely. 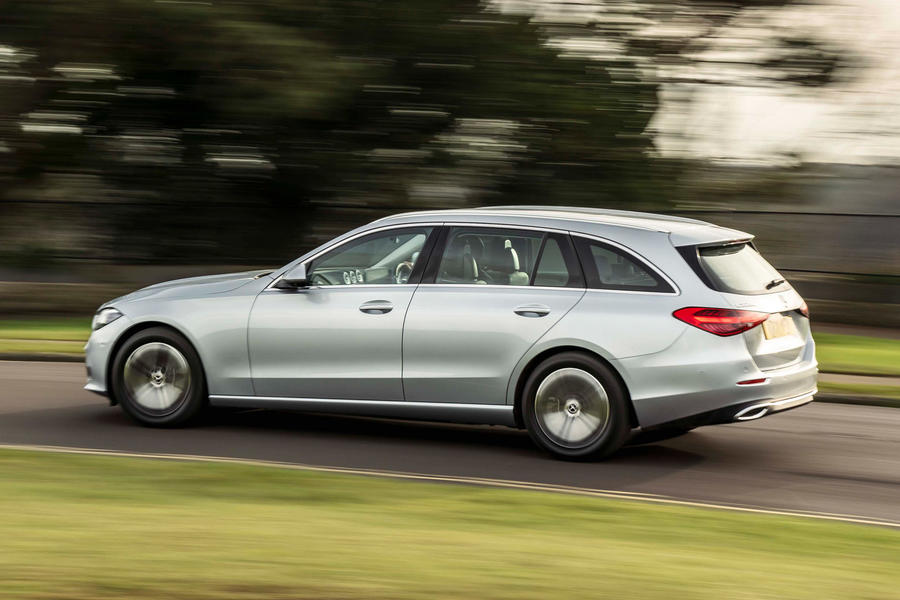 The C-Class we’re testing in particular is the C220d – that’s right, a new dirty diesel in this day and age. Except it’s not dirty, actually. It uses a new 2.0-litre four-cylinder engine with Mercedes’ new EQ Boost system, meaning a 48V integrated starter-generator and small battery that work together to recuperate and resupply energy and thus improve efficiency.

The official papers state that this 1815kg car emits a mere 124g/km of CO2, 0.007g/km of NOx and 0.0002g/km of those lung-infesting ultra-fine particles that we all so worry about. This information is available because the C220d is compliant with Real Driving Emissions 2 (RDE2) regulations, which incidentally lowers its benefit-in-kind tax rating from 32% to 28%.

That will be pretty appealing for company car drivers. Certainly not as appealing as the 1% payable on a fully electric car, you may well counter, but can you name an electric car that has an official range of 873 miles? Yeah, thought not. And that official figure of 60.1mpg isn’t entirely unrealistic, either. Over 565 miles at an average of 35mph, it achieved 57.8mpg; and on one morning’s 65-mile congested-motorway commute, averaging 52mph, it peaked at 66mpg; all without any hypermiling techniques. Music to our ears in these dismal days.

Would you know the C220d is a diesel? Start it up on a cold morning and you sure would, but once it’s warmed and on the move, the engine is a very smooth performer. It has plenty of punch as well, with the ability to blast away on a surge of mid-range torque, all while remaining impressively isolated from the cabin.

The nine-speed torque-converter automatic gearbox must also take some of the credit, for while you can naturally sense its shifts, they’re swift and sensible. Its behaviour never jars amid the smooth driving experience, which certainly isn’t a given any more.

While the jump from Mk3 to Mk4 C-Class was significant, this Mk5 is more an evolution of its predecessor, employing an updated version of the MLA platform. The suspension is similar to before, with double wishbones at the front and a multi-link arrangement at the rear.

Ride comfort is better, but it had to be said that this aspect of the Mk4 was somewhat disappointing, and there’s still room for improvement. Thankfully, it doesn’t suffer unpleasant firmness from trying to be a sports car, but the graceful primary ride is sometimes joined by an unpleasant secondary ride when the road gets rough.

Even so, this is still a rather refined thing, so a very pleasant cruiser. And if forced by traffic onto a rural rat run, you can enjoy controlling what is a surprisingly nimble chassis through direct and accurate steering. It lacks the meaty feel of the rival BMW 3 Series Touring, sure, but there are faint echoes of the forthcoming AMG-fettled C-Class models to be heard.

We took three adults with us on one long journey, and all of them came away impressed by the hushed and comfortable qualities of the car, as well as the commodiousness of the rear.

There’s 21mm more leg room, 22m more elbow room and 13mm more shoulder room than before, according to Mercedes, and indeed you would have to be well over 6ft tall to want for more.

The boot is also a good size, at 490 litres and extending to 1510 when you fold the rear seats down. You can easily get multiple bulky items in there, so it fulfils the practical estate brief. This compares with 500/1510 for the 3 Series Touring and 495/1495 for the Audi A4 Avant.

So much time do we spend testing high-riding SUVs now that the C220d feels preposterously low to get into and load up with luggage, and this is a benefit on both counts. You drive with your legs stretched out in front of you, rather than like you’re on the loo, and you need lift heavy items only a few feet off the ground.

The seats are comfortable and supportive as well, thanks in large part to myriad options for adjustment, so the only criticism we have (as in the old C-Class) concerns the bulging centre console, which impedes upon your left leg somewhat. 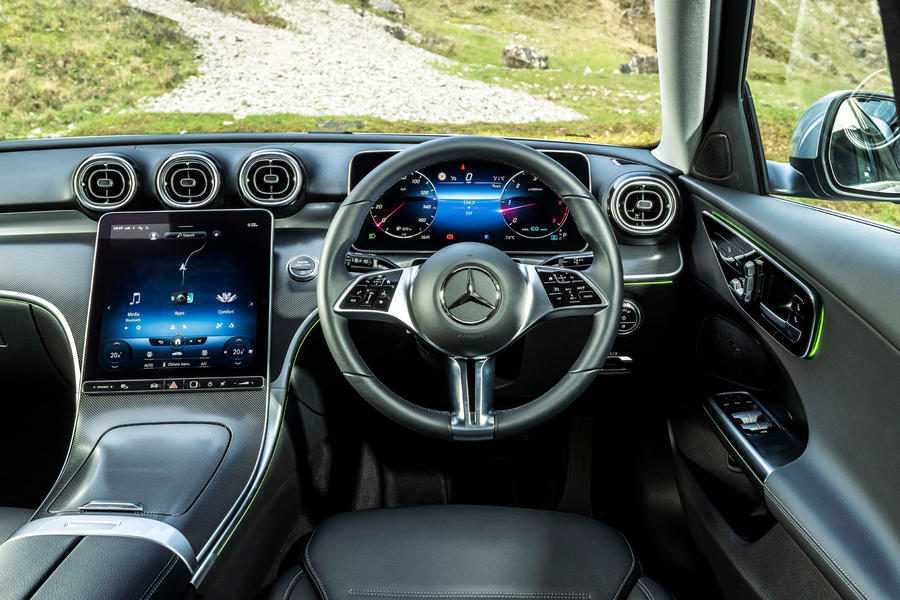 The C-Class must be far from the top of Stuttgart’s priority these days, when it’s investing a frankly incomprehensible sum of €60 billion into going fully electric between now and 2026, yet the engineers have still managed to make tangible progress between generations here.

I wouldn’t mind betting that this is one of the very last new Mercedes models that we Brits will be able to buy with a diesel engine, yet it still feels like development is apace, with the new C220d powertrain doing much to advertise itself to time-poor and long-distance drivers. 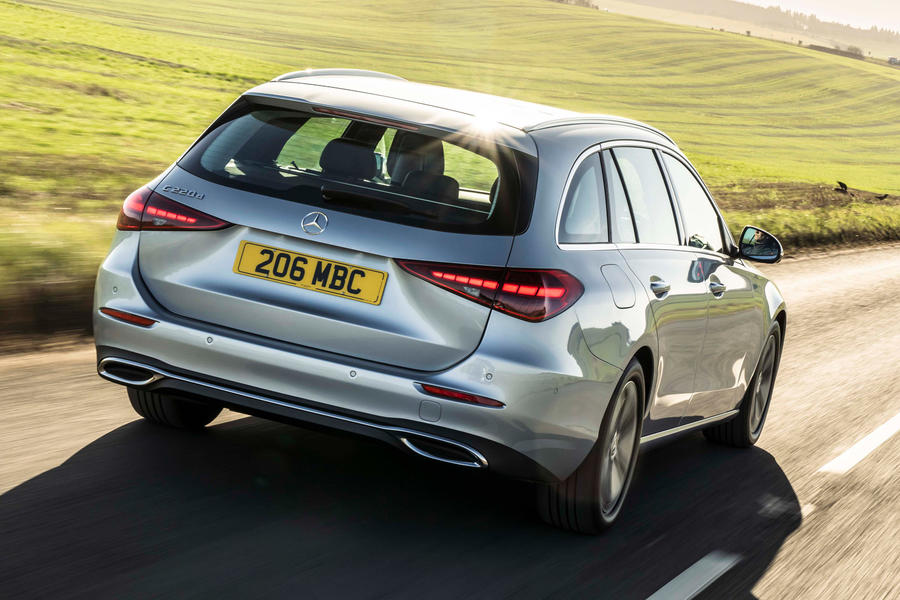 Why do car makers think that ambient lighting is something we need? I can never seem to get a car dark enough inside at night.

At the top of the review Autocar state 'From £29,035'    Wheras in the specification panel the price is given as £42,150.   What Car quote a price (with discount) for the cheapest version of c.£38k.  I wonder if the Autocar person employed to research the 'Price From' numbers, was sent home pre pandemic with a stack of old printed price lists.  I'd like a 44% discount on this, it seems a good estate, and preferable to all the SUV's.

Yes it is annoying ,I have seen some  CARS saying starts at 22k and find it hard to see one for under  £35K  WONDER IF THEY MAKE IT UP SOMETIMES