From £29,0358
Can the all-new, all-electrified sixth-generation C-Class surpass its big-selling predecessor and its old enemy, the BMW 3 Series?
Open gallery
Close

Company officials appear nervous when a group of journalists arrive at Mercedes-Benz’s expansive Immendingen test facility in southern Germany to drive the new Mk5 C-Class for the first time. This is how it has always been when a fresh incarnation of the BMW 3 Series rival has appeared down the years – and with good reason.

Since its introduction in 1993, the C-Class has garnered a total of 8.6 million sales worldwide, including 2.5 million sales of the Mk4 model, which was introduced back in 2014. A good deal of Mercedes’ growth and profitability over the past three decades can therefore be traced to its success. So, the new model (codenamed the W205) clearly has a whole lot to live up to.

This time around, however, the odds of repeated success appear less certain than ever. Not because of any fundamental weakness in the C-Class itself – far from it, in fact. But with the paradigm shift currently being experienced in every corner of the car industry as governments around the world work to impose measures that favour electric cars, traditional ICE favourites suddenly find themselves under increased pressure.

Having made a big step with the Mk4 C-Class, this new one represents more of an evolutionary change than a new start. It retains the same basic building blocks as its hugely successful predecessor – although pretty much every component has been altered to boost its appeal and thus keep those sales ticking over.

And to make regulators happy and appease environmentalist groups, it also adopts electrified technology across the range. The C-Class has influence beyond its initial saloon and estate variants: it also forms the basis of the second- generation GLC SUV, which is due in 2022 in both conventional and coupé-esque forms. That’s a big deal.

In a move that harks back to the Mk1 C-Class, Mercedes has provided the new model with closer styling links to the latest E-Class and S-Class than more recent iterations as part of a wider effort to imbue its line-up with a more cohesive styling lineage.

This is evident in the shape of elements such as its front grille, headlights, ‘power domes’ on the bonnet and horizontally positioned tail-lights, which now extend into the boot lid to give the C-Class greater perceived width.

It also keeps its cab-rearward profile, six-window glasshouse, largely unadorned flanks and overall stance – all closely modelled on those of its larger siblings to give it a sleek drag coefficient of 0.24.

For the first time, Mercedes is launching a new C-Class saloon and estate at the same time: the usual six-month wait for the latter has been eradicated through improvements in production-line efficiency. Two-door coupé and cabriolet variants will follow, although not before 2023. 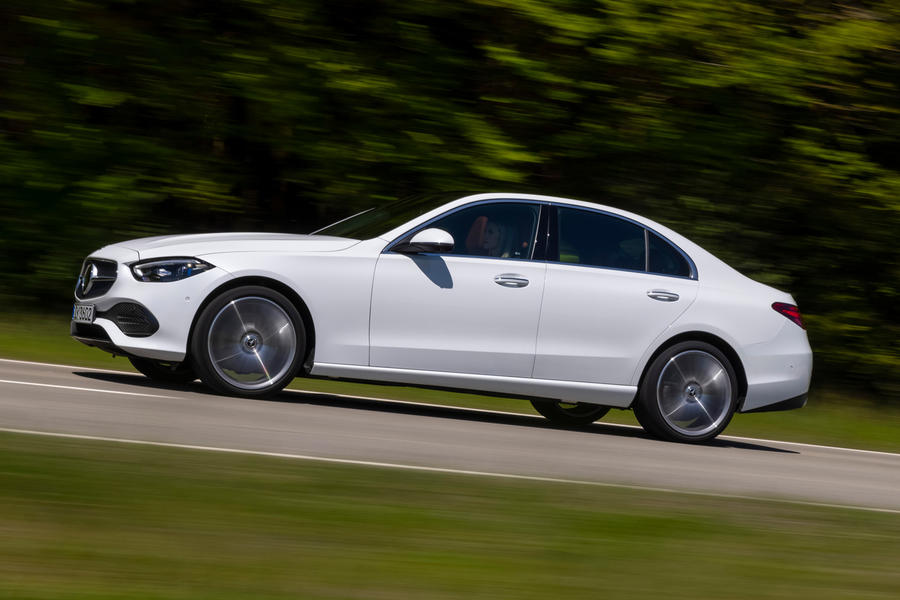 Predictably, the new C-Class has grown. Length is up by 65mm to 4751mm and width is increased by 13mm to 1820mm, although a slightly sleeker roofline has reduced its height by 9mm to 1438mm. All this makes it 63mm longer, 10mm wider and 1mm lower than the Mercedes CLA saloon. It’s also 42mm longer, 7mm narrower and 4mm lower than its closest traditional rival, the 3 Series.

The increase in length is allied to a longer wheelbase, which has grown by 25mm to 2865mm. The added width, meanwhile, has brought with it the adoption of wider tracks. The front is up by 19mm to 1583mm, while the rear is extended by 48mm to 1594mm, with the effect that the wheels (ranging from a standard 17in to an optional 20in) now sit further outboard within the wheelhouses.

Underpinning the new C-Class is a reworking of the Mk4 model’s Modular Rear Architecture (MRA) platform. Mercedes won’t go into specifics here, saying only that suspension design is similar, with double wishbones up front and a multi-link arrangement at the rear; and, in combination with the wider tracks, the springs, dampers and anti-roll bars have been retuned.

Buyers can continue to specify adaptive dampers as a paid extra. There’s no option of air suspension at the rear any more but, in an attempt to increase low-speed manoeuvrability while introducing greater stability at higher speeds, the new C-Class offers all-wheel steering for the first time. This enables the rear wheels to turn at up to 2.5deg in a bid to project it beyond the 3 Series for outright driver appeal.

Inside the new C-Class, you find the same contemporary look as in the latest S-Class. It makes a very strong impression when you step inside and set your backside on the newly styled front seats, with a mix of materials and expanse of fibre-optic lighting that make it feel even more special than the more expensive E-Class.

The driving position is ergonomically pleasing, with plenty of adjustment for the seat and the newly styled steering wheel, which features touch-sensitive controls in its horizontal spokes on higher- end models. Visibility is good, if not great. Mind you, there’s an armada of sensors and cameras to keep tabs during parking and the like.

Depending on the model and trim level, you get a 10.25in or 12.3in digital dial display, together with a portrait-oriented touchscreen measuring 9.5in or 11.9in across.

Many of the controls have been incorporated into the latter, including those for the air conditioning, leaving very few physical buttons. It’s all operated by the latest iteration of Mercedes’ MBUX system, which offers conversational speech control for most functions and whose software can be updated wirelessly. Key among the technology options is a new augmented reality head-up display. Similar to that offered on the S-Class, it projects important information as a 29.5in image on the windscreen at a virtual depth of around 4.5 metres.

As before, gear selection is via a so-called direct-shift stalk mounted on the steering column, freeing up space on the centre console for a large oddment bin. It incorporates a pair of drink holders as well as a USB-C port, with a wireless phone charging pad available as an option. Manual shifting can be done via steering wheel-mounted paddles. 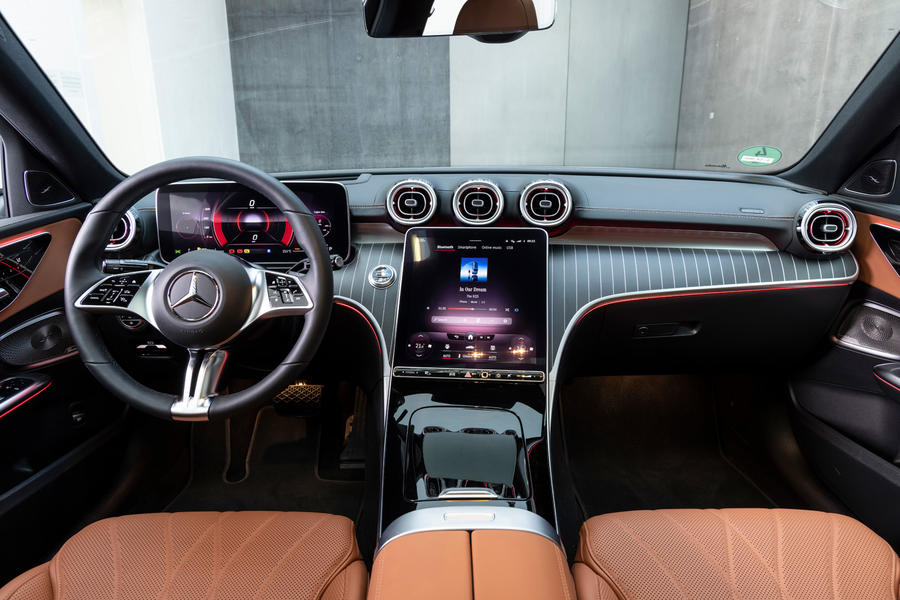 The cabin is cleverly packaged, increasing in accommodation all round, most notably in the rear, where the C-Class now offers 21mm more leg room, 22mm more elbow room and 13mm more shoulder room.

It’s rather disappointing in load-carrying capability, though: despite the increase in length, the saloon retains a boot capacity of 455 litres – 15 litres fewer than offered by the smaller CLA and 25 litres fewer than the 3 Series.

Buyers will be able to choose from two turbocharged four-cylinder petrol engines and a single four- cylinder diesel engine in various states of tune across six trim levels when deliveries begin in September.

Five models (the C180, C200, C300, C220d and C300d) feature 48V mild-hybrid technology, with an added 20bhp provided by the alternator under acceleration and a coasting function that idles the engine on a trailing throttle for added energy recovery. The C300e is a full plug-in hybrid with an EV range put at between 55.3 and 68.4 miles on the WLTP test.

On the petrol side, the 1.5-litre C180 and C200 produce 168bhp and 201bhp respectively. They’re joined from the outset by the C300, which runs a 2.0-litre engine with 254bhp. The same powerplant is used by the C300e in combination with an electric motor, albeit detuned to 201bhp to form part of a combined petrol-electric output of 308bhp.

It’s the C220d we’re driving here. Traditionally a big seller in the UK, its updated engine is terrifically well suited to the new C-Class’s broadened brief, proving that a diesel can still hold wide appeal in the executive saloon ranks.

With an extra 29lb ft providing it with 324lb ft of torque between 1800rpm and 2800rpm, it’s relaxed around town and quite urgent out on the open road. It’s also commendably refined, with relatively smooth and hushed qualities up to and beyond middling revs.

The increase in power and torque may be subtle, but the new entry-level diesel hauls with added enthusiasm, as ref lected in its 0-62mph time of 7.3sec and top speed of 152mph.

The outstanding action of the C220d’s gearbox helps matters, it shifting crisply and smoothly at all times. And this driveline precision is reflected in the handling, which takes on a more responsive nature than ever before. It all starts with the steering, which is both well weighted and, thanks to the adoption of an altered ratio, more eager in its action.

The optional all-wheel steering system will appeal to enthusiast drivers, providing a clear lift in agility. It’s probably less suited to the relaxed qualities of the C220d than other new C-Class variants, but it’s still well worth consideration for those who do a lot of urban driving, solely on its ability to provide a 43cm reduction in the turning circle (down to 10.64 metres) for greater low-speed manoeuvrability and ease of parking.

The ability of the suspension to soak up surface irregularities, unobtrusively handle bumps and authoritatively deal with changes of camber helps to provide the new C-Class with a wonderfully flowing nature. It’s tremendously easy to place on the road, aiming directly where you point it, and there’s great balance to its actions.

It also has very impressive levels of grip, yet, as proved by an extended drive in the rolling hills an hour or so south of Stuttgart, it’s the body control that really stands out. The C-Class remains super-composed when you run it hard up to the apex of a corner, with roll building in a clearly defined manner, while the chassis provides a clear picture of where the limits of adhesion are set.

As highly as we rate the 320d for driving dynamics, the C220d surely runs it close. It will be a fascinating test when we get the two together.

It’s clear already, though, that this new Mercedes pips its BMW rival for ride quality, at least when specified with the optional adaptive damping control, as our test car was. This gives it a great spread in character, providing it with a truly cosseting feel in Comfort driving mode and clearly more athletic traits in Sport. 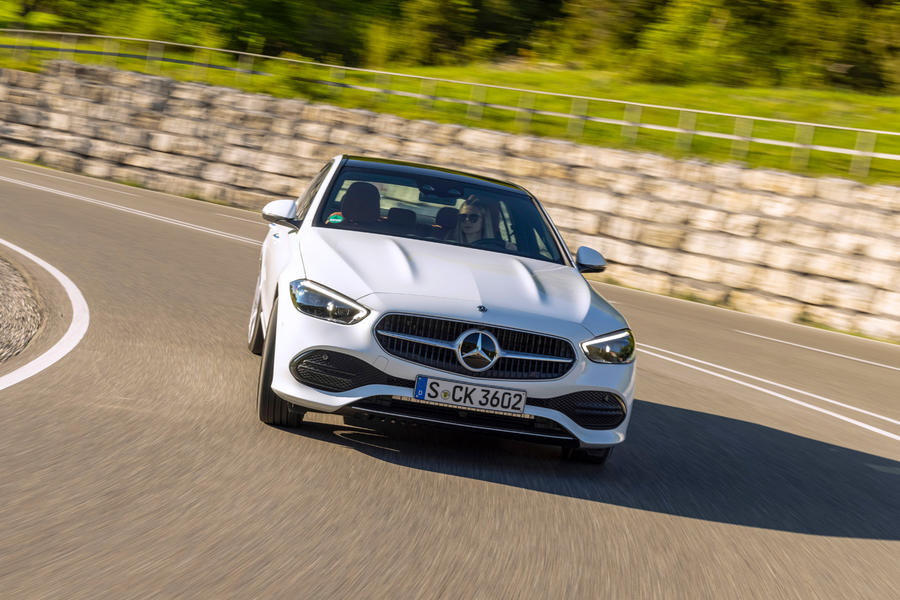 We’re going to need a lot more time in the new C-Class to fully judge its performance and new-found sportiness, but what is evident from our first taste is that it’s clearly right back into the reckoning.

In volume-selling C220d guise, it remains a tremendously well-rounded proposition, with outstanding levels of comfort, refinement and quality. However, these traditional traits now come with an ability to engage, connect and even excite the driver.

This is a wonderfully complete car that will no doubt appeal to a wide range of customers. 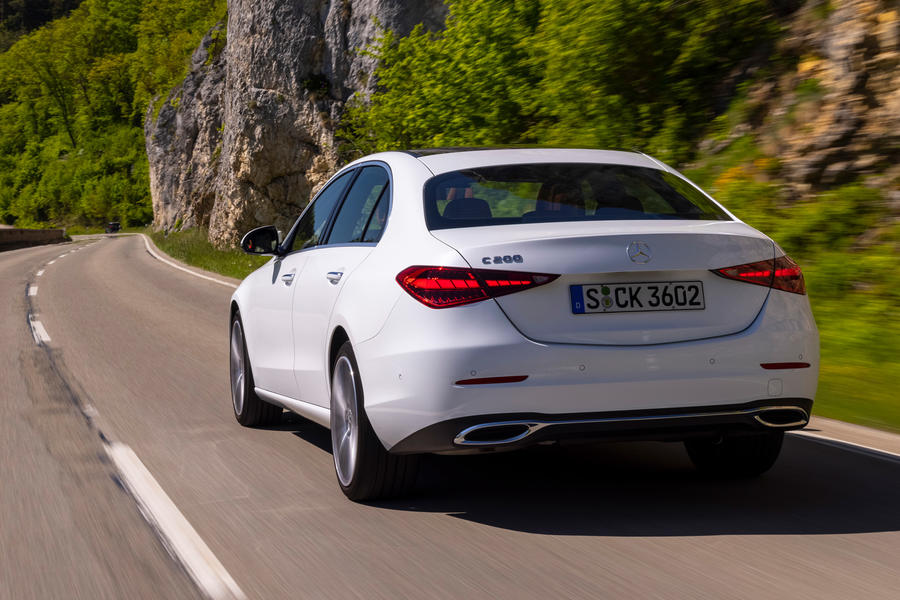 I have bought one already.

Unfortunately, despite the ride being good on a smooth motorway or A road, the ride is abysmally rough and awful on an average city street. You get shaken around no end, and there are crashing noises. All the shills and sycophants are praising the new c class. Don't be fooled.No air suspension means you will have awful journies.

Let's all pause a moment .... to reflect on the final sad passing, confirmed here, of the Instrument Binnacle.

Their demise has been completed.

Bland outside and Vile inside, what happened to tasteful Mercedes interiors led lights shiney plastics trying to look like metal and those pin stripes and the cheap looking graphics on the plethera of screens  what next a mirrored roof lining and a pole.... to hold onto of course :) It will appeal to those with no taste and more interest in the badge than the way it drives.