9
New four-door, four-wheel-drive GT 63 may be a confusing car to contemplate, but it’s a deeply impressive one to drive
Open gallery
Close

The Mercedes-AMG GT 4-Door Coupé is Mercedes’ in-house performance arm 'pulling a fast one' in more ways than one. It is a five-metre, four-seater, four-door performance GT not unlike the Audi RS7 Sportback or Porsche Panamera – and as such, being a proper Affalterbach-only production rather than another tuned Mercedes-Benz CLS, a big deal for AMG.

But the Panamera, for example, has always had its own fully distinct model identity: even though it looks a bit like a supersized Porsche 911, it wasn’t called a 911 GT. And even though it likes to think that every new car it launches these days can be made to look a bit like its ’80s four-wheel-drive icon, Audi won’t rechristen the next RS7 the 'Quattro Touring'. BMW won’t hint that its next M8 Gran Coupé is a proper sports car underneath. They just wouldn’t have the brass neck.

So is Mercedes-AMG setting us all up for disappointment by deliberately picking an identity for the new ‘GT’ 4-Door Coupé that suggests there is a meaningful technical similarity between this and the other ‘Mercedes-AMG GT’ it currently makes: you know, the two-seater spaceframed sports car?

In one or two ways, perhaps. But overall, however unlikely this may seem, I reckon AMG just about gets away with it; that the GT 4-Door is worthy of it. It may not look like a sports car, either on the spec sheet or in the metal, but it has handling smarts that very few cars of its size and weight can match. 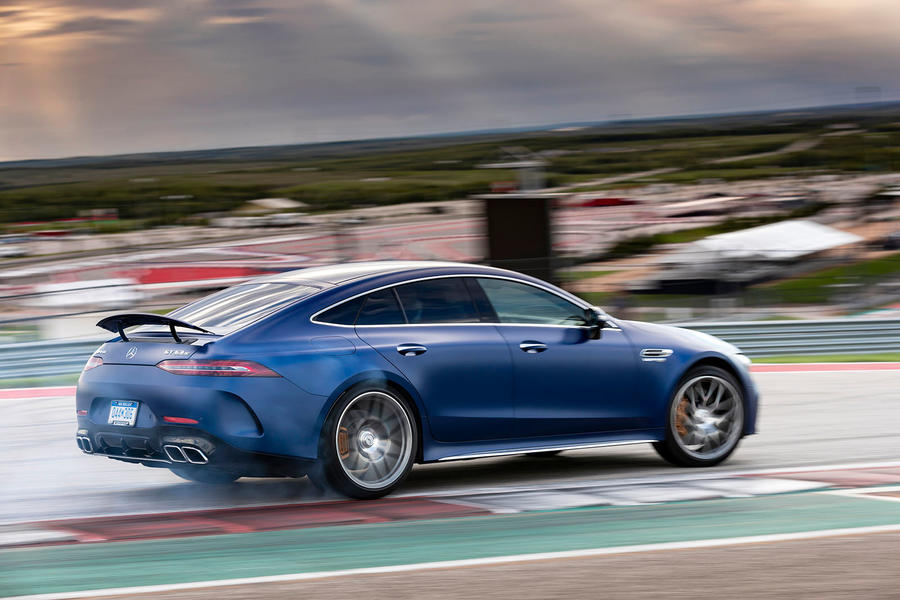 Once you clap eyes on this car, its design quickly betrays the lie that its model nomenclature is covering up. Underneath the GT-alike design details and surfacing language is Mercedes’ ‘MRA’ monocoque passenger-car platform – the same one that’s used for the Mercedes-Benz C-Class, Mercedes-Benz E-Class, CLS and others – rather than the lightweight spaceframe construction that makes the Mercedes-AMG GT sports car handle like it does. The GT’s cabin-rear silhouette and its wide-haunched stance are both notable by their absence. So you’re not left in much doubt, by the time you climb in, that the car you’re about to drive is technically any different from its competition.

You may wonder, to begin with, whether it’s even much different from its closet siblings. Quiz AMG’s engineers about what it is exactly, besides a low, swoopy roofline, that makes the GT 4-Door meaningfully different from a current Mercedes-AMG E 63 and they’ll point first to the 630bhp, 664lb ft twin-turbo V8: an engine equipped with new turbochargers with what Affalterbach has intriguingly christened ‘anti-friction’ bearings. Sounds rather like an innovation of the sort that the space industry might be interested in – though I suspect it’s actually just a bad bit of German translation.

Next, to the local stiffening they’ve carried out to the GT 4-Door’s body-in-white; and there’s plenty of it, mostly between and around the car’s suspension turrets. And then they’ll flag up the four-wheel steering system they’ve fitted here, only thus far applied elsewhere to the GT sports car.

“For me, it’s actually the way the car’s chassis and drivetrain systems interact (4Matic+ four-wheel drive, e-diff, adaptive air suspension, four-wheel steering and electronic stability control) that puts the GT 4-Door on a different level to our performance saloons and coupés,” explains Demian Schaffert, one of AMG’s Driving Dynamics managers (who also says he’s personally done a sub-7min 30sec Nordschleife lap in this car, which is going some).

“The way everything’s networked together is something special; you can tailor the car’s handling precisely as you like it, to your own preference from everything from steering weight and exhaust noise to high-speed stability, cornering stance, throttle adjustability and more. Trust me, this isn’t possible in an E63.” Don’t worry, Demi: we’ll trust anyone who can make two tonnes of metal lap the ’Ring in less than seven-and-a-half minutes. That’s Carrera GT-level pace. 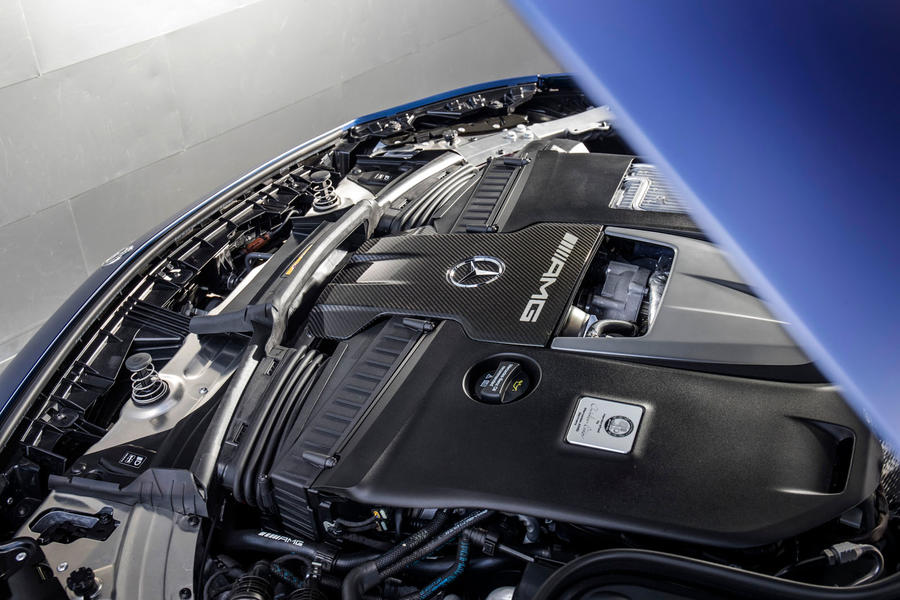 What really matters about this car isn’t anything to do with Nürburgring lap times, of course. All that anyone getting out of an AMG GT will care about is how much easier the GT 4-Door is use. Can grown adults sit in the back seats? Is the boot a proper size? Can I get in and out of the front without slipping a disc? And can it handle a slightly icy roundabout at midnight in February, on my way home from wherever, without frightening me halfway into a Porsche 911 Turbo?

The answers there are all entirely positive. AMG supremo Tobias Moers likes to make bold claims about his cars, but when he says the GT 4-Door has a breath of ability that he thinks is unmatched among four-seater sporting GTs, he is to be believed. Stick the suspension in ‘comfort’ mode and the GT 4-Door rides very nicely but for a bit of low-speed damping bristle. The gearbox is smooth and slick. The sports seats are bolstered – more so than in most performance saloons – but they’re comfy and accommodating. The rear cabin’s big enough for six-foot adults to be pretty at ease in, and the boot’s bigger than you get on most family hatchbacks. It may have more torque than most supercars but this car needn’t come close to scaring you on the road. And, more importantly, it needn’t worry, frustrate, discourage or annoy you with any high-strung histrionics either – which you couldn’t say of an AMG GT.

But that’s all to do with only one end of the car’s broad spectrum of ability – and to explore the other, access to a venue such as Austin’s Circuit of the Americas, where Messrs Hamilton, Vettel, Ricciardo et al will all be headed next month, is a handy thing to have. On the road, because the GT 4-Door is a more dynamically rounded, civilised thing than a GT sports car, it is perhaps a little less exciting than its two-seater ‘relation’. But you’d take that, and you certainly wouldn’t complain: because when you go looking for real excitement in the GT 4-Door, in the most appropriate sort of place, you’ll find it in abundance.

This is a big car with the agility, balance, body control and indulgent adjustability of something much smaller and lighter – but, as we know, it’s not alone in being like that. In terms of outright lateral grip and braking power, it’s great – but not really in a different ballpark than, say, a BMW M5 or a Porsche Panamera Turbo. But even when you’re driving the GT 4-Door flat out and you’re making it corner more neatly and quickly than a two-tonner ought to be able, its dynamic voodoo is perfectly hidden.

There must be all sorts of things going on all the four corners of this car to make it handle so sweetly mid-corner, and to stop from high-speed with such stability: sizeable changes in suspension setting, e-diff setting and drive torque distribution, and polar switching of the car’s four-wheel steering logic. They’re things that AMG’s rivals either have to allow you to perceive, or to mask with over-assistance.

But the GT 4-Door covers its tracks sensationally well. Leave it in four-wheel-drive mode and, though you can drive it as hard or as badly as you like, and be aware that the car must be continually adjusting in so many ways to keep it on line though you just don’t feel it. The steering stays tactile and consistently weighted; its throttle-on handling balance stays just the right side of neutral; its stability control is working away, but you wouldn’t know it; its lateral grip level is constant and dependable; and the damping of that heavy body, as it changes attitude and direction, remains surprisingly natural and effortless. Engage drift mode, meanwhile, and that sense of poise, precision, adjustability and close control steps up again.

Unlike in other big GT cars, you don’t seem to be able to drive the GT 4-Door too hard or too luridly. It’s with you every inch of the way on your journey through initial surprise, through intrigued exploration, and into delighted exuberance. And it stays right there with you, communicating the bounds of its remarkable limits better than most cars of its type, and keeping its poise and benign controllability considerably better than even a GT sports car manages. 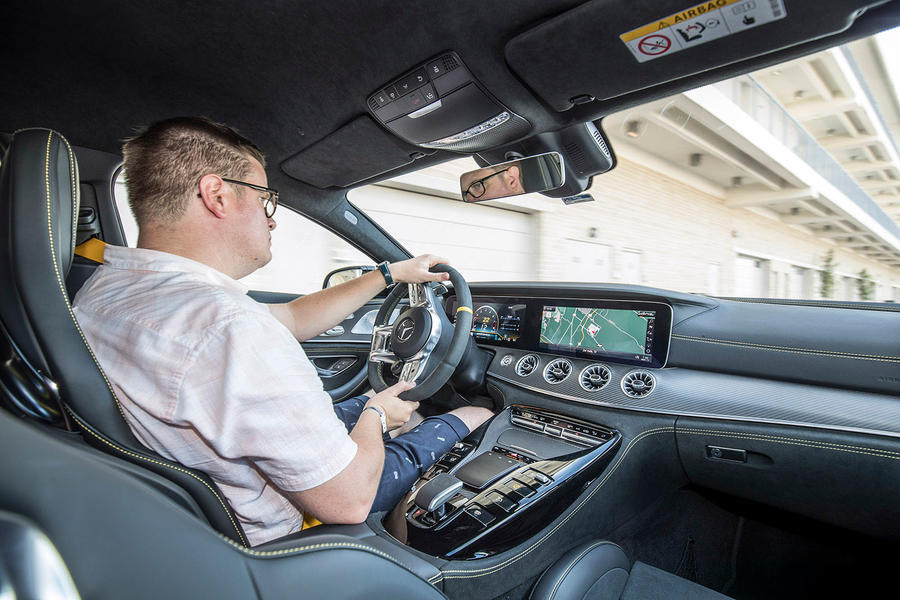 If you’re anything like me, although you might start your acquaintance somewhat bothered and baffled by the idea of the GT 4-Door, you’ll eventually become convinced by its dynamic execution. Or to put it another way, while you might not like what the car is, when you really get to know its range of capabilities you’ll love what it does.

It may be big and heavy, but it goes, stops and handles like something much lighter, leaner, lower and smaller. It may be four-wheel drive, but it can manage and marshal its driven axles more cleverly than most. It may be pretty dull to look at next to a two-door Mercedes-AMG GT, but it’ll be a damn sight easier to live with. And it may have a slightly disingenuous and misconceived model identity, but I’d challenge anyone who owns one to really care. 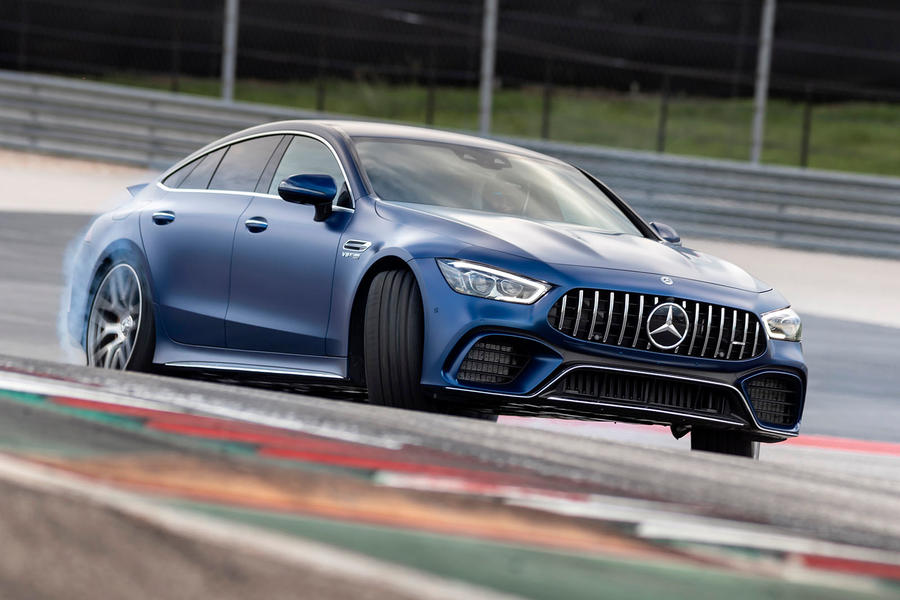 About as close to invoking intellectual property rights by Porsche as Mercedes has managed so far. That rear end is way too close to the Panamera's...

I think it looks quite nice,

I think it looks quite nice, but it is intensely expensive.

I detest these tablet-style fake instrument binacles and wouldn't buy a car with one.  It is as silly as Rolex suddenly decideding that digital is the way forward after all.

And I loathe the 'tailor the car's handling precisely as you like it' thing.  I am not a chassis engineer.  What can I possibly bring to the party that someone with skills in the art honed over a lifetime - someone like Matt Becker - can't do far far better?

I just did a side-by-side of

I just did a side-by-side of the view from the driver's seat in this car and in the A series.  For your extra £100,000+ you get an extra turbine thing, a fast-becoming-a-cliché little ring on the steering wheel at 12 o'clock and, er...