From £53,4056
Mercedes-AMG's lairy small crossover has been given numerous garish yellow details, but it doesn't stop the GLA 45 being a respectable performance machine
Open gallery
Close

Mercedes-AMG has updated its GLA 45 range as part of a mid-life refresh for the hot crossover.

This, the Yellow Night Edition, is the new range-topping model. Like the rest of the range, it wears a new front apron, new chrome front splitter and more aggressive rear diffuser. Additionally, the rear wing has been adjusted, with AMG claiming that the aero tweaks combine to reduce drag without hampering downforce.

Added to the Yellow Night are desirable features including an AMG steering wheel and AMG sports seats that are fitted as standard. What sets it apart from its ilk, however, is yellow trim that’s strewn around the rims of its 20in wheels – which are an inch bigger than standard - along the rear bumper and sides of the rear wing.

Inside, there’s an 8.0in dash-top infotainment screen as standard, complete with Apple CarPlay and Android Auto technology, controllable via a rotary dial on top of the transmission tunnel. The Yellow Night gets a Harman Kardon sound system as standard, too, as well as yellow trim around the vents and yellow stitching to match its exterior theme.

There are no mechanical changes for the latest GLA 45, so peak output from the turbocharged 2.0-litre up front - which is still the world’s most powerful production four-cylinder, by the way - remains 375bhp and 350lb ft. The former is available at 6000rpm while torque peaks between 2250 and 2500rpm. 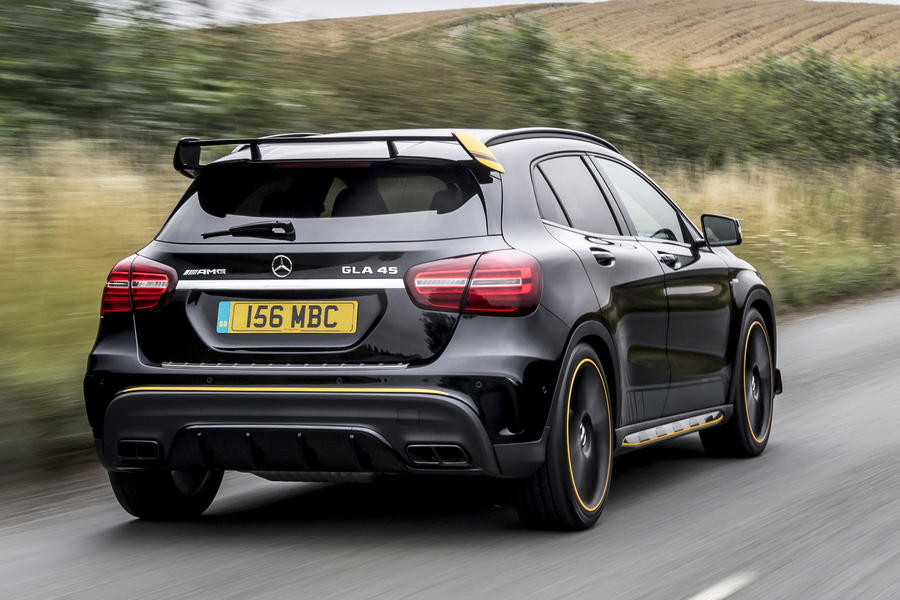 Marmite, because the yellow flashes added to this range-topping variant will be a love/hate thing for many. Those who prefer discreetness are likely to be unimpressed by its brashness, but those who love to celebrate the madness of today’s compact performance cars may see the fun side of the theme.

The Yellow Night’s standard-fit AMG sports seats and AMG steering wheel make the cabin feel like a significantly more serious place to sit. The wheel’s thick, soft Alcantara-wrapped rim and yellow centre line feels just right in a car with this much poke. Only the button-strewn dashboard spoils the party, as it looks dated and cluttered.

Despite being no quicker than the pre-update car, the latest GLA 45 feels every bit as fast as it did when the model was launched. The car’s 4Matic all-wheel-drive system, which runs in front-wheel drive for most of the time before sending up to 50% of torque rearwards when it's needed, provides ample traction, meaning off-the-line launches are savage.

0-62mph is knocked off in 4.4sec and the engine feels no less urgent beyond that, with the car’s seven-speed dual-clutch automatic supremely quick at swapping cogs and satisfyingly responsive when controlled by the steering wheel-mounted shift paddles. Our car features the £510 option of an AMG performance exhaust, which pops, crackles and burbles as the engine spins through its rev band, as well as the AMG driver’s pack, which removes the 155mph limiter.

Rein things in and the GLA 45 will offer 38.2mpg, a respectable figure for a car with such snappy performance. The car rides nicely, too, with noticeably more pliancy from the suspension than in the technically similar AMG A45 hatchback. The GLA 45 rides 15mm lower than the regular GLA, but it's still 40mm higher than the low-set A45.

This raised position does make the GLA 45 a less sharp offering, but the body never rolls or pitches like you might expect an SUV to, especially when fitted with the optional (£1395) AMG dynamic plus pack. This adds AMG ride control sports suspension, which helps the car remain flat and composed over bumpy sections of road, as well as a traction-boosting front locking differential. Point to point pace with this set-up is superb and the car’s willingness to be hustled makes it extremely fun to thread along a B-road.

Its character actually feels far more like that of a slightly raised hatchback than of a proper SUV. The GLA 45 doesn’t offer such a commanding view of the road as a Porsche Macan and the cabin doesn’t feel quite as large as you’d expect for a car in this segment.

However, the GLA 45 claws back an advantage in the way it can morph into something that feels far more focused than the Macan because of this crossover, as opposed to SUV, stance. 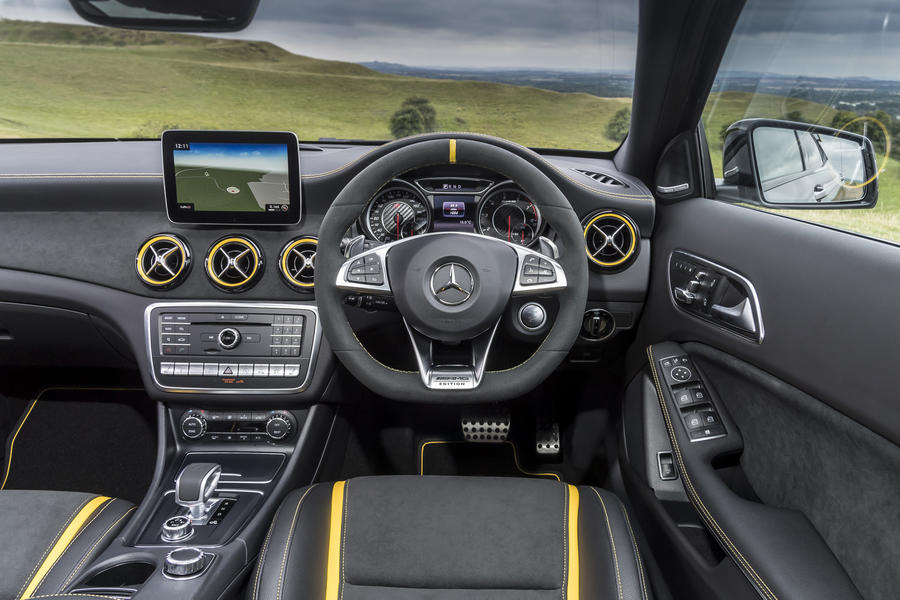 There’s no doubt that the updated GLA 45 is as competent a driving machine as ever and its minor cabin-based niggles will be easily overlooked by those who want a good-riding, extremely fast performance crossover.

However, it’s hard to recommend the Yellow Night Edition tested here because of its higher price – it's £6485 more than a regular GLA 45 – and more divisive image. For most, the regular GLA 45, with its equal point-to-point pace and more conservative look, will be the more attractive option. 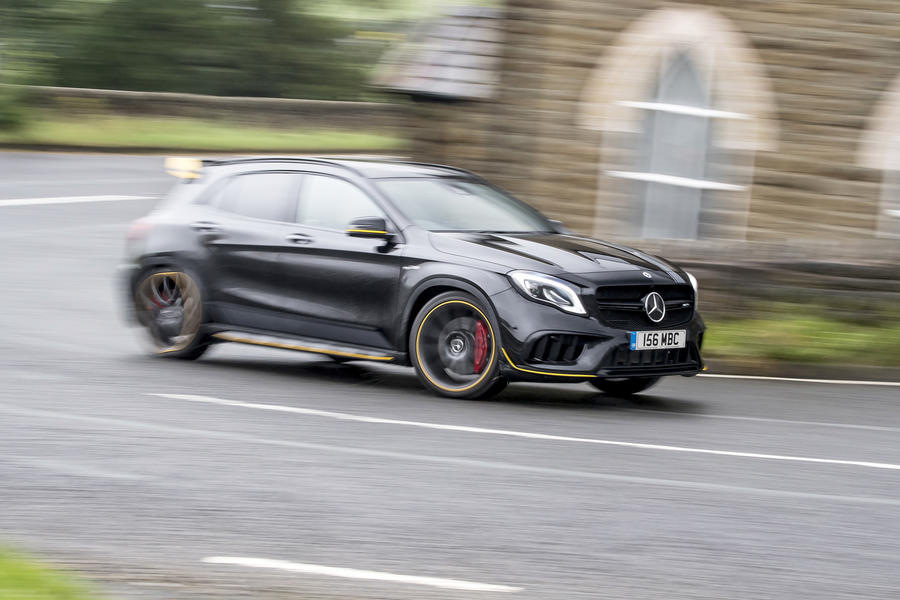 Its quite expensive. But i know how rear getting one of this.
Answerexpo 31 October 2017

I much prefered my A200 with 'Mercedes offical messing about'...than an A45 loan car, you could feel the 4x4 weight and it wasnt that fast. But Mercedes did offocially mess about with my A200 when i complained it was sluggish....they would never tell me what they did but im guessing engine map and gearbox shift pattern. I bet the next owner got a shock nd thought all A200 where is good lol

A slow A45? Never heard that