From £26,6958
An unconventional sort of family SUV but a likeable one for its simplicity, zestiness and handling precision
Open gallery
Close

The latest, revised version of Mazda’s biggest SUV. It’s the kind of car in which you might not expect to find a petrol engine offered at all – let alone a normally aspirated one, given a market where the vast majority of all combustion engines are now turbocharged. And yet, because Mazda is Mazda, it likes to do things according to its own particular philosophy. So more or less the same 2.0-litre atmospheric Skyactiv-G engine as once powered the MX-5 roadster can be had in the Tiguan-rivalling CX-5.

That means you won’t find the firm’s new variable compression-ratio Skyactiv-X petrol motor here, which makes slightly more power and torque for the smaller and lighter Mazda 3 hatchback and the CX-30 crossover than this CX-5 gets. For reasons best known to Mazda, the CX-5 continues with the older petrol lump, although it has gained an active cylinder shutdown system, which delivers an 8% saving on like-for-like WLTP-certified, lab test CO2 emissions.

If you do still prefer diesel power in your compact SUV, the CX-5 also comes with Mazda’s 2.2-litre diesel in a choice of 148bhp and 181bhp tunes. The higher-powered diesel is now the only CX-5 available with four-wheel drive, but you can choose between a six-speed manual or automatic transmission with every engine in the range. 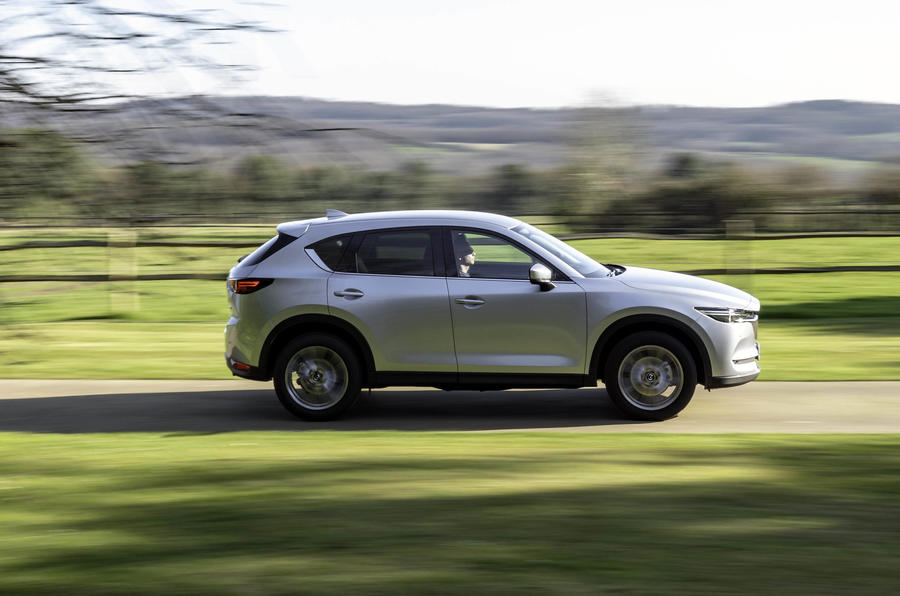 The CX-5 remains a likeable sugared pill of a compact SUV. It's not the most easy-to-drive car of its breed, sure; rather, the sort of SUV you might pick having only reluctantly admitted that you could do with the space and versatility such a car affords, while also being not ready to give up being an interested and involved driver just yet.

That’s particularly true if you go for the petrol version, which revs pretty sweetly and needs to be worked fairly hard to make the car accelerate with much urgency; and which, thankfully, has the slick, precise control weights and crisp handling responses to reward the investment of effort. If you like your SUVs torquey and effortless, this probably isn’t the car for you.

Likewise, if you bank on beating 50mpg to make your monthly fuel bills add up, it won’t work for you, either. Even with the new cylinder shutdown system, this car returns only 45mpg on a typical motorway cruise. It would probably average something between 35mpg and 40mpg in mixed short- and long-range use. That’s not bad fuel efficiency, mind you, and if you’ve got predominantly short-hop use in mind, it won’t be a lot worse than you’d get from a like-for-like diesel anyway. If you value the relative simplicity associated with owning and running a petrol engine compared with a modern diesel (of not needing to bother with AdBlue top-ups, and not worrying about turbo or particulate trip problems), a real-world 40mpg from a car like this will probably do you nicely.

On the inside, the CX-5 offers a pretty typical amount of both passenger room and boot space for a compact SUV or a bigger crossover hatchback; a little bit more than, say, a Volvo XC40, but not as much as a Skoda Kodiaq or Honda CR-V. Back seats with adjustable backrests and 40:20:40 split-folding functionality are very welcome, as is the fold-down centre armrest, which provides not only cupholders but also USB power sockets.

Our mid-spec Sport-trim car comes with leather upholstery as standard and a generous amount of active safety kit. The cabin’s a little bit monotone, but the chrome-effect garnish on the switchgear and air vents makes for an understated sense of ambient quality that suits the car well and makes it a pleasant place in which to spend time.

The infotainment system has been refined, now having a larger usable screen. It’ll be favoured by some because it retains a rotary input knob, along with some shortcut keys, down on the transmission tunnel, so you don’t have to prod it with your finger and cover the display screen in grease if you don’t want to. Unfortunately, it’s not the most responsive, intuitive-to-use or crisp-looking system, but it does at least offer smartphone mirroring for both Apple and Android as standard, so you can add your own music streaming and web-networked functionality pretty easily.

Mazda has been incrementally chipping away at refining this CX-5's ride and handling since its introduction three years ago. Although the car’s dynamics were pretty well received back in 2017, Mazda reappraised them for last year’s version of the car, re-rating its anti-roll bars, dampers and suspension bushings. It also added its latest active torque vectoring software to the car last year – something called G-Vectoring Control Plus – which uses both combustion control and braking intervention to subtly manipulate the loading of the car’s contact patches to the alleged improvement of both body control and handling precision. For this model year, it has left well enough alone, electing only to seek to improve cabin sealing and engine isolation with a handful of new refinement measures.

If the car is constantly juggling and adjusting your throttle and braking inputs, you’re certainly not aware it’s doing so. The CX-5 remains a very agreeable car to drive. It’s slightly tauter in its body control, meatier feeling through its controls and crisper and more linear in its responses than the average small SUV. It doesn’t smother bumps in the road quite as effectively as some and is guilty of tripping somewhat clumsily over the odd sharp edge or sunken drain in the road. Nevertheless, it remains more than quiet and comfortable enough to fit in with family life. 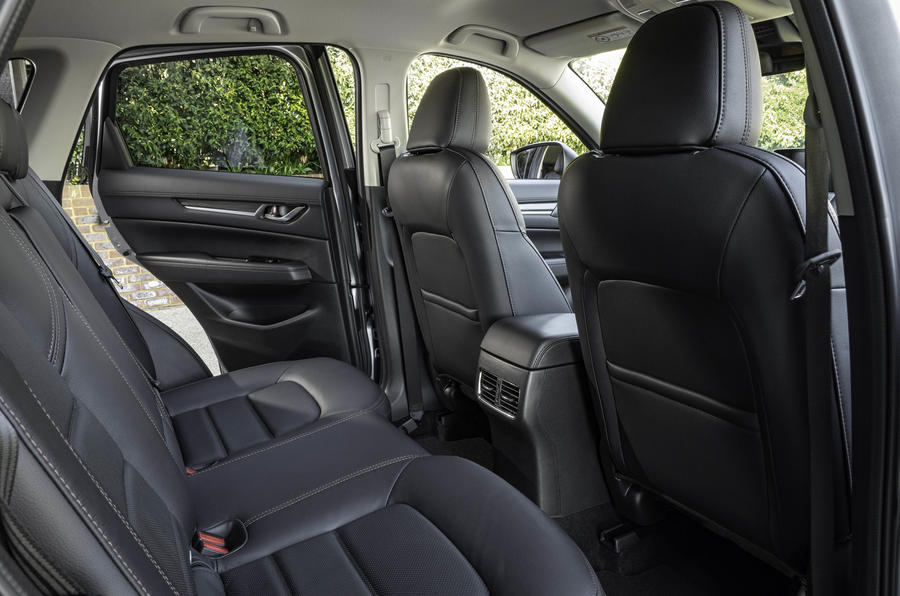 With the new Ford Kuga recently come to steal its sporty thunder, and one or two other smarter-handling customers around in its segment than existed three years ago, the CX-5 probably isn’t the very first smallish SUV a keen driver would test drive any more; but it deserves considering nevertheless. The same complimentary senses of relative lightness and compactness, crispness, precision and simplicity that have always characterised its driving experience continue to serve as great adverts for it – while the rest of the car’s package, from pricing to practicality, looks competitive. 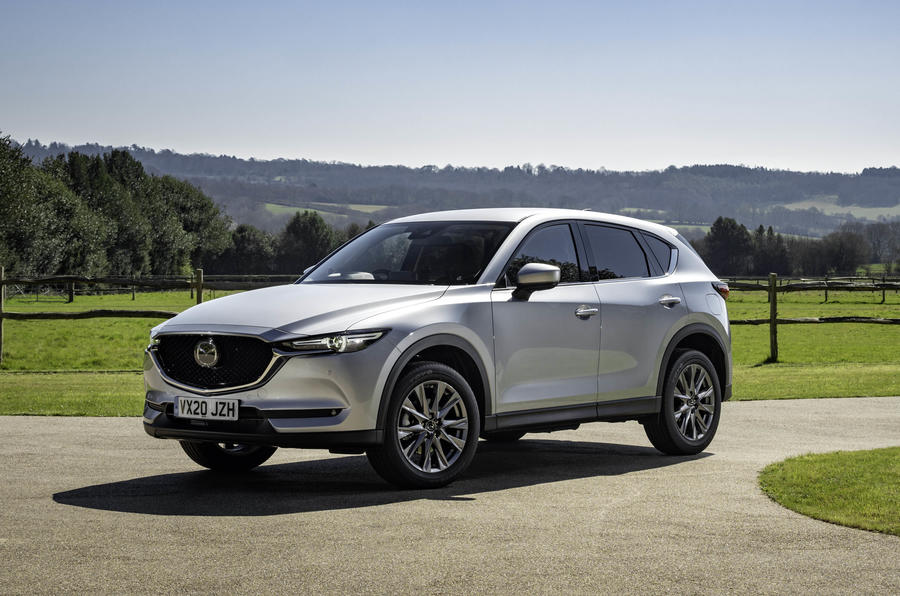 Almost since its uk introduction the petrol powered CX5 has been criticised for its lack of power hauling the relatively large body of the CX5 (even more sluggish with the auto box). Mazda addresssed this criticism for most markets by introducing the 2.5 litre turbo (USA, Australia, New Zealand etc) However Mazda UK obviously thought no one was interested in a petrol Auto CX5. Obviously everyone in the UK demanded diesel. Right ? Wrong! I and I know a few others do NOT want diesel anymore. Why put up with vibration, particulate filter problems, adblue oh and oil dilution (Check out customer issues on this) Mazda UK were even slow in introducing the automatic gearbox for the petrol CX5. Wake up MAzda UK.

Really I am very glad to read this interesting post, thanks author

I have a 2014 1.8 Civic and looked at replacing it with a previous generation 2.0 Mazda 3. The Civic has more power (142bhp v 120bhp) but the Mazda has more torque (129lb/ft v 155lb/ft)  so I expected similar performance on the road. However, the Mazda just felt sluggish, like I was disconnected from the engine and the extra torque was hampered by longer gear ratios, especially in sixth. It felt much slower than my Civic in any situation. If that experience is repeated in the CX5 I can understand the comments from the posters above. I wonder if the 2.5 N/A engine offered elsewhere would actually deliver similar real world economy as this 2.0 but better performance. Alas our CO2 rules will put pay to us ever getting it.