From £21,8308
Share review
By making a petrol work more like a diesel, can the Mazda 3 Skyactiv-X show there’s still life in the internal combustion engine?
Share
Open gallery
Close

This may look like a humble, if rather stylish hatchback, but there’s more to the Mazda 3 Skyactiv-X than meets the eye. Look under its bonnet and you’ll see, well, an awful lot of plastic actually. That’s because its 2.0-litre four-cylinder petrol engine is enclosed in a ‘capsule’ to promote a faster warm-up that improves efficiency.

But that’s just the tip of the iceberg, the really clever stuff involves what Mazda calls SPCCI or spark controlled compression ignition. Under light loads, a very lean fuel and air mixture is pushed into the cylinder under a diesel-like 16.3:1 compression ratio on the intake stroke. As the piston squishes everything, a small amount of a richer mixture is squirted near to the spark plug. Igniting this instantly raises pressure so the leaner mixture also ignites, burning cleaner and more efficiently. However, put your foot down and it operates like a regular petrol engine, at least, that’s the theory.

To further improve efficiency, there’s also a 24v mild hybrid system that uses a combined starter/generator to harvest energy when you’re slowing down. This can then be used to assist the engine when accelerating from a standstill, for instance. The end result is 178bhp without the use of a turbo, emissions from just 100g/km and official fuel economy of 51.4mpg. That’s rather impressive.

Those figures are for the six-speed manual with front wheel drive on 16in wheels. Four-wheel drive and an automatic gearbox are optional, while higher trims receive 18in wheels. Naturally, all these items make the 3 less efficient, with emissions rising to as high as 125g/km. 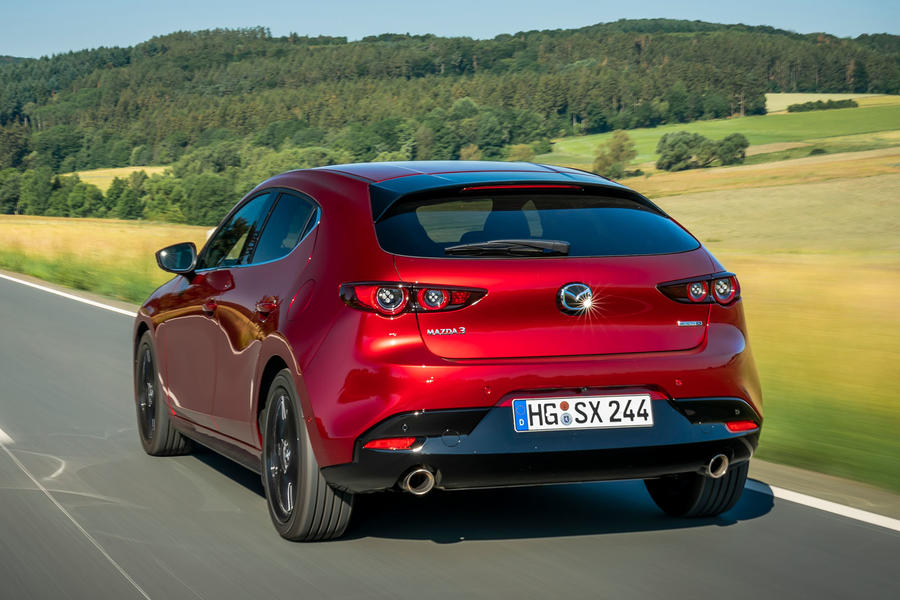 Arguably the most impressive thing about the Skyactiv-X engine is just how normal it feels. Hit the start button and it doesn’t sound or feel any different to the regular petrol engine. However, accelerate past 1500rpm and there is a gritty edge, almost like you're hearing a diesel car next to you accelerating. Push it beyond 4500rpm and bizarrely it goes back to sounding like a slightly gruff petrol engine. It is however much smoother and quieter than diesel and the start stop system works almost imperceptibly.

There might be a diesel edge to some of the soundtrack, but there’s no surge of power from low in the rev range, it feels just like a naturally aspirated petrol engine despite the soundtrack. Rather than peak torque coming in at around 1500rpm as we’ve come to expect from modern turbocharged engines – including petrols – it needs to reach 3000rpm before its modest 165lb ft is unleashed.

Peak power comes at a fairly high 6000rpm although the engine will rev to nearly 7000. As it does start to feel a little breathless at high engine speeds, you won’t be exploring the redline regularly. Even so you’ll still be stirring the six-speed manual gearbox more than in turbocharged rivals, although that’s no hardship. A short, positive and pleasingly mechanical shift makes changing gear an experience to enjoy. Once stoked, performance isn’t bad with 0-62mph taking a reasonable 8.2sec.

Other than that, it’s business as usual for the Mazda 3. The steering is precise with a pleasant weighting that builds predictably with speed and cornering force. It might not be quite as quick as in some rivals, but it allows you to guide the 3 from corner to corner in a satisfying manner.

There’s little body roll even when pressing on, helping it feel agile in quick direction changes. It might not have quite as much front-end bite as a Ford Focus, but it’s still enjoyable to drive within the limits of grip.

This driver appeal does come at the expense of ride comfort. It’s by no means uncomfortable and has far better body control than the Skoda Scala, but you do feel it patter over crumbling road surfaces. That’s partially down to the simple torsion beam rear suspension – there’s no independent rear end, at least for the front-wheel drive cars.

Apart from a screen on the infotainment system that shows how often you're in SPCCI mode (Mazda reckons 80% of the time, a figure we’d be inclined to believe), the interior is no different from any other Mazda 3. We’re not complaining, though, the material quality is truly impressive, feeling distinctly premium.

Not only is there heavy use of soft touch plastic and convincing-looking leatherette, everything feels well screwed together and built to last. That impression is helped by switches, knobs and stalks that work with a pleasing precision.

Infotainment is taken care of by an 8.8in screen mounted high on the dashboard so the driver doesn’t have to look far from the road. It’s controlled by an iDrive-style rotary dial between the seats and impresses with its responsiveness, the quality of its graphics and simplicity of its menus. There are even handy shortcut buttons around the dial, too. Meanwhile, the instruments are partially digital but lack the configurability of Audi’s Virtual Cockpit. A standard head up display makes up for this somewhat, though.

Front seat passengers might be able to stretch out comfortably, but rear leg and head room will be tight for those over six feet tall. Small rear windows and thick rear pillars don’t help this feeling of claustrophobia. Boot space is a little below average, but you can still fit six carry-on suitcases back there. 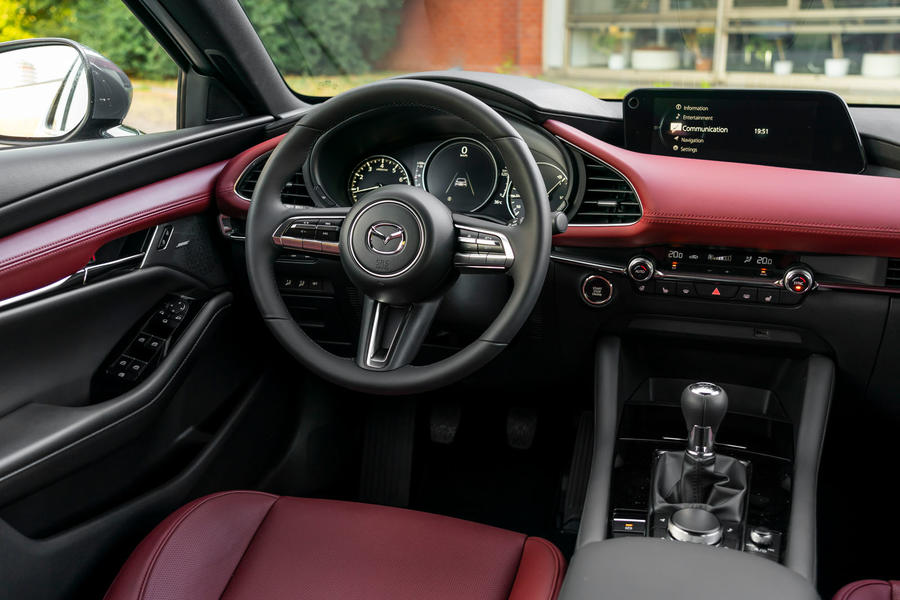 Even with the normal and relatively weedy 2.0-litre petrol and 1.8-litre diesel, the Mazda 3 is a highly recommendable hatch. Unsurprisingly then, with a little more fire in its belly courtesy of the Skyactiv-X engine, there's even more reason to pick one as your next family hatch. Some may bemoan the low torque figure achieved at relatively high revs, but you can't argue with the outright performance and those emissions and economy figures.

Pricing is yet to be released, but early indications suggest it should be slightly cheaper than the diesel and will cost less in BIK tax should you be a company car driver. If that price remains palatable, the Skyactiv-X is the best engine for the 3 unless you’re covering mega-miles, in which case the diesel’s even better economy is hard to ignore. With Mazda already saying there’s more to come from Skyactiv-X, we’ll be keeping a close eye on developments. 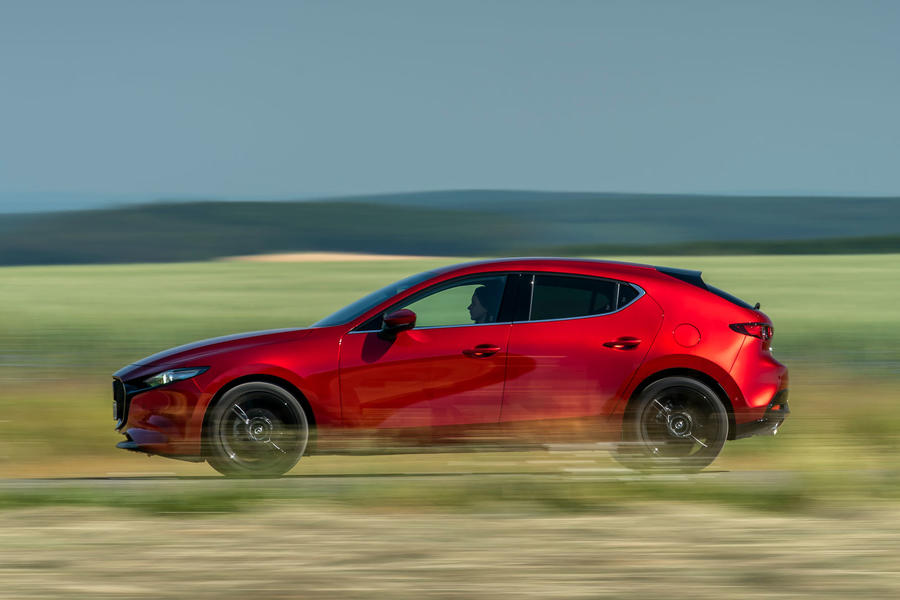 I'm not blaming Mazda for this discrepancy, but I assume that it results from manufacturers being allowed to quote fuel consumption from one test (WLTP) but use a different one (NEDC correlated) for CO2 values.

Nevertheless, it is impressive that Mazda have put this engine into production - and even Autocar's quoted 48.7 mpg figure isn't bad a family hatch with a 180 horsepower petrol engine.

For the final proof though, it would be good to see just how the Mazda compares with its competitors under identical driving conditions.

It doesn't ride well, rear passengers will suffer from claustrophobia, you need rev it which (coupled with it's weight) explains why this mild hybrid uses so much fuel and it'll be expensive. Nah

Mazda are sometimes to be admired but i reckon they're heading down a cul-de-sac here.

In something that weighs 1200kg this might make sense both for improved efficiency and performance, but as it is it appears to be a compromise from the perspective of both with this car weighing what it does, i don't get it.

No mention of the engine using a supercharger, a fairly critical detail Autocar. As for the engine itself, I feel a bit underwhelmed. It doesn't sound like it an especially interesting engine to use even if the technology behind it is unique and the economy figures are fairly unremarkable. Part of the appeal of Mazda's rightsizing approach is its simplicity and effectiveness, but this adds a whole host of extra complexity for not a great deal of gain. It would be really interesting if Autocar could do a detailed real world economy test between the Skyactiv-G, Skyactiv-X and the diesel.

I did think that but I can only presume with so little power and torque it didn't make it into this version.

It does include a supercharger...

... it's not there to increase power, but to provide enough air to allow the engine to work correctly in 'compression' mode and at lower revs.​In regards to real world figures, I'm sure they'll come once the engine is officially on sale.

Based on estimates currently available, I suppose the comparrisons look as follows;

I'm as Mazda always do, they'll improve and further perfect this tech, and I for one am looking forward to seeing how much of a benefit it is in real-world use.  At present, I think it provides a pretty interesting and useful half-way house between a petrol and diesel, which I believe is what they had set out to do.

Sorry, boring afternoon in the office.

It kinda of does improve power and it's delivery, but, at the end of the day those items:

More to go wrong and service

48mpg nothing special from a mild hybrid

180hp and little torque low down from a 2.0 supercharged mild hybrid engine is poor.

It kinda of does improve power and it's delivery, but, at the end of the day those items:

More to go wrong and service

48mpg nothing special from a mild hybrid

180hp and little torque low down from a 2.0 supercharged mild hybrid engine is poor.

It isn't particularly expensive, if it gets 50ish mpg in the real world that's pretty good for a mid size car, and 8.2 seconds is competitive. Being a Mazda, it's unlikely to break down often or be especially pricey to service.

How it drives, feels and performs is surely more important than whether it is or is not 'competitive' against some subjective on paper standards for a given feature set.