From £28,0058
Engine revisions build on the strengths of a very handsome hatchback with a nicely understated dynamic edge. A little pricey, perhaps, but well worth considering
Open gallery
Close

This is Mazda’s handsome family hatchback, the 3, updated for 2021. But for the addition of a standard-fit sunroof on higher trim-level versions, that update is concerned mainly with what’s under the bonnet.

Running Mazda’s innovative switchable Spark-Controlled Compression Ignition system (SPCCI), the more powerful 2.0-litre option was only introduced with the current 3 hatchback in 2019. New pistons and a new intake camshaft, along with recalibrated combustion control and hybrid system control software, have reduced the engine’s compression ratio slightly, but improved both power and torque output, as well as reducing lab-test CO2 by between 5g/km and 11g/km depending on model.

The 3’s model hierarchy remains made up of five derivative tiers, starting with SE-L and ending up with GT Sport Tech. A six-speed automatic gearbox can be had as an alternative to the standard-fit six-speed manual on all but entry-level versions. Also, if you want a four-door saloon body (with a shinier radiator grille) instead of an upper-level e-Skyactiv-X hatchback, you can have one here - and for no extra cost.

For reasons best known to Mazda and uncommunicated to the rest of us, the range-topping all-wheel-drive version of the car that appeared as part of the 2019 offering has now been removed from the showroom range. We tested an upper-middle-trim, higher-output petrol hatchback. 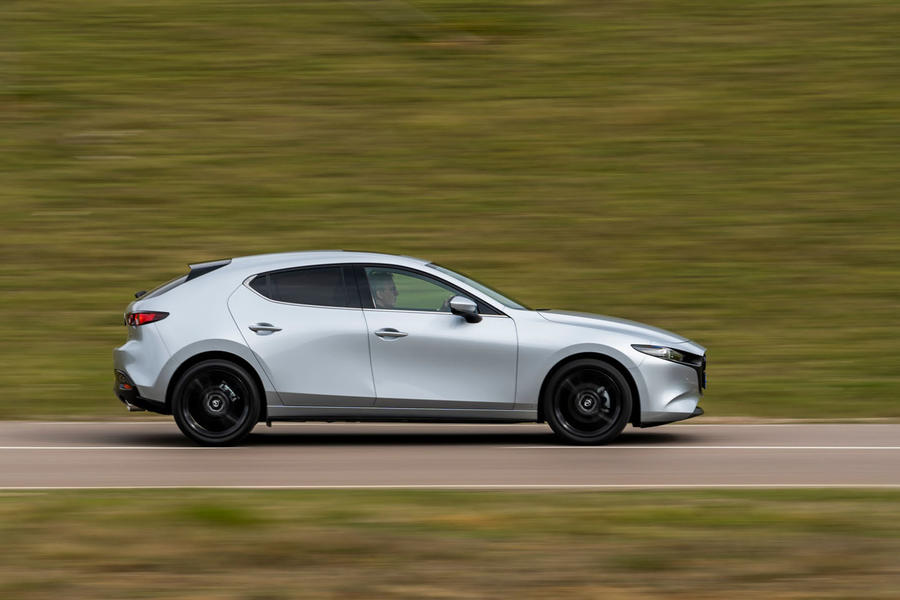 Still great looking; still very pleasant and surprisingly classy to travel in; and still neat, crisp and generally impressive to drive. This has been one of Autocar’s preferred family hatchbacks for a couple of model generations now primarily because it combines appealing styling with a drive that’s very much intended for those who’re interested in what goes on behind the wheel. It’s an ordinary family hatchback at heart, true, and it’s not the cheapest of its kind; but it remains a car you can really enjoy operating on the road, and without accepting compromises in other areas.

The revised SPCCI engine doesn’t change any of that. Just as we discovered in the related CX-30 crossover with the same revised powertrain, it’s a generally well-mannered four-cylinder - and here it’s now well capable of beating a real-world 50mpg on a longer run. It still doesn’t have the ‘who-needs-a-downshift?’ in-gear torque of a turbocharged motor when you’re overtaking on the motorway; but nor would you always really want it to, because some finely polished control weights, and the engine’s improved smoothness and linearity of response through the mid-range, make the car a pleasure to engage with. The slick, light, precise shift quality of the car’s six-speed manual gearbox is a particular highlight.

The hybrid system has been calibrated to cover for the little interruptions and fluctuations to the delivery of torque that result when the engine’s switching between lean compression-ignition running and normal stoichiometric combustion - and it manages that well. There’s just the merest hint of a rough edge to the engine note under light loads to tell you that you’re in SPCCI mode, but anyone who wasn’t listening out for it would be hard pressed to notice. It’s a shame that the crank doesn’t spin a touch more freely at high revs, but there’s good mid-range drivability here, so you needn’t work the engine beyond 4500rpm too often if you don’t want to.

Medium-firm suspension gives the 3 a slightly terse- and clipped-feeling ride over an uneven country road, but typically it’s fluent and seldom agitated or restless. It’s supple and comfortable around town and on the motorway, too, with rougher and more abrasive surfaces bringing just a little bit of a hollow, resonant roar out of the chassis now and again.

There’s a tautness and agility about the 3’s handling that few could fail to notice, but it doesn’t really come at any cost. Steering is predictable, linear and reassuringly well-weighted, so the car is easy to place and intuitive to guide through a corner; it’s eager without being at all imposing. The car rolls as it grips, just as you expect it to, and has well-judged damping and anti-roll bar settings that seem to work just as harmoniously on a heavily crowned B-road as they do around a tight roundabout.

On the inside, the cabin of our GT Sport test car had a slightly monotone but upmarket ambience, and a level of perceived quality to easily stand comparison with premium-brand contenders.

The 3 retains a rotary input device for its infotainment system, and if you don’t like operating a touchscreen at arm’s length, that’s a real plus point. The infotainment system itself is easy to navigate and nicely rendered, and the car’s instrumentation is clear.

Mazda’s new standard-fit sunroof does impact on driver’s head room a little - but it left enough of the stuff for this 6ft 3in driver to be comfortable. Practicality elsewhere is pretty class-typical: no match for a Honda Civic or Skoda Octavia, but reasonable next to a VW Golf or Ford Focus - even if the car’s swoopy styling of the back of the glasshouse does take a bit of a toll on over-shoulder visibility. 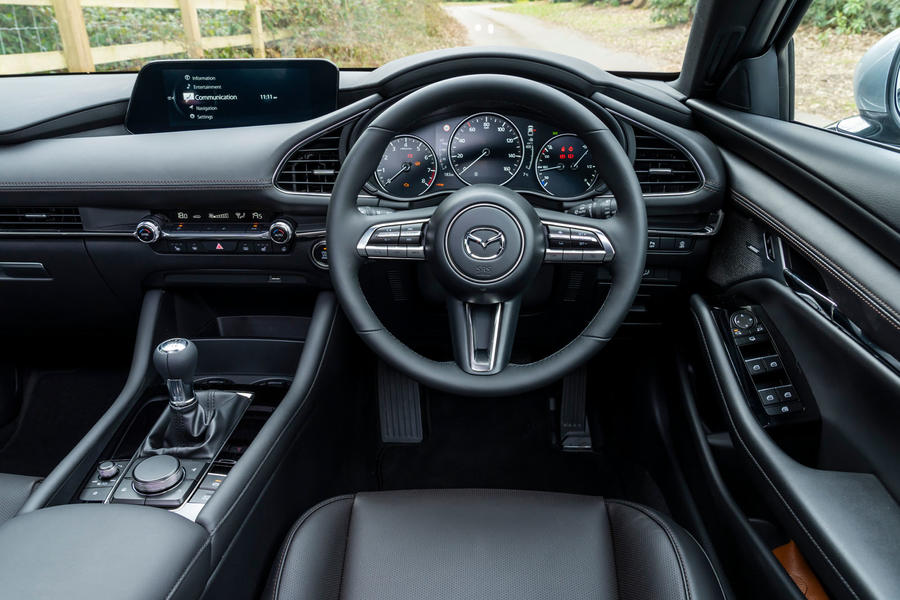 Mazda’s increasingly familiar, equipment-rich pricing strategy means you’ll probably need to consider a 3 alongside VWs, Audis and BMWs, rather than Fords, Seats and Kias; but it also doesn’t skimp on kit, so if you do like a well-equipped hatchback, it might still make sense. Entry-level cars get a head-up display, that smart-looking and well-featured infotainment system, and a host of driver assistance systems as standard. Our test car added heated leather seats, a reversing camera and a Bose premium stereo for no extra outlay.

Even allowing for all that, you’ll probably have to ascribe value to this car’s key strengths to pick it. They’re not really the kind of strengths to stand out on paper in a technical comparison with rivals, either. You’ll certainly see one of the main ones when you first lay eyes on the car, though - and there are plenty more to find from the driver’s seat. 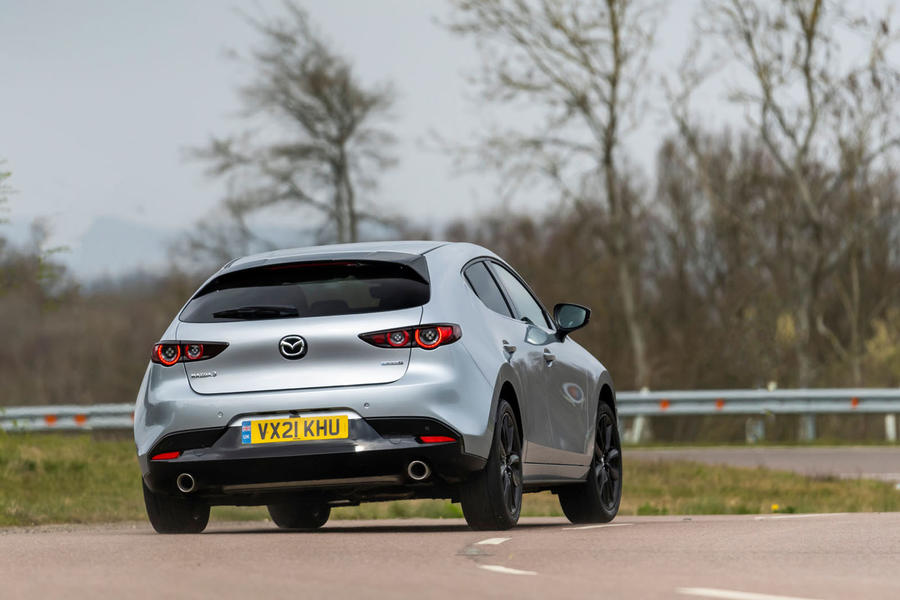 Not my market, but +1 what an amazing looking car I am glad it exists and have no idea why people don't but them by the boat load vs the alternatives.

What a fantastic looking car!

I wonder what the sales figures are like for this model? I like my cars light and airy inside, with good visibility so it doesn't appeal to me, plus the styling makes it looks like it weighs about 3 tons. But Mazda have played a blinder: Those who like a lot of things about the 3, including the interior can be persuaded to put more money Mazda's way and opt for the CX-30 instead.