From £21,8058
Sharp-suited Mazda 3 touches down in UK. It’s got the handling smarts, but a weedy engine holds it back from obtaining class honours
Open gallery
Close

A pretty good reason for the likes of the Ford Focus and Volkswagen Golf to look over their shoulders. The previous Mazda 3 was always a car that sat towards the sharper, more dynamic end of the family hatch market; one that was easily capable of giving the Focus a run for its money when it came to driver enjoyment. Quick steering, a nicely balanced chassis, incisive handling, a slick manual gearbox and fizzy petrol engine played their respective parts in making the 3 one of our favourite - rather than the outright favourite - hatches of the time.

This new fourth-generation Mazda 3, which has now touched down in Britain, has quite a reputation to live up to, then. And considering the fact that it is not particularly likely Mazda will have seriously cocked up the way it drives, first impressions seem very promising indeed.

It has certainly got the looks. In fact, I think the 3 is now one of the best looking cars in its class. Its cabin is a major step up over that of the last one, too, and is also up there near the top of the class in terms of perceived quality. That it is reasonably priced is further icing on the proverbial cake: the entry-level SE-L starts at £20,595.

Initially there are only two engines to choose from: a 114bhp diesel; and the 120bhp petrol motor under the bonnet of our £25,495 range-topping GT Sport Tech test car. A clever new compression-ignition petrol engine - the first of its kind to go into production - called Skyactiv-X will arrive later this year, too. The 2.0-litre engine used here drives the front wheels through a six-speed manual 'box but, in what is now a slightly unconventional move, is also one that does not feature any form of forced induction. As such, you won’t really hear from its modest 157lb ft of torque until 4000rpm.

Suspension is by way of MacPherson struts up front. But unlike the Volkswagen Golf or Ford Focus, the latest 3 still employs a torsion beam at the rear as opposed to an independent multi-link arrangement. 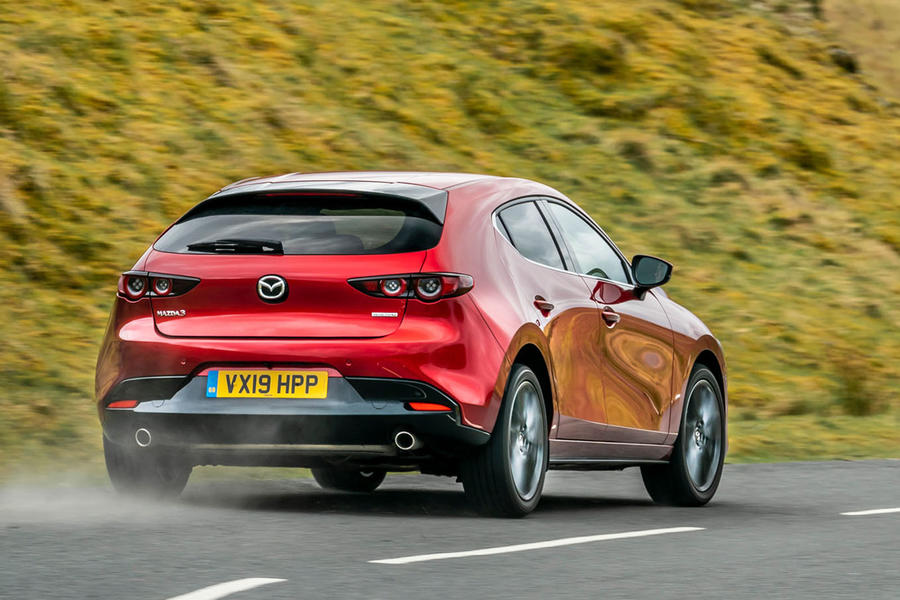 From behind the wheel, really rather classy. Japanese minimalism supposedly played a crucial role in the cabin’s design, and it shows.

The multiple horizontal surfaces of the dash lend it a clean, tidy look; while the small collection of controls for the HVAC system are the only buttons that really populate it. These are far easier to interact with than the large, glossy touchscreens increasingly preferred by other manufacturers, and Mazda should be commended for resisting that growing trend. In fact, the 8.8in infotainment screen atop the dash - which has received a welcome software and graphics update - can’t be controlled by prodding fingers at all. According to Mazda, using these sorts of systems while on the move can lead to the driver involuntarily turning the wheel, so a rotary dial on the centre console provides the sole point of interaction.

In addition to the stripped back design of the cabin, the materials used - particularly on our GT Sport Tech model - really help lend it a more upmarket ambience than what you’d usually expect at this price point. Its leather upholstery, chrome brightwork and glossy black trim see it outclass the Ford Focus, and certainly sit on a par with that of the Volkswagen Golf. Aside from a slight lack of space in the rear, Mazda really has done well in this regard.

For the most part, it’s a fantastic little hatch to drive as well. The steering is light and direct, lending the 3 a distinct sense of agility. Its front end grips well, while its subtle levels of body roll arrive in a gracefully progressive fashion, and it carves through sweeping bends with impressive delicacy and accuracy. It’s at least on the same level as the latest Focus for its ability to entertain on a twisting stretch of road.

That said, the decision to run a torsion beam rear suspension arrangement does lead to a slight compromise in secondary ride quality that you don’t quite get from the Ford or the Volkswagen. This is most noticeable on particularly rough stretches of Tarmac, where the Mazda can feel agitated and unsophisticated. Those two rivals seem more capable of retaining greater composure in such circumstances. This factor is by no means a deal breaker, but the Ford and the Volkswagen both perform better in this regard.

That 2.0-litre engine is a bit of a sticking point, too. It not only lacks the character of Ford’s Ecoboost petrol engines, but also the muscle. The need to rev the engine out to hit peak torque isn’t such a problem, it’s more the fact that when you finally reach 4000rpm it feels as though it’s got nothing to give.

The decision to avoid turbocharging could have worked in Mazda’s favour. After all, doing so forces you to interact more with that fabulous six-speed 'box - a good thing for those who want an involving driving experience. As it stands, though, the pay-off just isn’t there. Still, the cabin is well isolated from engine noise, and the fuel economy is respectable too; a trait no doubt aided by the introduction of mild-hybrid technology. 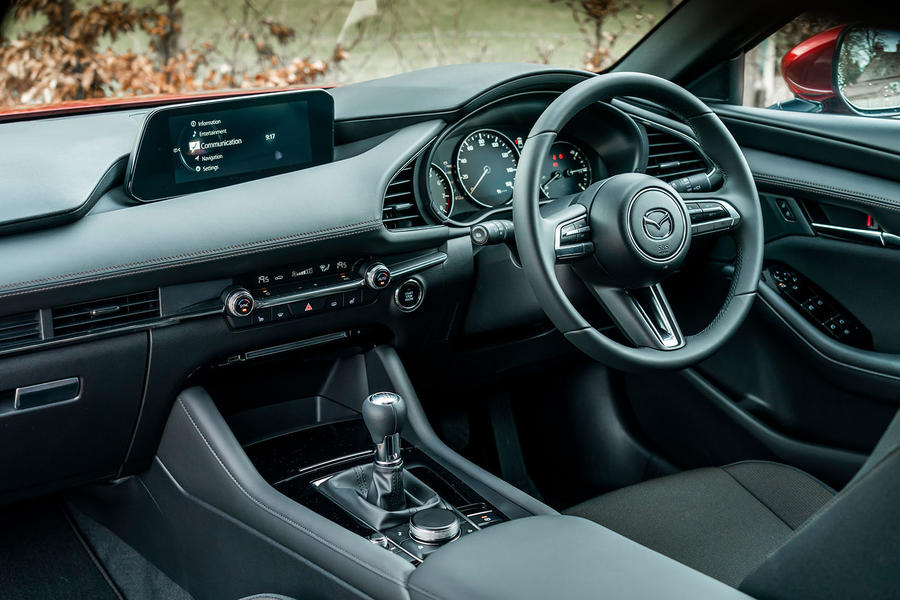 The lack of poke from the motor and an at times rough-edged secondary ride are the only truly noticeable flies in the new Mazda 3’s ointment. It is otherwise a highly likeable car: the slick-shifting gearbox is ace; the driving position is great; the cabin well-finished and attractive; and the handling eager and playful.

While that busy ride is easy enough to ignore, the asthmatic level of performance is tougher to overlook. As it stands, the Volkswagen and the Ford are the two more well-rounded competitors in this class. But with that Mazda Skyactiv-X engine arriving later this year, reportedly with around 180bhp, that could well change. Watch this space. 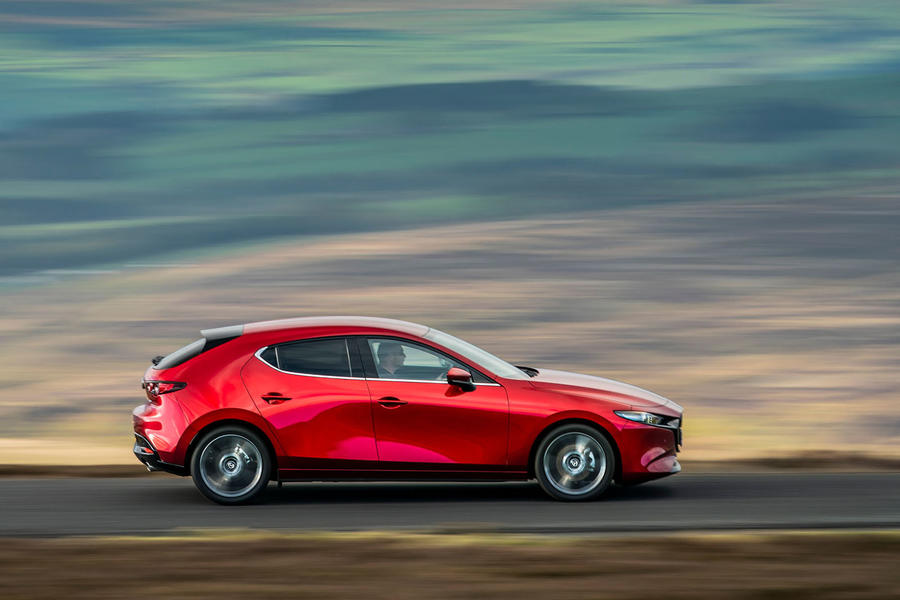 I was allowed a 30 min test drive on the UK launch day last week.  I still really like the styling of the car, even if the rear 3/4 view looks heavy handed.  The quality feel of the interior is a massive step up on all the of Mazda's current range (even the recently facelifted 6) and shows the direction they are heading in.  Although the car only had 120bhp, I found the power available and it's delivery fine for day to day driving. The handling was impressive and fun on the back roads by me; road and wind noise were at a level that I don't remember bothering me when driving on a harsh surfaced dual carriageway.  The black headlining of the GT Sport Tech spec made the interior a little oppressive, I've have to spec one of the brighter interior trims.  Overall I found it to be a very likeable car, but would personally wait for the SkyActiveX or full hybrid options later in this model's lifecycle.

Strikes me as being similar in design  to the original Mk1 Seat Leon. I was disappointed that the opportunity  was not taken to offer the Skyactive X  engine at launch. This review and others have highlighted the " only average " performance of the 2 litre engine. I am looking at the new Mazda CX-30  due in late autumn in the UK with this engine but to date not even my Mazda dealer can tell me when the Skyactive- X engine will be released, even in the Mazda 3.

this thing looks like a mouse tiny front and massive back, do not like it at all.