From £81,7357
Final-run four-seat coupé still has the looks and soundtrack to do justice to the badge, but doesn't make you feel properly engaged in the driving process
Open gallery
Close

This is the final hurrah for Maserati’s ageing best seller, the 2018 GranTurismo, driven here in ‘lightweight’ MC specification for the first time on British roads.

It’s so completely final that you can no longer order one from the factory in Modena. The last GranTurismo has already been built, so you’ll need to hunt through existing dealer inventory to get one. Whether or not you should actually do so is something we’ll come onto in a moment.

First, some background. Eleven years ago, Maserati’s four-seat coupé arrived with a 399bhp 4.2-litre V8 designed by none other than Ferrari. If our eyes and ears were our only instruments of assessment, it would have won every group test it graced — still would, perhaps — but they aren’t and it didn’t. We still liked it, though.

Soon after, a GranTurismo S was launched with a 433bhp 4.7-litre engine, a six-speed robotised manual 'box instead of an auto and stiffer suspension, complete with thicker anti-roll bars. Body control was predictably improved, but the steering was still inconsistently weighted and the ride now a touch fidgety. We nevertheless preferred it to the BMW M6 of the day, the Bangle-styled V10 bruiser whose values will one day surely rocket.

The GranTurismo S was facelifted 2012, borrowing styling cues from a hardcore, deafeningly loud Porsche GT3-style ‘MC Stradale’ flagship model Maserati had previously introduced. The car’s slightly esoteric appeal lingered and it now had a touch more power. Then, last year, the GranTurismo recipe was tweaked for a second time, with the range condensed in a Sport model and the MC variant tested here, both touting the larger 4.7-litre unit with 454bhp put to the road through the rear wheels and the six-speed ZF torque-converter gearbox.

This particular MC has a healthy complement of options. They take a base price of £107,865 to £126,989 and notably include Alcantara headlining for £960, MC aluminium pedals for £420 (you’d think these would be standard), plenty of Sport Line carbon interior trim for £1740 and a carbon-clad steering wheel for £960.

In fact, the carbon fest doesn’t end there. This test car — chassis 272377, if you particularly like the look of it — has no less than three interior carbon packs totalling more than £6000, plus one for the exterior (the most notable beneficiary being the boot spoiler) costing £2280. It’s all of the Italianate high-gloss wide-weave variety, too, that reminds us somewhat of the early 2000s. This tester likes that, but appreciates many won’t. 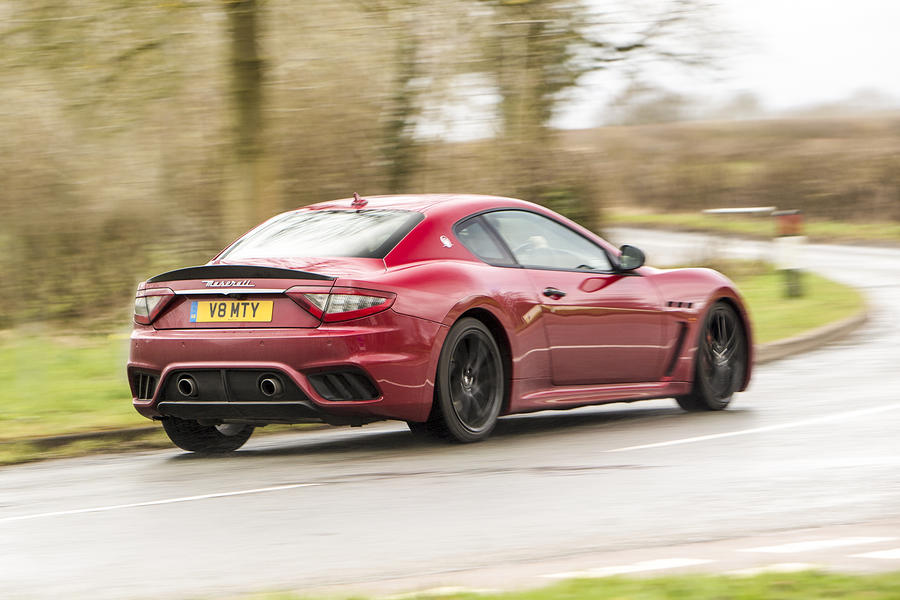 The MC does so very much to whet the appetite. Its wet-sumped 7500rpm V8 still delivers one of the most bewitching start-up routines of any car in production — a throaty crackle, lean but broad and lusciously smooth when blipped — and the bodywork has a predatory elegance that makes you wonder why on Earth Ferrari has severed its ties with Pininfarina.

But it’s not immune to criticism in either respect. Even for a naturally aspirated engine, there’s a conspicuous dearth of torque at middling speeds; such a big car misses turbocharging, and point-to-point the GranTurismo is nothing like as quick as it looks or sounds.

The rear lights also appear to belong to a Mk4 Ford Mondeo and the huge 20in rear wheels somehow look a little lost in their manhole-sized arches. You might blame the latter on the fact that the bodywork essentially rests on a shortened version of the Maserati Quattroporte’s vast platform.

Inside, the car benefits from a reasonably slick new infotainment system that’s low on latency and crisp enough, but the fact that it appears incongruous goes to show how dated the rest of interior has become. There’s also too little adjustment in the steering column and the seats offer too little in the way of support for a 186mph car that’ll hit 62mph in 4.8sec.

Minor qualms aside, if a GT car’s brief is to absorb huge distances then entertain on the technical stretches approaching your final destination, the GranTurismo can still just about cut it. It’s as comfortable at speed as it ever was and, barring a slight wind rustle at the B-pillar, remains quiet enough. Unless, that is, you’re familiar with Mercedes’ church-like S500 coupé. Both cars will obliterate journeys of several hundred miles.

It’s worth noting, however, that there’s no cylinder deactivation, coasting function or any other modern fuel-saving tricks, so the best touring economy you’ll get is around 28mpg. With the 86-litre tank, that’s good enough for a range of more than 500 miles. We averaged 23mpg in mixed driving.

Sweeping A-roads are, on the whole, this car’s friend, but more tortuous stretches ask questions that a near-1900kg chassis and lengthy wheelbase struggle to answer. The MC has a neutral to nose-led balance and develops reasonable grip and traction, but it never feels particularly adjustable and, even with a firm passive damper set-up, body control is lax enough that movements fall a step behind what’s happening at the front axle as you up the ante.

It thus needs to be folded into corners with care, and the linkage between the front contact patches and the palms of your hands too often feels long and indistinct. Maserati will also need to address the speed of the rack (hydraulic, for now) if the upcoming Alfieri is to cut it as a convincing driver’s car, while the brakes will need beefing up, too.

On British roads, the MC copes well — the primary ride is just fine — but has a tendency to exaggerate the effects of potholes and worn-out surfaces. In particular, sharp impacts at the front are transferred through the body of the car and seem to also unsettle the rear. 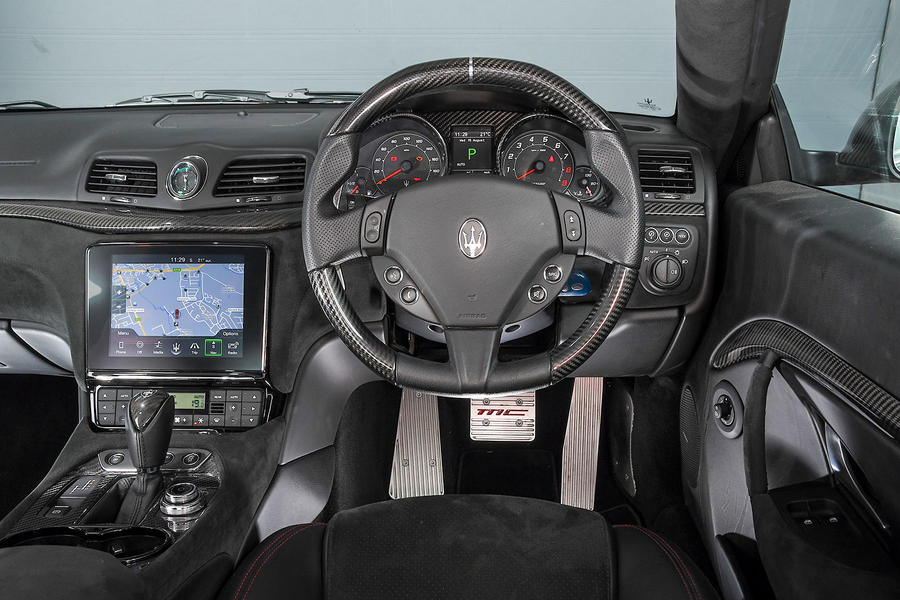 Buying a new GranTurismo at this concluding stage in its life would be a statement of your priorities, that’s for sure. If you want to go fast, many rivals do that better, and if you want to feel properly engaged in the driving process, the GranTurismo falls short in this regard as well.

There is romance, though. A Ford Focus RS will drop you by the first corner, but you’ll look and sound fabulous in defeat. In fact, it’s difficult to foresee a time when this car won’t look and sound fabulous. It feels a bit timeless, particularly in Rosso Trionfale shade, and that will appeal to those who don’t have to have the latest of everything. More power to them.

Alas, this isn’t our sister Classic & Sports Car magazine. If we needed similarly spacious rear seats to those in the GranTurismo, we’d find the funds required to buy a Bentley Continental GT, and if we didn’t, it’d be Aston Martin’s Aston Martin Vantage or V8 Aston Martin DB11 we’d turn to. And if we wanted a fabulous atmospheric engine? Well, that one’s a bit harder. 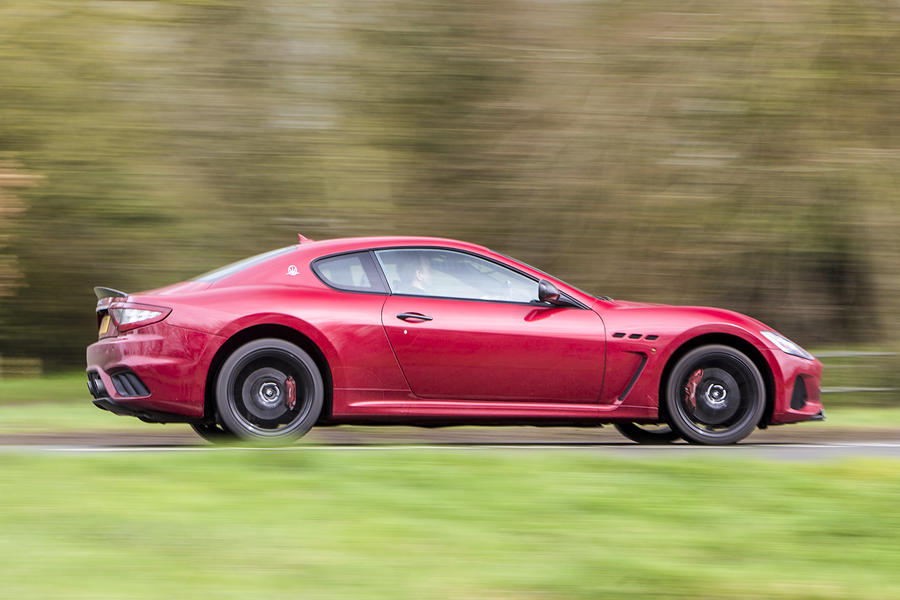 Wanted a GT car that could fit a baby seat and this fits the bill. Alternative would be a Bentley gt but that's almost twice the price at present.

Really like the latest restyle especially on the Mc with its ventilated front arches etc. which is the version I bought.

New infotainment brings it to be more modern inside but you can still see its age in parts. Think they have done a pretty good job of integrating the new screen when you sit in it it does not look out of place.

Like the article said, not made any more so stick limited to last of the dealer specced stock. Some have more than others but of the mc there are just a handful

Yes, I’ve only seen two or three, but as average as it must be compared to its price band, it’s still a nice shape, different to the other Sheep we see from Mercedes and Jaguar and Porsche.

I drove one of these this morning, actually, which I bought nearly new from Graypaul Maserati Nottingham.

I adore it, I'm on my second one, and this new one is even better still, now it has Apple CarPlay etc etc. It's still one of the best sounding sports cars in the world, in my opinion, the way it howls and screams when you accelerate is so addictive I can't tell you.

There's lots to be said about Maserati main dealers, but my experience with Nottingham has been nothing short of sublime.

If you're in the market for a sports car like this and want to stand out a bit and want more back-to-basics motoring, you've absolutely got to take a test drive. Deals are definitely to be had...