From £41,9407
Lexus has updated its RX flagship SUV in a few key areas - but is it a hybrid that can capitalise on the move away from diesel?
Open gallery
Close

More relevant than ever, that’s what. The Lexus RX has always passed under the radar a bit in Europe – where the German establishment dominates the large SUV sector – but it’s one of biggest sellers in its class in the US. And, with rivals rushing hybrids to market at a pace, Lexus' well-proven parallel hybrid system should get more of a look in.

The age-old hurdles remain, however. One reason we’ve generally given Lexus hybrids a lukewarm reception in the past is that an equivalent diesel model is often faster, nicer to drive out of town and more readily capable of better economy. That statement hasn't changed just because buyer attitudes are starting to shift.

Even so, while other makers scurry to make plug-in hybrids - models capable of impressive economy but only if charged up via a socket regularly -  the simple and durable parallel hybrid system (dubiously dubbed “self-charging” by its marketeers) offers up a less complex route away from pure internal combustion.

While the powertrain hasn't undergone any changes in this round of mid-life revisions, there are some very small external tweaks. The F-Sport model we're testing gets a smattering of sportier design touches, including headlights with a new 'bladescan' adaptive LED system that uses spinning mirrors to direct the pattern of full-beam light away from road users.

Inside, there’s not a huge departure visually, but the touchpad-controlled infotainment system is also now operable via a touchscreen. There’s Apple CarPlay and Android Auto for the first time, too, while the suite of safety systems swells a bit. A selection of chassis tweaks also feature. 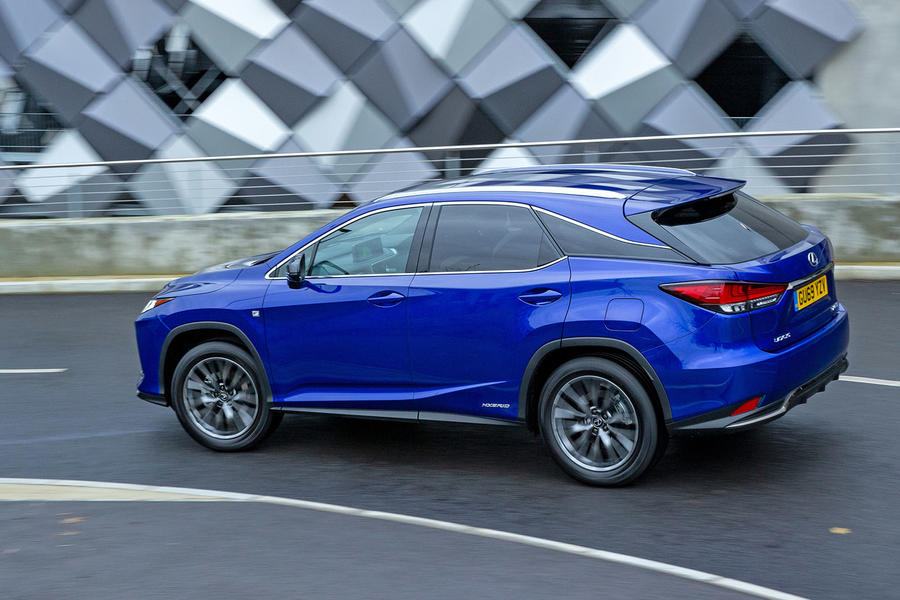 Step inside and, if you gloss over the giant infotainment screen plonked on top of the dash, the RX looks and feels a generation behind the Germans. That doesn't necessarily have to be the a bad thing, though. Clinical minimalism isn't the theme here; the architecture is complex and there are buttons for everything, everywhere. It’s not exciting or particularly on-trend, but exemplary build quality and plush materials make it feel special.

Yet this is not the antidote to fiddly touchscreens that some might be looking for. Yes, there’s lots of buttons, but most are for the heating and climate functions (including controls for the heated and ventilated seats). You’ll therefore find yourself interacting more with the screen which, although bigger and clearer than before and now moved closer to the driver, still requires that you lean right in and take your attention off the road to prod. The infamous Lexus trackpad (replacing the horrid old mouse-style controller) doesn’t solve that - it’s still far trickier to operate on the move than a rotary click wheel, a la BMW.

You’ll have no complaints about the extremely generous kit tally in this F-Sport model, however, and oddment storage is plentiful, as is space for four burly adults (or five for short journeys) and their luggage. Though it’s no Land Rover Discovery or Volvo XC90 in terms of outright versatility, it isn’t meant to be; the seven-seat RX L takes that mantle. Although having said that, we also had the RX L in for test and found that its third-row seats are best considered occasional. 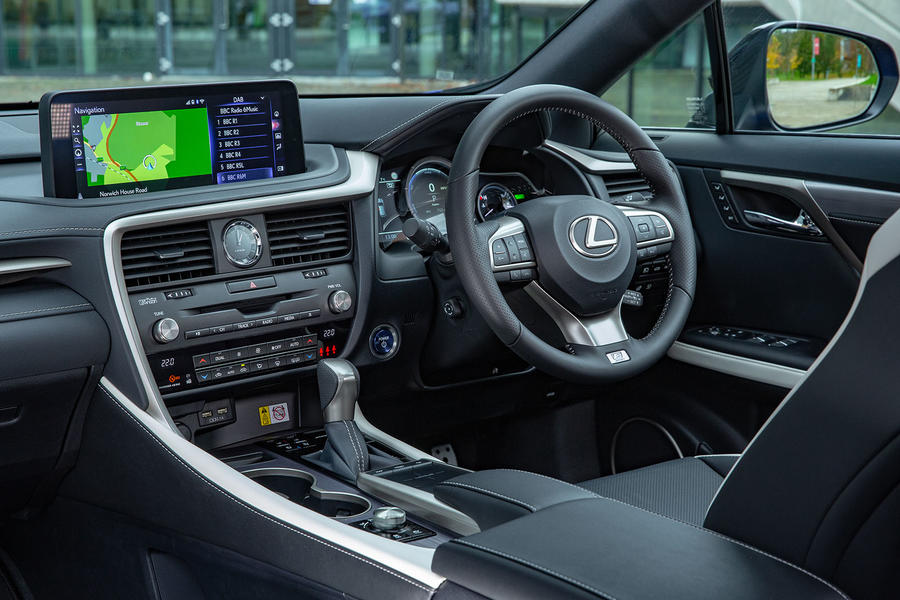 So far, so respectable, but we’ve always had a bugbear with the narrow window in which Lexus’ hybrid system provide a significant benefit over a traditional powertrain. Gentle, about-town cruising is where it’s most satisfying, where the seamless CVT transmission, limited EV-only mode and the car's general smoothness are shown in the best light.

It’s fine once up to speed, too, but getting there briskly still involves a fair bit of din as the naturally aspirated V6’s revs flare up and stay up. At least it’s a much more pleasant note than the strained-sounding four-pots found in lesser Lexus hybrids.

Performance is ample enough, if hardly sparkling, and compared to rivals’ effortless, torque-laden six-pot diesels, it makes a bit of a meal out of overtaking and motorway inclines. Whether the 30-35mpg it’ll deliver in mixed driving justifies the sacrifice is debateable, too, but you would be looking at significantly lower economy than that for a non-hybrid petrol.

Frankly, it all feels a bit old-school if you’ve spent time in any equivalent plug-in hybrids, especially when you find yourself winding up other motorists by crawling away from junctions in a desperate attempt to keep it in electric mode. But, with no need to charge it up, this is at least a zero-faff hybrid that delivers consistent MPG.

Elsewhere, though, the RX is more dynamically capable. New hardware including stiffer anti-roll bars and new shock absorbers combine with body rigidity improvemens and an optional, roll-reducing Active Cornering assist system. While this might ring alarm bells, the ride hasn’t become choppy as a result: unlike its lumpy riding NX sibling, this is still a surpremely comfortable way of moving about the place.

Handling is a bit more incisive now, too. The steering feels direct and consistently weighted, combining with reasonable grip levels and tidy body control for a two tonne-plus SUV. Don’t get me wrong, you won’t be abandoning the wife and kids on a Sunday afternoon to thread it down a B-road, but it’s entirely as good as a car of this type needs to be, if not quite the class dynamic benchmark.

If you’re resolutely determined not to buy a diesel, and a PHEV or EV doesn’t yet work for you, the RX is a decent left-field buy that’s all the better for its updates. It’s distinctive, likeable, comfortable, refined when you’re not clogging it and loaded with standard kit. The very fact it's *not* German, and never feels as such, will be enough for it to appeal to some.

But it still doesn’t offer up enough to persuade us that it’s a better all-rounder than something like a BMW X5 30d, which is a bit more fuel-efficient, more refined and offers significantly better performance at any speed. The public may be turning its back on diesel, yet it remains the most effective and efficient method of propelling a big SUV for long distances.

The RX’s ace card when compared to plug-in hybrids is its relative value - it’s several thousand pounds cheaper than an Volvo XC90 T8 or an X5 xDrive45e. Is that enough given those cars' far broader range of talents? We’re not convinced.

Self charging hybrids is a

Self charging hybrids is a fair description I'd say, without overcomplicating it, and I have had great experience with Honda's ima and would expect toyota/Lexus'to be even better.
You always read on these articles about the high revving CVT, I never had an issue with it, but then I never and still don't floor my car all the time, if you lift very slightly the CVT will allow the revs to drop, yes a diesel is often quicker but the hybrids have always polluted less and been more refined and quieter in normal driving. I've always maintained that if you do drive mega miles or tow then a diesel is definitely for you, otherwise a hybrid works really well.
Horses for courses, but I'd always choose hybrid over diesel, or just a smaller petrol.
This doesn't look old to me inside, still looks thoroughly modern, just Japanese as opposed to German.
xxxx 29 November 2019

Award for the biggest C pillar goes to

The new Mazda 3 must run it

The new Mazda 3 must run it close!    Still can't really get to like the Lexus "design language".

Huge isn't it, not sure on the style element of it either.

Missed opportunity here from Lexus, where they were once leading with hybrids they are now sadly lacking. With people leaving diesel in their droves a plug in or full electric model would be more advisable than their poorly marketing self charging label. The competition are now surging ahead whether it be Volvo, Audi, Mercedes etc with PHEV that can deliver much better economy than 30-35 mpg, Lexus need to get themselves better long term business strategists or they could be in trouble....

Don't have a clue what you

Don't have a clue what you are blabbing on about, this car outsells all the others in the states for its class particularly the German brands because it wipes the floor, walls and ceilings in terms of it's long term build and reliability, you only have to look at JD powers to gauge that.

If I had to keep a car for up to 10 years with my own hard earned money nothing else would get a look in.

Laughable long term tests lasting only 6 months in this rag make me laugh out loud.