From £70,3296
New flagship saloon from Lexus provides a luxury interior to rival the best but comes up short due to its hybrid powertrain
Open gallery
Close

Had you in 1989 asked the senior Lexus executive in the UK to predict annual sales of its flagship LS model five generations and 18 years later, he’d have come up with a number larger than 100.

But that’s how many of these new LS500h Ewan Shepherd, the man who does that job today, reckons he’ll shift in 2018. To be fair, sales only start on 2 January and there will be an inevitable ramp up, but he says no more than 150 units will be coming this way even in a full year. In the same time, Mercedes-Benz will shift 2500 S-Classes.

The LS has always struggled here, the best volumes hitting around 400 in 2007 just before the crash. The injuries have been self-inflicted in part – refusing to offer a diesel engine denied it the vast bulk of prospects – but it has also fallen victim to a nation of badge snobs that we are.

This all-new LS does not seek to change its tune because it’s far more successful in less traditionalist markets, but it has been re-recorded and mixed with a decidedly more upbeat groove. Lower, wider and longer, the styling is far more adventurous – borderline funky, in fact - and comes with uncommon presence and an almost fanatical devotion to detail. That ‘spindle’ front grille has 5000 surfaces and took one stylist 14 weeks of solid work to design, after which I’m guessing he or she had to go and lie in darkened room for almost as long again. 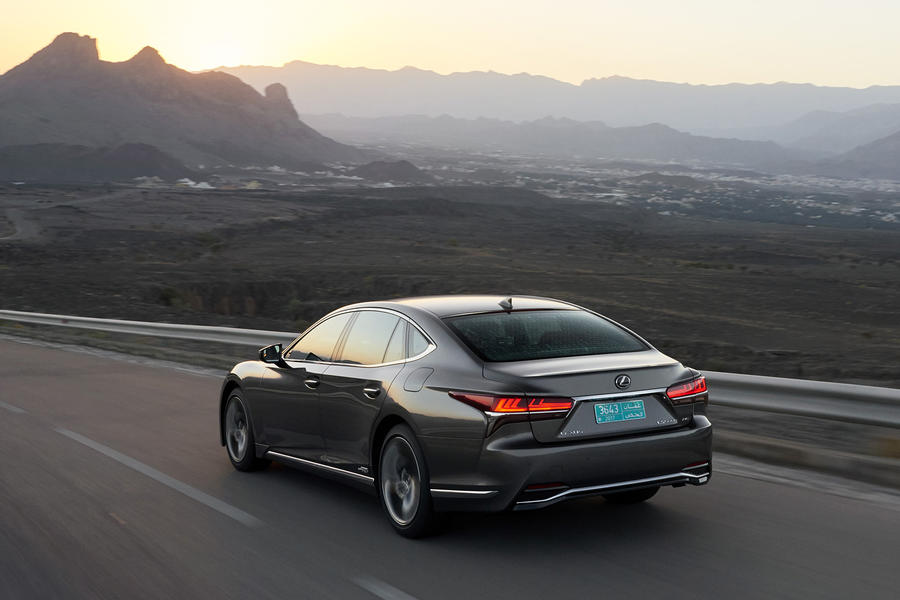 I really like its appearance and most elements of its striking cabin design. It looks both luxurious and modern, which is both a difficult and neat trick to pull. Moreover, the top-of-the-range four-wheel-drive ‘Premier’ model I drove was full of quite exceptional materials, even in those areas only a journalist might choose to push and prod – the inside of the door bins, for instance. In design terms, this is a proper job.

In other areas, its abilities are more sketchy. Far more sketchy, in fact. I worried that in both the official blurb and presentations, the actually nuts and bolts of the car – the powertrain, chassis and construction materials – were pretty much the last things to be mentioned. Hierarchically, the fact you can order interior door facings covered in leather quilting folded according to ancient origami tradition appeared to be more important. And don’t get me wrong, it’s a great material and fabulously executed, but neither that nor that they’ve managed to present wood in a way wood cannot present naturally should really come before things like, er, the engine.

Which is a 3.5-litre V6 developing 295bhp without the aid of turbochargers, but boosted by a hybrid system to produce a ‘total system output’ of 354bhp. It powers either the rear or all four wheels suspended at each corner by multi-link suspension units.

And I’m afraid my fears were largely confirmed. There is a lot of theatre when you approach and board the LS: the door handles illuminate, puddles of light appear beneath the mirrors, the seat belt presents itself and even its holder extends by 50mm to receive the buckle. The seat can adjust itself in 28 ways and offer a range of massage functions from ‘stretch’ to ‘Shiatsu’ and five levels of strength. The interior is not just attractive, it’s fascinating – layer after layer of full-width metal strips splitting the dash from door to door. If ever a car made a promise about the experience to come, this is it. But the car itself fails to deliver.

The most obvious problem is the engine, which has to work far too hard to cart the immense weight of the LS from place to place. In the specification I drove, it weighed 2420kg, almost half a tonne more than the new Audi A8 when fitted with a similarly powerful V6 motor.

If this were a sonorous V12 or even against a thoroughly refreshed a thundering V8, you might not mind too much, but it’s a coarse V6 that develops maximum torque at a sky-high 5100rpm, and not even ten gear ratios (four real, six virtual) can disguise the fact. On a steady motorway incline, it would at times have to rev to over 4000rpm to maintain progress, and it’s not shy about voicing its displeasure. It’s a shame to say it but, when all the mainstream alternatives have quiet turbo engines offering massive thrust from barely more than idling speed whether they be powered by petrol or diesel, this normally aspirated V6 is nothing less than inadequate for a car whose prices only start at £72,595 and extend all the way up to £97,995.

In other ways, it feels more as you’d hope a flagship Lexus to be: the ride quality on air suspension (standard on all bar the entry-level model) meets the expectations of its class and, while it’s not remotely fun to hustle, nor is it in the least unpleasant, proving accurate and quite composed in long fast corners.

Even so, when you delve deeper into those areas in which such a car needs to excel, it comes up surprisingly short. Who’d have thought, for instance, that a car that must surely be hoping for chauffeur sales would actually offer barely adequate rear headroom? At 6ft 3in, I’m tall but no freak, but what little is left of my hair brushed up against the headlining. And I’d hoped Lexus would have taken the opportunity to ditch its mouse mat-based operating system: I’ve encountered it and its relatives in other Lexuses and after many hours further exposure came not one whit closer to being able to operate it fluently, let alone actually liking it.

The result is a car whose designers appear to have been given near carte blanche to express themselves even if it means, as it often does, such freedoms come only at the cost of compromised engineering. In this case, function has followed form at an inadvisable distance.

Its bigger problem is that it enters the marketplace ranged Mercedes-Benz S-Class, by far the best Seven Series BMW has ever produced and a brand-new, very effective Audi A8. And I can only conclude that by far its greatest appeal will be to the minority who rail against the predictability of these German saloons. It is an iconoclast’s car, an exception to a long and thoroughly tested rule. 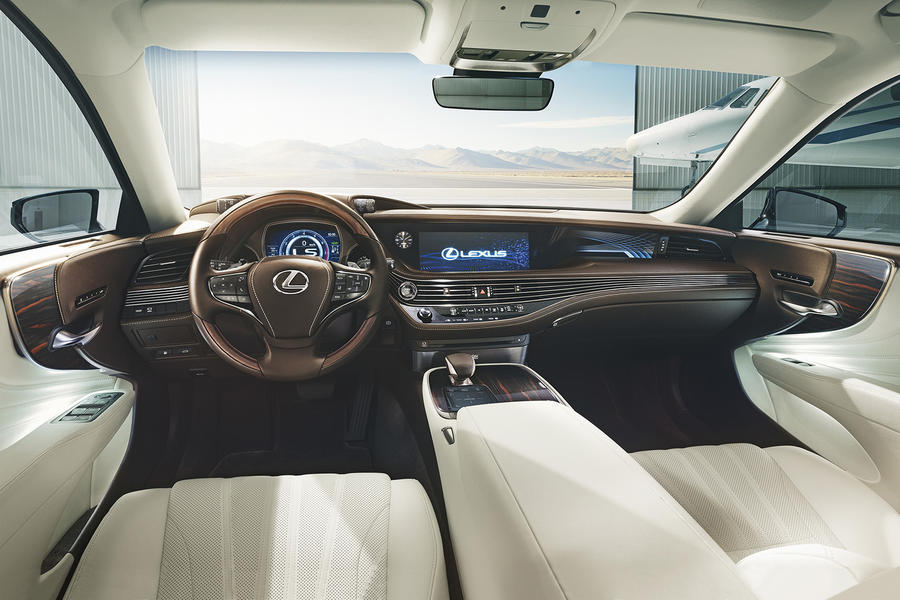 For myself, I liked the fact that Lexus has tried to do something genuinely different here and create a thoroughly modern, distinctive and attractive luxury saloon. And it has succeeded.

But when it comes to cars that must transport a number of people over long distances, style is almost always a poor substitute for substance, and this is where the likeable but far too flawed LS500h comes substantially unstuck. The packaging is not good enough for such an enormous car, it is too heavy and too difficult to operate. But it is the engine that is its undoing: bluntly, it has no place in a car like this. Over a genial chat with its deputy chief engineer Shinji Kishida, I asked him why the hybrid system was not available with the twin-turbo V6 fitted to cars sold outside the UK. And he replied that the engine was new and there’d not been time to integrate the hybrid. When I asked him if that was work in progress, he grinned from ear to ear and simply said: "That’s a secret."

Such an engine, far more refined in character and flooded with low-down torque as it would undoubtedly be, could genuinely transform this car. But I can report only as I find and, as it stands, the LS500h promises more than it delivers. Five generations on, I’d hoped for more. 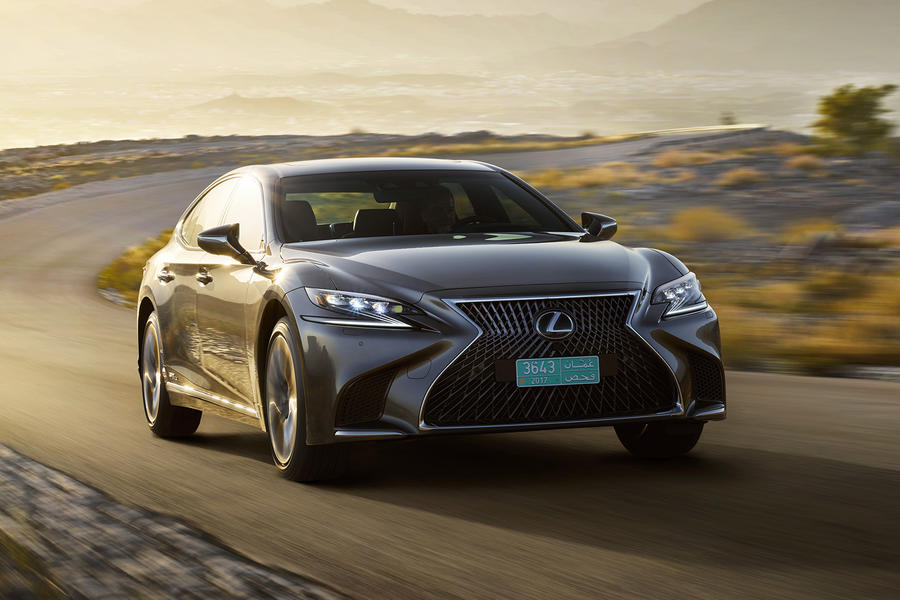